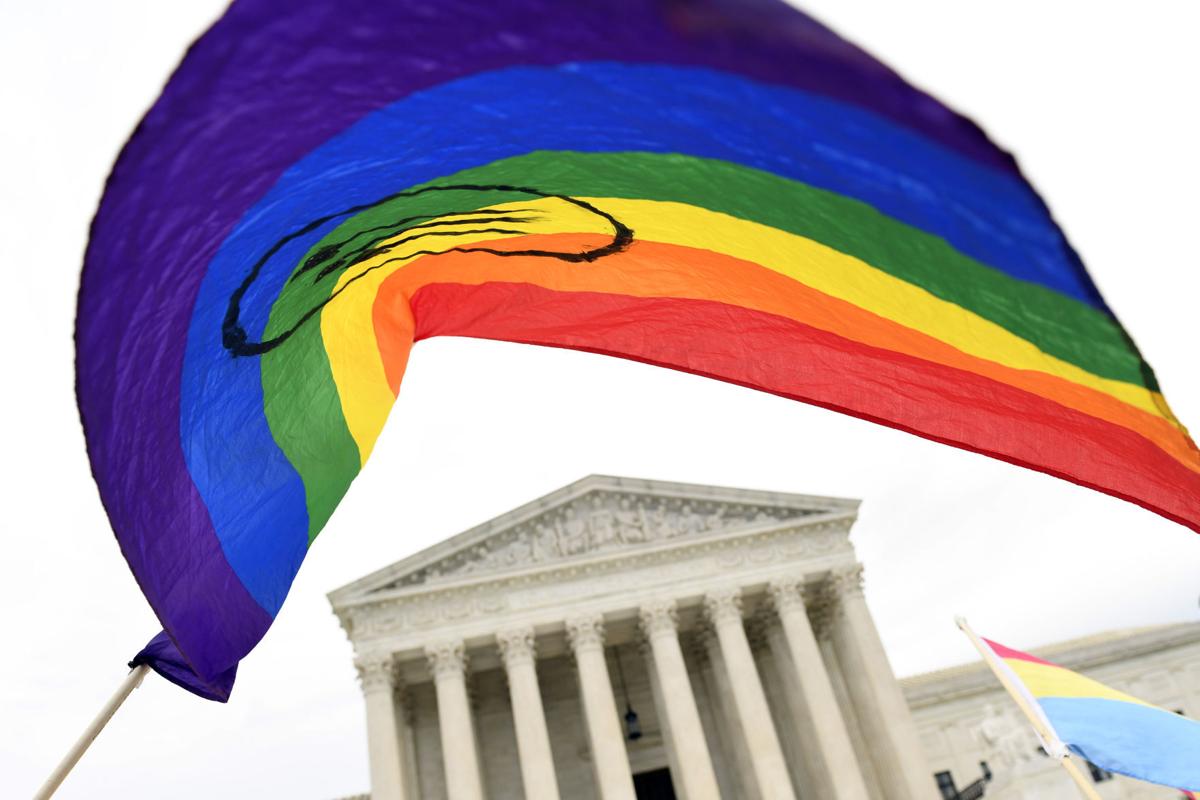 In this Oct. 8, 2019, file photo, protesters gather outside the Supreme Court in Washington. Legislation that would create new protections for LGBTQ Americans is stalling out in the U.S. Senate. Democrats were hopeful they could pass the Equality Act this year since they control Congress and the White House. 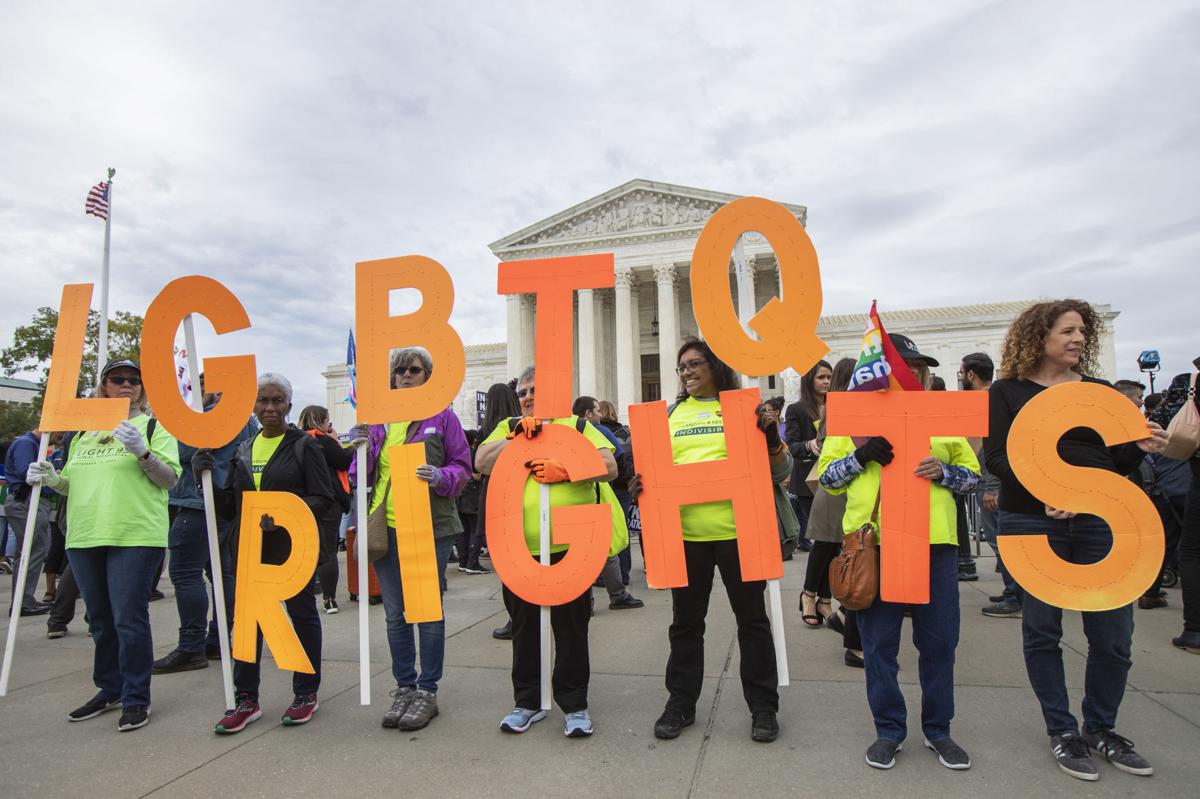 In this Oct. 8, 2019, file photo, supporters of LGBTQ rights hold placards in front of the U.S. Supreme Court on Capitol Hill in Washington. 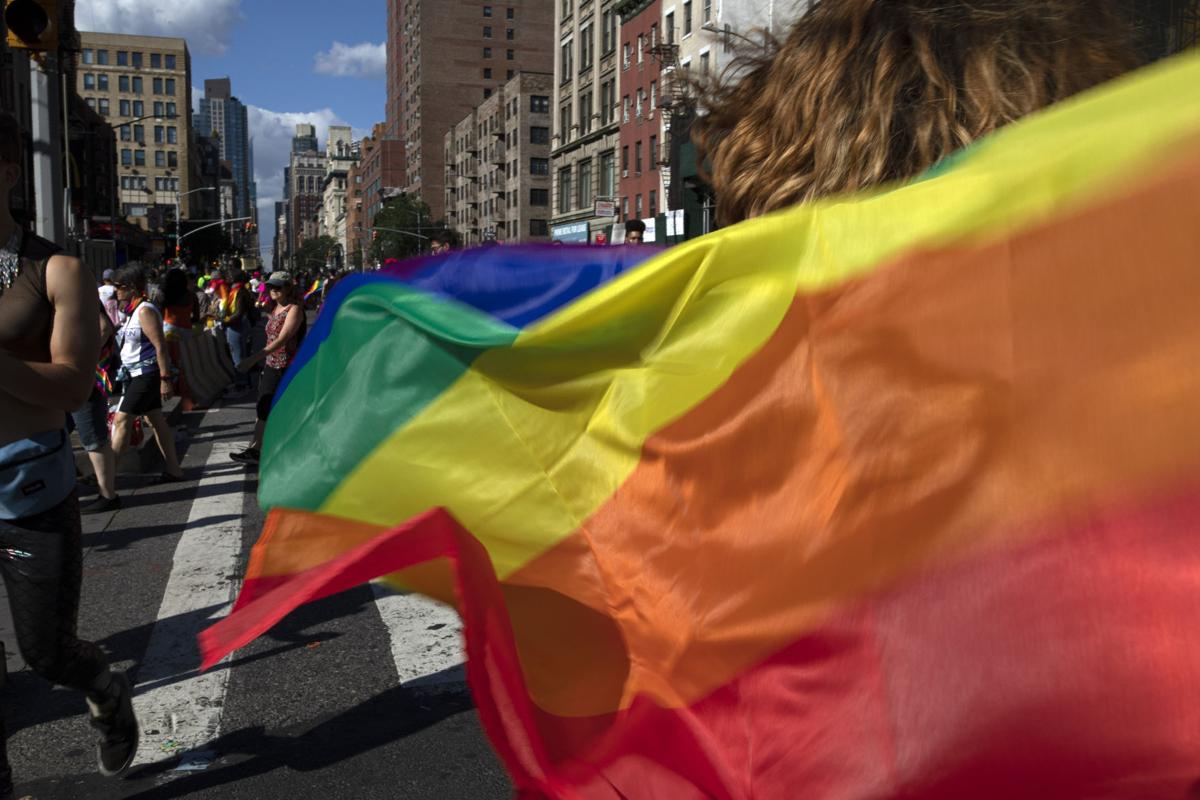 In this June 30, 2019, file photo, parade-goers carrying rainbow flags walk down a street during the LGBTQ Pride march in New York.

In this Oct. 8, 2019, file photo, protesters gather outside the Supreme Court in Washington. Legislation that would create new protections for LGBTQ Americans is stalling out in the U.S. Senate. Democrats were hopeful they could pass the Equality Act this year since they control Congress and the White House.

In this Oct. 8, 2019, file photo, supporters of LGBTQ rights hold placards in front of the U.S. Supreme Court on Capitol Hill in Washington.

In this June 30, 2019, file photo, parade-goers carrying rainbow flags walk down a street during the LGBTQ Pride march in New York.

WASHINGTON — Controlling Congress and the White House for the first time in a decade, Democrats were hopeful that this would be the year they finally secured civil rights protections for LGBTQ Americans.

Then came a new debate over women’s and girls sports.

Legislation that would add sexual orientation and gender identity to the Civil Rights Act of 1964 is running aground in the Senate, partly knocked off course by the nationwide conservative push against transgender participation in girls and women’s athletics that has swept state legislatures, including in West Virginia and Ohio, and now spilled into the halls of Congress.

Democrats are frustrated by the shift in the debate, saying there’s ample evidence that the Republican claims are false and overblown.

The International Olympic Committee has allowed transgender athletes to compete for years under specific parameters, and, to date, there have been no known transgender women compete in the Olympics. Only one known transgender woman has competed at the Division I level in the NCAA. And though legislators in around 30 states have introduced legislation to ban or limit transgender athletes from competing on teams that align with their gender identity, few lawmakers have been able to cite specific cases in their home states where it became an issue.

“We are waiting for this avalanche of problems,” said the chair of the Senate Judiciary Committee, Democratic Sen. Dick Durbin of Illinois, characterizing the Republicans’ argument. “They haven’t really surfaced.”

But Republicans are unyielding in their opposition to the legislation, spurred on by conservative groups who are pushing anti-transgender laws nationwide. With no Republicans signed on, for now, Democrats are unlikely to win the 60 votes needed to pass the Equality Act, potentially putting the issue in limbo indefinitely.

“It’s very discouraging, but in many ways not surprising, that Republicans are so focused on the trans community to build up opposition,” said Rep. David Cicilline, D-R.I. He called the GOP arguments over sports a solution in search of a problem.

Sports are just the latest front in the decadeslong GOP culture war over LGBTQ rights that has focused increasingly on transgender Americans since 2015, when the Supreme Court legalized same-sex marriage. Conservative groups including The Heritage Foundation, Family Policy Alliance and the Christian legal network Alliance Defending Freedom have been engaged for much of the past two decades in advocacy against the LGBTQ rights movement. An earlier push by those groups to enact laws requiring transgender people to use public bathrooms corresponding to the sex on their birth certificate sputtered amid backlash.

Republicans contend the Equality Act would open the floodgates for transgender girls and women to play on female sports teams and hurt others’ chances to compete. While the bill does not explicitly mention sports or touch Title IX protections against sex-based discrimination, they say extending the protections to gender identity would eliminate “private spaces” for cisgender women, including sports teams.

They have repeatedly pointed to one example in Connecticut, where two transgender high school runners won several championships. A lawsuit filed by the runners’ teammates was recently thrown out.

“I have to say, as the father of two young girls, that girls sports has had a profound impact in their lives,” Cruz said at a hearing on the bill.

“The discipline, the teamwork, the camaraderie, the competitiveness that girls sports teaches is effectively destroyed from this bill.”

On the state level, Idaho passed its law banning transgender girls from participating in female sports teams last year, and more than 20 states have considered such proposals this year. Bans have been enacted in Alabama, Arkansas, Mississippi, Tennessee and West Virginia. Florida lawmakers passed a bill, and South Dakota’s governor issued an executive order.

Ohio last week became the latest state to take up the contentious debate when Republican lawmakers introduced two bills, titled the Save Women’s Sports Act, that would require schools and higher education institutions in the state to designate “separate single-sex teams and sports for each sex.”

Christiana Holcomb, a lawyer with Alliance Defending Freedom, contends that the national Equality Act would supersede Title IX “and force vulnerable girls to share intimate spaces with men who identify as female.”

GOP opposition to the bill goes beyond sports, however. Republicans have stalled earlier iterations of the legislation while making different arguments, including that it would infringe on religious freedom.

Democrats say that none of those objections hold weight and that it’s long past time to make clear that the nation’s civil rights laws explicitly include sexual orientation and gender identification. Passage of the law would outlaw discrimination in employment, housing, loan applications, education, public accommodations and other areas, as it did for women and racial minorities in an earlier era.

President Joe Biden pushed for the bill in his address to Congress last month, speaking directly to transgender Americans “watching at home, especially young people, who are so brave. I want you to know, your president has your back.”

The lead sponsors of the bill, Democratic Sen. Jeff Merkley of Oregon and Cicilline, say they know they have work to do. Merkley says he is working with Republicans and civil rights organizations “to find a path forward that will bring senators together behind a vision of full equality for LGBTQ Americans.”

The legislation has support from the Women’s Sports Foundation, a group that has advocated for women’s and girls sports for more than 40 years. The group says the GOP narrative on transgender athletes is a distraction from more important issues, including pay inequity and the harassment and abuse of female athletes.

“Let us be clear — there are many real threats to girls’ and women’s access and opportunity in sports,” the group said. “However, transgender inclusion is not one of them.”

Many of the state legislators who have pushed the bills to ban transgender girls from competing on girls sports teams couldn’t cite any local examples, according to a review by The Associated Press in March. The AP reached out to two dozen state lawmakers sponsoring such measures as well as the conservative groups supporting them and found only a few times it’s been an issue among the hundreds of thousands of American teenagers who play high school sports.

Stella Keating, a 16-year-old transgender girl from Washington state, testified to the Senate that she wanted to join her school’s bowling team because her friends were on it.

“I can tell you that the majority of transgender people who join sports just want to hang out with their friends,” Keating said. “And that’s basically it.”