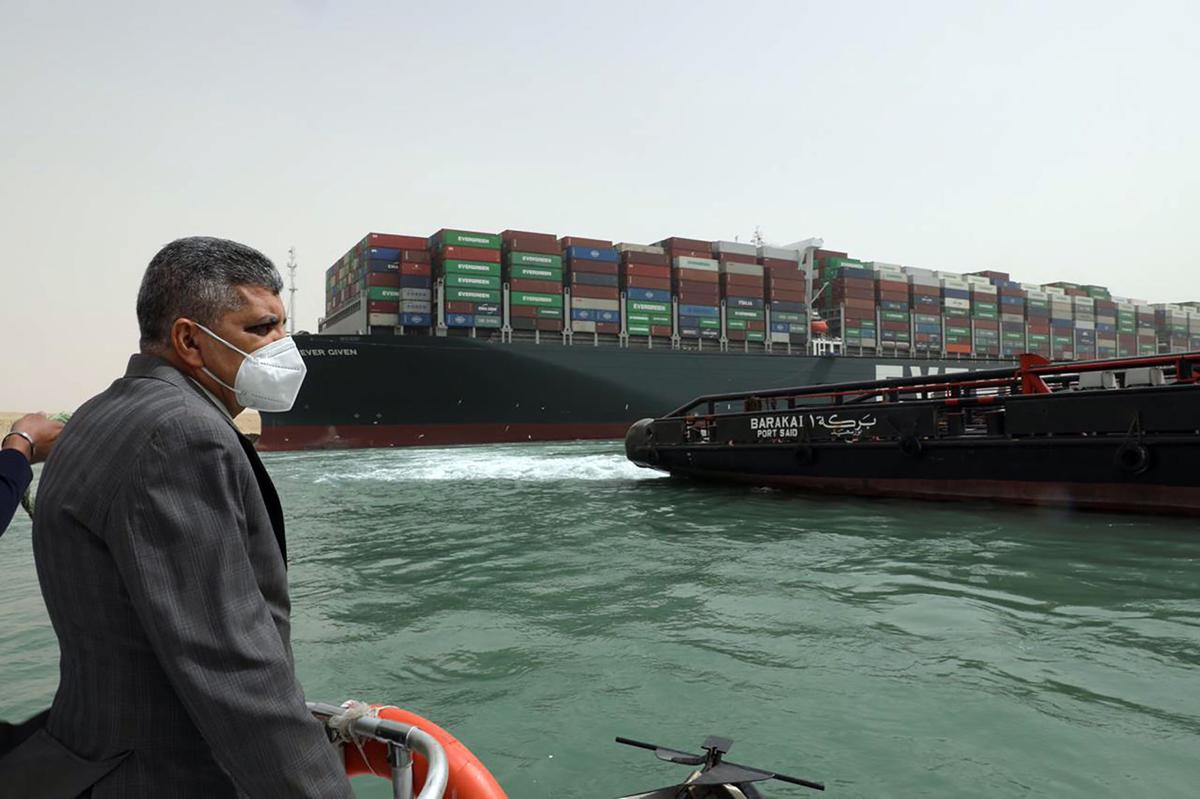 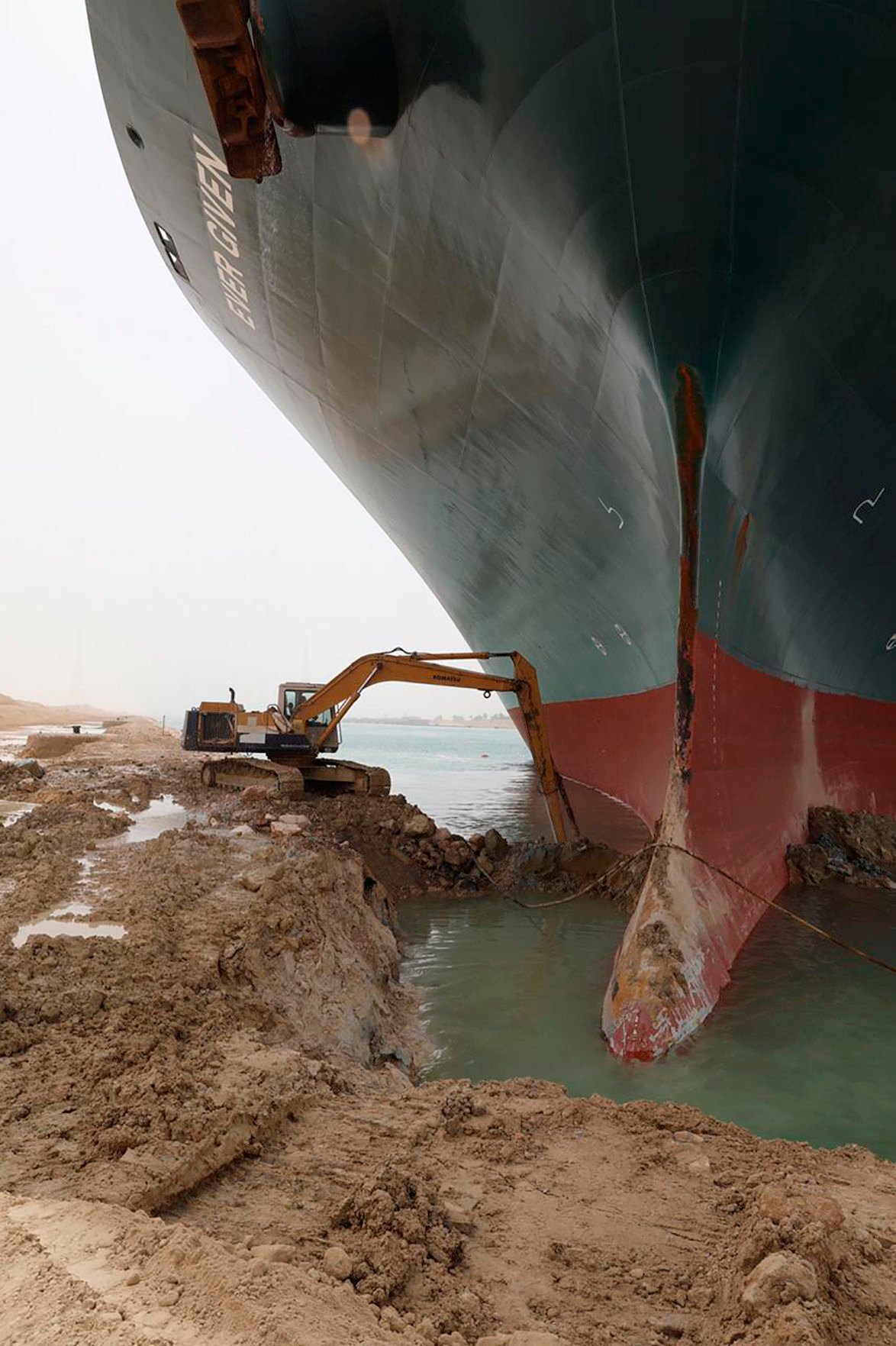 This photo released by the Suez Canal Authority on Thursday, March 25, 2021, shows a backhoe trying to dig out the keel of the Ever Given, a Panama-flagged cargo ship, that is wedged across the Suez Canal and blocking traffic in the vital waterway. An operation is underway to try to work free the ship, which further imperiled global shipping Thursday as at least 150 other vessels needing to pass through the crucial waterway idled waiting for the obstruction to clear. (Suez Canal Authority via AP) 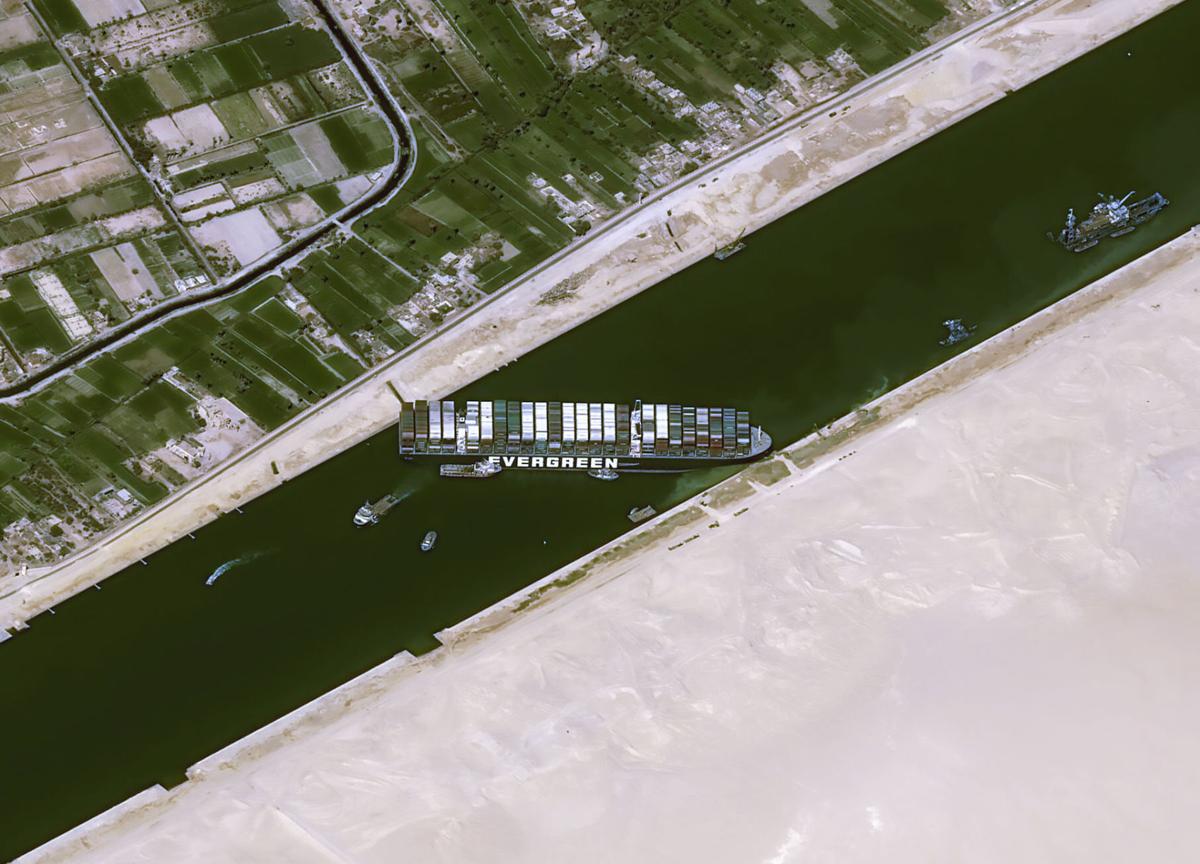 This satellite image from Cnes2021, Distribution Airbus DS, shows the cargo ship MV Ever Given stuck in the Suez Canal near Suez, Egypt, Thursday, March 25, 2021. The skyscraper-sized cargo ship wedged across Egypt's Suez Canal further imperiled global shipping Thursday as at least 150 other vessels needing to pass through the crucial waterway idled waiting for the obstruction to clear, authorities said. (Cnes2021, Distribution Airbus DS via AP)

This photo released by the Suez Canal Authority on Thursday, March 25, 2021, shows a backhoe trying to dig out the keel of the Ever Given, a Panama-flagged cargo ship, that is wedged across the Suez Canal and blocking traffic in the vital waterway. An operation is underway to try to work free the ship, which further imperiled global shipping Thursday as at least 150 other vessels needing to pass through the crucial waterway idled waiting for the obstruction to clear. (Suez Canal Authority via AP)

This satellite image from Cnes2021, Distribution Airbus DS, shows the cargo ship MV Ever Given stuck in the Suez Canal near Suez, Egypt, Thursday, March 25, 2021. The skyscraper-sized cargo ship wedged across Egypt's Suez Canal further imperiled global shipping Thursday as at least 150 other vessels needing to pass through the crucial waterway idled waiting for the obstruction to clear, authorities said. (Cnes2021, Distribution Airbus DS via AP)

ISMAILIA, Egypt — Dredgers, tugboats and even a backhoe failed to free a giant cargo ship wedged in Egypt’s Suez Canal on Thursday. More than 150 vessels are now backed up, with hundreds more headed to the vital waterway, and losses to global shipping are mounting.

The skyscraper-sized Ever Given, carrying cargo between Asia and Europe, ran aground Tuesday in the narrow, man-made canal dividing continental Africa from the Sinai Peninsula. Even with the aid of high tides, authorities have been unable to push the Panama-flagged container vessel aside, and they are looking for new ideas to free it.

In a sign of the turmoil the blockage has caused, the ship’s Japanese owner even offered a written apology.

“We are determined to keep on working hard to resolve this situation as soon as possible,” Shoei Kisen Kaisha Ltd. said. “We would like to apologize to all parties affected by this incident, including the ships travelling and planning to travel through Suez Canal.”

As efforts to free it resumed at daylight Thursday, an Egyptian canal authority official said workers hoped to avoid offloading containers from the vessel as it would take days to do so and extend the closure. The official spoke on condition of anonymity as he wasn’t authorized to talk to journalists.

So far, dredgers have tried to clear silt around the massive ship. Tug boats nudged the vessel alongside it, trying to gain momentum. From the shore, at least one backhoe dug into the canal’s sandy banks, suggesting the bow of the ship had plowed into it. However, satellite photos taken Thursday and analyzed by The Associated Press showed the vessel still stuck in the same location.

Lt. Gen. Osama Rabei, the head of the canal authority, said navigation through the waterway would remain halted until the Ever Given is refloated. A team from Boskalis, a Dutch firm specialized in salvaging, arrived at the canal Thursday, although one of its top officials warned removing the vessel could take “days to weeks.”

A team from the Boskalis subsidiary SMIT “spent the day doing inspections and doing calculations to assess the state of the vessel and a plan on how to refloat the vessel,” spokesman Martijn Schuttevaer told the AP. He did not offer a time frame.

The Suez Canal Authority said one idea the team discussed was scraping the bottom of the canal around the ship.

Boskalis chairman Peter Berdowski on Wednesday described the ship as “a very heavy whale on the beach.”

“The ship, with the weight it now has, can’t really be pulled free. You can forget it,” he told the Dutch current affairs program “Nieuwsuur.”

Bernhard Schulte Shipmanagement, the company that manages the Ever Given, said its 25-member crew was safe and accounted for. Shoei Kisen Kaisha said all the crew came from India.

The ship had two pilots from Egypt’s canal authority aboard the vessel to guide it when the grounding happened around 7:45 a.m. Tuesday, Bernhard Schulte Shipmanagement said.

Canal service provider Leth Agencies said at least 150 ships were waiting for the Ever Given to be cleared, including vessels near Port Said on the Mediterranean Sea, Port Suez on the Red Sea and those already stuck in the canal system on Egypt’s Great Bitter Lake.

Cargo ships already behind the Ever Given in the canal will be reversed south back to Port Suez to free the channel, Leth Agencies said. Authorities hope to do the same to the Ever Given when they can free it.

But many more ships already are en route to the canal.

Using data from Automatic Identification System trackers on ships at sea, data firm Refinitiv shared an analysis with the AP showing over 300 ships remained on the way to the waterway over the next two weeks. Some vessels could still change course, but the crush of ships listing the Suez Canal as their destination shows an even-greater backlog looms for shippers already under pressure amid the coronavirus pandemic.

“Blocking something like the Suez Canal really sets in motion a number of dominos toppling each other over,” said Lars Jensen, chief executive of Denmark-based SeaIntelligence Consulting. “The effect is not only going to be the simple, immediate one with cargo being delayed over the next few weeks, but will actually have repercussions several months down the line for the supply chain.”

Evergreen Marine Corp., a major Taiwan-based shipping company that operates the ship, said the Ever Given had been overcome by strong winds as it entered the canal, something Egyptian officials earlier said as well. High winds and a sandstorm plagued the area Tuesday, with winds gusting to 50 kph (30 mph).

An initial report suggested the ship suffered a power blackout before the incident, something Bernhard Schulte Shipmanagement denied.

“Initial investigations rule out any mechanical or engine failure as a cause of the grounding,” the company said.

In Japan, Chief Cabinet Secretary Katsunobu Kato told reporters the Suez Canal is part of a crucial international sea lane, and that the Japanese government was gathering information and working with local authorities.

The closure could affect oil and gas shipments to Europe from the Mideast, which rely on the canal to avoid sailing around Africa. The price of international benchmark Brent crude stood at over $61 a barrel Thursday.

Overall, famed shipping journal Lloyd’s List estimates each day the Suez Canal is closed disrupts over $9 billion worth of goods that should be passing through the waterway. A quarter of all Suez Canal traffic a day comes from container ships like the Ever Given, the journal said.

The Ever Given, built in 2018 with a length of nearly 400 meters (a quarter mile) and a width of 59 meters (193 feet), is among the largest cargo ships in the world. It can carry some 20,000 containers at a time. It previously had been at ports in China before heading toward Rotterdam in the Netherlands.

Opened in 1869, the Suez Canal is a crucial link for oil, natural gas and cargo. It also remains one of Egypt’s top foreign currency earners. In 2015, the government of President Abdel-Fattah el-Sissi completed a major expansion of the canal, allowing it to accommodate the world’s largest vessels. However, the Ever Given ran aground south of that new portion of the canal.