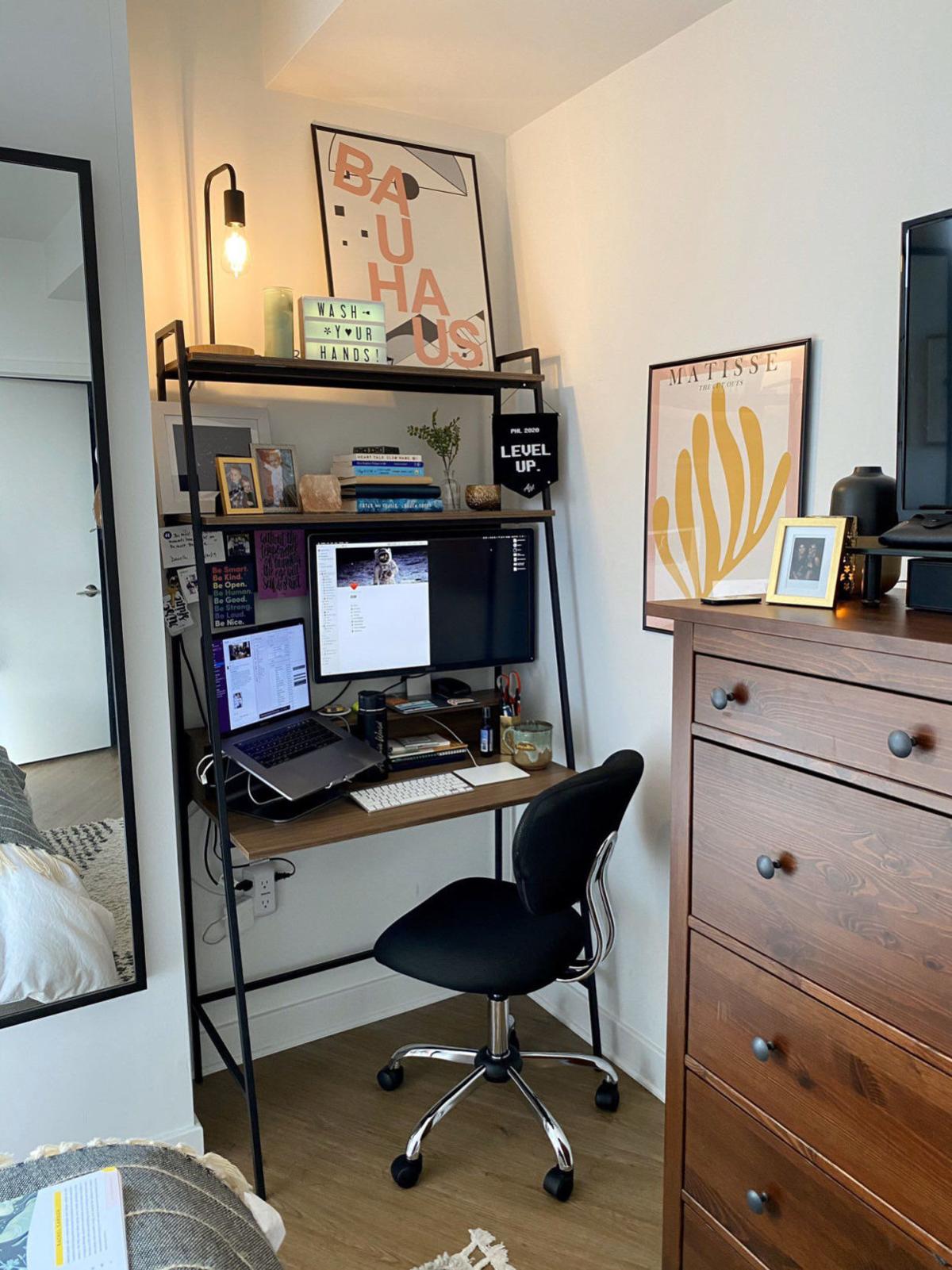 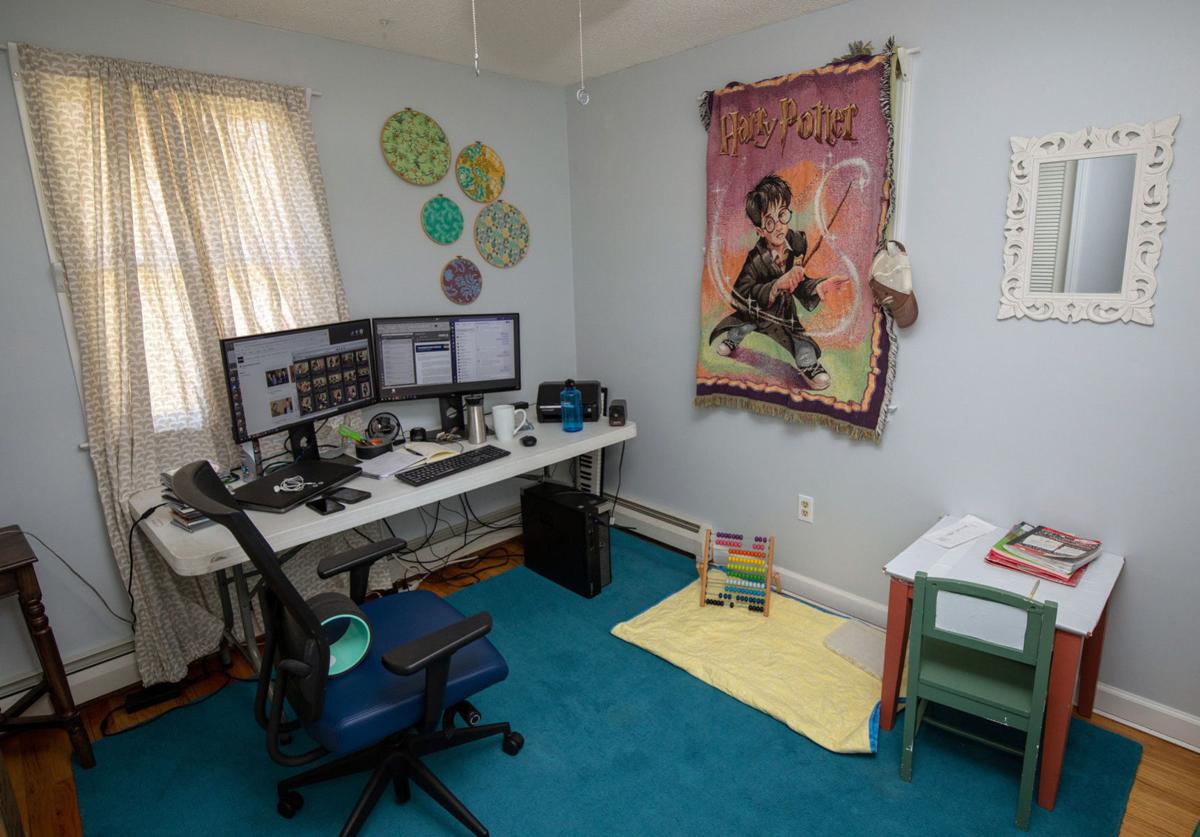 When Danielle McKenrick’s boss told employees to work from home because of the novel coronavirus, no one was sure how long it would last.

The design firm where she works has a flexible remote-work policy, anyway, McKenrick said, and most of her colleagues were used to putting in a day’s work without the comforts of the office. Then one week turned into the rest of the month and video conference meetings became the norm. McKenrick was fielding calls from her bedroom and living room sofa, and reviewing designs from a makeshift standing desk of cardboard boxes on the kitchen counter. After a while, she’d had enough.

She bought a small desk and swivel chair online, and grabbed her external monitor, keyboard and trackpad from her Washington office. And in a snug corner of her bedroom, she created a space that “feels a little bit normal amid all the chaos.”

Workers nationwide are trying to do the same, snapping up electronics, furniture and lighting to transform their spare rooms and kitchen tables into centers of productivity while they wait for the all-clear message on the coronavirus, the global pandemic that sent most of the country into lockdown in March.

A Best Buy spokesperson said the big box retailer is selling more laptops, monitors and webcams, though declined to provide specific sales data. Like most large chains, its bricks-and-mortar operation is mostly shuttered.

Overstock.com said sales of home office furniture — a top category year-round — are up more than 100% since the outbreak, though it declined to provide specific figures.

“We were well-prepared for the rapid change in the market due to our site infrastructure and agile supply chain, and we were able to easily adapt to shifts in top-selling products, from outdoor and patio furniture one week to office essentials and exercise equipment the next,” said Ron Hilton, Overstock’s chief sourcing and operations officer.

Havenly, an online furniture maker, has seen increased interest in office designs. A spokesman said office-wear now makes up 26% of its sales, compared with 6% in 2019. Some shoppers are bypassing desks for kitchen or dining room tables; sales of those are up 20%. Lamp purchases are up 16%.

Some employers sent workers home with trunks full of equipment and furniture. Gerry McCarthy, a multimedia producer for the UConn Foundation, was able to retrieve a computer tower, two large monitors, mouse, keyboard, photo scanner and electric pencil sharpener. He made off with his office chair, too. The foundation’s IT department worked over the weekend to outfit staff with whatever they might need at home, he added.

McCarthy was used to working out of his house near Hartford, Connecticut, every so often. But when he and his wife, a federal employee, both needed the home office, the space was too tight for two.

So he moved some furniture out of a guest bedroom, unfolded an old card table his family used for cookouts and replicated his in-office workspace. The two monitors are shoved to the back of the card table, with notebooks stacked beneath them. Instead of a mug to hold pens and pencils, he now has a roll of duct tape turned on its side. He also put his wife’s old Harry Potter throw over the window to block the light — it’s easier to edit photographs or video in the dark.

“Like everywhere else, we’ve had to make real serious adjustments to the work that we’re doing,” he said. “Not knowing what kind of work I’m going to have for however long we’ll be out, I prepared to do pretty much anything.”

Kayla McMahon, the director of business operations at Boston public relations agency Inkhouse, said she advised colleagues to take whatever they needed to “feel as productive at home as you are in the office.’ I mean, some people took their swivel chairs.”

It was McMahon’s job to help co-workers determine how they would set up their new workspace, outline what the company could provide and what they might want to buy for themselves.

Colleagues used to drop by McMahon’s desk constantly to ask about technology or certain projects. Those kinds of questions picked up in the earliest days of companywide tele-working. But less than a month in, the staff has adapted, she said. They’re resolving issues on their own, and everyone seems comfortable in their new, personal work setups.

“It’s scary because I feel like I’m not as needed as I thought I was,” she said. “But it’s beneficial because I can get more work done. It’s a seesaw. I’m trying to find that new balance.”