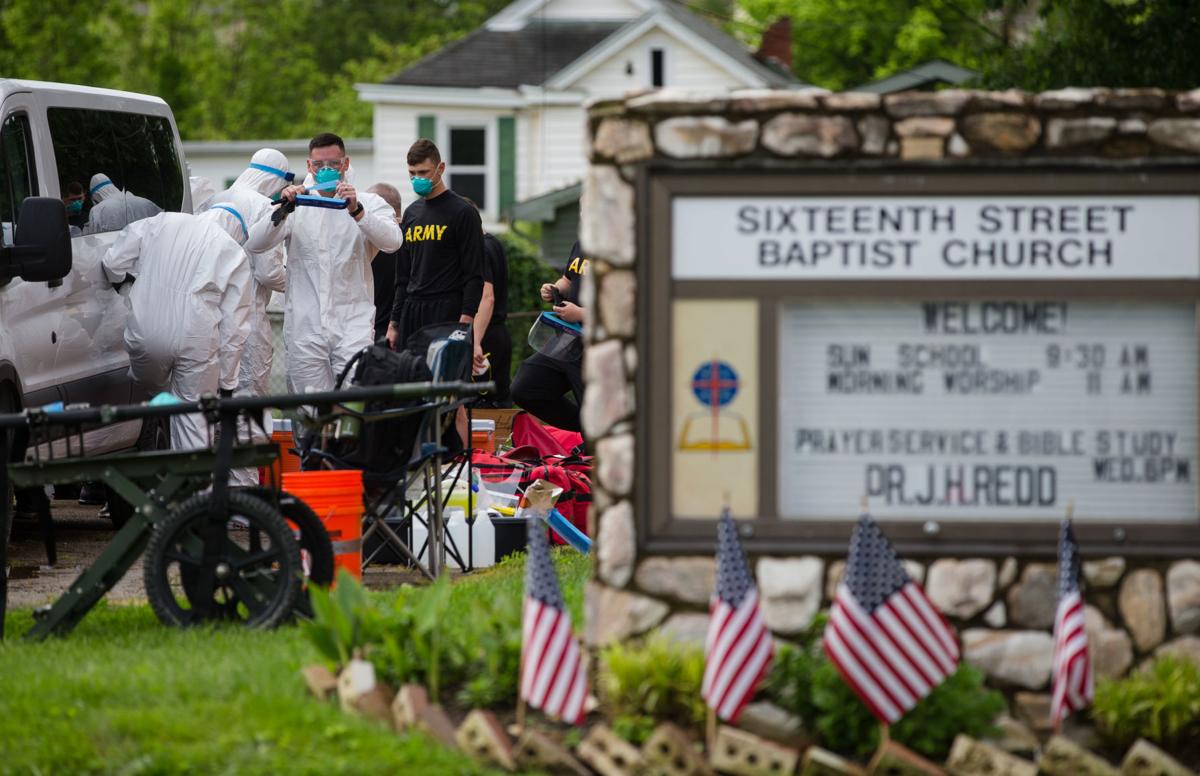 Members of the West Virginia National Guard prepare for the opening of a free COVID-19 drive-thru testing site on Friday, May 22, 2020, outside Sixteenth Street Baptist Church in Huntington.

Michael Kilkenny, physician director for the Cabell-Huntington Health Department, speaks with media before the opening of a free COVID-19 drive-thru testing site on Friday, May 22, 2020, in Huntington. 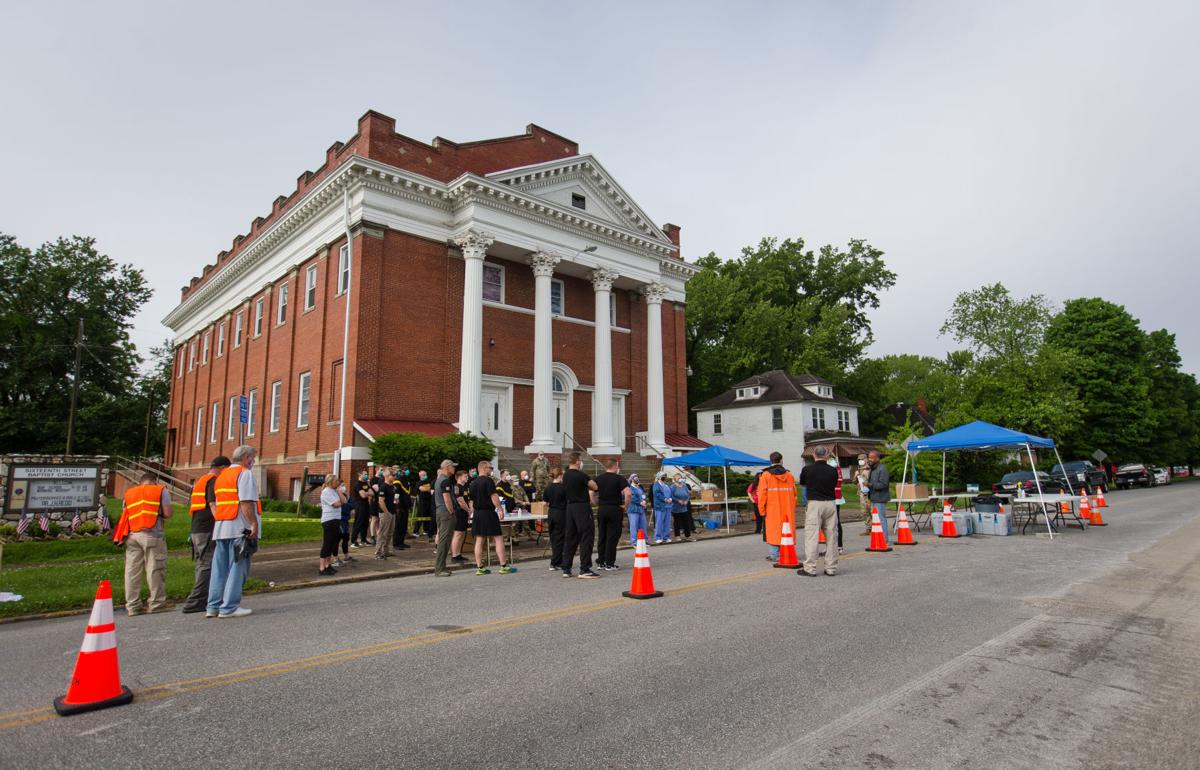 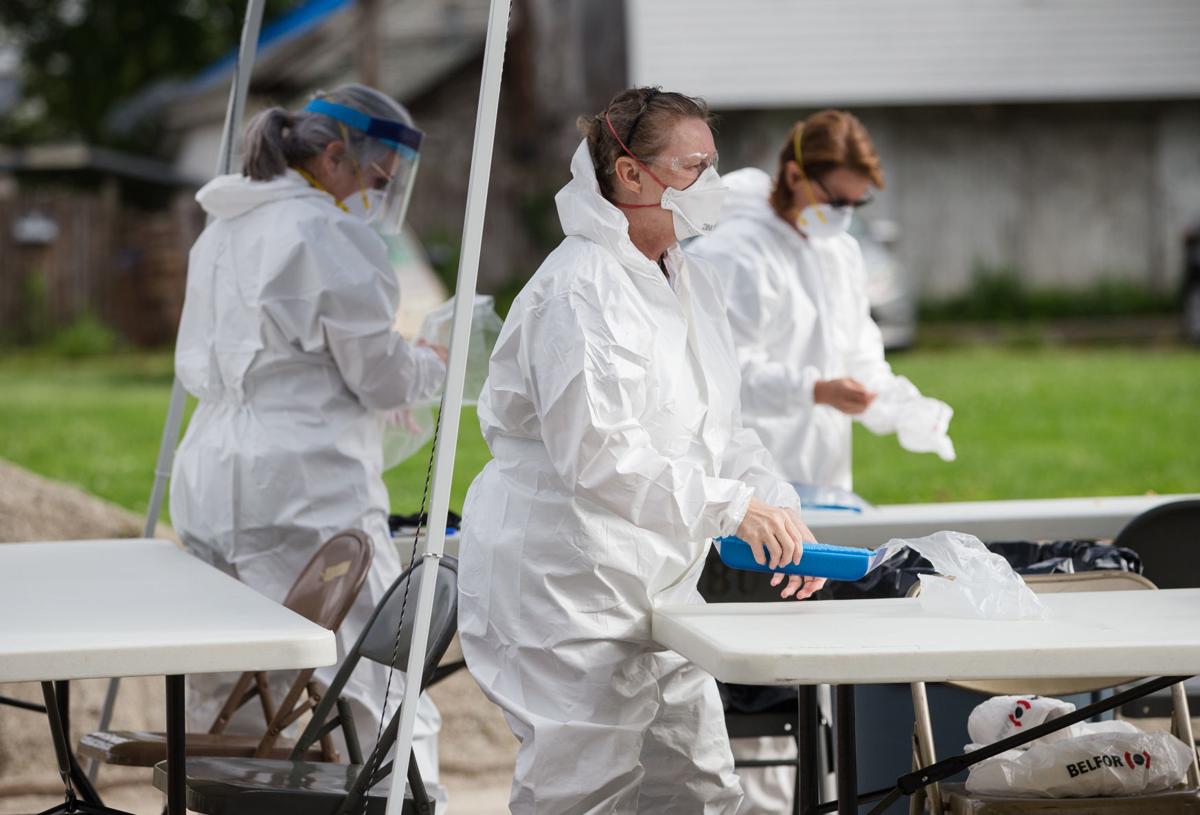 Members of the West Virginia National Guard prepare for the opening of a free COVID-19 drive-thru testing site on Friday, May 22, 2020, outside Sixteenth Street Baptist Church in Huntington.

Michael Kilkenny, physician director for the Cabell-Huntington Health Department, speaks with media before the opening of a free COVID-19 drive-thru testing site on Friday, May 22, 2020, in Huntington.

HUNTINGTON — More than 600 people were tested in Cabell and Kanawha counties Friday during the first day of free COVID-19 testing provided by the state. Testing continues Saturday.

In Kanawha County, 385 people were tested at the Schoenbaum Family Enrichment Center in Charleston, according to the Kanawha-Charleston Health Department. In Cabell County, 290 tests were performed at the Sixteenth Street Baptist Church in Huntington.

Dr. Michael Kilkenny, medical director of the Cabell-Huntington Health Department, said it wasn’t quite as many as he had hoped — his goal was 1,000 over two days, so the pace would have to increase significantly Saturday — but people who otherwise wouldn’t have access to testing were tested, and Kilkenny said no matter where the numbers land, he will feel good about that.

Though open and free for all, even those not experiencing symptoms of COVID-19, the target audience is the medically under-served. The testing is also part of an effort to address the virus disproportionately impacting people of color in the state and nation.

“We were getting the population when I was there this morning,” Kilkenny said. “The neighborhood is really a great neighborhood full of very vibrant and caring people. We want to serve that neighborhood. It might be an inconvenience for those living on 9th Avenue, but from the feedback from people who walked up, everyone was cheerful and everyone seemed to be positive about the aspects.”

The Huntington Black Pastors Association assisted county health officials in getting the word out about testing, Kilkenny added.

Kilkenny said the decision to get tested is up to the individual. It’s a medical test, he said, which aren’t done for fun. A person with no symptoms may experience increased anxiety as they await test results, he said.

West Virginia Department of Health and Human Resources Secretary Bill Crouch said Friday during the governor’s daily press briefing that the state was beginning more aggressive testing, hoping to get a better grasp of the prevalence of the virus within the state. Due to limited supplies, testing has been limited mainly to those with symptoms.

DHHR has recently begun receiving serology-based laboratory results, frequently referred to as antibody testing. Serology-based test results will not be included in the dashboard reporting of confirmed laboratory results but will be reported separately on the county and lab tests tabs. Serology testing offers a different tool for understanding disease occurrence in communities, Slemp said.

In alignment with updated definitions from the Centers for Disease Control and Prevention, the dashboard now includes probable cases. Although a small portion of the cases to date, probable cases are individuals who have symptoms and either serologic (antibody) or a link to a confirmed case, but no confirmatory test. Public health takes all the same precautions for probable cases as confirmed cases, Slemp said, so those are now included. Ohio and Kentucky have included probable cases in their case counts for some time.

Slemp said the changes would lead to a dramatic one-time increase of positive cases and decrease in laboratory results received Friday. As of 5 p.m., there were 102 new positives reported, including probable cases.

One new death was reported Friday, a 54-year-old man from Lewis County. The total number of fatalities related to COVID-19 in West Virginia is now 72.

In Kentucky, 141 new positive cases were reported, for a total of 8,426, and five new deaths, for a total of 391. Kentucky Gov. Andy Beshear said during his evening press briefing that he believes the state is finally seeing a decline in cases versus a plateau.

Beshear also announced an online portal for Kentucky voters to request an absentee ballot went live Friday. Ballots must be requested by June 15 for the June 23 primary. The last day to register to vote in Kentucky is Tuesday, May 26.

The Associated Press reports that for most people, the novel coronavirus causes only mild or moderate symptoms, such as fever and cough. For some, especially older adults and people with existing health problems, it can cause more severe illness, including pneumonia. The vast majority of people recover from the new virus.