The Marshall University campus normally is quiet during spring break, but this week it's more so because of measures taken to protect employees from the spread of the COVID-19 virus. Ryan Fischer/The Herald-Dispatch

Wednesday morning, traffic flowed on the main thoroughfares in downtown Huntington, although at a lesser rate than normal as people obeyed the stay-at-home order issued by Gov. Jim Justice on Monday. On-street parking was widely available. In most cases, you could get a meter in front of the place you wanted to go, assuming that place would let you in, although metered spots on some streets were all taken.

A few walkers and joggers enjoyed Ritter Park on the damp, chilly morning, although, again, not nearly as many as usual.

Anyone wanting to visit a family member in a hospital had to meet the hospital’s stringent anti-infection rules for entry.

The freedom of movement cherished by Americans has come to a halt.

The effects of the novel coronavirus, also known as COVID-19, will be felt for months if not years. The president and Congress are doing what they can on a national scale, and governors have taken the lead on dealing with the virus’ effects closer to home.

Here, communities are doing their parts. The Huntington City Council could be about to take a painful but necessary step to ease some of the pain locally.

Last week, Huntington Mayor Steve Williams announced a plan to help people and businesses affected by the pandemic. Monday night the City Council gave first reading to an ordinance putting that plan into effect. It will give the ordinance its second and final reading at a special call meeting on March 31.

Williams said the city wanted to take measures immediately to help people and businesses affected by the outbreak. He said his fear is that if restaurants and retail shops close because of the virus outbreak, they may not reopen once the outbreak is over.

The ordinance will reduce B&O taxes for those establishments from 2.5% to 0%. Williams said he also wants to suspend the $20-a-month refuse fee for residents. The savings might not be a lot to some people, but it could make the difference for anyone out of work because of the virus, he said.

To cover the loss of $1.25 million in revenue, Williams said the city would tighten its expenses and delay any unnecessary purchases.

Any government entity that relies on taxes — that’s the great majority of them — will have to make cutbacks as we make our way through this pandemic. That will mean some things will have to be delayed. If we must live with a few more unfilled potholes, so be it.

A large number of people in the area are seeing their incomes reduced by the stay-at-home orders that are in place. Not everyone can work from home. That’s particularly true of part-time workers, and it’s true of a number of self-employed people such as barbers and hair stylists. Businesses are closing because people can’t get to them or people are trimming their discretionary spending.

We all have to make cutbacks, and cutbacks come with a price.

The action pondered by the city council and the mayor likely will be duplicated by other agencies. It’s a difficult step, but a necessary one.

It could take years to recover from the events of the past month, but steps have to be taken now by everyone — by government and by private citizens — to reduce the damage this virus has wrought on our communities and our lives. 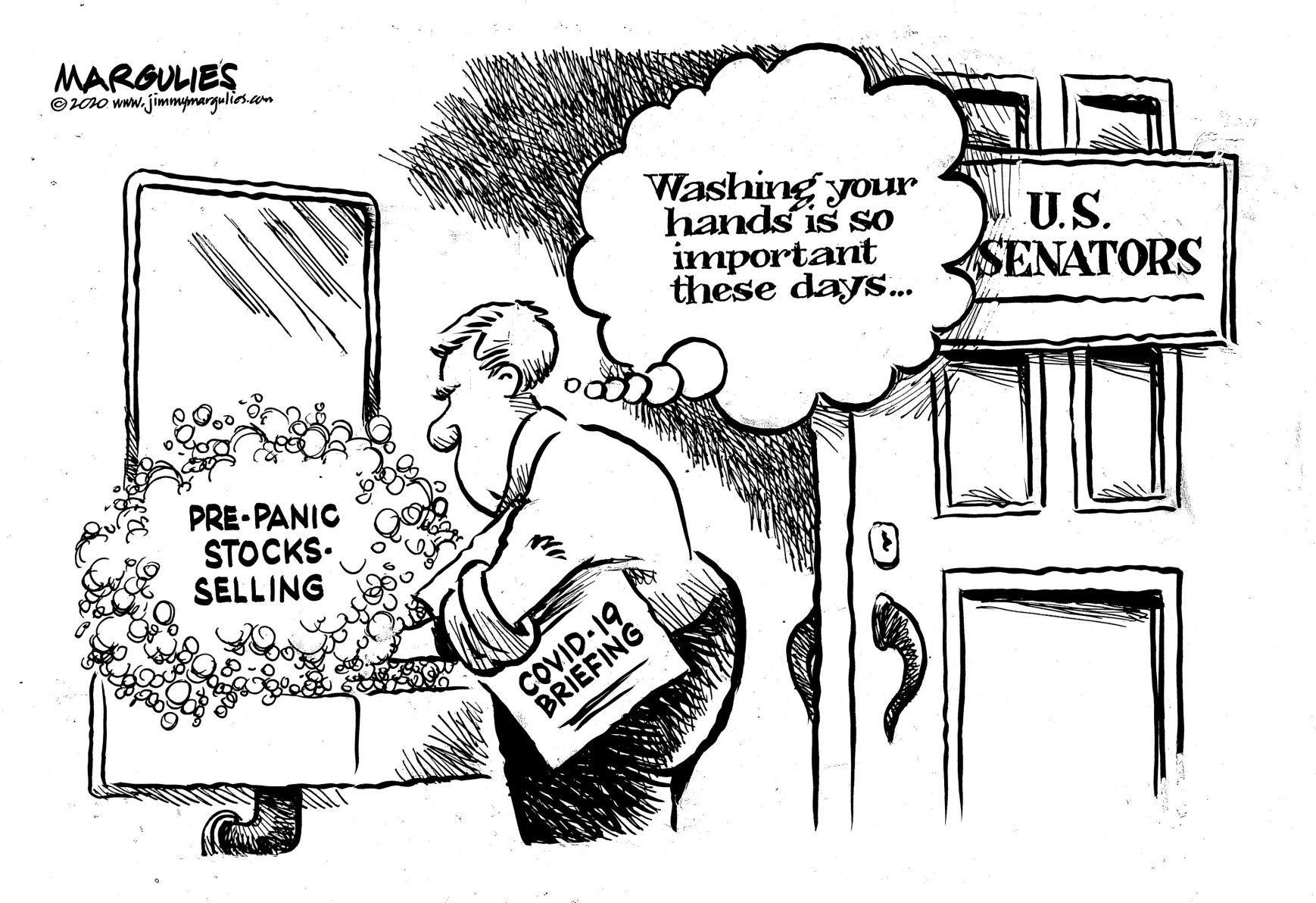 Though some have died from the coronavirus, we pray that the numbers shall decrease and that their deaths shall not have been in vain.

We have learned some things about COVID-19. We know that it can be airborne and that improved hygiene can restrict the germ’s capabilities. Once epidemiologists and researchers can determine the weaknesses and the strengths of the microbe, with the help of God they may develop some control over it.

The virus is like an alien we are dealing with except that it is microscopic and invisible and can kill. Another thing we know is that its impact diminishes after 14 days. I believe they can and will discover a vaccine.

“In God we trust” is written on all the money in America. It’s time we started trusting him.

COVID-19, the novel coronavirus, is bringing illness, death, financial destruction, fear and more to the whole world. This is new territory; it’s a century since the 1918 influenza pandemic caused similar devastation. Now that so many are afflicted by this malady, it is time to not only take care of the sick, seek cures and immunizations, but also to see that some good can eventually emerge.

First, more nations are talking to each other in constructive ways. You can’t hide or contain a coronavirus outbreak within borders. International intrigue continues but that, as well as tariffs and undocumented immigrants, are currently much lower on the list of Americans’ priorities.

Even in an election year, when politicking is at its zenith, most elected officials recognize that our country’s physical, emotional and financial health requires that they work together efficiently and across the aisle. COVID-19 doesn’t select victims by political party. It has taken a global disaster to get our government thinking proactively — as it should have been doing all along but hasn’t been motivated to do since 9/11.

Amid the bad, the reality is that our health system is woefully inadequate and unprepared for handling major disease outbreaks. Good should emerge from this as the crisis subsides. The Centers for Disease Control and Prevention (CDC) will likely undergo major realignments and hopefully, the National Institutes of Health (NIH) and major research institutions will be rewarded for their scientific accomplishments. In recent years, institutions that promote science and not politics have gotten the short end of the financial stick.

Our economy is having a rough wake-up call. Making and spending money and having good jobs is part of the American way of life, but our nation lacks adequate financial safety nets. Our 401Ks, investments, mortgages and savings have also been attacked by COVID-19. Our national leaders must understand that a government bailout of working people, especially those in small businesses and independent contracting, is necessary.

Americans have shown they will not tolerate profiteers who endanger our nation’s health. The Tennessee brothers who bought up every available sanitizing product in parts of their state and Kentucky to sell at exorbitant profits were shamed into donating their loot to needed organizations and are suffering consequences to their commercial reseller status. We have finally accepted the necessity of physical-distancing and there is hope that extreme toilet paper hoarding is no longer on a roll.

Doctors, nurses, EMTs and first responders as well as those supplying foods and medicines are putting their own lives on hold and on the line. Food banks are receiving donations, meals for school children have been arranged, online classes have become the new normal, volunteers are helping the homeless, neighbors are looking after neighbors and some companies are changing their product line for the nation’s benefit. For example, Georgia and Kentucky distilleries have shifted from producing spirits to lifting spirits by making and donating hand sanitizers. During WWII, many consumer industries were realigned to make military rather than consumer products. We may have to do this with health products.

Americans have faced horrible times before. They are always rough and scary, but when our nation faces these crises constructively, some good eventually emerges. May we live safely, wisely and with kindness during these times.

This is one of a series of guest columns from candidates in contested races in the May 12 West Virginia Primary Election.

Any parent or grandparent knows that children will happily spend the better part of any nice day at the spray park. April Dawn Park in Milton used to be the only spray park in the area. A small corner in town with a few swings and things to climb on, with controlled patterns of water spouting out in the wet area, can provide hours of fun for children. It also has a beautiful picnic facility. Now Barboursville has a spray park and soon St. Clouds will have one. This was so needed in West Huntington and will, no doubt, be a busy destination for families.

A community center in the area would be another great addition, as has proven to be true in other parts of the city. Caring area residents and volunteers have made these facilities neighborhood hubs for youth and adults. We’re so fortunate in Huntington to be among community-minded professionals who volunteer and organize activities at these centers. West Huntington is home to a large population of senior citizens, many of whom, like myself, are lifelong residents of the area. There is also a large senior citizens home on Madison Avenue. As much as seniors would benefit from informational sessions or just get-togethers at a great meeting place like a community center, they happen to be the people who have lived the longest and have accumulated the most wisdom to share with each other and everyone else. From help with homework to sporting activities, coordination of neighborhood watch programs, speakers and an occasional dinner, community centers are important to the areas that they serve.

Central City has so many unique places to visit that you won’t find anywhere else, with some new small businesses dotted in the area. Of course, we want to see more of them. The Central City Days event is an annual reminder of everything the area has to offer. You can shop, eat and relax with a book any day of the year there. The gazebo on 14th Street West is available to rent for special events. West Huntington puts on a stellar Veterans Day parade every year that everyone should see.

I am a life-long resident of West Huntington. I know many of the residents and business owners well. Many of you know that I served as a county magistrate until my retirement last year. I spent years assisting people and families in resourcing the help that they needed. I think West Huntington needs a focused representative who is determined to address the needs of the area. I believe that I can do that.