The event turned the St. Mary’s Center for Continuing Education into Bourbon Street for the night, featuring live music, seafood and, of course, drinks.

Proceeds from the party benefit the orchestra and the Cabell Huntington Hospital Edwards Comprehensive Cancer Center Samaritan Fund, which helps pay for specific needs, like wigs, prosthetics or even cab fare to the hospital for treatment, of individual cancer patients who are having trouble making ends meet.

To donate to the fund, visit www.edwardsccc.org/make-a-gift/.

A slew of 5-milligram pills of oxycodone sit on a table. Whether or not Huntington and Cabell County will argue their allegations blaming several drug firms for contributing to the opioid epidemic in the area in front of a judge or jury rests on the dismissal of a request for punitive damages.

HUNTINGTON — Whether or not Huntington and Cabell County will argue their allegations blaming several drug firms for contributing to the opioid epidemic in the area in front of a judge or jury rests on the dismissal of a request for punitive damages, according to court filings made last week.

The lawsuits filed by the Cabell County Commission and city of Huntington in 2017 argue that the “Big Three” defendants — AmerisourceBergen Drug Corp., McKesson and Cardinal Health — breached their duty to monitor, detect, investigate, refuse and report suspicious orders of prescription opiates coming into the state over the past several years — a duty the lawsuits claim companies have under the Controlled Substances Act of 1970.

The lawsuits seek payment to help remedy the problems drug dependency allegedly has caused in the area.

Although they were among the first to file, the local cases were sent to a Cleveland federal court for arguments and pretrial motions to be settled ahead of trial. They were recently sent back to Charleston-based District Judge David A. Faber.

After a hearing last month, Faber ordered the parties write the 10-page motions after the governments asked for a bench trial, to be decided by the judge, and the defendants said they wanted a jury trial.

The defendants also asked for 18 additional months for trial prep, while the governments’ attorneys said they would be ready to go by March.

In their motions filed last week, the defendants argued that the 7th Amendment gives them a right to a jury trial. They also pointed to the plaintiffs’ initial complaint in which they asked for a jury trial, a request the defendants said cannot be withdrawn.

They also said traditionally, under English law, a public nuisance claim that sought punitive damages was a question answered only by a jury, not a judge.

To speed up the process, and to get a bench trial, the plaintiffs’ attorneys offered to dismiss any punitive damage claims in the lawsuit if the defense would agree to the bench trial.

If those claims are dismissed — by Faber or the defense’s agreement — the trial can be conducted as a court of equity and would not require a jury trial, eliminating the defense’s complaints, the attorneys said.

Prior to last week’s filings, Cabell County’s attorney, Paul T. Farrell, filed notice that he had left the law firm of Greene, Ketchum, Farrell, Bailey & Tweel, where he had been employed for 15 years. He now works for his own law firm, Farrell Law, in Huntington.

In an interview with the West Virginia Record, Farrell said his dedication to only working hundreds of opioid cases the past few years had put a strain on the law firm, although he left with no ill will between him or his fellow attorneys.

The attorneys are expected to return to Faber’s courtroom March 5, at which time he is expected to set a trial date. He could issue an opinion regarding the jury issue prior to that, however.

This rendering from Edward Tucker Architects shows phase one of the planned construction of a multi-use sports complex in the village of Barboursville. The approved phase one of the project will convert the Barboursville Soccer Complex into an outdoor facility able to host different sports. Phase two would add an indoor complex holding courts, fields and rental space.

BARBOURSVILLE — Hoping to capitalize on the increasingly growing sports tourism industry, the village of Barboursville will invest $1.8 million toward building a long planned multi-sports complex.

During a regular meeting last week, Barboursville Village Council members approved the first phase of the project, which includes bringing synthetic turf, lighting and other improvements to the village’s Soccer Complex this year.

This phase will transform those fields, located along Deer Run Road, into a planned outdoor facility that can be converted for soccer, football, lacrosse and baseball/softball. A 60,000-square-foot indoor facility is planned for an eventual phase two of the project, which could include batting cages, volleyball courts and indoor fields.

A multi-use sports complex has been a goal for many of the village’s administrations over the years, but became more of a priority in recent years thanks to the success in hosting several national youth soccer tournaments, said Mayor Chris Tatum.

“In 2009, when travel soccer began coming through our town here, they realized what a tax benefit that was to B&O taxes, the hotel and motel tax and from having all those people in town,” Tatum said. “You have hotel rooms full from Clendenin (in Kanawha County, West Virginia) to below Grayson (Kentucky).”

During the 2019 US Youth Soccer Eastern Regional Championships, 225 state champion teams from 13 states came to the area to compete for a chance to participate in the national tournament. Some families stayed in hotels as far away as Chapmanville, West Virginia, which illustrates the economic benefit these tournaments bring to the region, he said.

A multi-use sports complex became more of a reality thanks to the village’s successful application to the West Virginia Municipal Home Rule Program last year. The program allows approved municipalities to pass laws without regard to state law, but with some restrictions.

Barboursville predicated its application into the Home Rule Program on the planned expansion of recreation and on infrastructure improvements, Tatum said. A goal now is to tap into the height of sports tourism, which has become a $9 billion industry nationwide, he said.

“We’ve already determined that we can share in that,” he said. “In staying current in improving our facilities, we can continue to do that for years to come.”

Funding for the first phase of the project will come partly from the village’s general fund and partly from an excess levy that is approved by voters every five years, most recently in 2016. The levy, created in 1953, sets aside money for a planned recreation center.

Depending on the success of the first phase of the project, the village will pursue funding options, like revenue bonds, to finance phase two, he said. Phase two includes a planned indoor facility located nearby the already-existing soccer fields. This facility could hold batting cages, fields, courts, and spaces to rent for birthday parties and trade shows.

A multi-use sports complex has been a goal for many decades, originally envisioned as a YMCA-style facility, Tatum said. However, that vision changed over the years with a goal not to compete with gyms and recreation centers in the area.

“This project has been a long time coming, and I think this furthers our commitment to not only our youth, but to our citizens,” Tatum said. “This facility, as it continues to develop over the next few years, will be something that all of our residents will be proud of and something that everyone can utilize.” 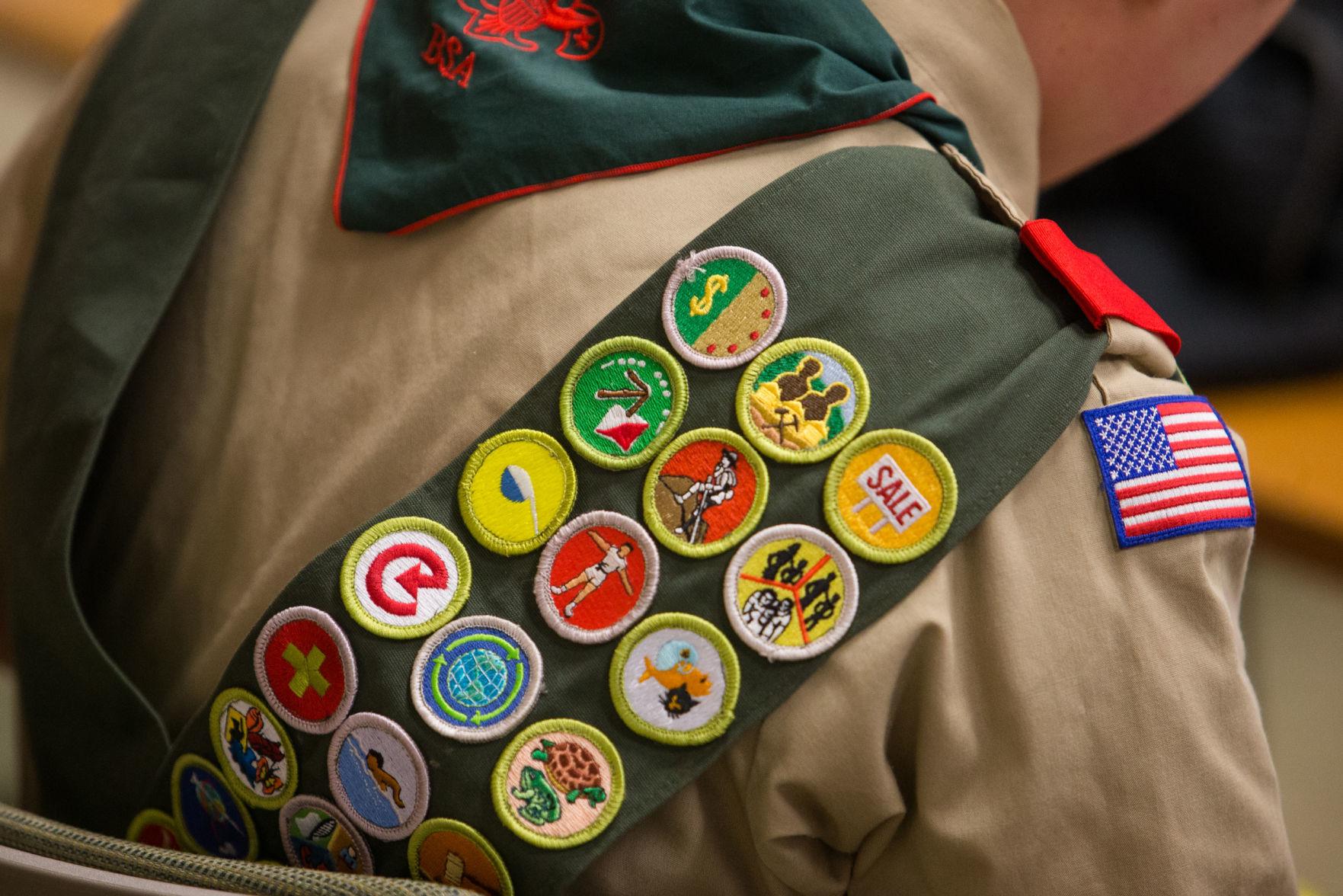 Scout Eli Rayburn of Troop 168 displays his badges while attending a course inside the Arthur Weisberg Family Applied Engineering Complex on Saturday, Feb. 8, 2020, at Marshall University in Huntington.