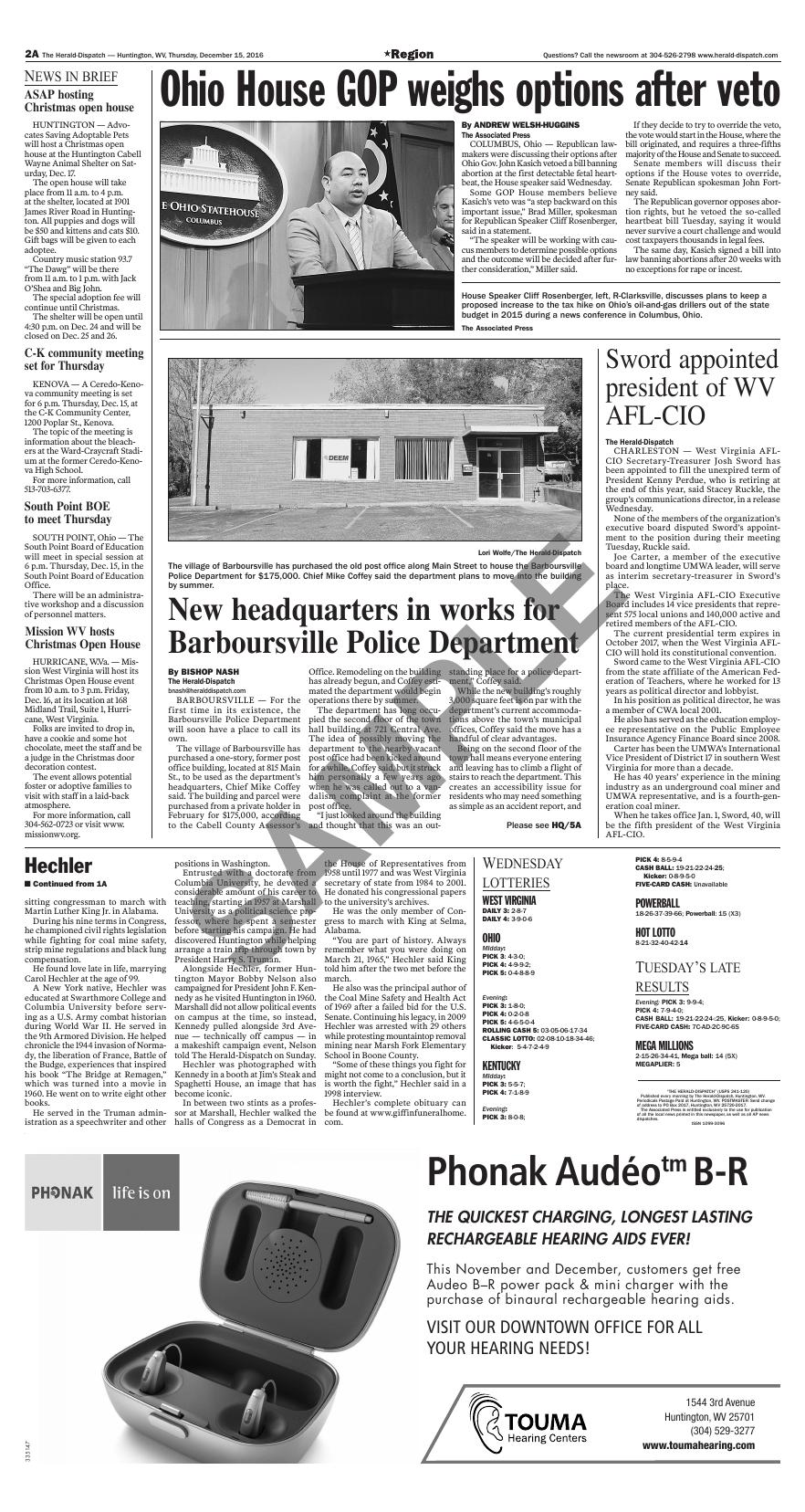 Former U.S. Congressman and West Virginia Secretary of State Ken Hechler will lie in repose next week at the Culture Center at the West Virginia Capitol Complex.

ROMNEY, W.Va. — Former U.S. Congressman and West Virginia Secretary of State Ken Hechler will lie in repose next week on the capitol grounds where he served the Mountain State for more than a decade in one of many public offices he held in his lifetime.

Hechler died peacefully after having dinner Saturday, at age 102, at his home in Romney, West Virginia.

Hechler will lie in repose from 10 a.m. to 3 p.m. Monday, Dec. 19, at the Culture Center at the West Virginia Capitol Complex, 1900 Kanawha Blvd. East, Charleston, followed by a service at the Culture Center at 3 p.m., according to his obituary from Giffin Funeral Home & Crematory in Capon Bridge, West Virginia. His family will receive friends from 4 to 8 p.m. Wednesday, Dec. 21, at the Giffin Funeral Home & Crematory.

In lieu of flowers, Hechler's family has requested that contributions be made to either Hospice of the Panhandle, 330 Hospice Lane, Kearneysville, WV 25430, or the Ken Hechler Scholarship Fund, C/O The Bank of Romney, P.O. Box 876, Romney, WV 26757.

Hechler's life spanned more than a century, and his political career spanned decades. He spent many of those years as an activist, soldier, teacher and author. He worked for three U.S. presidents, interrogated Nazis in World War II and was the only

During his nine terms in Congress, he championed civil rights legislation while fighting for coal mine safety, strip mine regulations and black lung compensation.

He found love late in life, marrying Carol Hechler at the age of 99.

A New York native, Hechler was educated at Swarthmore College and Columbia University before serving as a U.S. Army combat historian during World War II. He served in the 9th Armored Division. He helped chronicle the 1944 invasion of Normady, the liberation of France, Battle of the Budge, experiences that inspired his book "The Bridge at Remagen," which was turned into a movie in 1960. He went on to write eight other books.

He served in the Truman administration as a speechwriter and other positions in Washington.

Entrusted with a doctorate from Columbia University, he devoted a considerable amount of his career to teaching, starting in 1957 at Marshall University as a political science professor, where he spent a semester before starting his campaign. He had discovered Huntington while helping arrange a train trip through town by President Harry S. Truman.

Alongside Hechler, former Huntington Mayor Bobby Nelson also campaigned for President John F. Kennedy as he visited Huntington in 1960. Marshall did not allow political events on campus at the time, so instead, Kennedy pulled alongside 3rd Avenue — technically off campus — in a makeshift campaign event, Nelson told The Herald-Dispatch on Sunday.

Hechler was photographed with Kennedy in a booth at Jim's Steak and Spaghetti House, an image that has become iconic.

In between two stints as a professor at Marshall, Hechler walked the halls of Congress as a Democrat in the House of Representatives from 1958 until 1977 and was West Virginia secretary of state from 1984 to 2001. He donated his congressional papers to the university's archives.

He was the only member of Congress to march with King at Selma, Alabama.

"You are part of history. Always remember what you were doing on March 21, 1965," Hechler said King told him after the two met before the march.

He also was the principal author of the Coal Mine Safety and Health Act of 1969 after a failed bid for the U.S. Senate. Continuing his legacy, in 2009 Hechler was arrested with 29 others while protesting mountain top removal mining near Marsh Fork Elementary School in Boone County.

"Some of these things you fight for might not come to a conclusion, but it is worth the fight," Hechler said in a 1998 interview.

The open house will take place from 11 a.m. to 4 p.m. at the shelter, located at 1901 James River Road in Huntington. All puppies and dogs will be $50 and kittens and cats $10. Gift bags will be given to each adoptee.

The special adoption fee will continue until Christmas.

The topic of the meeting is information about the bleachers at the Ward-Craycraft Stadium at the former Ceredo-Kenova High School.

There will be an administrative workshop and a discussion of personnel matters.

There will be an administrative workshop and a discussion of personnel matters.

Folks are invited to drop in, have a cookie and some hot chocolate, meet the staff and be a judge in the Christmas door decoration contest.

The event allows potential foster or adoptive families to visit with staff in a laid-back atmosphere.

House Speaker Cliff Rosenberger, left, R-Clarksville, discusses plans to keep a proposed increase to the tax hike on Ohio's oil-and-gas drillers out of the state budget in 2015 during a news conference in Columbus, Ohio.

"The speaker will be working with caucus members to determine possible options and the outcome will be decided after further consideration," Miller said.

If they decide to try to override the veto, the vote would start in the House, where the bill originated, and requires a three-fifths majority of the House and Senate to succeed.

The Republican governor opposes abortion rights, but he vetoed the so-called heartbeat bill Tuesday, saying it would never survive a court challenge and would cost taxpayers thousands in legal fees. The same day, Kasich signed a bill into law banning abortions after 20 weeks with no exceptions for rape or incest.

The village of Barboursville has purchased the old post office along Main Street to house the Barboursville Police Department for $175,000. Chief Mike Coffey said the department plans to move into the building by summer.

BARBOURSVILLE — For the first time in its existence, the Barboursville Police Department will soon have a place to call its own.

The village of Barboursville has purchased a one-story, former post office building, located at 815 Main St., to be used as the department's headquarters, Chief Mike Coffey said. The building and parcel were purchased from a private holder in February for $175,000, according to the Cabell County Assessor's Office. Remodeling on the building has already begun, and Coffey estimated the department would begin operations there by summer.

The department has long occupied the second floor of the town hall building at 721 Central Ave. The idea of possibly moving the department to the nearby vacant post office had been kicked around for a while, Coffey said, but it struck him personally a few years ago when he was called out to a vandalism complaint at the former post office.

"I just looked around the building and thought that this was an outstanding place for a police department," Coffey said.

While the new building's roughly 3,000 square feet is on par with the department's current accommodations above the town's municipal offices, Coffey said the move has a handful of clear advantages.

Being on the second floor of the town hall means everyone entering and leaving has to climb a flight of stairs to reach the department. This creates an accessibility issue for residents who may need something as simple as an accident report, and

can create a safety hazard as it forces officers to have to take prisoners up the stairwell for processing.

Coffey said the new, one-story facility will be much more accessible to the public and officers. He added the officers themselves have taken to the idea of a new facility all their own, along with the better work stations and equipment that come with it.

With the department having now expanded to 21 officers, not counting civilian employees, Coffey said the department will grow according to Barboursville's expected population and business growth over the next decade.

"There's a lot of expansion going on in Barboursville," Coffey said. "So there's going to be expansion in the department if it keeps going like it is."

CHARLESTON — West Virginia AFL-CIO Secretary-Treasurer Josh Sword has been appointed to fill the unexpired term of President Kenny Perdue, who is retiring at the end of this year, said Stacey Ruckle, the group's communications director, in a release Wednesday.

None of the members of the organization's executive board disputed Sword's appointment to the position during their meeting Tuesday, Ruckle said.

Joe Carter, a member of the executive board and long time UMWA leader, will serve as interim secretary-treasurer in Sword's place.

The West Virginia AFL-CIO Executive Board includes 14 vice presidents that represent 575 local unions and 140,000 active and retired members of the AFL-CIO.

The current presidential term expires in October 2017, when the West Virginia AFL-CIO will hold its constitutional convention.

Sword came to the West Virginia AFL-CIO from the state affiliate of the American Federation of Teachers, where he worked for 13 years as political director and lobbyist.

In his position as political director, he was a member of CWA local 2001.

He also has served as the education employee representative on the Public Employee Insurance Agency Finance Board since 2008.

Carter has been the UMWA's International Vice President of District 17 in southern West Virginia for more than a decade.

He has 40 years' experience in the mining industry as an underground coal miner and UMWA representative, and is a fourth-generation coal miner.

When he takes office Jan. 1, Sword, 40, will be the fifth president of the West Virginia AFL-CIO. 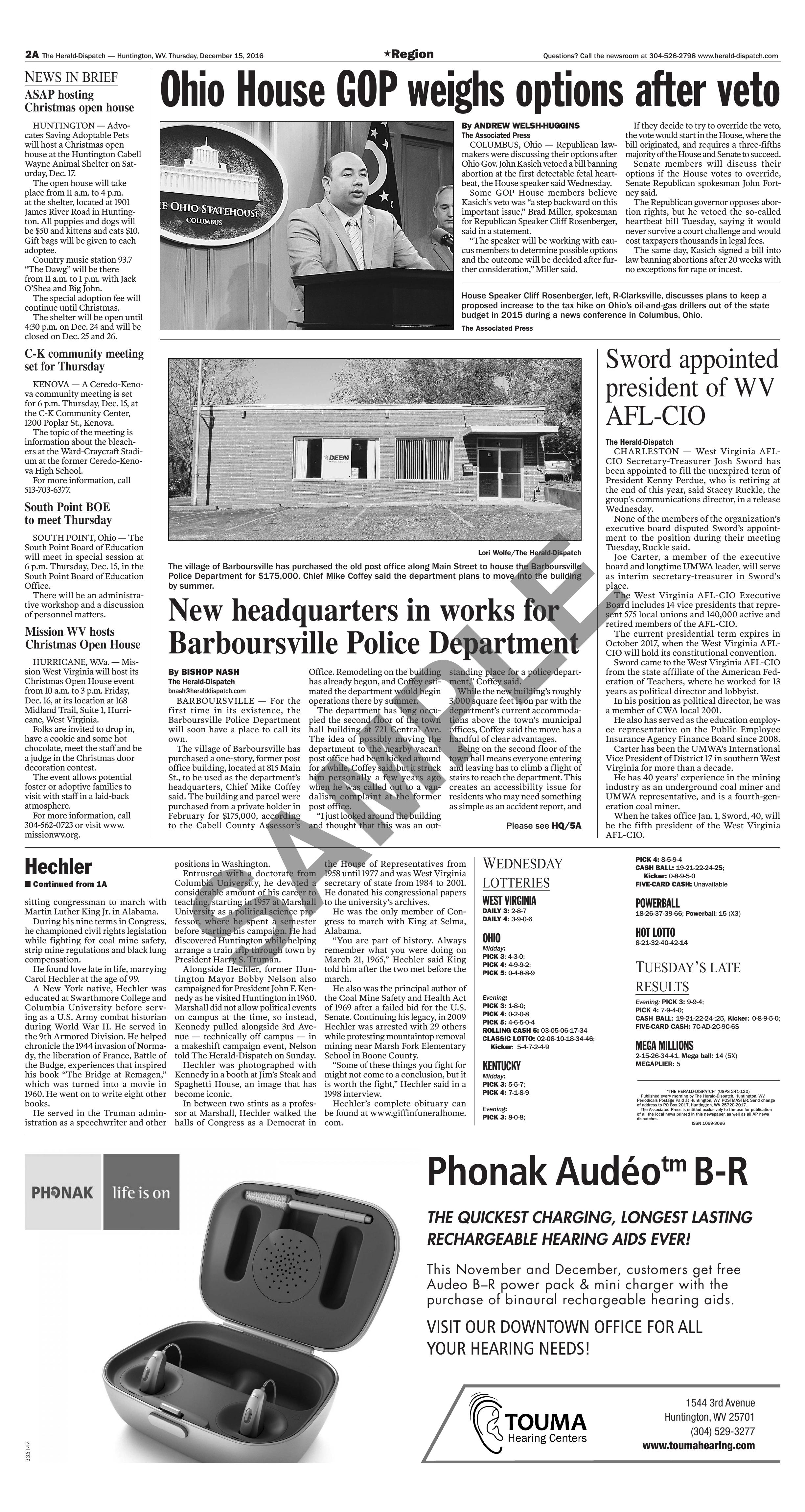