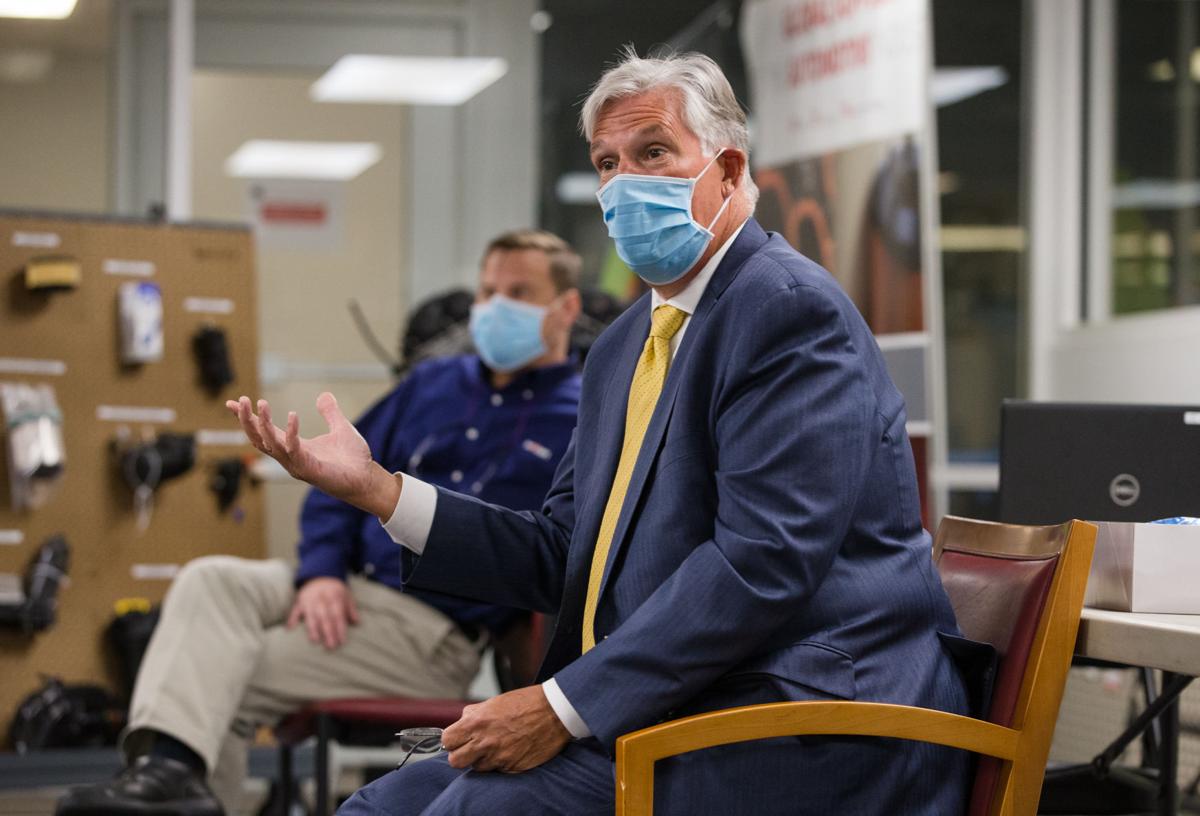 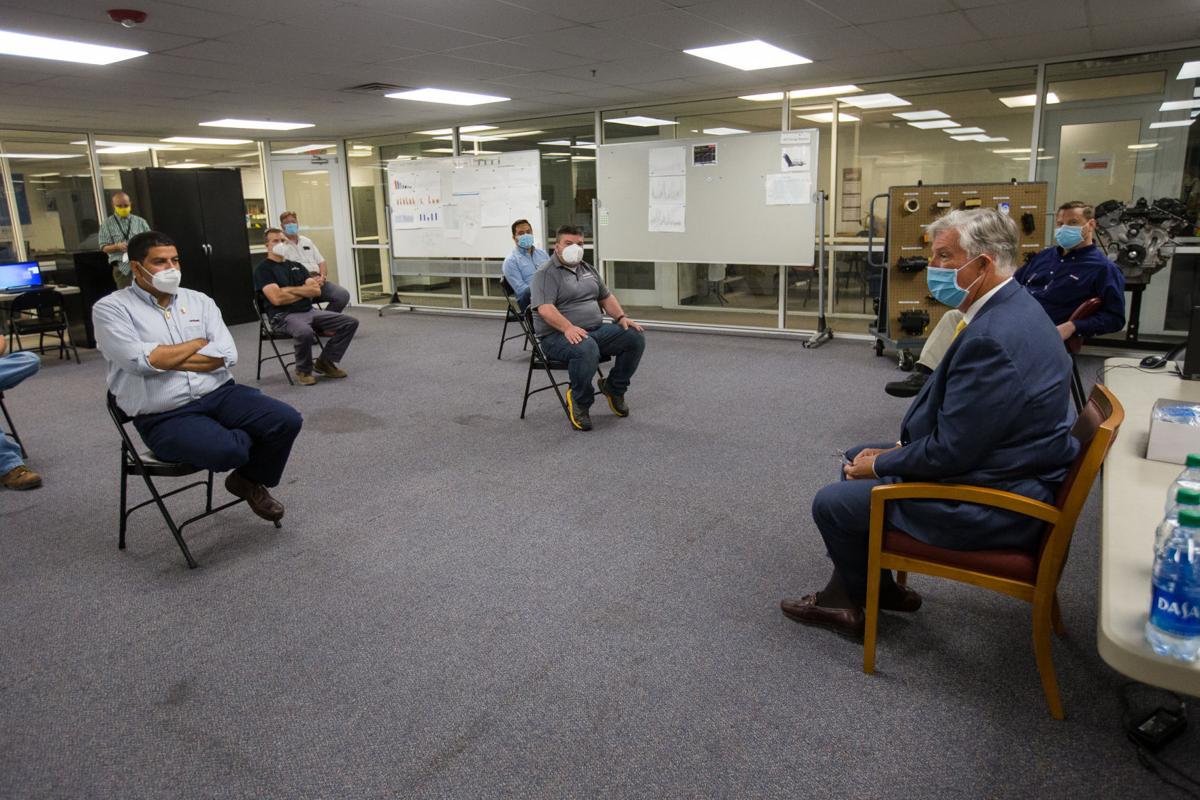 Woody Thrasher, right, a Republican candidate for West Virginia governor, speaks with Sogefi USA Inc. employees during a tour of the plant on Wednesday, June 3, 2020, in Prichard. 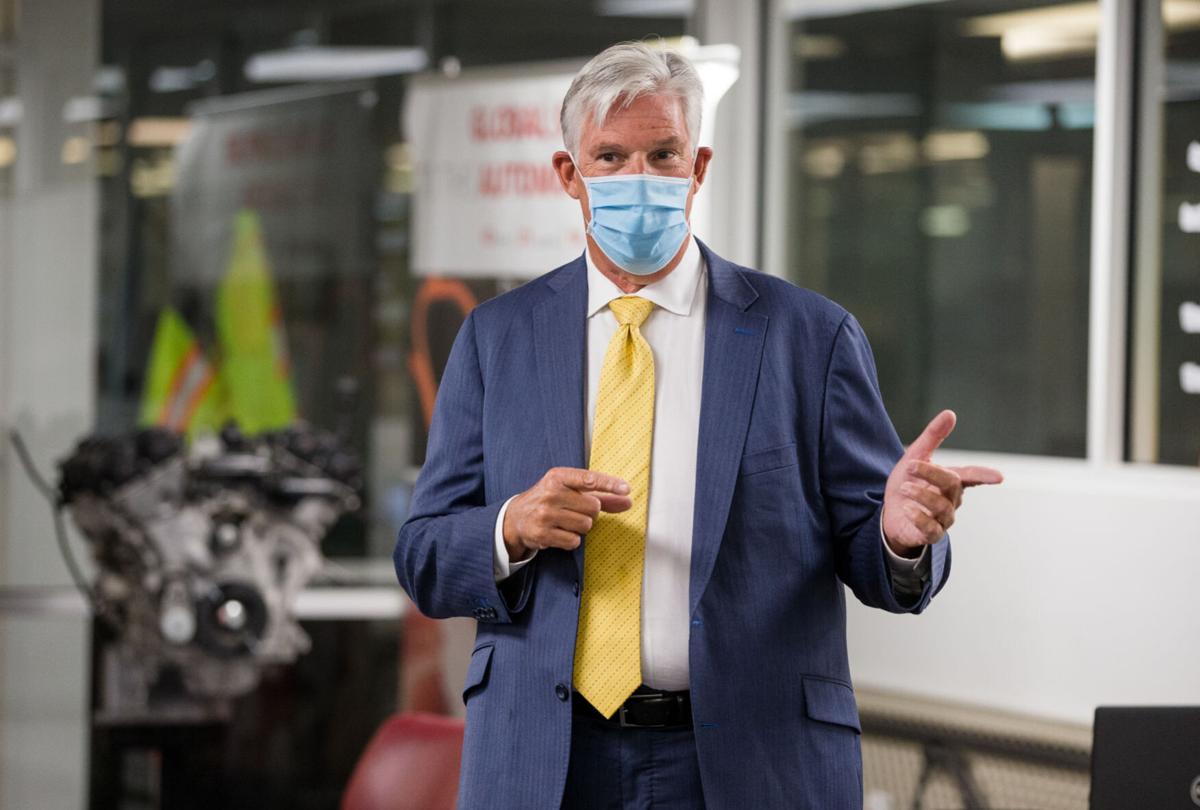 Woody Thrasher, right, a Republican candidate for West Virginia governor, speaks with Sogefi USA Inc. employees during a tour of the plant on Wednesday, June 3, 2020, in Prichard.

PRICHARD — After recently being endorsed by the West Virginia Manufacturers Association, Republican gubernatorial candidate Woody Thrasher made a stop at the Sogefi plant at Prichard on Wednesday.

“Manufacturers represent a whole lot of employees throughout West Virginia doing a wide variety of things, so this endorsement is significant,” Thrasher said.

Thrasher, who is from Clarksburg, said his visit to the Sogefi plant is part of several campaign trail visits to facilities across the state.

If elected, Thrasher said he would diversify the state’s economy.

“I have broken up the state into five segments, and I think each has its own opportunities, like the airline industry where I am from in north-central West Virginia to the petrochemical industry in the Northern Panhandle,” he said. “Also, companies that need urban markets in the Eastern Panhandle, and we should be trying to figure out how to extract rare-earth minerals from southern West Virginia.”

“This state is in worse shape than when he took office,” Thrasher alleged. “We are at all-time lows as far as coal mining and oil and gas, the two things our state depends upon. He has done nothing to diversify this economy, and we cannot afford four more years of Jim Justice’s leadership.”

Officials with Sogefi, an Italian company with 43 plants in 23 countries around the world supplying auto parts to companies such as Ford, General Motors, Fiat/Chrysler, Toyota, Volkswagen and Subaru, said while the company doesn’t endorse candidates for office, they are always open to visits from them.

“We always enjoy hosting candidates for political office and our elected officials, including local, state and federal,” said Troy Thomas, plant manager with Sogefi USA Inc. “It gives our employees a chance to meet and engage with the candidates that may represent them.”

Endorsements roll in for Swearengin

COAL CITY, W.Va. — Democrat Paula Jean Swearengin, a coal miner’s daughter and granddaughter who fights for clean water, clean air and a diverse economy, received additional endorsements in her bid for one of West Virginia’s U.S. Senate seats heading into the June 9 primary.

In the past two weeks, Swearengin has added Progressive Democrats for America, Forward Thinking Democracy, and r/SandersforPresident, a Reddit group with more than 500,000 members, to the list of organizations that have thrown their support behind her run to unseat Sen. Shelley Moore Capito, R-W.Va.

“This campaign has always been about the movement for a better future,” said Swearengin, who launched a GOTV tour throughout the state June 1. “I am grateful to have the support of these groups and especially of the people of West Virginia. I am proud of what this campaign has accomplished so far, and I know we will defeat Capito in November.”

In addition to those announced recently, organizations both local and national that have signed on to support Swearegin’s campaign include: Brand New Congress, Blue America, Flip the Senate, Save Main Street, Progressives Rising, Future Generations, Women for Bernie, Silvers for Sanders, 90 for 90 and the Eastern Panhandle Green Coalition.

The West Virginia primary is slated for June 9.