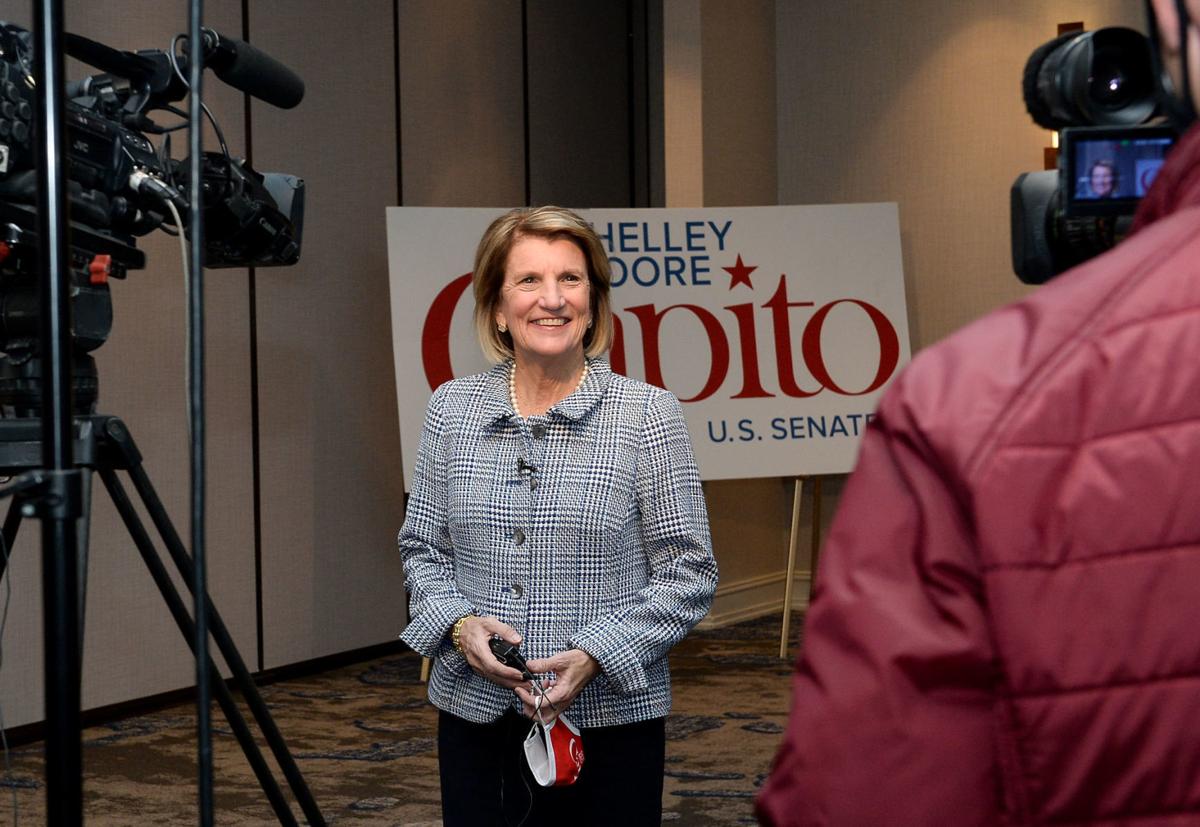 Shelley Moore Capito talks to the media at Embassy Suites after winning re-election to the U.S. Senate on Tuesday night. 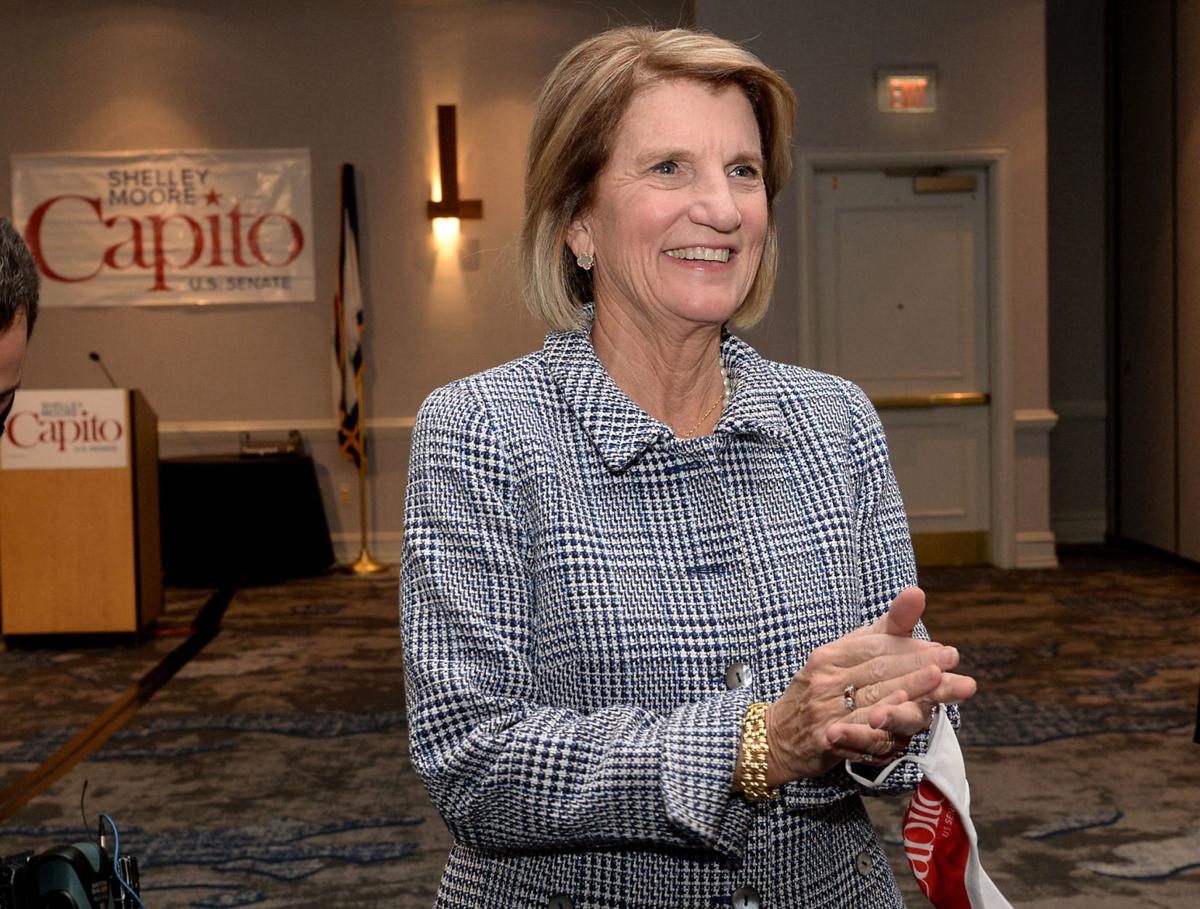 Shelley Moore Capito celebrates at Embassy Suites after she won re-election to the U.S. Senate on Tuesday night. 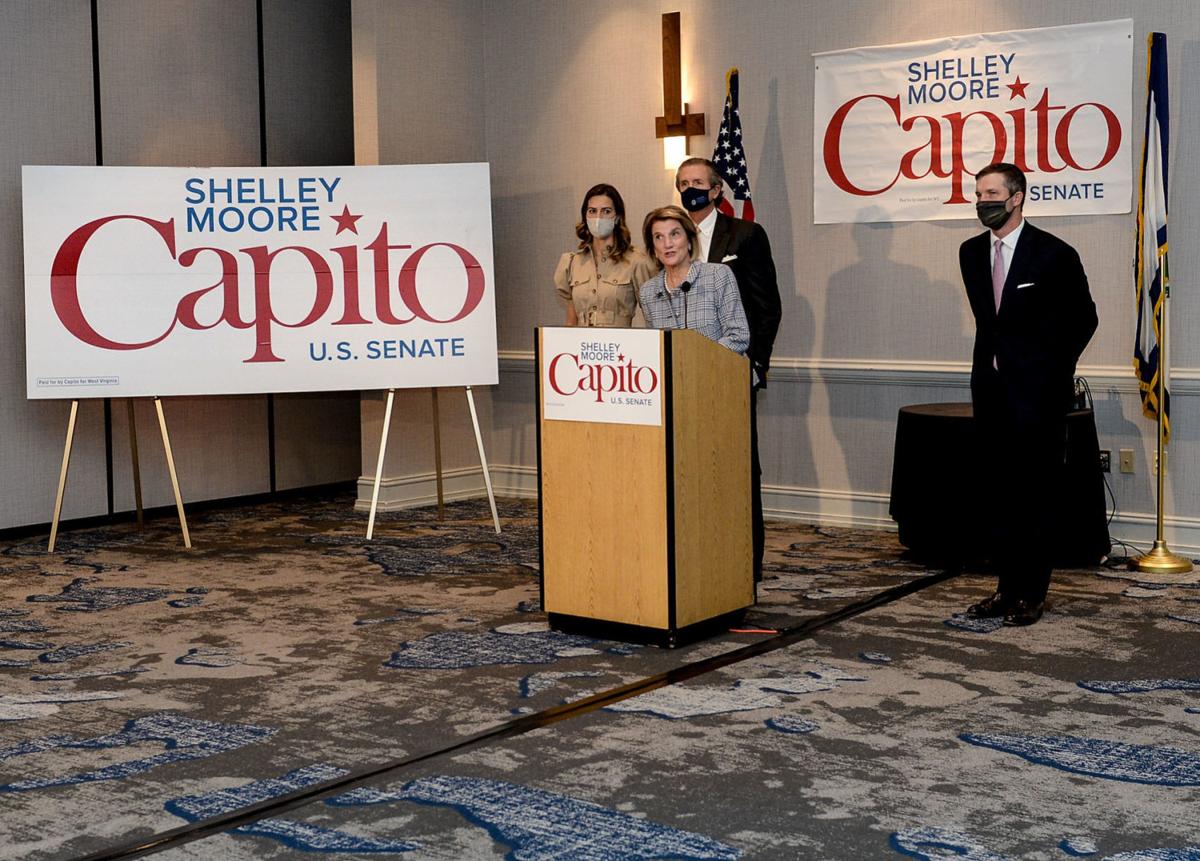 Shelley Moore Capito speaks to the media standing with her husband, Charles, daughter, Shelley Capito Macleod, and son, Moore Capito, right, at Embassy Suites after she won re-election to the U.S. Senate on Tuesday night.

Shelley Moore Capito talks to the media at Embassy Suites after winning re-election to the U.S. Senate on Tuesday night.

Shelley Moore Capito celebrates at Embassy Suites after she won re-election to the U.S. Senate on Tuesday night.

Shelley Moore Capito speaks to the media standing with her husband, Charles, daughter, Shelley Capito Macleod, and son, Moore Capito, right, at Embassy Suites after she won re-election to the U.S. Senate on Tuesday night.

As of 10 p.m. with more than three-fourths of precincts reporting, Capito had captured 437,673 votes to Democrat Paula Jean Swearengin’s 176,964 and Libertarian David Moran’s 17,118, according to MetroNews.

“I’m very grateful and honored to again earn the privilege of representing the people of West Virginia, and I’m anxious to go back to work doing just that,” Capito said. “I don’t take anything for granted ever when I’m in a race, and this one was no different. Now it’s time to get back to doing the things I’ve talked about over the last few months.”

Capito was elected to the Senate in 2014, becoming the first woman to hold the office in West Virginia and the first Republican in the state elected to a full term as senator since 1942. Prior to that, she served in the U.S. House of Delegates, representing West Virginia’s 2nd Congressional District from 2001 to 2014.

Swearengin, a community activist from Mullens, previously challenged Sen. Joe Manchin, D-W.Va., in the 2018 primary. Moran is an alpaca and sheep farmer from Preston County who ran for governor in 2016. Swearengin’s campaign focused on majority-leftist policies, such as enacting a Green New Deal, universal health care and instating a prevailing wage, among other things.

Capito was challenged in her primary by Allen Whitt, president of the West Virginia Family Policy Council, a religious-right organization with a long list of anti-LGBTQ views. Whitt criticized Capito for not being more conservative. Swearengin did the opposite, criticizing Capito for not representing all of West Virginia in her time as senator.

Capito said Tuesday she doesn’t care much for being pulled one way or the other.

“I’m a doer. I like to have accomplishments, not for me but for the state. I like to have action. If you only stand on hard, fast preconceived notions, you’re never going to get anywhere,” Capito said. “I don’t worry too much what’s right or what’s left. I’ve been honest with the people of West Virginia, I’ve been very accessible, and that gives them a reassurance even if they disagree with me. I believe they know my heart is with West Virginia.”

In recent weeks, Capito has drawn both criticism and support for her vote to confirm Amy Coney Barrett to the U.S. Supreme Court.

Capito faced similar reaction to her votes against impeachment or censure for President Donald Trump, whom Capito has supported more often than not.

In the immediate future, Capito said the most pressing work for the Senate will be passing another COVID-19 relief package. In the long term, she said, she wants to see continued efforts to expand broadband and other infrastructure in the Mountain State, as well as investing in projects that will lend opportunities to West Virginians.

“No matter who is in charge, our issues will remain the same. It’s probably the approach that changes, but a lot of my biggest issues are bipartisan, and either way, I’m not worried,” Capito said. “With more seniority comes more power, and I’ll know how to exercise that for the next six years.”