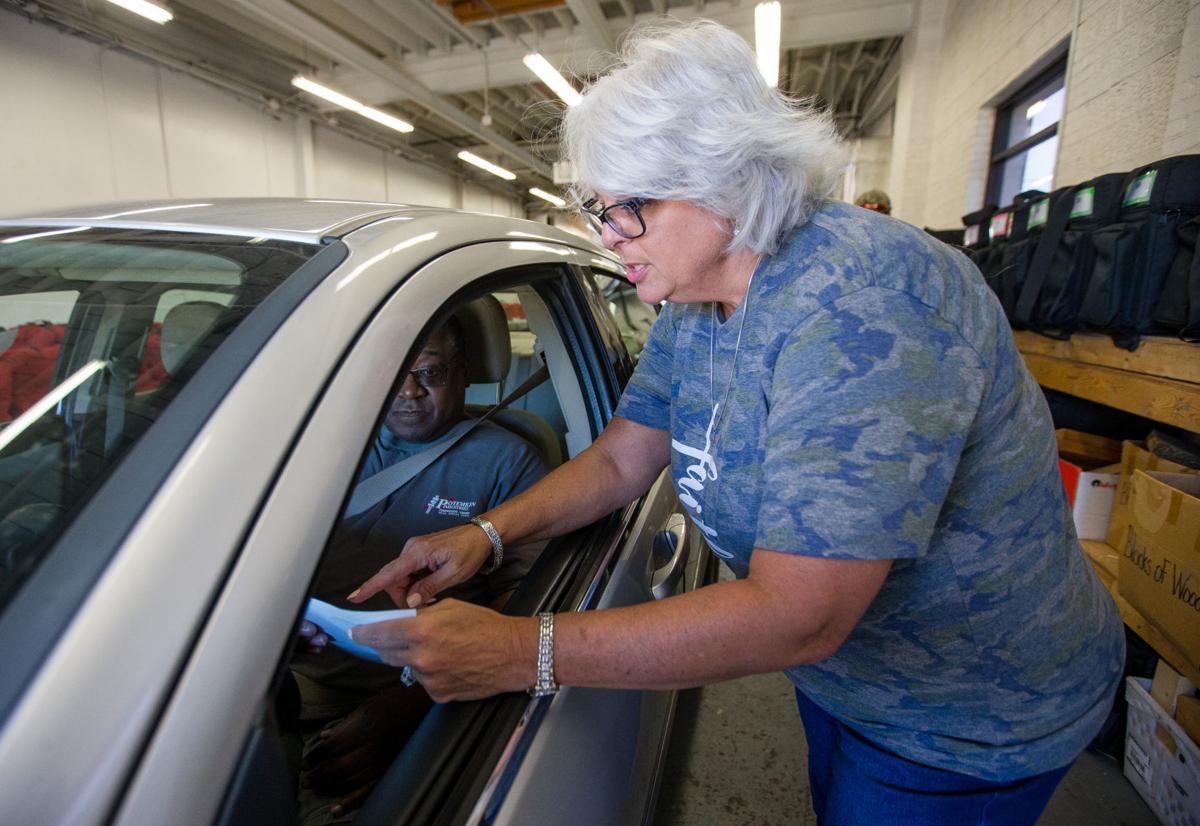 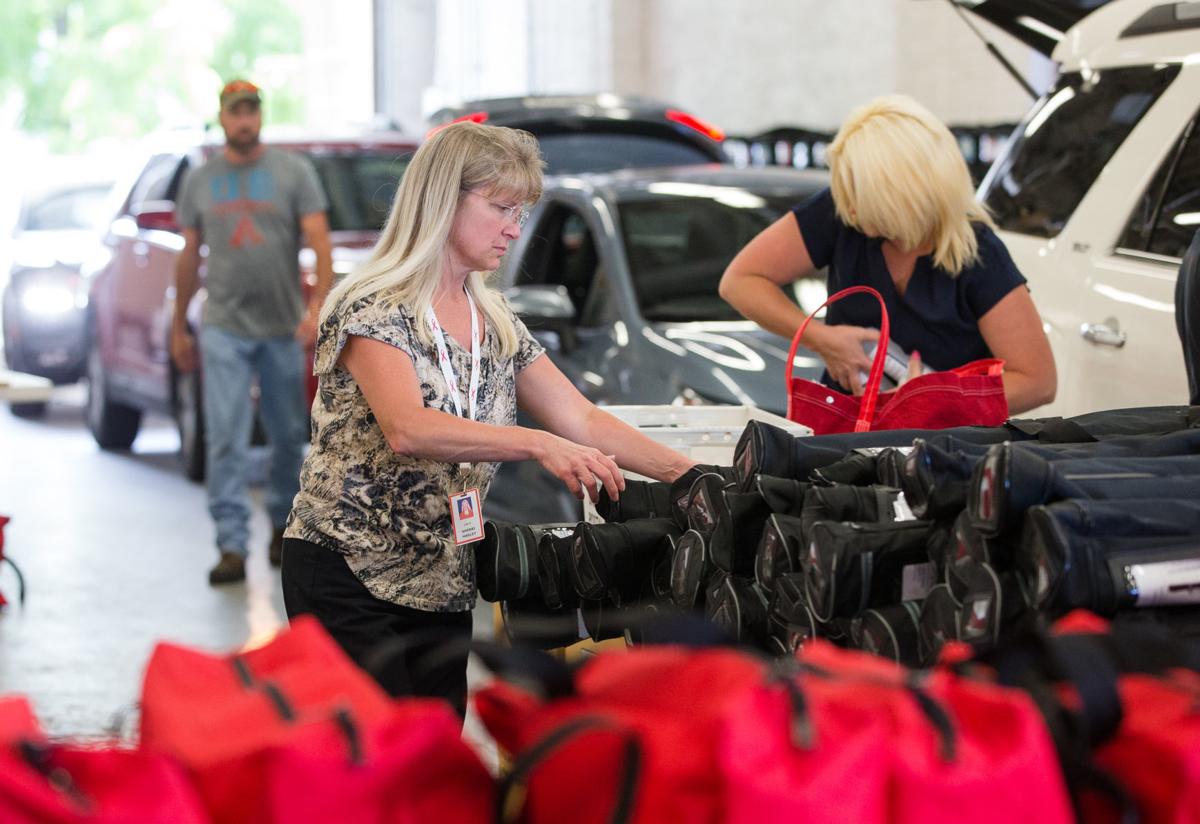 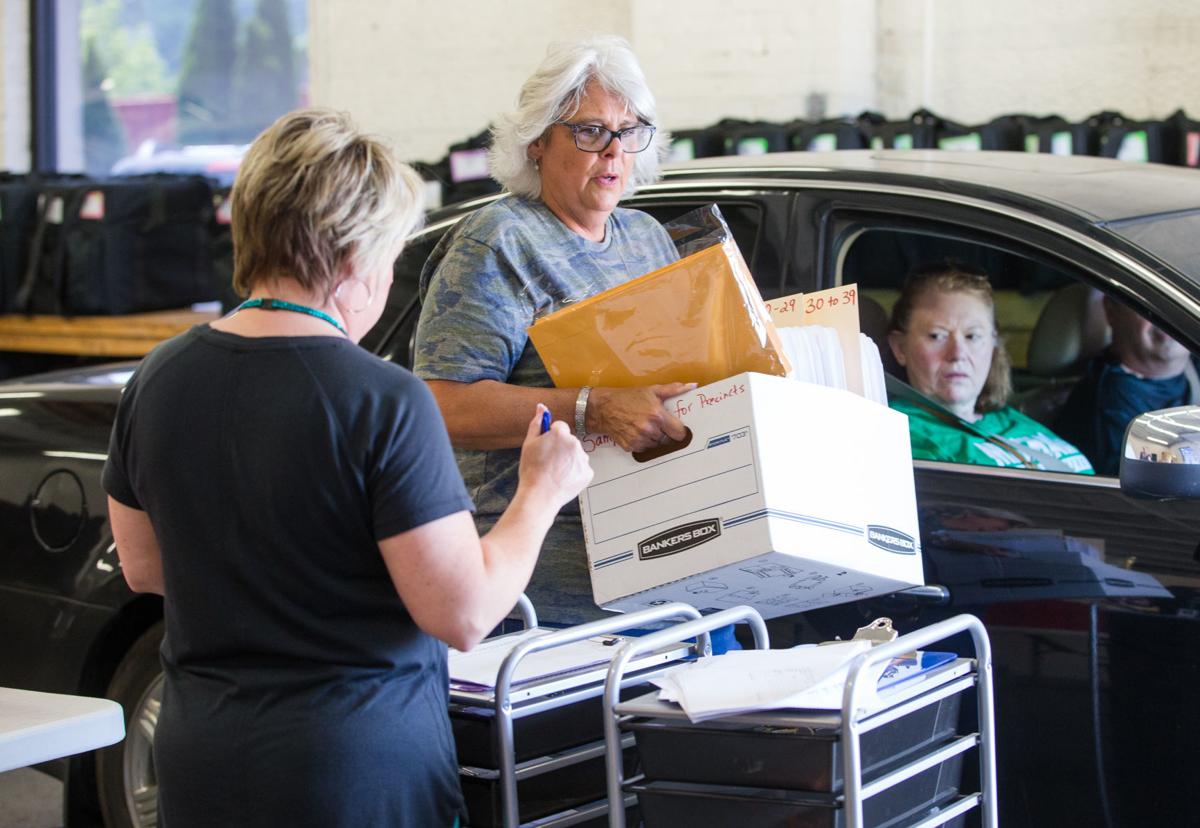 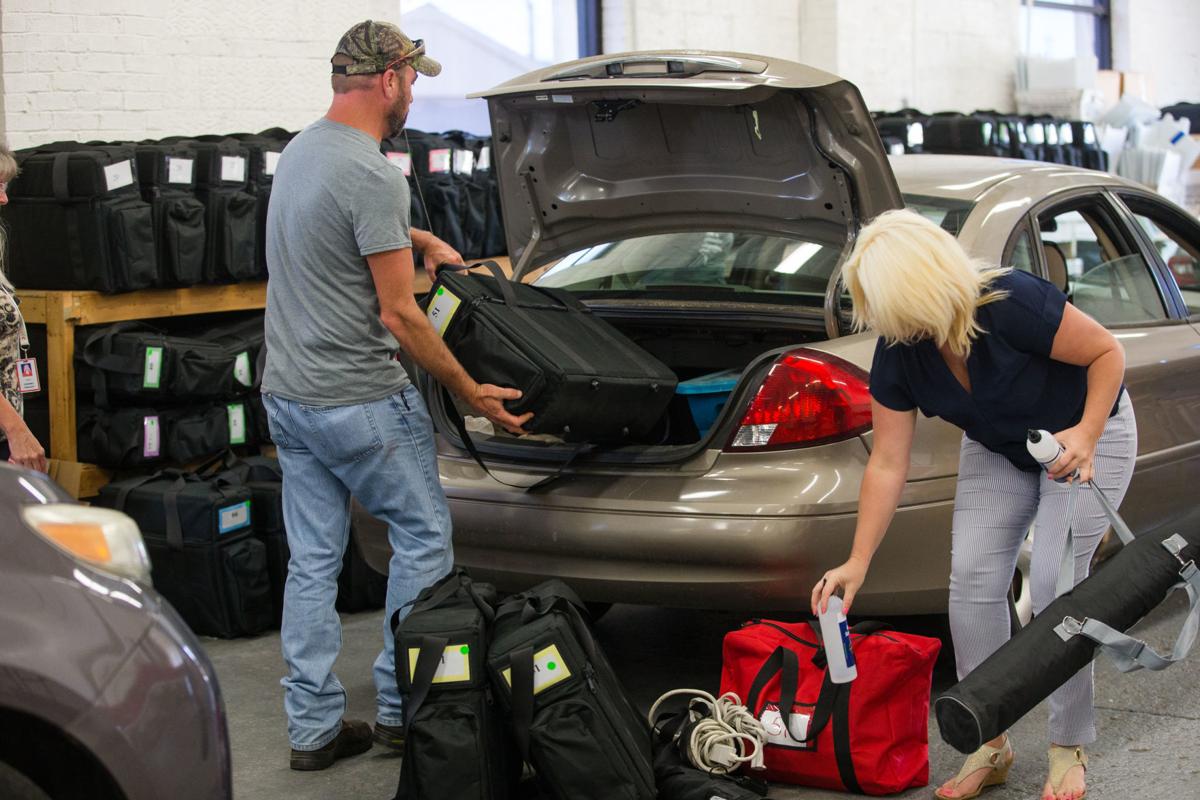 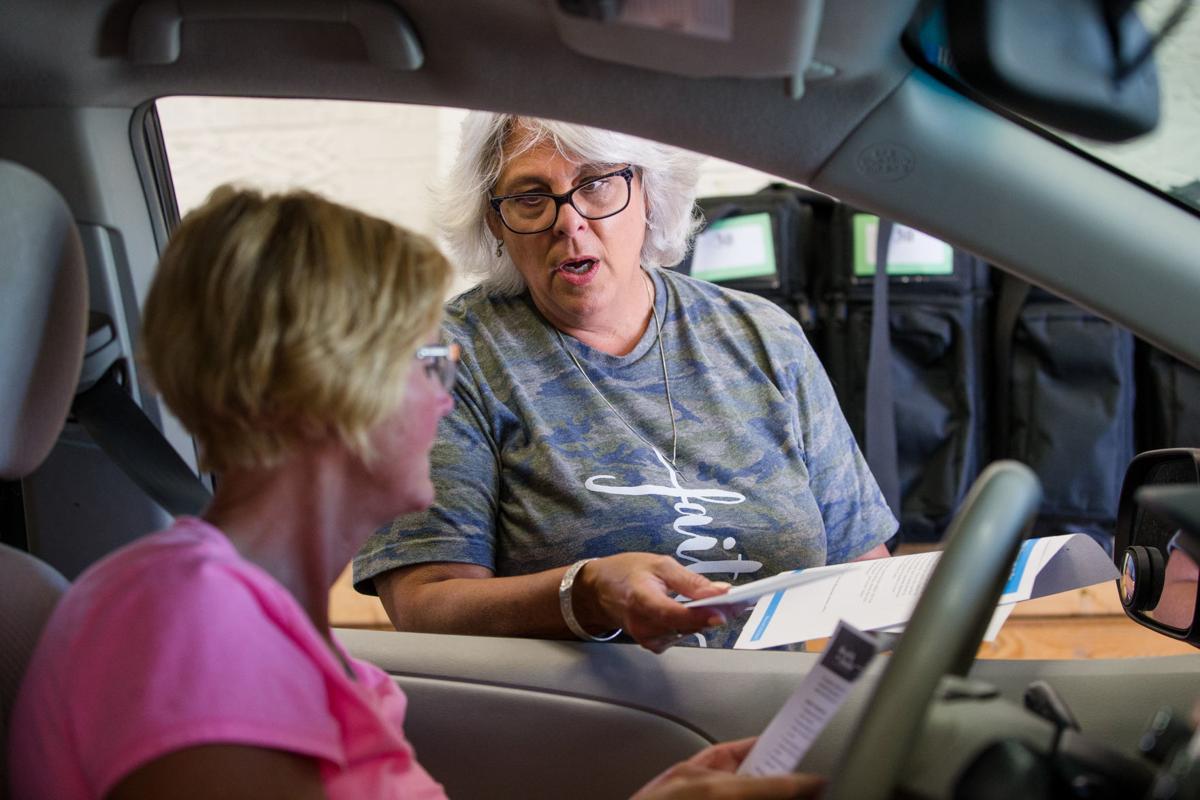 Stacy Neace, right, goes over information with a poll worker as the Cabell County Clerk’s office distributes election equipment on Monday in Huntington. 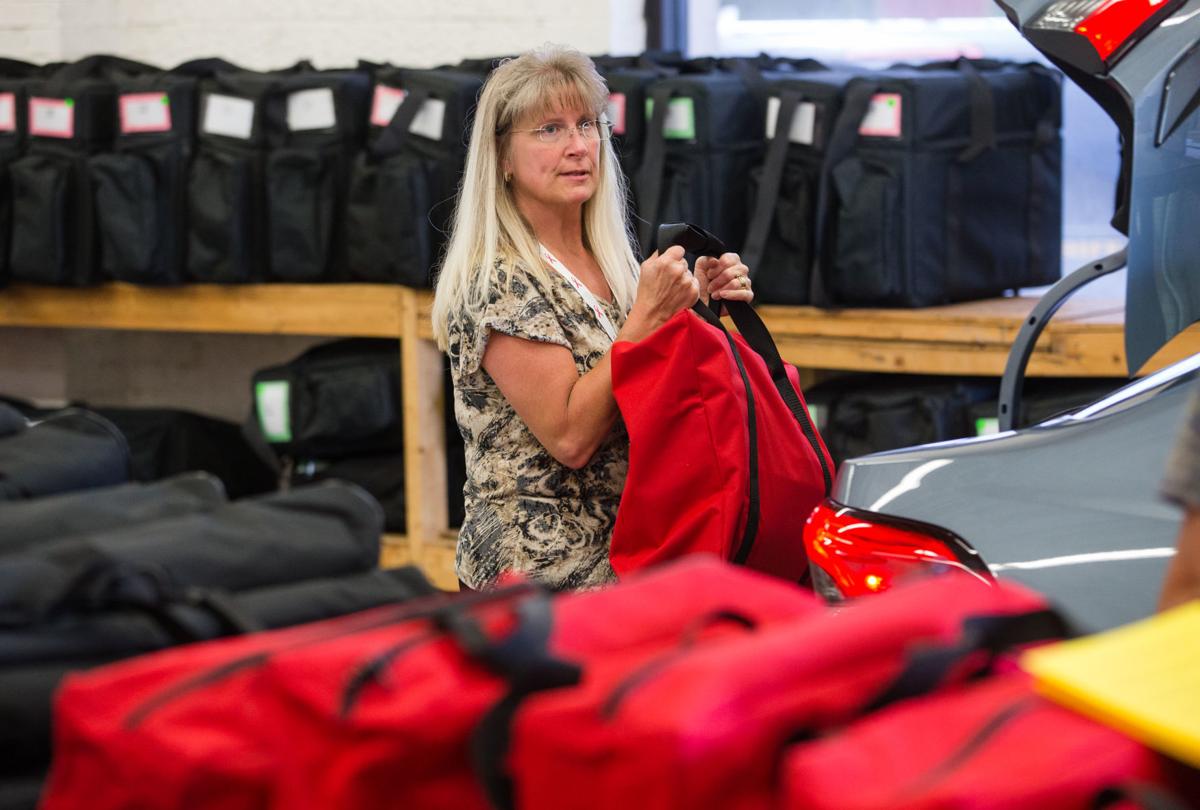 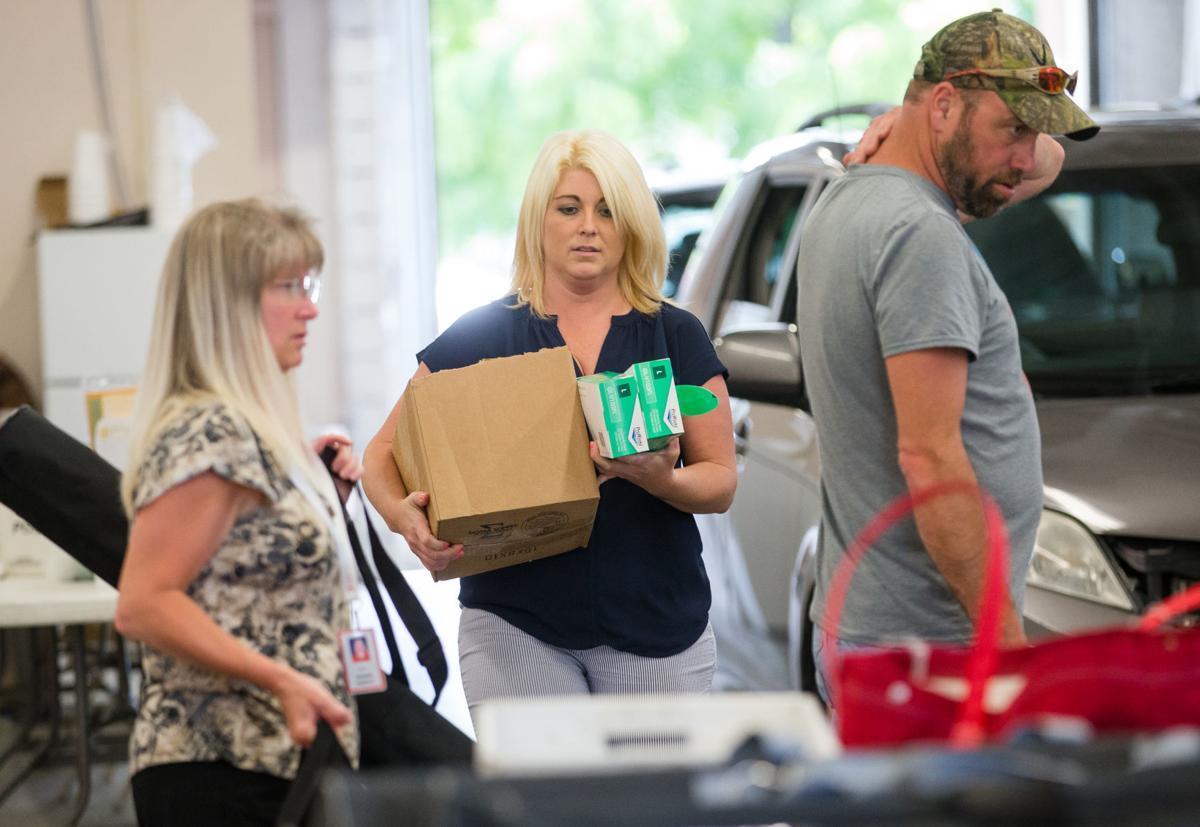 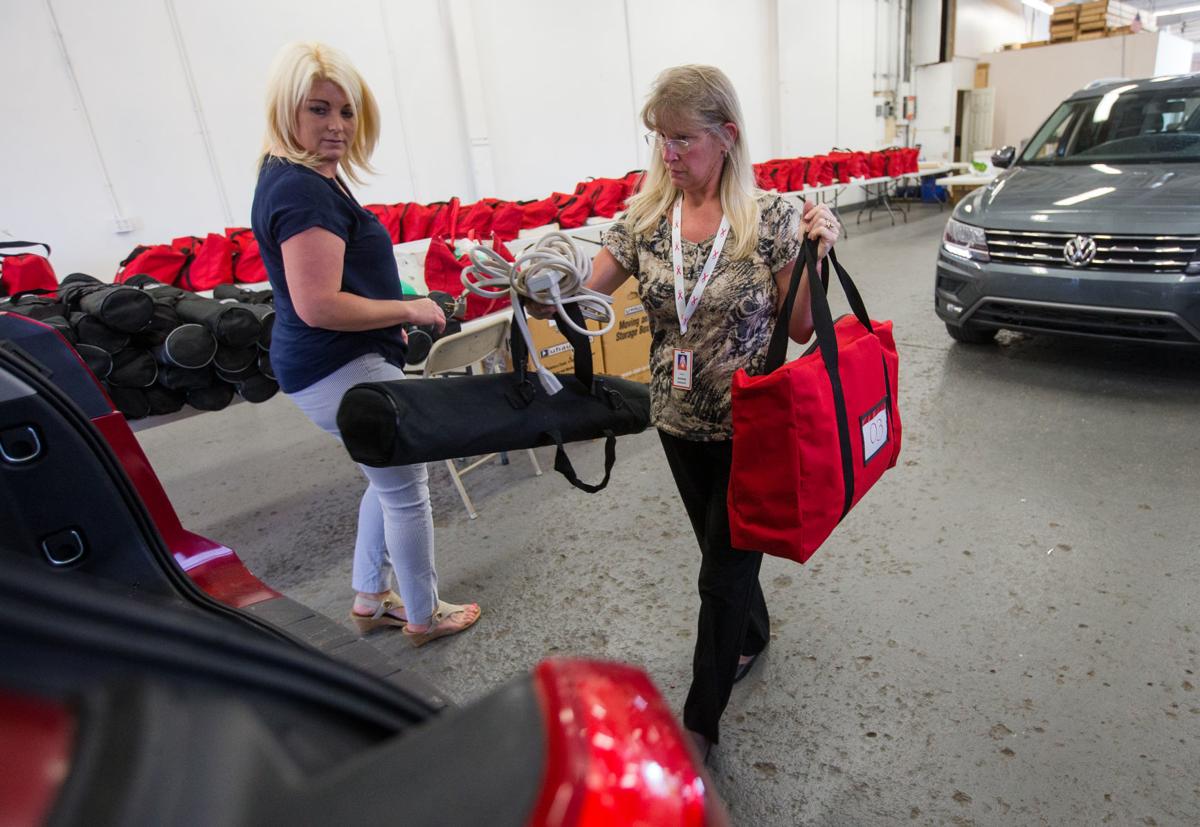 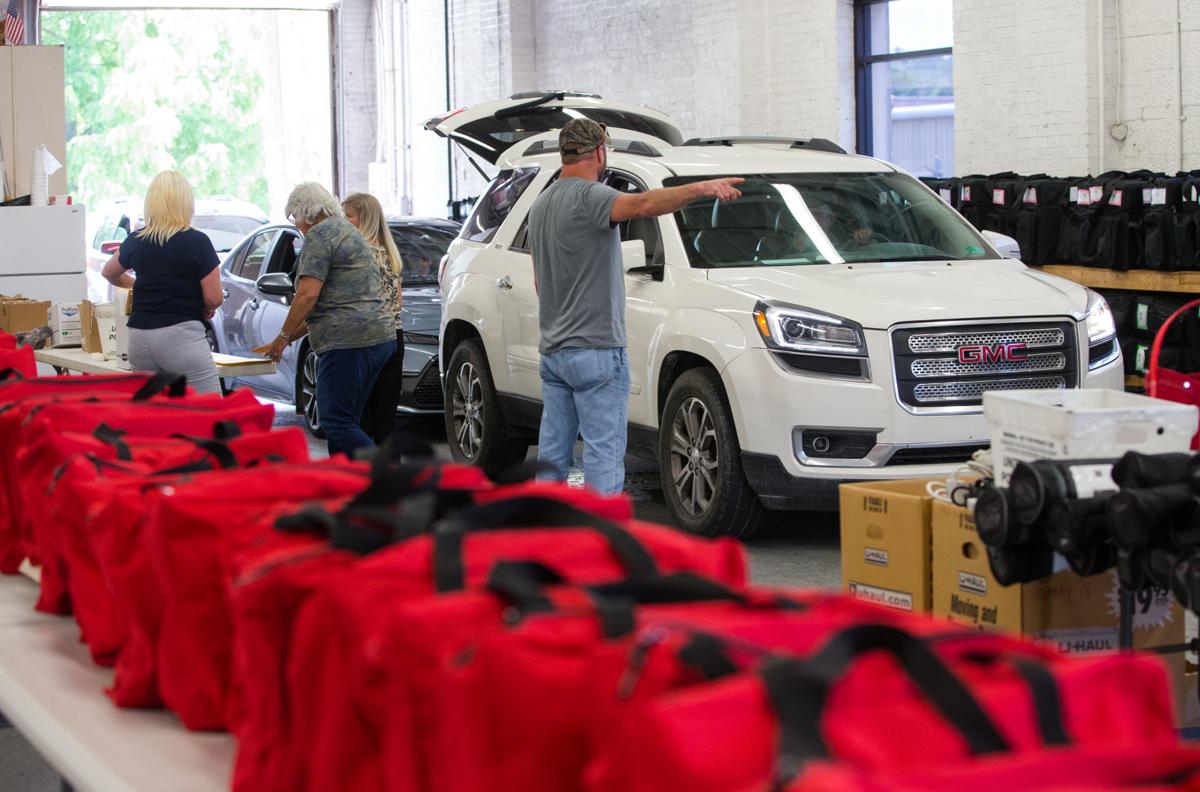 Stacy Neace, right, goes over information with a poll worker as the Cabell County Clerk’s office distributes election equipment on Monday in Huntington.

What he does have is a set of numbers showing him that, as of Monday, one day before the election, nearly 250,000 votes had been cast.

That’s 16.4% of registered voters in West Virginia, and a good indication that the state is likely to meet, and could exceed, the 495,407 ballots cast during the 2016 primary election, Warner said Monday.

“We want to make it easy to vote, and certainly people have been taking advantage already,” Warner said Monday between meetings preparing for Election Day.

Breaking down the numbers, 42,400 people voted during the early voting period from May 27 to June 6, according to the secretary of state’s website.

Absentee ballots will be accepted until June 15, as long as the ballot is postmarked for Tuesday, June 9.

As of Monday, absentee voting had exceeded past numbers, with voters taking precautions during an election cycle in the middle of a global pandemic.

Other precautions will extend into Election Day at local polling places, where Warner said poll workers routinely will be cleaning voting equipment and will have personal protective equipment, including masks and gloves available for voters who might need them. Wearing masks or any other personal protective gear is not required to vote, meaning it’s optional for voters and poll workers if they want to wear masks or other gear.

Warner also said Q-Tips will be available for people who might not want to touch voting machines and that voters are welcome to bring their own pens, with black or blue ink, if that makes them feel more comfortable to vote.

Warner said he hopes people who haven’t yet voted will feel comfortable enough to do so, especially given the weight of this year’s elections.

“It’s an extremely important election,” the secretary of state said. “People have felt comfortable enough to go to Kroger or Walmart. They should be more than comfortable to go to a polling location that’s also being sanitized and properly has PPE in place for both the poll workers and for the voters.”

For more information about voting, including frequently asked questions or the means to report possible voter fraud, visit www.GoVoteWV.com.

Majority of the Supreme Court

Warner noted that the West Virginia Supreme Court race is among the most significant during the primary election, since voters have the opportunity to put a majority of the five-member court onto the bench.

Voters will pick two justices who will serve regular 12-year terms on the court. Those are the Division 1 and Division 2 races, and the people elected to those seats will begin serving on the court in January 2021.

A third seat, the Division 3 race, is to serve the rest of what was former justice Allen Loughry’s term on the court. That term will expire in 2024, and the person elected for that seat will begin serving as soon as they can be sworn in.

In Division 1, Chief Justice Tim Armstead is in his first reelection campaign since West Virginians voted him onto the bench in 2018 to finish what had been former justice Menis Ketchum’s term.

In Division 3, Justice John Hutchison is seeking election to the seat Gov. Jim Justice appointed him to in December 2018. Challenging Hutchison in the race are Jackson Circuit Judge Lora Dyer and Charleston lawyer Bill Schwartz.

Gov. Jim Justice, who was elected as a Democrat in 2016, is running his reelection bid as a Republican.

Running in the GOP primary for governor are:

Even without an incumbent, the Democrat ticket also is full of people who say they are ready to hold the state’s highest executive public office:

Precinct 8 will vote at the Museum of Radio & Technology, 1640 Florence Ave. in Huntington.

Precinct 63 and 64 will vote at Milton Middle School, 1 Panther Trail in Milton.