A 1941 Cadillac pulls through the crowd in Fairport, N.Y. 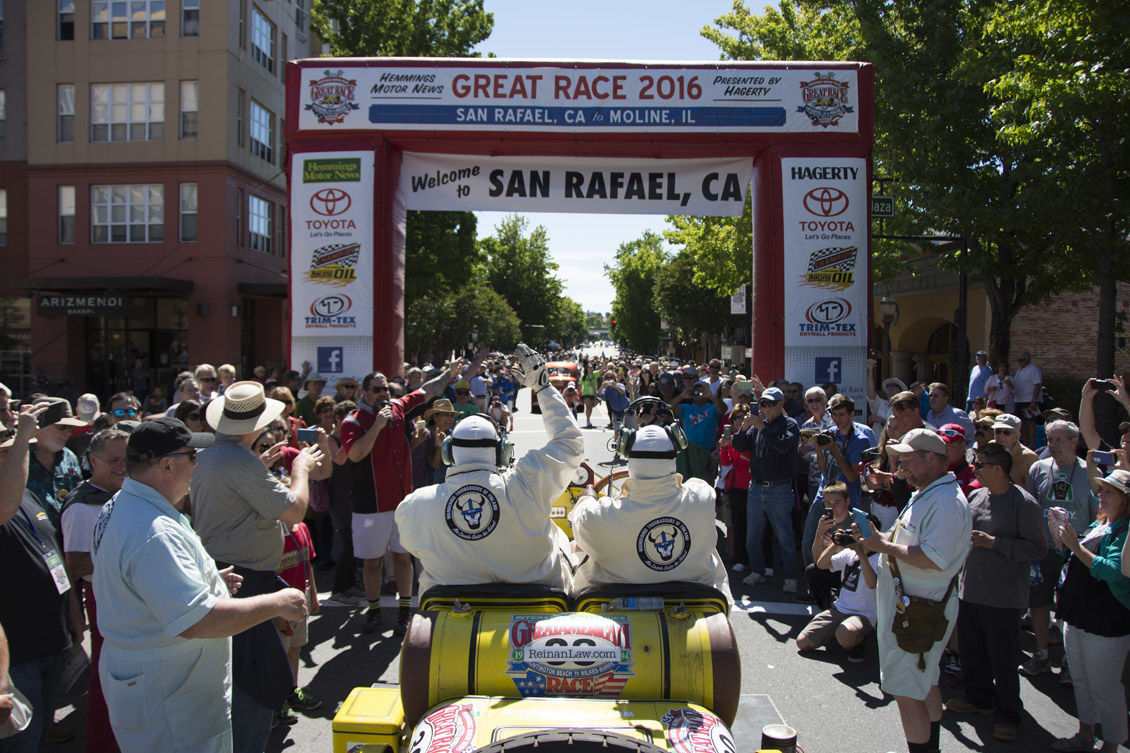 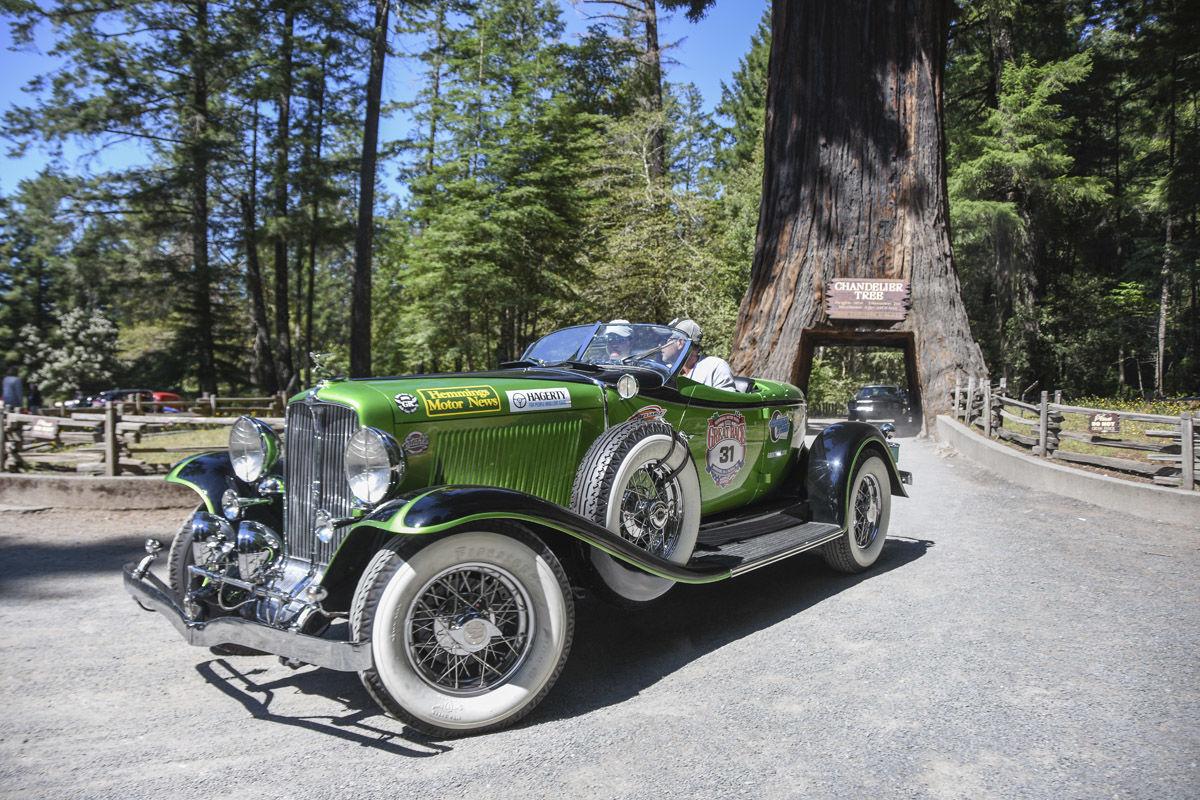 A 1931 Auburn passes through the Chandelier Tree in Leggett, Calif. 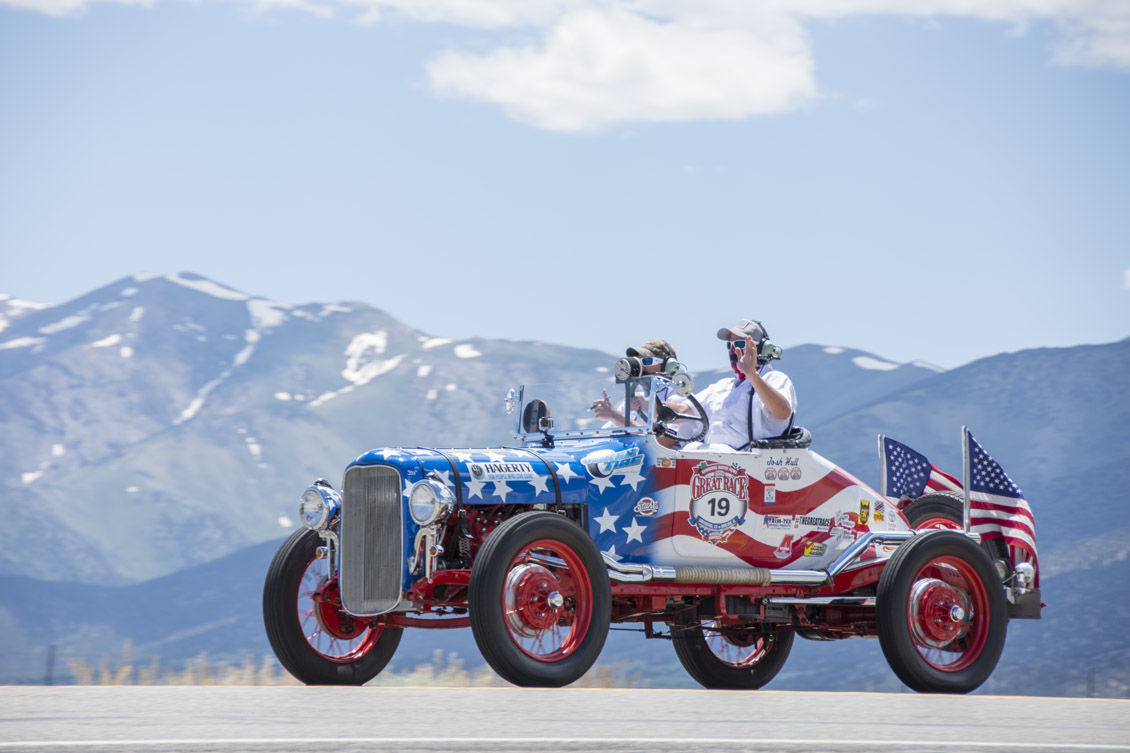 Shown is the 1932 Ford Dirt Track Racer of Trevor Stahl and Josh Hull in Wyoming.

Dan and Pat Martin in their Corvette are shown driving up Mount Washington in New Hampshire.

A 1941 Cadillac pulls through the crowd in Fairport, N.Y.

A 1931 Auburn passes through the Chandelier Tree in Leggett, Calif.

Shown is the 1932 Ford Dirt Track Racer of Trevor Stahl and Josh Hull in Wyoming.

Dan and Pat Martin in their Corvette are shown driving up Mount Washington in New Hampshire.

HUNTINGTON — Beginning in San Antonio, Texas, and ending up in Greenville, South Carolina, the Great Race is an event that hearkens back to a day when adventure racing with automobiles captivated the imagination.

With only cars made in 1974 or earlier being eligible for the contest, this event finds the competitors driving on back roads and public roads in sections as they compete for the win and prize money.

The Great Race takes place over nine days, with daily stops made in various small towns and cities along the way. Huntington has been chosen as a stop on the course, but that visit has been delayed, as has the entire race, which has been postponed for two months.

Due to the coronavirus pandemic, the Great Race was forced to move the start of the competition from June to August, making sure that hotel rooms and other considerations were available for the drivers considering the various public safety orders of each state.

Now, with the event taking place from Aug. 22-30, the drivers will be rolling into the Tri-State on Aug. 28. At approximately 11:40 a.m., the competitors will appear at the Visitor’s Center and Red Caboose in Heritage Station on 11th Street in downtown Huntington.

After taking a break for lunch, with all 150 vintage cars on display to the public, the Great Race will then leave Huntington and make its way to the New River Gorge area. There, the competitors will cross the world-famous New River Gorge Bridge before driving down to the river, which is considered the second-oldest river on Earth. Then, they will finish the day’s competition in Word Park in nearby Beckley.

“It has been just like everything else concerning this pandemic, as in you have to play the hand you’re dealt, and we are trying to make the best of it,” said Great Race director Jeff Stumb.

“The race was not going to work in June because things were just starting to open up around the country then and it takes a lot of hotel rooms and a lot of food to handle our group of drivers. The total entourage, including the 150 car entries, adds up to over 400 people, and that includes race officials.”

By limiting the Great Race to vehicles made in 1974 or earlier, the competition reflects what many consider to be the golden age of pre-computer-driven cars.

“The pre-World War II cars, including the Model A’s and the 1930s Fords and more, they are all stock as far as what is under the hood,” said Stumb. “The 1950s, 1960s and early 1970s cars can have some modifications. But for the most part, most of the cars are stock with different classifications. This is a time, speed and distance rally and when the contestants are driving down the road, they do not know where the secret checkpoints will be. The older your car is, the more of a handicap you will get off of your score, because a 1929 Model A is going to have a more difficult time on the course than a 1969 Camaro.”

There is a waiting list of about 20 months to get into the Great Race as 70% of the drivers tend to race again the next year after their inaugural run. With the race meandering for 2,300 miles over a nine-day period, the drivers have to get some rest each night and be prepared for the long haul.

Sponsored by Hemmings Motor News, presented by the Hagerty Drivers Club and run by the Coker Tire Co., along with the help of many sponsors, the Great Race is reminiscent of a time when the onslaught of the automobile changed the world forever and racing began to take shape. The vehicles featured in this year’s race range from the 1970s back to the early 1900s, with all cars using stock engines.

The prize money ranges from $50,000 for the grand champion winner to other monetary categories that add up to $158,750 in earnings.

The race is made up of the Grand Championship Division, the Expert Division, the Sportsman Division and the X-Cup Division. There are many hoops one has to go through to qualify for this competition, and all of that information can be found at www.greatrace.com.

“We start in Texas where it is flat and dry and hot, and we go up through Oklahoma and then get into those rolling hills of Missouri where it is hard to keep up that speed,” said Stumb. “We eventually end up passing through Kentucky and then we get into West Virginia, where we really experience some ups and downs on the roads. We will be going across the New River Gorge Bridge and then down to cross the river and then back up to Beckley to spend the night.”

Earlier that day, however, Huntington will be where the contest stops for lunch and where everyone can come out and see the antique vehicles in mid-race mode.

“On Aug. 28, we will be there from about noon until 2:30 p.m. or so at the Convention Center Visitor’s Center by The Red Caboose at 210 11th St. at Heritage Station,” said Stumb. “The oldest car in this year’s race was made in 1916, so there will be a lot of cool vehicles to check out.”