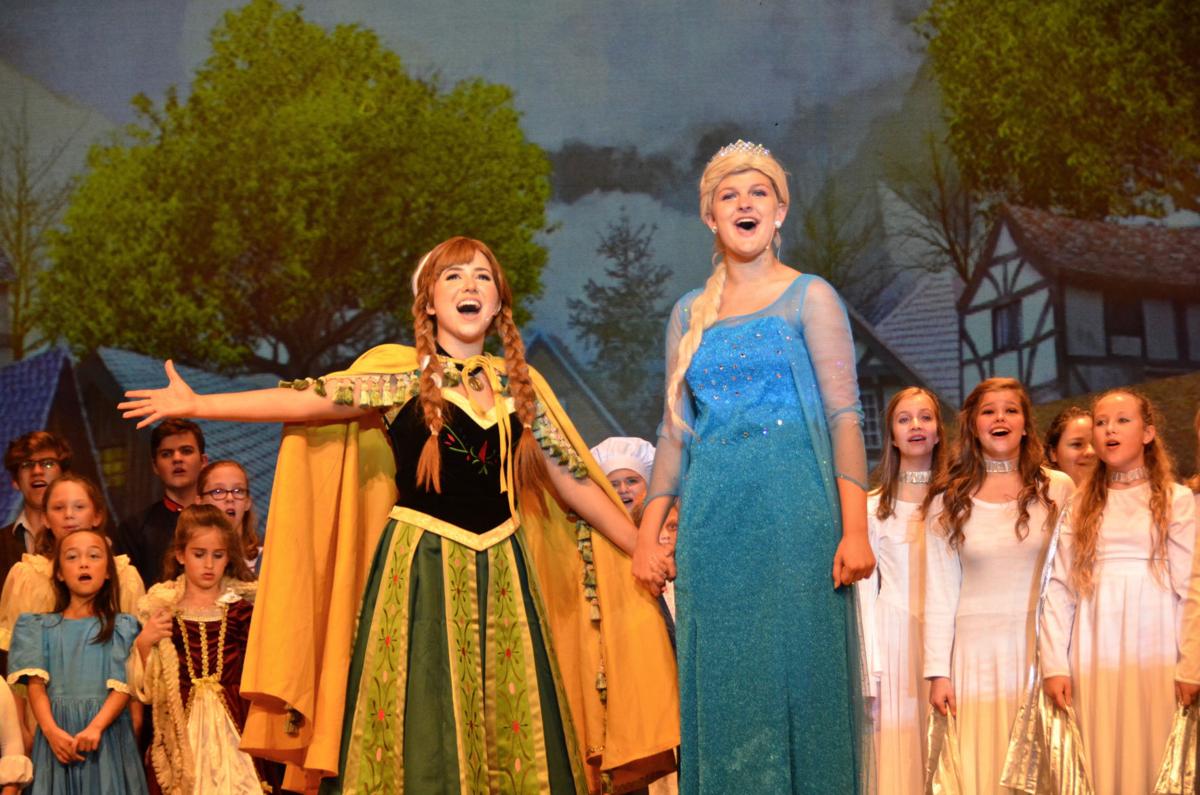 Submitted photo Nikki Riniti, left, as Anna, and Sophie Eastone, as Elsa, perform “Disney’s Frozen Jr.,” which wraps up this weekend in Huntington. 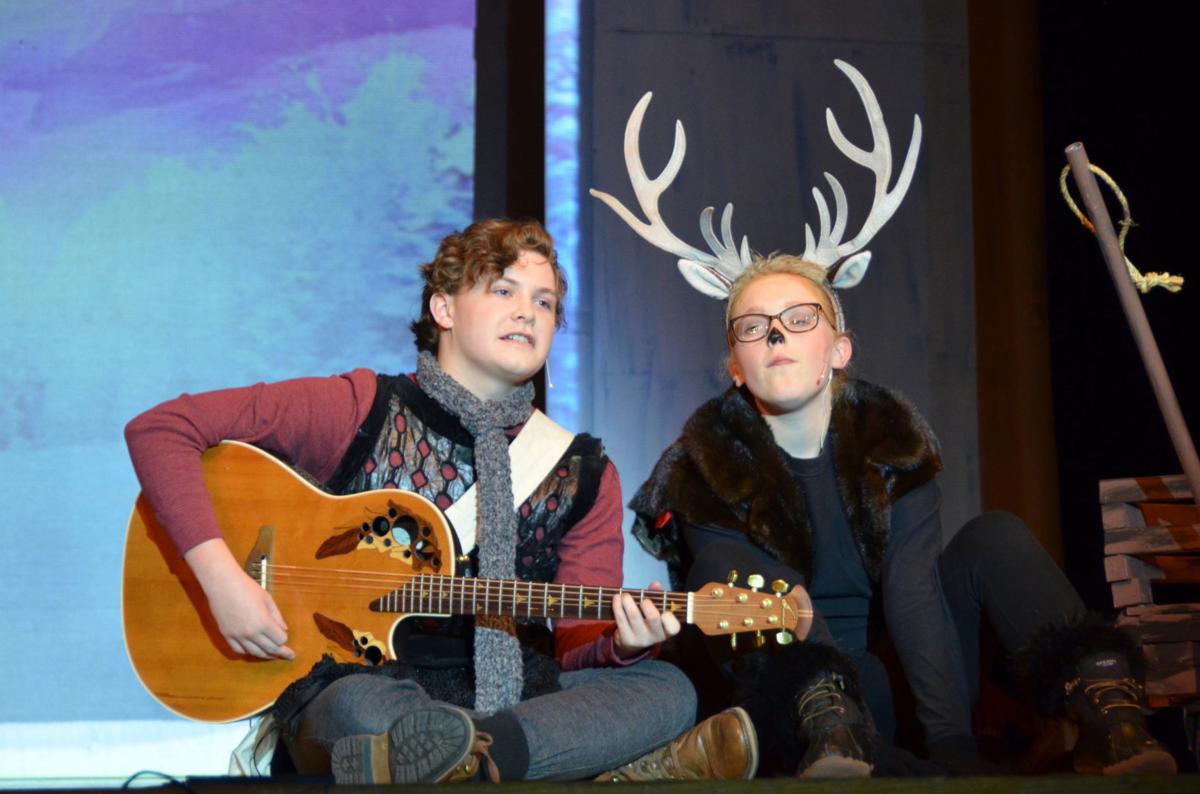 Submitted photo “Disney’s Frozen Jr.” wraps up with its final performances this weekend in Huntington.

Submitted photo Nikki Riniti, left, as Anna, and Sophie Eastone, as Elsa, perform “Disney’s Frozen Jr.,” which wraps up this weekend in Huntington.

Submitted photo “Disney’s Frozen Jr.” wraps up with its final performances this weekend in Huntington.

HUNTINGTON — Live theater is all about bringing the magic of performance to the stage, but “Disney’s Frozen Jr.” has more than its share of thrills and chills.

Based on the beloved animated film and the Broadway musical, “Frozen” tells about a storybook kingdom where the oldest daughter, Elsa, has mysterious powers of ice and snow, and when her powers run out of control, only her sister, Anna, can hope to save both Elsa and the kingdom.

The production that wraps up this weekend at Huntington High School’s auditorium is the first show in the 30th season for First Stage Theatre, Huntington’s long-running children’s theater. Performances will be at 2:30 p.m. and 7:30 p.m. Saturday, Oct. 19, and at 2:30 p.m. Sunday, Oct. 20.

Despite the “Junior” tag, this was a big show to tackle, according to director Amy Browning.

“I like a challenge, and this particular show provided an opportunity for our kids to do something new,” Browning said. “Our biggest challenge was the size of our cast — we have 72 young actors that range in age from 4 to 18 years old. That means a ton of costumes, logistics and scheduling that allows for as much stage time as possible for each one.”

Then there are the technical challenges that call for flying snow and ice, magical costume changes, forest creatures and singing snowmen.

“The technical aspects are marvelous,” Browning said. “To create magic, we are using animated projections and other stage tricks.”

The musical is probably best known for the song “Let It Go,” a powerful, heartfelt cry for independence by Elsa. It’s performed by stage veteran Sophie Eastone, who said, “I remember seeing the movie quite a few times when I was younger; I was mesmerized by it all. From the building of the castle to Elsa switching her dress in an instant, it was magical. I want to give that same magic now to the little kids in the audience and give them a mesmerizing moment, too.”

The cast is filled with a mix of (young) veteran actors and new performers. One who only recently got involved in theater is Nikki Riniti, who plays the part of Elsa’s sister, Anna. She said it’s been a great experience, and, “Playing Anna has always been a dream of mine. She’s a princess that I have grown up with and admired since I was a child, so when the opportunity arose, I was beyond excited. Anna is a naive, courageous girl who simply wants to discover life outside of the castle. She’s a high-energy, bubbly force to be reckoned with. Her determination and drive is unmatchable.”

The same is true about the cast, as they learn important life skills while working on the musical.

“The most rewarding part of this production has to be how the cast takes care of one another,” Browning said. “At times when a technical aspect doesn’t work, someone forgets their shoes for a performance or a cast member has a conflict, they jump in to help one another.”

The cast also had some guidance from a star from the Broadway show. Browning said, “We were fortunate to have Brooklyn Nelson, the original Young Elsa on Broadway and First Stage alumni, talk to our cast about her experience and mentor some of our youngest cast members.”

The cast also had a unique opportunity last Saturday as they presented a performance in a “sensory-friendly” format. The production was modified for individuals who might find a regular performance too loud, too bright or too busy.

“Our cast took great pride in our sensory-friendly show. They were excited about the opportunity and were both kind and generous with those who attended, and met them after the show for a ‘meet and greet,’” Browning said.

It was something First Stage has been working on for a while.

“We consulted with professionals in our community and at Marshall University to assure we were meeting the needs of all those who might attend,” she added. “We had Dr. Amy Carlson meet with the cast to talk with them about what to expect and how important this opportunity was for those who would attend.”

For the cast, being part of a show is a great way to learn useful life skills, including public speaking, teamwork and social skills.

Stage veteran Armaan Karimpour, who plays the part of Hans, the prince who tries to win Anna’s heart, agrees that being part of a show is a great experience for young performers, and he recommends it.

“My advice to any child who is thinking about auditioning for a future show at First Stage and hasn’t before is to go for it,” he said. “It becomes an extremely rewarding and fun affair. My time at First Stage has opened up many doors in my life, and I think it can do the same for others.”

“I started doing shows with First Stage about a year and a half ago, but I wish I would’ve started so much sooner,” Riniti added. “It’s truly the best experience, and you make so many new, incredible friends. We are a welcoming family and would love to have you.”

Eastone agreed, saying, “Theater has changed my life and helped me find something that I truly love. The atmosphere is welcoming and supportive. Every experience I’ve had has been a blast. From ensemble to lead — no matter where you’re placed, I promise you’ll leave the last show in tears, not ready to say goodbye to your new family and looking forward to more shows.”

IF YOU GO: “Disney’s Frozen Jr.” — First Stage Theatre Company presents the musical based on the beloved animated film as part of the 30th season for Huntington’s long-running children’s theater.

WHERE: Shows will be presented live onstage at the Huntington High School auditorium at 1 Highlander Way.