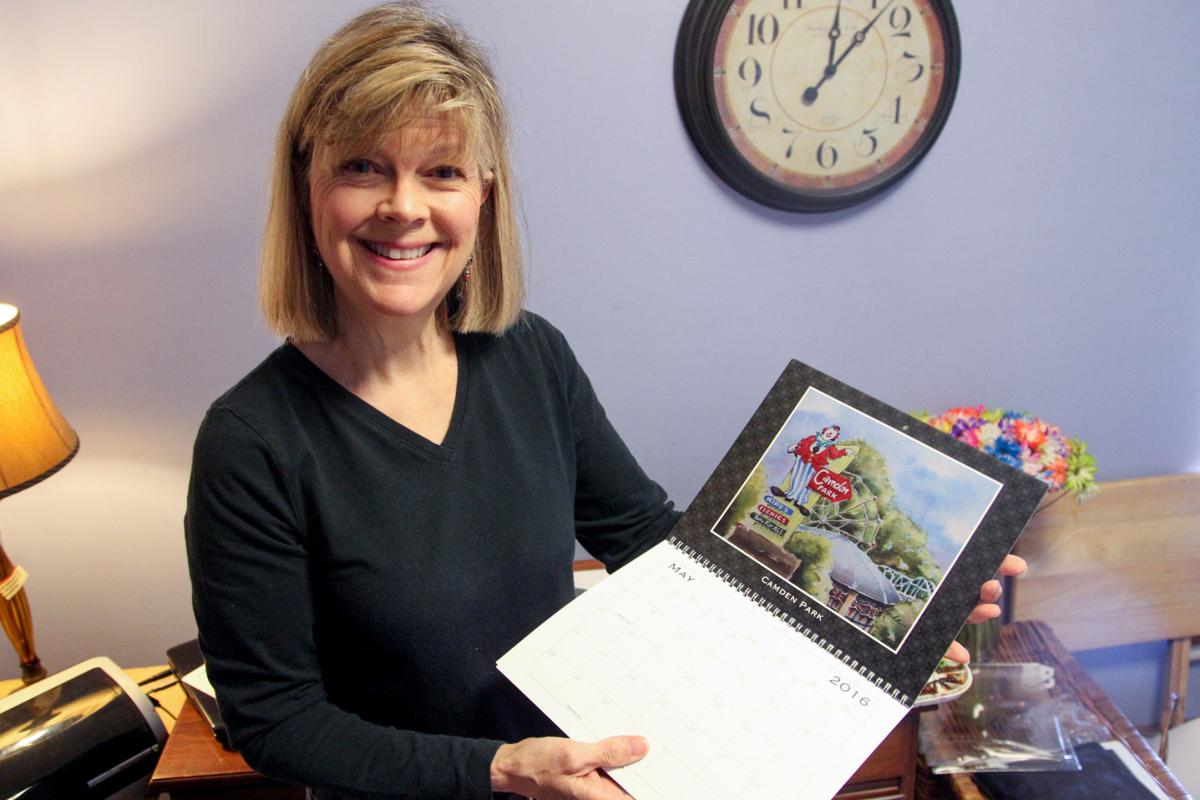 Anthony Davis/The Herald-Dispatch Local Painter Linda Childers looks at her poses for a photo with her calendar from her project 30/30 on Sunday, Jan. 3, 2016, at her home in Ona. Childers used her project in which she painted 30 Huntington landmarks, businesses and houses in 30 days, to compile a 2016 calendar that can be found in several places around Huntington including the Red Caboose, Old Main Emporium and the Village Roaster. 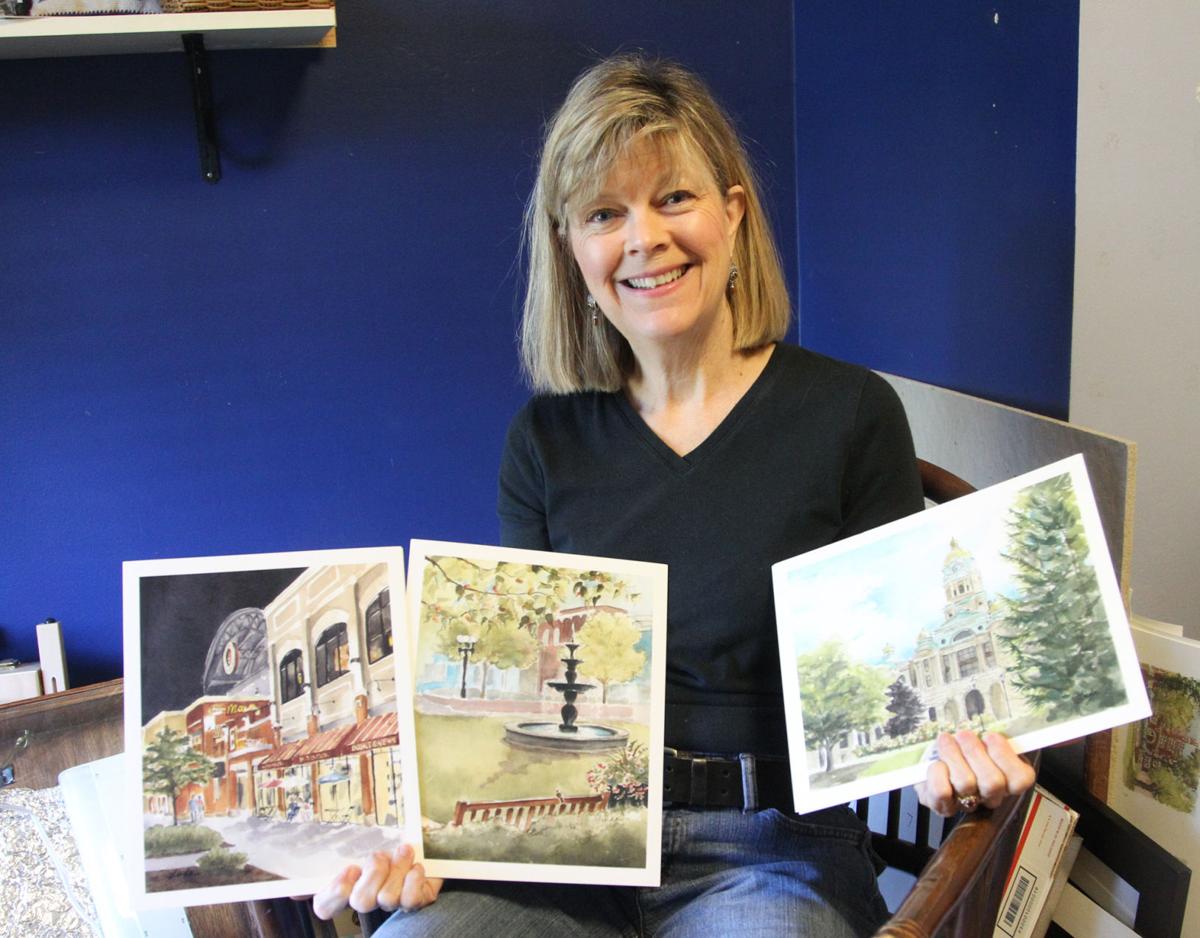 Anthony Davis/The Herald-Dispatch Local Painter Linda Childers poses with prints from her project 30/30 on Sunday, Jan. 3, 2016, at her home in Ona. Childers used her project, in which she painted 30 Huntington landmarks, businesses and houses in 30 days, to compile a 2016 calendar that can be found in several places around Huntington including the Red Caboose, Old Main Emporium and the Village Roaster.

Anthony Davis/The Herald-Dispatch Local Painter Linda Childers looks at her poses for a photo with her calendar from her project 30/30 on Sunday, Jan. 3, 2016, at her home in Ona. Childers used her project in which she painted 30 Huntington landmarks, businesses and houses in 30 days, to compile a 2016 calendar that can be found in several places around Huntington including the Red Caboose, Old Main Emporium and the Village Roaster.

Anthony Davis/The Herald-Dispatch Local Painter Linda Childers poses with prints from her project 30/30 on Sunday, Jan. 3, 2016, at her home in Ona. Childers used her project, in which she painted 30 Huntington landmarks, businesses and houses in 30 days, to compile a 2016 calendar that can be found in several places around Huntington including the Red Caboose, Old Main Emporium and the Village Roaster.

Although a new watercolor artist, Childers, a 58-year-old Ona resident pulled off quite a feat in late 2015, successfully creating 30 paintings in 30 days.

Originally, tackled as a project to simply hone her watercolor skills, the project ended up manifesting itself in an early December "30/30 Art Show" at The Cellar Door.

Some of those paintings are now featured in a locally flavored "30/30 2016 Calendar" that highlights a dozen of her favorite watercolors of Huntington landmarks from Ritter Park and Marshall's Memorial Fountain to Stewarts and Jim's Spaghetti.

The 2016 calendar is now on sale at the Red Caboose Gift Shop at Heritage Station, the Old Village Roaster (the coffee shop beside the historic Keith-Albee Performing Arts Center) and Heritage Farm Museum and Village.

Childers, who began painting in earnest over the past couple of years, said she got the idea from artist Leslie Saeta, who has encouraged artists from around the world to take the 30/30 challenge of painting 30 paintings in 30 days.

Childers said she tried to complete the task in 2014, but life got in the way.

This October, Childers decided to do it no matter what and to blog about it along the way to keep herself motivated to finish the project.

"I tried to do it last year, but a bunch of things got in my way," Childers said. "I did five paintings and then quit. This time, I decided to do it and make it happen. The main purpose was to practice, and that is what you have got to do if you really want to do something and get better at it, but there are so many life challenges that can get in the way from cooking dinner or taking the dog for a walk it is easy to get caught up in your routine and get away from your goal."

Childers put in 32 years teaching school, including a dozen at Nichols Elementary from where she retired about 3 1/2 years ago. She got the project started by taking photographs all over Huntington of some of her favorite places - from restaurants and architecturally interesting buildings to houses that piqued her interest like one in Mortimer Place, a quaint horseshoe-shaped street on the Southside.

"I picked four random residences, and they aren't the most phenomenal homes in Huntington, but I was inspired by them," Childers said. "The very first one was of a split level because one of my best friends growing up lived in one, and so I grew up with it. It was cute and right down the road from where we grew up, and it spoke to me of Huntington 1960s."

Along the way, Childers said she had some great experiences.

"I painted two churches including the historic United Methodist Church in Guyandotte that was built in the 1800s. When I got there, I figured I was not going to catch anyone there, but they were there and doing this incredible outreach program, and I found out they do so many things for the children of Guyandotte," said Childers, who donated the proceeds of that painting and its prints to the program.

She said she would post a photo of the finished painting at the end of each day and blog about it, whether or not she felt like it was her best work.

"Not all of them turned out like I wanted them to, but the beauty of having of posting every day was that it forced me to follow through with it, and every day I was excited to get up and paint," Childers said.

As Childers began bringing those photographs to life with watercolors and posting them to her website (www.artbylinda.com), she began getting feedback, and a friend said she should have an exhibition somewhere of all the paintings and suggested the new under 3rd Avenue restaurant and bar The Cellar Door.

Childers fell in love with the place and spent November prepping prints and framing the originals for a "30/30 Art Show" on Dec. 4.

Five friends and Childers' 14-year-old son helped put on the exhibit that saw about 100 visitors. Her husband, Rick, joined them via FaceTime from Japan to share the joy of the evening.

"I am struggling with words about how good the art show felt and every day in November getting the paintings ready, it was fabulous," Childers said. "I compared it to a wedding and how exciting it is planning, and then that day is such a blessed day, and all of these people who love you are were there and supportive of my art."

When it was suggested a calendar would be a great vehicle as well for the paintings, Childers put that together as well, doing some additional research on each spot to share some tidbits to accompany the paintings.

"I thought it was a perfect idea, especially for someone who loves Huntington or someone who has left and still loves it," Childers said. "I added a little information where I could. I love history and love to learn and love little trivia and facts about things. There are so many things buried in history like Camden Park, I didn't realize they created it as this little picnic spot so that riders on the railway would have a place to embark and get a little refreshment."

While the project is finished, Childers said the great feeling of accomplishment will continue to inspire her in the new year.

"I am 58, and I was not a painter at 18 and or 28 because I didn't have the confidence," Childers said. "It didn't take developing new skills, it didn't take winning the lottery, it just took believing I could do it. I want to say that not for my benefit, but for anyone who would like to do something and think they can't because of X, Y and Z. You have to believe you can, and I finally believed that I could do it."