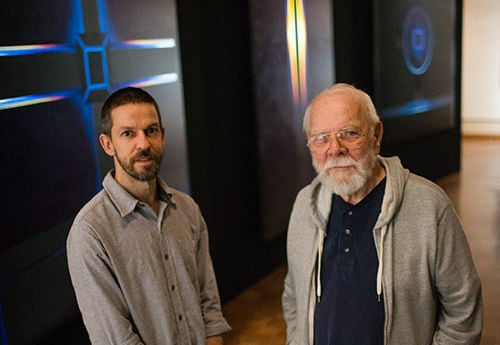 Sholten Singer/The Herald-Dispatch Robert Singleton, right, and Dan Morro are pictured Wednesday, July 26, 2017, in their exhibit "For the Joy of Light: Paintings by Robert Singleton & Soundscapes by Dan Morro" at the Huntington Museum of Art. The exhibit opens Saturday, July 29. 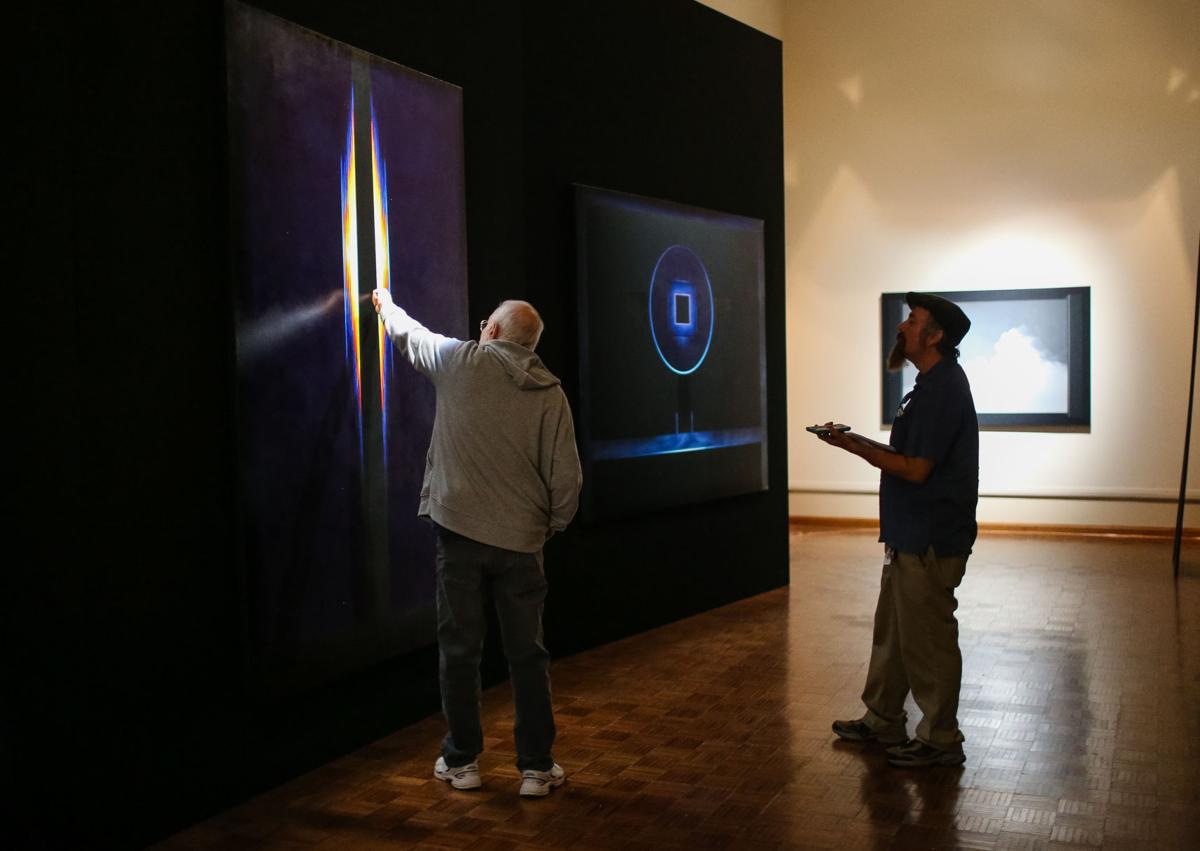 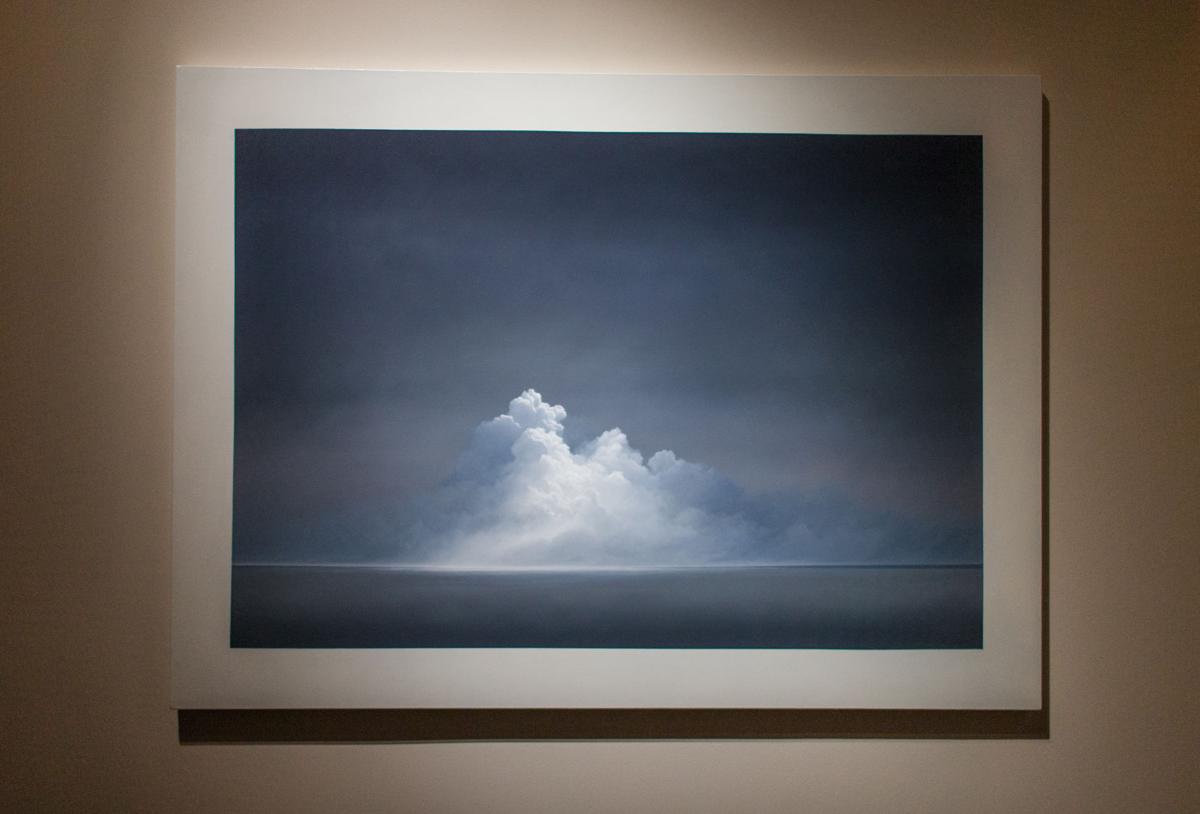 Sholten Singer/The Herald-Dispatch Robert Singleton's painting titled "Eminence" which is part of "For the Joy of Light: Paintings by Robert Singleton & Soundscapes by Dan Morro" is pictured Wednesday, July 26, 2017, at the Huntington Museum of Art. The exhibit opens Saturday, July 29.

Sholten Singer/The Herald-Dispatch Robert Singleton, right, and Dan Morro are pictured Wednesday, July 26, 2017, in their exhibit "For the Joy of Light: Paintings by Robert Singleton & Soundscapes by Dan Morro" at the Huntington Museum of Art. The exhibit opens Saturday, July 29.

Sholten Singer/The Herald-Dispatch Robert Singleton's painting titled "Eminence" which is part of "For the Joy of Light: Paintings by Robert Singleton & Soundscapes by Dan Morro" is pictured Wednesday, July 26, 2017, at the Huntington Museum of Art. The exhibit opens Saturday, July 29.

HUNTINGTON - Walk into the latest exhibit at the Huntington Museum of Art's Switzer Gallery and your head gets caught up in the clouds - two of Robert Singleton's ethereal oils painted and lit in a heavenly light.

Oh, "Eminence" and "Step Window" are fine, more than fine, by themselves.

But that is not all of the exhibit, they are only a foreshadowing of what lies around the corner.

While four of Singleton's smaller cloudscapes are seen in full museum light at each end of the gallery, the bulk of his new large-scale exhibit, "For the Joy of Light: Paintings by Robert Singleton and Soundscapes by Dan Morro," reveals itself after you walk into the middle of the gallery.

It is then, out of complete darkness, that light and music emerge and morph as your eyes and your mind slowly open together in a smooth, seamless fade into the reality of your surroundings.

"For the Joy of Light," a mind-blending and stunning nine-minute marriage of the large-scale oil paintings of Singleton shown in synchronization with the ambient music of German native EDM, jazz and rock composer and musician, Dan Morro, will be unveiled from 5 to 7 p.m. Saturday, July 29, during an opening reception for the multimedia exhibit that will be at the Museum of Art through Feb. 4, 2018.

With backdrops specifically built for this exhibit at the Huntington Museum of Art by John Farley, "For the Joy of Light" sets loose the wild imaginations of the nearly 80-year-old Singleton, the world-renowned painter who has called Hardy County, West Virginia, home for the past 40 years, and the musical exploration of Morro, the spry German composer whose career has been made consistently diving into musical waters unknown.

Singleton said he hopes the installation will be "a means of uncovering the core of our intuitive understanding and cumulative experience ingrained and transmitted through generations since the dawn of time [serving to] document his search for our shared universal awareness.

"I seek a means of involving all human beings, not as viewers, but as participants in the ageless impact of the creative emergence," said Singleton, who is celebrating his 80th year and 40th year in West Virginia, with a series of light and sound exhibitions and a retrospective book also called, "For the Joy of Light."

Geoffrey K. Fleming, Huntington Museum of Art executive director, said he is excited to be able to offer such a unique exhibit to the area.

"This is not typical for our region, so to be able to put something like this that combines paintings, sound, motion and light - that is amazing," Fleming said. "Immersive experiences like this are much more common in large museums now that have the ability to fund those kinds of things, so it was a little harder for us, but working with Robert and Dan made it so much easier."

Singleton, who left a celebrated position in the art world and ducked into exile in West Virginia back in the 1970s for a deliberate retreat into solitude, has long sought ways to weave together sounds of music with his paintings.

Years, ago in Florida, he staged what he said was a rudimentary version of "For the Joy of Light" by putting on a one-weekend-only exhibit that merged sound (although not specifically composed for his work) and light onto his paintings. But then he had to sit at the controls of a dimmer and sound board and be the proverbial "man behind the curtain," the wizard making the magical experience happen for the audience.

In some ways "Joy of Light" is a testament that technology has caught up with Singleton's rekindled zeal for his artistic visions. And that Singleton met someone else who shared his vision.

"A lot of this has to do with the advancement of technology and the fact that this is completely automated," Singleton said of "The Joy of Light," which automatically triggers the start to the nine-minute show when people enter the room. "The other big plus is that he (Dan Morro) is such an incredible composer, and for me, what a treat, because I had done this before with canned music, so one of the first things we talked about when we met was a collaboration of the paintings and that he would create original music."

The two first melded their respective arts in 2014 when they designed a less immersive exhibit set in the static-lit Grasshopper Gallery in Wardensville, West Virginia, the first exhibit it hosted. Morro created an ambient track to loop while patrons came in to see the Singleton's paintings.

"In the summer of 2012, after more than a 10-year hiatus from painting, I rediscovered the pure joy of the creative emergence," Singleton said.

The artist immersed himself in developing new work. He not only returned to his studio but also began an active exhibition schedule, including a 30-year retrospective at the Landes Art Center in Petersburg, West Virginia, in 2015 and a recent gallery showing in Lewisburg, West Virginia.

At their Singleton and Morro's first exhibit together, they were in awe of the power of the two mediums intertwined.

"It was an ambient sound that he created that immediately affected the people when they entered the gallery space, and it was just barely there, but when people came in you could see the difference in their behavior. They kind of stopped and looked, and I saw a woman with tears in her eyes. She backed away from a painting and felt that awesome sound," Singleton said.

Morro said when they saw people transformed they knew they had to explore the idea further, which led them to the current transcendental exhibition up now at the Huntington Museum of Art.

"When we both saw people kind of transformed, they came out of their busy lives, and they all of a sudden stopped and they also looked at art, and they stopped talking because there was this audible element to it," Morro said. "These pieces (at the Huntington Museum of Art) live through this dynamic of slowly fading the light in and slowly fading the light out, so how can we do this music? The same way - the music fades in, the light fades in, the music fades out, the light fades out, and it kind of creates a third dimension."

Armed now with DMX technology remote triggering surround sound audio from four speakers, and the slow creep of 4,700-Kelvin lighting (as powerful as daylight) from Times Square Lighting and Rob Riccardelli Sr., the duo, for the Huntington exhibition, has the music moving with the ethereal, cloudscape paintings showing themselves on one wall, and then, after a short delay, a series of geometric paintings rise from the darkness dynamically lit and bathed in sound.

"When do you perceive light with your eyes? Morro said. "And what happens when you look at color? How do we perceive things?"

Singleton said with the paint there is no trickery, no iridescent paints - just straight oils whose colors are getting turned on by the magic of light.

"When you put a light on the dimmer, when it first comes on it is a yellow-orange glow, then as you bring it all the way up fully up, it lights up to blue - that has to do with the spectrum of the light frequency, as this reveals itself," Singleton said. "As the light increases, the spectrum or the frequency of light expands to the blues and the violets, so when this is up full you have the full range, so if the color is there it will be illuminated."

While it may be sheer physics that reveals color, there is something more revealed as the atmospheric sights and sounds wash over you.

Carol Garrison, a museum docent for five years, said she was a little awestruck upon experiencing it.

"I don't know that I have all the words I want to say to describe it. It is so atmospheric and universal," Garrison said. "I do expect to see these things when I go to D.C., but this is just fabulous to have this here. It is gorgeous."

Head into the "Joy of Light"

WHAT: "For the Joy of Light: Paintings by Robert Singleton and Soundscapes by Dan Morro," a nine-minute multimedia exhibition featuring several large-scale paintings accompanied by dynamic lighting in a darkened environment, along with original music composed by German musician Dan Morro.

THE "JOY OF LIGHT" BOOK: "For the Joy of Light" is an 80-page book detailing the metamorphic change which took place in Singleton's work and also celebrating Singleton's 80th year and more than five decades of art.

ON THE WEB: For more information on events at the Huntington Museum of Art, visit www.hmoa.org or call 304-529-2701. HMA is fully accessible.