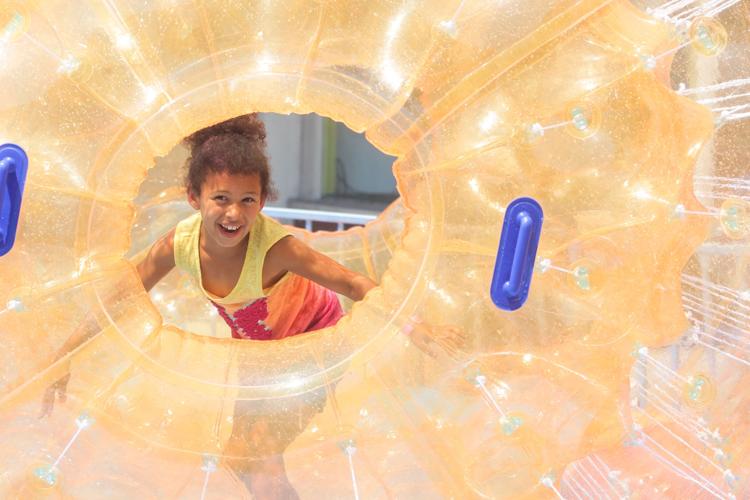 Ryan Fischer/The Herald-Dispatch Braleigh Whitfield, 7, of Lesage spends some time playing in the water rollers during the final day of Old Central City Days on Sunday, June 10, 2018, in Huntington. 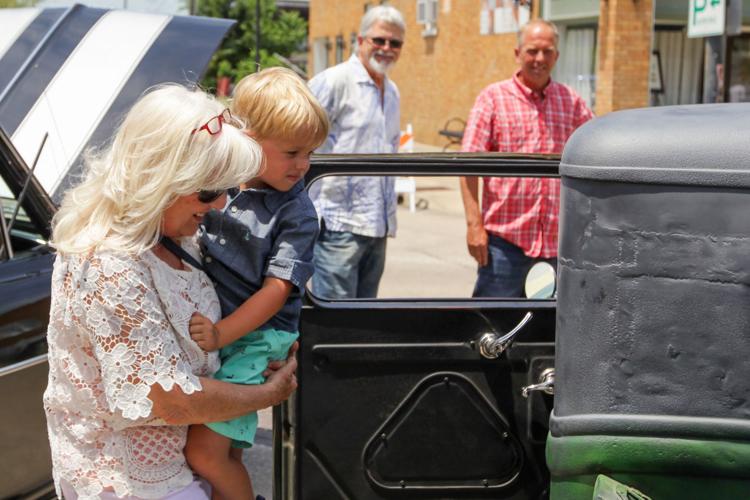 Ryan Fischer/The Herald-Dispatch Terry Roberts of Huntington and her grandson Tanner Whit, 4, take a look inside one of the old-time trucks during the final day of Old Central City Days on Sunday, June 10, 2018, in Huntington. 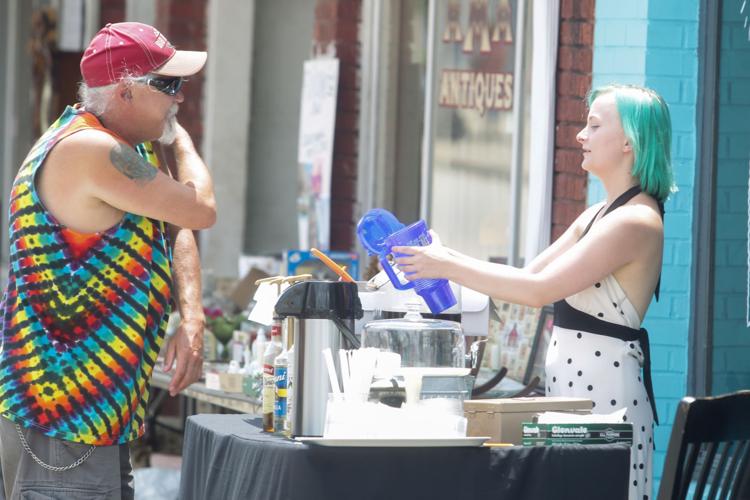 Ryan Fischer/The Herald-Dispatch Emily Kingery with Cicada Books sells coffee outside of the store during the final day of the 27th annual Old Central City Days on Sunday, June 10, 2018, in Huntington.

Ryan Fischer/The Herald-Dispatch Braleigh Whitfield, 7, of Lesage spends some time playing in the water rollers during the final day of Old Central City Days on Sunday, June 10, 2018, in Huntington.

Ryan Fischer/The Herald-Dispatch Terry Roberts of Huntington and her grandson Tanner Whit, 4, take a look inside one of the old-time trucks during the final day of Old Central City Days on Sunday, June 10, 2018, in Huntington.

Ryan Fischer/The Herald-Dispatch Emily Kingery with Cicada Books sells coffee outside of the store during the final day of the 27th annual Old Central City Days on Sunday, June 10, 2018, in Huntington.

And she couldn't think of a better place to start relaxing than back home on the West End.

Maynard, who now lives in Kenova, rolled back to her old stomping grounds of 14th Street West in style, with her husband, Elvie, and their vintage hot wheels — a blue 1937 Plymouth.

The Maynards' pristine Plymouth was part of the Tri-State Street Rods car show that was one of the many highlights of the 27th annual Old Central City Days, which wrapped up Sunday along 14th Street West with a hodge podge of antiques and vintage dealers, local arts and crafts, food, music and kids fun in what is known as "the antiques capital of West Virginia."

As a little girl, Maynard, who grew up on 7th Street West, said she used to run errands for her folks, such as shopping at Cyrus Hardware, which has been closed for years and is now Hattie and Nan's, one of the cornerstone antiques stores in Old Central City. Maynard said it did her heart good to come down and see so much going on in her old neighborhood.

"You know, I was born and raised here in the West End of Huntington, and so it makes me proud to see so many things going on and to see people getting together like they used to, out enjoying themselves and meeting new people," Maynard said of the festival. "I just got off work, and this is the best way to start my first day of vacation coming down and seeing all of the beautiful cars and the music and the food and things for the children."

That so many people - and the sun - was out on Sunday, a day that initially called for rain, was a beautiful thing to see, said organizer Denise Poole, who was watching the street fill with about two dozen cars at a car show put together by the Tri-State Street Rods.

"It's been really nice; we've had really good crowds. Friday was nice, and Saturday was even better," said Poole, who has a space at Village Antiques. "We had almost 60 vendors including our food and antiques vendors, like the old time photo booth which has been a lot of fun, and we have had wonderful music. Today, we are focusing on our classic car show. We thought it was going to rain, so we weren't sure if there was going to be two cars or any, so we are really happy the weather turned out so well. That has made the crowds real consistent, and there has been a real nice cross-section of people."

One of the festival focal points all weekend was the gazebo, where sound engineer Tyler Cooper kept the music flowing all weekend both at the festival during the day and then at his night jobs working with the music scene at Black Sheep Burrito and Brews Friday and V Club Saturday night.

Cooper, whose work day Saturday was 9 a.m. to 3 a.m., was back on the board Sunday, running sound for up-and-coming young country artist Brock Thompson and his new band, which burned through some hot covers of Hank Williams Jr., Tyler Childers and David Allan Coe, while blending in some tunes from his new EP he recorded at Suave Sounds Studio in Ashland.

"This is a big day for me because it's my first full band show," Thompson said. "I've been trying to form a band up since October, and have been failing pretty good at it, but we've gotten something together now, it just took a little while."

Just two doors down from the gazebo, folks were getting a first look and taste of Cicada Books and Coffee, which had a soft opening with iced coffee on the street, as well an open front part of the shop (which hopes to open fully by July 2).

The shop, which will be run by Dawn Norman and her daughter Katie, was getting some help this weekend from their long-time friend Peg Fisher, who has run PegLookatThat, a vintage clothing online shop, since 2009.

"There's been a lot of people through here, and they love the floors and the design of it," Fisher said. "She (Dawn) really wanted to make sure people could come in and take a peek at it, and people seem glad to know there is a bookstore in the community that will be a place that doesn't keep track of how long you have been sitting on the couch reading."

Poole said they feel like the festival has been successful to bring people down to the street to check out the blend of what is old and new and maybe even decide to be a part of the eclectic mix of businesses along the street.

"We're getting a lot of people who are really enjoying it and who have given us some good suggestions for next year," Poole said. "We want to keep growing it and to continue the awareness of both the history of this street and to encourage people to come down and to see the mainstays who have been here for a long time, and we have a couple new ones who are opening up like Cicada Books which is having a soft opening this weekend. There are some shops available, so we are hoping there are some entrepreneurs who are looking for a good space might want to look at this area and be a part of the street."

Poole said they have more music and festivities planned for Old Central City from a July Fourth concert to a fall festival that is in the planning stages.

Central City, which is home to about a dozen, freshly re-painted Quilt Blocks, will also host a Quilt Fair on Saturday, Oct. 27, with a quilt exhibition, a Quilt Trail Walking tour, fiber artist vendors and demos, a quilt auction, free youth quilt square painting and more.

The event that everyone was asking about is the Farmer's Market opening date. Luckily, the man with all the answers and info was just out back of The Wild Ramp.

"I have had people for two months asking when they can get some tomatoes and green beans," said Ken Bolen, market manager of the Cabell County Tailgate Farmer's Market, which will open Saturday, June 30, for the season. The Farmer's Market, which has 32 spaces available for area farmers, will run 7 a.m. until sold out every Tuesday, Thursday and Saturday until Oct. 27.

Bolen said word from the farmers is that it has been a good growing season, and so they expect a good early harvest.

"Even though this spring has been extremely strange, things are looking really good - and, who knows, we may even have some early tomatoes," Bolen said. "It really gets hopping in July. On that first day, I hope to have 15 to 20 vendors under here."

Bolen said events like Central City Days really helps him spread the word not only about the Farmer's Market but also to help promote regional tourism. In fact, this weekend he had handed out four boxes of the new West Virginia Travel Guides with Seneca Rocks on the cover.

Poole said the annual event goes a long way to help remind people of the good things in Huntington's West End, which has been a focal point of Huntington revitalization and drug enforcement and resources, thanks to the River to Rail initiative.

"We know Huntington has issues, and we know there is some of that here, but it is changing and it is getting better and we are working through it," Poole said, "and I think the more of this kind of thing that we do, the more events, the more activities, the more that people come down and love this area and come down and visit and help sustain the local businesses the better it is going to be."

Have you ever adopted a pet from the Huntington Cabell Wayne Animal Control Shelter?

Submitting this form below will send a message to your email with a link to change your password.

An email message containing instructions on how to reset your password has been sent to the e-mail address listed on your account.