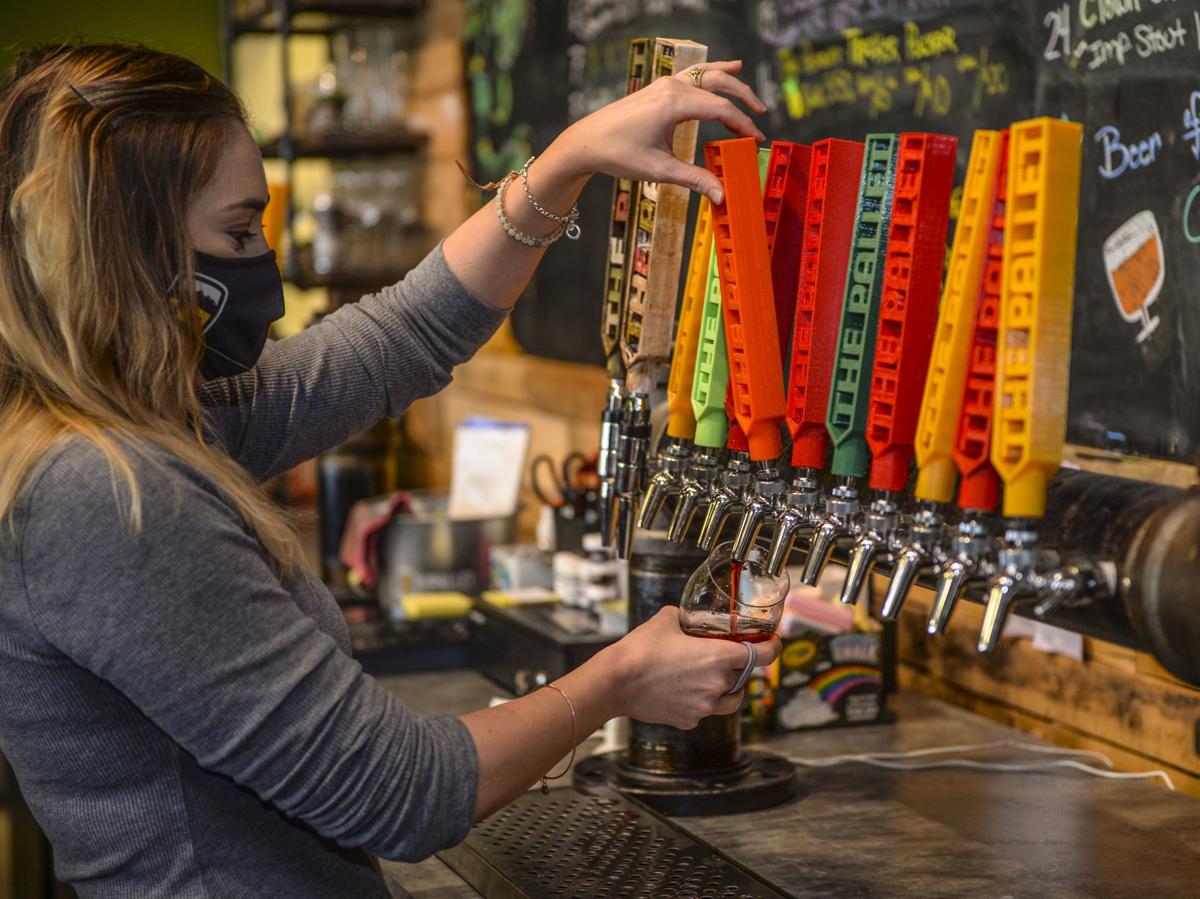 Bar manager Donovan Reed pours a glass at The Pallet Bar in Scott Depot. The beer-lover’s bar features a wide selection of craft beers, including an extensive collection of West Virginia beers. 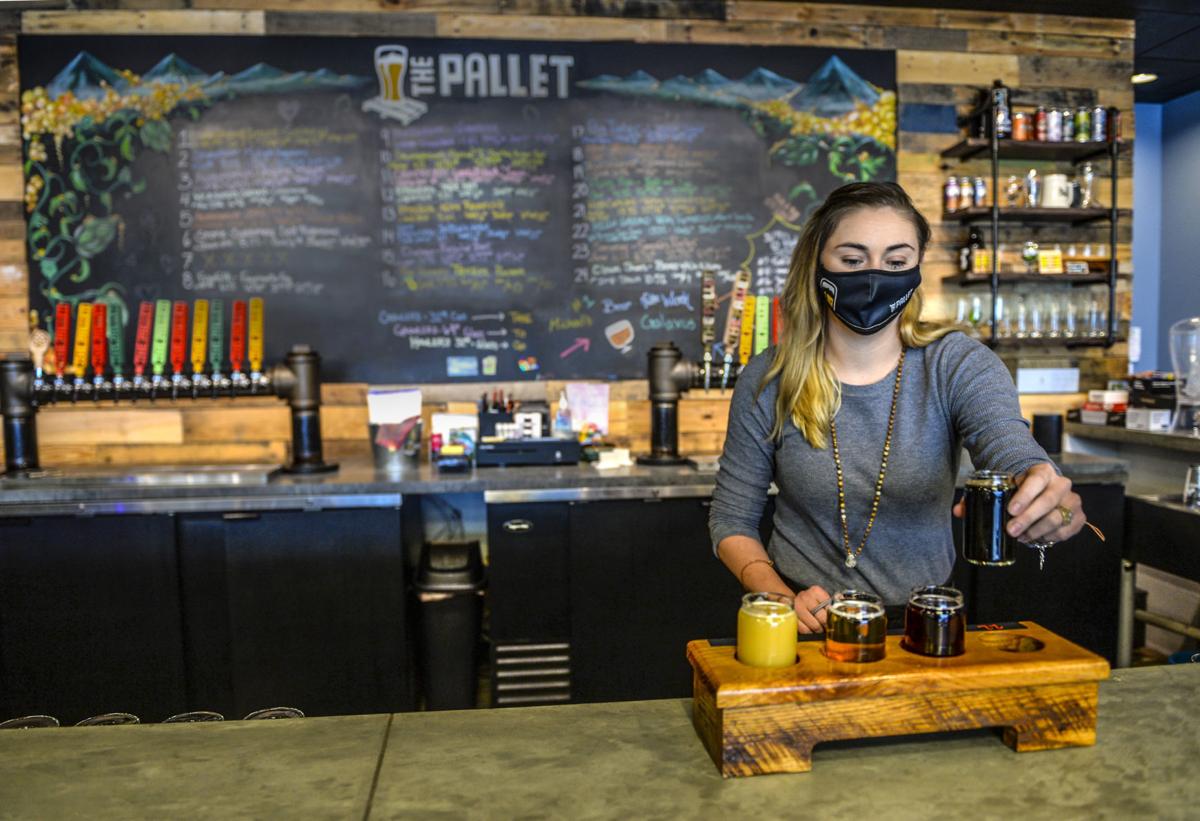 Bar manager Donovan Reed sets up a flight of craft beers at The Pallet Bar in Scott Depot. 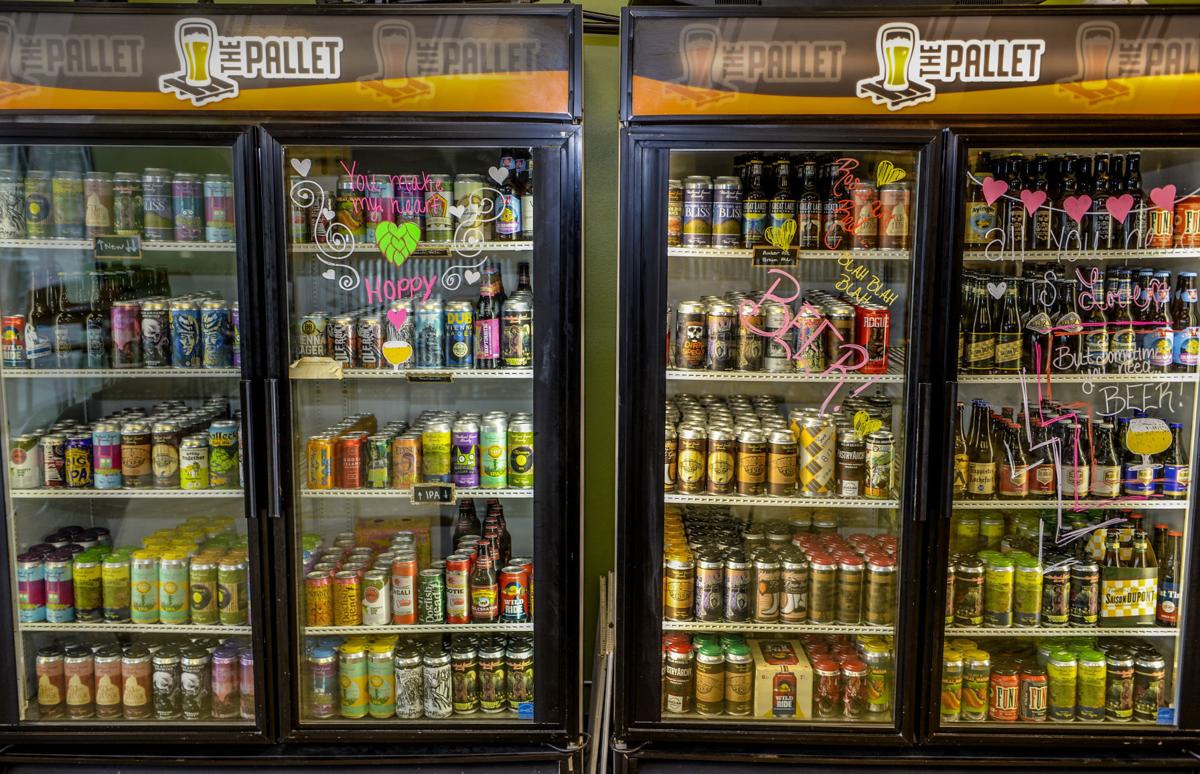 The Pallet Bar carries a little bit of everything from the craft beer world and has one of the largest selections of West Virginia brewed beers around.

Bar manager Donovan Reed pours a glass at The Pallet Bar in Scott Depot. The beer-lover’s bar features a wide selection of craft beers, including an extensive collection of West Virginia beers.

Bar manager Donovan Reed sets up a flight of craft beers at The Pallet Bar in Scott Depot.

The Pallet Bar carries a little bit of everything from the craft beer world and has one of the largest selections of West Virginia brewed beers around.

SCOTT DEPOT, W.Va. — Hobbies have a way of taking over.

The Pallet Bar in Scott Depot started off with three neighborhood friends just hanging out in Ben Burton’s garage.

Burton, a tax accountant for Mountaineer Gas; Shane Richardson, who owns Appalachian Offroad, a motorbike dealership; and Jamin Jones, a programmer at Perspecta, a data services and information technology company, would get together in their off-hours to unwind and share their favorite craft beers.

They hung out so much the trio turned the garage into a little bar, using the rough-hewn wood of discarded pallets, like the kind you often see stacked near the loading areas behind big box stores or piled up next to large trash bins.

Their aesthetic was simple, comfortable and casual.

“That was five years ago,” Burton said. “Then we outgrew the garage.”

They pooled resources and decided to open their own place. It really was just an expansion of what they were already doing. They wanted to be a watering hole for beer fans, a neighborhood bar for the discerning drinker and the locavore — people who weren’t necessarily into the usual bar scene.

West Virginia craft breweries have taken off over the past decade. The three friends wanted to share some of the best the state had to offer.

“There’s a lot of quality beer out there that’s local,” Burton said. “Weathered Ground in Beckley is rock-solid. The Peddler in Huntington is really up and coming.”

He said they like selling local beer, not just because it supports the local economy, but because local people put their hearts into what they do.

The Pallet Bar opened in Scott Depot during the summer of 2019 and brought Donovan Reed on as the bar manager to run the place.

Reed said she didn’t know all that much about craft beer to begin with.

“Everybody gets an education when you come to work here,” she said with a laugh.

Things went well. They quickly developed a following and a core of regulars who came by for an after-work drink.

“Our demographic leans toward 40- and 50-year-olds with some people in their 30s and 20s — really, the craft beer crowd,” he said.

Burton laughed and said their usual clientele insulated them from some of the trouble other bars and beer sellers run into with underage drinking.

There’s something in the bar for almost every taste, even people who say they don’t usually like beer.

“We have 24 rotating taps and over 100 different bottles and cans,” Burton said.

And yes, The Pallet Bar even has Bud Light.

They also keep a few sodas around. Some people can’t be reached.

But Burton is proud of their local beers.

Local beers are turning up in greater variety in grocery and convenience stores all the time, but The Pallet Bar gets beers from local breweries few other places have, including limited or seasonal releases that scarcely make it more than a few miles from the originating brewery’s taproom.

The stock stays fresh, and what they have on tap or in the cooler changes regularly because the types of beers craft beer drinkers drink follow the seasons. Lighter, more citrusy beers, including India Pale Ales (IPAs) and pilsners show up in the spring and summer, while the cooler months tend bring thicker, heavier beers like stouts and porters, which have more of a malt flavor often and a higher alcohol content.

Burton said local is important to The Pallet Bar. He and his partners are local guys, supporting local businesses and local organizations.

The Pallet Bar’s menu carries wings and appetizers, but they also bring in local food trucks, like Bite Mi, which sells Asian street food, or Joey’s Rockin’ Dogs and Tacos, which sells (what else?) tacos and hot dogs.

“That was something we saw up in Columbus,” Burton said. “Bars had food trucks on the weekend. It made the bar more of a place to hang out and just seemed like something good to bring here.”

They also give back.

Last year, they sponsored a Little League team in Winfield — The Pallet Brewers.

A year ago, the pandemic closed most businesses. Restaurants and bars, especially, took a hard hit.

Burton said they had to lay off most of their staff. He, his wife and his partners and their wives stepped in and ran the bar when they weren’t doing their other jobs. There were no crowds. Crowds weren’t allowed, but they got by on selling beer to-go.

They have a machine that seals the cans while you watch.

Even as restrictions loosened up, The Pallet Bar’s regulars didn’t come to hang out, like they had, but many of them still dropped in to pick up their favorite beers or get something new.

“A lot of people were working at home,” Burton said. “They’d come in Tuesday evening to pick up what they wanted.”

“And then they were back on Friday,” Reed said.

The two said COVID-19 might have encouraged a certain amount of day drinking.

As restrictions have eased and time has passed, things have improved. The regulars who had stopped coming are easing back.

“We’re still establishing this as a gathering spot,” Burton said.

“Nobody is a stranger here,” Reed said. “We’ll talk about beer with you all you want.”