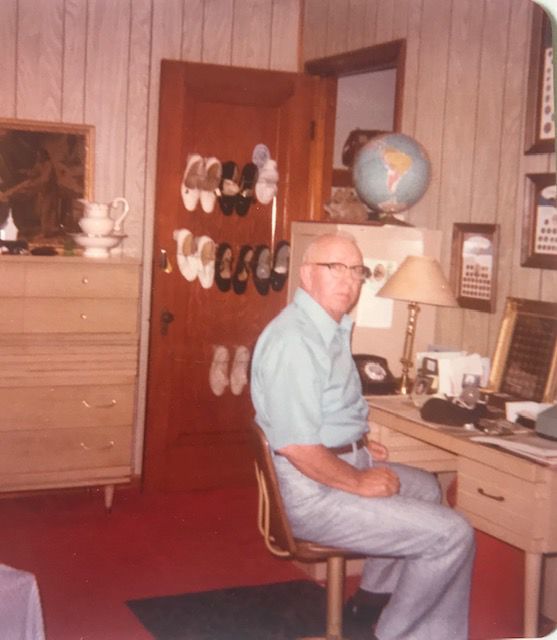 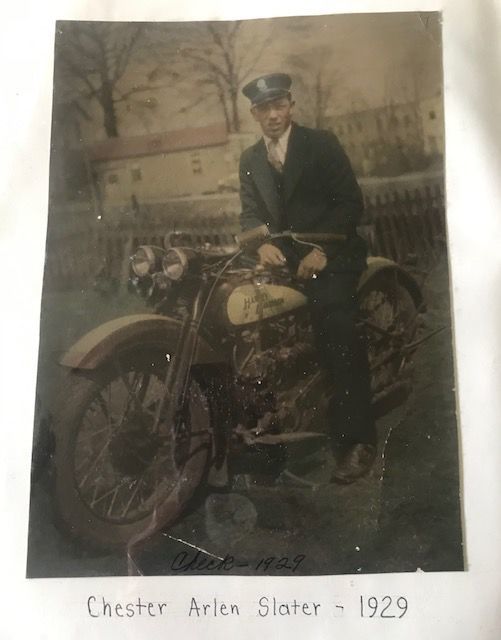 “We do not remember days, we remember moments.” — Jennifer Niven

“The thing I realize is, that it’s not what you take, it’s what you leave.” — Jennifer Niven

There he was, in my mind’s eye, intently gazing at me with those merriment-filled blue eyes, that, though dimmed by age, still had the ability to communicate to the person with whom he spoke, “No one but you matters at this moment.”

“Stethie,” he would say as he steadfastly clasped my hands, “Get your education. Go as far as you can. Don’t be like your dumb ol’ Papaw.”

Chester “Check” Arlen Slater was my maternal grandfather, but my siblings, my Kentucky cousins, and I called him, “Papaw,” while our “Texas cousins” called him “Poppie-Check.” On one hand, I was closest to “Grandmother,” his wife, in spite of our continued clashes — unfortunately, I was as strong-willed as she; however, as my mother talked to me in a recent conversation, I realized, it was Papaw who tended to inject me with doses of conviction and self-reliance as if giving me a vaccination of inner-strength against the challenges of the world.

To be clear, Papaw was a complicated man. As I understand it, based upon stories I recall my grandmother, my mom, and other various family members telling me, he possessed quite a bit of wanderlust and a roving eye when he was early married to Grandmother. In fact, he was known to leave my grandmother for months at a time to go “hobo-ing,” hopping from one train for another. Furthermore, I was told years later, he would lock himself upstairs for days at a time once he and my Grandmother settled into a home they had built after my mother was born.

Regrettably, I was never brave enough to ask him about any of those events. I sensed it would have embarrassed him. I do know that he often described in great detail how he never did well in school. He told tales of a teacher putting a “dunce” hat on him and putting him in the corner of the classroom.

Then, there were the stories of how the teacher would tie a string from her finger to his, “because I was her favorite pupil.” His educational career was short-lived, as he only made it to the fifth grade.

He loved to play football when the game was in its infancy and did not require much in the way of safety gear. I can imagine him as a strong, swift athlete, full of swagger. Papaw was even once described to me as a spoiled and indulged child. He owned one of the first motorcycles, if not the first, in the town of Raceland, Kentucky, and was known to perform “wheelies” and other daring feats on the town’s streets — sending bystanders swarming to the sidewalks.

His sister, Gladys, whom he dearly loved, and for whom he felt immense pride, was educated at Morehead State University at a time when women of Eastern Kentucky were rarely educated beyond the eighth grade. She became a teacher, married a veterinarian, and they lived in a town not far outside of Lexington, Kentucky.

Papaw often held up Great-Aunt Gladys to me as the gold standard for how I should aspire to live my life. She had a master’s degree, a career, and a successful marriage/family. Her husband was soft-spoken and kind, and Gladys possessed a quiet strength and grace that never failed to impress me during the few times I recall meeting her.

Somehow, I think Pappaw felt inwardly like failure due to his lack of education, especially when in comparison to that of his sister. However, as a lifelong educator whose university studies focused on the needs of special education, I recognize that Papaw most likely had a learning disability accompanied with what would now be identified as ADHD (attention deficit hyperactivity disorder). I further suspect he was both an auditory and kinesthetic (tactile) learner, and he probably best learned through some form of movement while listening. I am further inclined to think he may have battled depression that may have been tied to this same learning issue.

In spite of his struggles, Papaw had the ability to quip numerous adages, a few poems, random science facts, bits of trivia, geographic information, and oh-so-many stories. He “read” the daily local newspaper, National Geographic, American Heritage, Guideposts, and various other magazines. His bookshelves were lined with these periodicals as well as World Book Encyclopedia with its annual updates. Although truth be told, I suspect, as I reflect on his reading behavior, he mostly looked at the pictures, read the captions below, and focused on reading headlines, titles, and bold faced words. Nonetheless, his thirst for knowledge and understanding of the world, his desire to make real human connections, and his even greater eagerness to be the center of attention were all real sides of this complex man.

I share all of this to lend context to the following. All of these images, and more, hit me as Mom and I talked on that Saturday.

The ebb and flow of our conversation led me to share with her a beautiful quote from a young adult book my daughter had recommended to me: “The thing I realize is, that it’s not what you take, it’s what you leave.”

In my mind, I tried to scrape, claw, and dig my way to a memory of this, but I kept coming up empty.

At home, later that day, I looked it up. There it was, the very lesson Papaw was trying to convey to me all those years ago. He wanted me to be a “bridge builder” because that is how he saw his sister. He failed to recognize that he, himself, was a bridge builder to hundreds of members of the local Boy Scout troops he led, to the local church he loved, to the C & O railroad employees with whom he worked, to the hundreds of missionaries he either visited or hosted at his home, and to me, along with all of his eight other grandchildren who listened, learned, and loved this conflicted, but well-intended, man of heart.

And so, Dear Reader, I say to you, no matter what your career, position, job title, and so forth — none of that matters. Life is neither what you take from it, nor is it the money you make; rather, life is about the moments you create and the bridges you build for the next generation.

Be a bridge builder; I fervently pray that I am.

By Will Allen Dromgoole

An old man, going a lone a highway,

Came, at the evening cold and gray,

To a chasm vast and deep and wide.

The old man crossed in the twilight dim,

The sullen stream had no fear for him;

But he turned when safe on the other side

And built a bridge to span the tide.

“You are wasting your strength with building here;

Your journey will end with the ending day,

You never again will pass this way;

Why build this bridge at evening tide?”

“Good friend, in the path I have come,” he said,

“There followeth after me to-day,

A youth whose feet must pass this way.

This chasm that has been as naught to me

To that fair-haired youth may a pitfall be;

He, too, must cross in the twilight dim;

Good friend, I am building this bridge for him!”

Stephanie Hill is a freelance writer and a teacher at St. Joseph Catholic School in Huntington. She is also a lifelong resident of Lawrence County. She can be reached at hill992@zoominternet.net. Or you can check out her website, stephsimply.com.