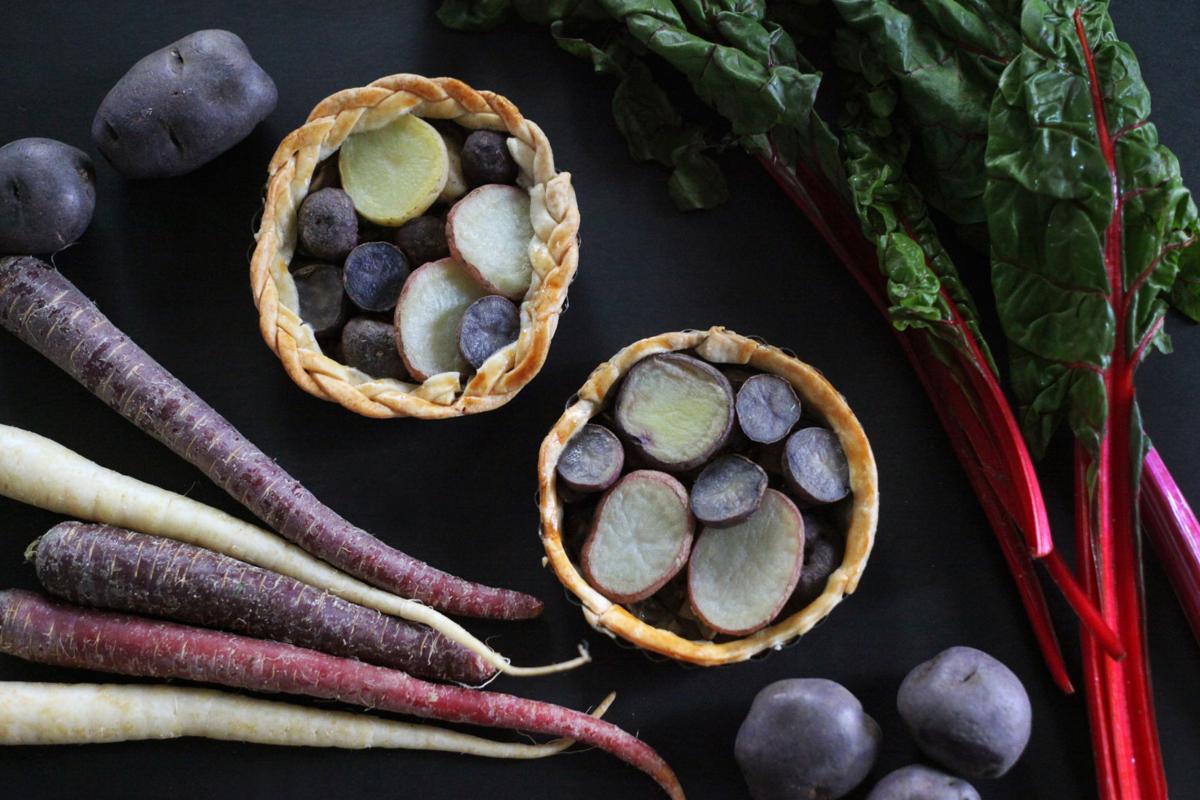 Hanna Nakano/For The Herald-Dispatch From heirloom carrots, to Japanese purple sweet potatoes, purple bell pepper to asparagus, cauliflower and corn, purple varieties of your favorite vegetables are popping up everywhere from five-star restaurants to Instagram feeds to, yes, your local grocery store. The brightly colored produce can be one way to up the visual ante on your Thanksgiving feast. 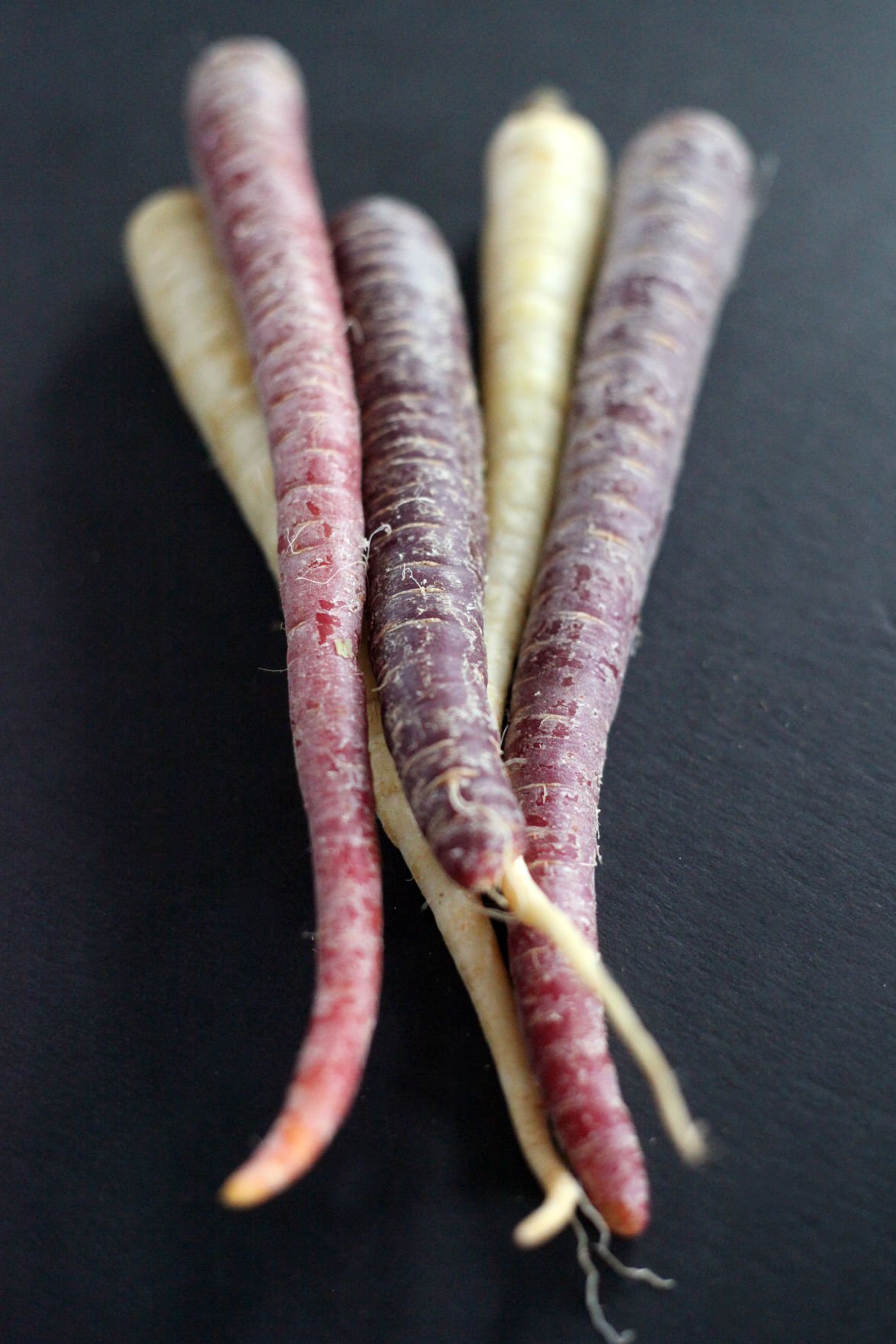 Hanna Nakano/For The Herald-Dispatch With their bold colors but same flavors, purple varieties of traditional Thanksgiving vegetables like carrots and sweet potatoes can be substituted into your favorite recipes with no other changes needed. 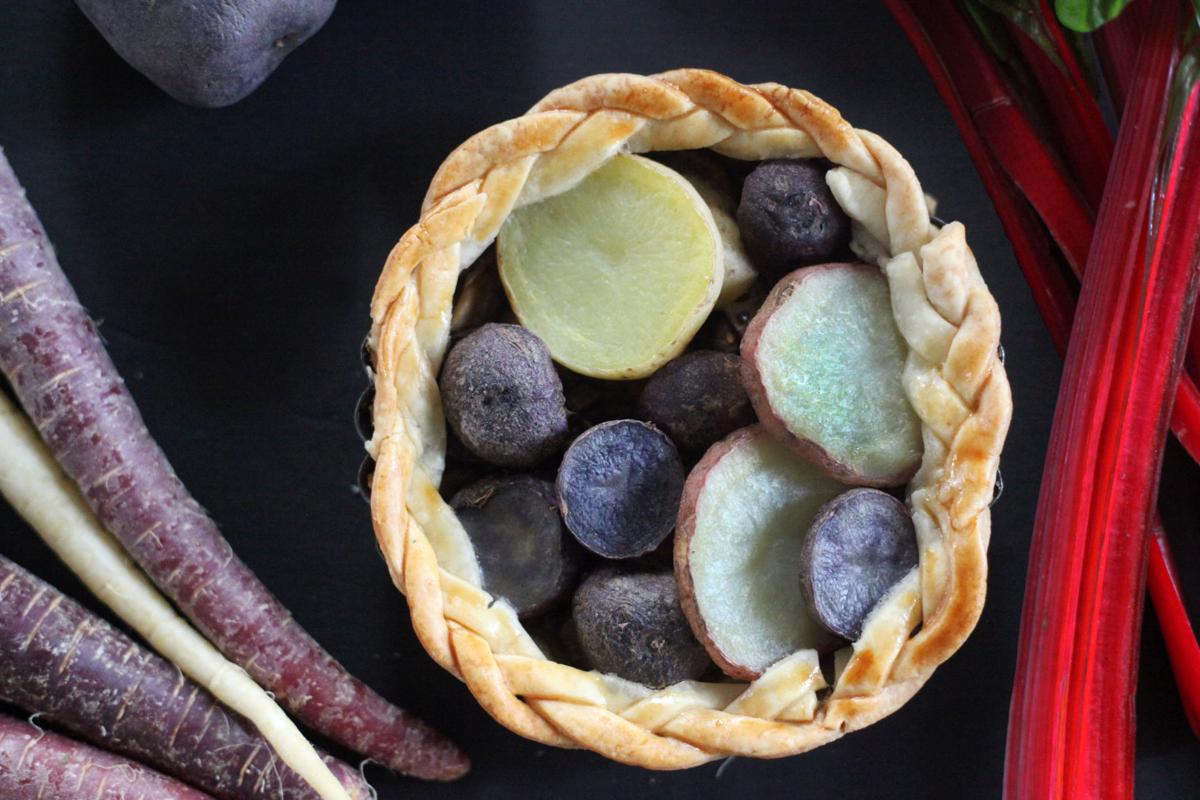 Hanna Nakano/For The Herald-Dispatch A savory blend of mushrooms and purple potatoes is a fun, festive Thanksgiving side dish or light lunch before the big meal.

Hanna Nakano/For The Herald-Dispatch From heirloom carrots, to Japanese purple sweet potatoes, purple bell pepper to asparagus, cauliflower and corn, purple varieties of your favorite vegetables are popping up everywhere from five-star restaurants to Instagram feeds to, yes, your local grocery store. The brightly colored produce can be one way to up the visual ante on your Thanksgiving feast.

Hanna Nakano/For The Herald-Dispatch With their bold colors but same flavors, purple varieties of traditional Thanksgiving vegetables like carrots and sweet potatoes can be substituted into your favorite recipes with no other changes needed.

Hanna Nakano/For The Herald-Dispatch A savory blend of mushrooms and purple potatoes is a fun, festive Thanksgiving side dish or light lunch before the big meal.

We wait all year for it, spend days preparing for it and rise before the sun to start cooking. Thanksgiving dinner hits all the marks in terms of flavor, but when it comes to aesthetics, the holiday fare is more than a little monochromatic. The turkey, the stuffing, the sweet potatoes - brown, brown, brown.

But it doesn't have to be.

Striking in a sea of greens on the produce wall, these eye-catching purple veggies pack a one-two punch. They're also boasted as major health boosters.

Naturally dark purple foods contain more antioxidants than their ordinary colored counterparts. According to the Mayo Clinic, resveratrol is a key antioxidant found in these darker foods, and it can help reduce the risk of blood clots, prevent damage to blood vessels and help maintain a healthy blood pressure. And just like cranberries and blackberries, these purple veggies also contain the same plant pigments that are known to fight stomach ulcers and urinary tract infections.

But let's be honest - we're grabbing them because they add intrigue to our tablescape and make a fun Thanksgiving conversation starter.

"It's a satisfaction thing," Chef Todd Cox said. "Satiation comes from not only eating the food, but appreciating it. One of the ways we apreciate it is visual."

Cox is a culinary instructor at Mountwest Community and Technical College. At school, he's teaching dozens of future chefs how about prep mirepoix and turn mushrooms; at home, he's planning a friendsgiving with 30 of his closest. Cooking, as one might imagine, is his love language.

"It's the biggest display of gratitude, or love, you can show," Cox said.

Cox's signature Thanksgiving style is to put a twist on tradition. Purple produce is one way that can be done.

Purple sweet potato pie, a creamy beet salad, maybe a side of forbidden rice. They're the flavors you'd expect, but with a brand new look.

"I think it's kind of fun because it's the same vegetables you grew up eating, it's just a different color. It looks beautiful on plates as well," Chef Marty Emerson said.

Emerson is the chef at Huntington's Kitchen, where he teaches recreational cooking classes. Visual stimulation, he said, is almost as important as how good the food tastes. You eat with your eyes first, after all.

"You want that color and variation," Emerson said. "Some cauliflower dishes just look blah on a plate, but if you make it purple or orange it gives it some color. It gives an art aspect to the dish."

Though it may sound trivial, the fact that purple veggies are becoming so noteworthy is news in itself. We're living in a time where, despite availability, more than 90 percent of people in the United States say they don't eat enough vegetables.

U.S. dietary guidelines say people should aim for between five and 13 servings of vegetables a day. That's about 2.5 to 6.5 cups - it varies based on your weight. Across the nation, most people are not hitting the mark. In West Virginia specifically, about 93 percent of people surveyed say they are not getting enough veggies in their diet, according to research from the Centers for Disease Control. Though the sample size was small, just over 4,600 respondents, the results are telling.

Americans could stand to have a few more veggies on their plates, purple or not. The obesity rate in the U.S. for men stands at 35 percent, 40 percent for women. If purple Brussels sprouts or okra encourages consumers to add a few extra veggies in their cart, it might be prudent for more grocery stores to stock these colorful items.

The best part about these almost exotic foods, Cox said, is you don't have to learn to cook something new. With purple produce, you can use your favorite tried-and-true techniques and achieve a brand new result.

"It extends the color palate. It brightens things up. It's something new," he said. "I would encourage people to try them, just to see what they're all about. Most of the time the flavors are the same. It's just coming through with our agriculture changes and things are more readily available. You're just adding a new crayon to your box."

Comments may be sent to Hanna Nakano at hannanakano1@gmail.com.

Add some color to your Thanksgiving tablescape with this savory purple potato and mushroom tart. Perfect as a side for dinner or paired with a salad for Thanksgiving lunch.

Heat oven to 350. Simmer potatoes in water for 10 minutes or until tender; drain.

Melt butter, sweat shallots with a pinch of salt until aromatic. Add mushrooms and 1/2 tsp. thyme; sautee for 10 minutes. Season to taste with salt and pepper.

Roll pie dough into 9" tart pan, or personal-size tart pans (as pictured). Fill with mushrooms, sprinkle on cheese and top with potatoes, overlapping slightly. Finish with remaining thyme and a sprinkle of salt.

Place tart on baking sheet and cook for 40 minutes, or until crust is golden brown.