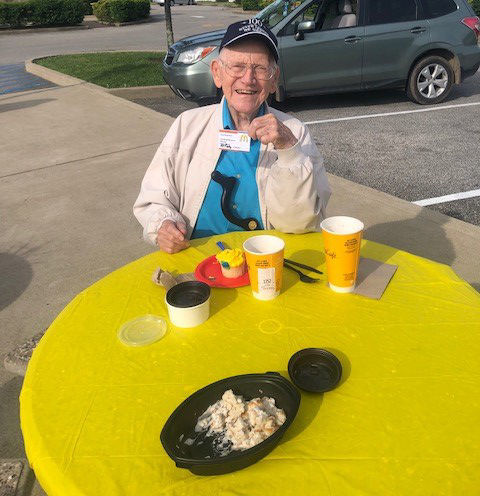 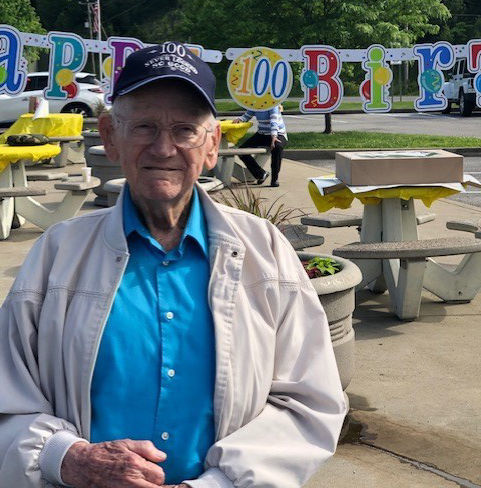 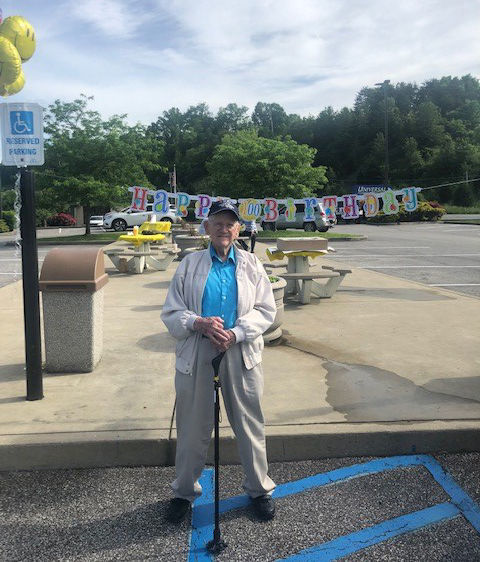 BARBOURSVILLE — World War II veteran and retired teacher Lloyd Richmond has been a loyal McDonald’s customer for decades, so for his 100th birthday, the Huntington Mall McDonald’s hosted a surprise party to celebrate the milestone occasion.

“We never knew he was as old as he is until his daughter told us,” said Al Rigsby, McDonald’s area supervisor. “That’s when the staff, his daughter and other customers planned a party for him.”

Richmond has been a regular visitor to the restaurant for the last several years after relocating to the area to live with his daughter, Tammy Smith, in Barboursville.

Smith approached the restaurant’s manager about having a surprise party for her father’s milestone birthday, which is celebrated on May 27.

Rigsby said with social distancing guidelines in mind, restaurant staff worked with Richmond’s daughter to plan an event worthy of the occasion. They filled the restaurant’s outdoor patio area with balloons, signs and cupcakes.

Rigsby said friends, employees, and even complete strangers stopped by to partake in the fun.

“All Lloyd’s breakfast club friends and the restaurant employees made it happen,” Rigsby said. “He was so happy.”

“It was really fun,” said Smith, who added that the McDonald’s employees at the Huntington Mall location have become like family to her father and herself.

“It wasn’t elaborate at all and it didn’t need to be,” she said. “There was lots of love and that’s what made it so special.”

Richmond’s typical breakfast order is biscuits and gravy and that’s what he had for his birthday.

“Lloyd has seen so much in 100 years and his stories are well worth having breakfast with him,” he said. “He is an inspiration to everyone, both young and old.”

Richmond was born in a tent along the Elk River near Charleston in 1920. His father was an oil rigger. He and his mother, father and two brothers lived there for several months until they could relocate to the northern panhandle of West Virginia joining other family members in Silver Hill, West Virginia, in Wetzel County.

Richmond was small for his age, but was an integral part of running the family farm. His duties as a young boy included milking the cows, feeding the animals, cutting firewood and carrying water to the house from the creek.

“He assisted the local postal carrier in transporting the mail to the area by driving the delivery truck,” his daughter said. “This involved picking up passengers along the way.”

When strength returned, he completed high school in time to be drafted to World War II.

As part of the Army Air Corps’ 336th Air Service Squadron, Cpl. Richmond departed on a captured German ship, the U.S.S. Pennant, for the South Pacific.

Richmond experienced war and homesickness while in Australia, New Guinea, Wakde Island, Morotai in the Dutch East Indies as well as the Philippines. After 42 months, he was able to return to the United States.

“Unfortunately, he did not return home to his beloved Silver Hill,” his daughter said. “The family farm had been sold because he and his brothers had all been called to serve their country. There was no one left to run the farm but his mother.”

Richmond found himself in an unfamiliar city of Huntington, according to his daughter.

“His brother, Herschel, who had been wounded on Iwo Jima, had come to the area as a minister and had secured a home for their mother,” she said.

Richmond found employment at Heiner’s bakery until reading a local newspaper notifying soldiers of the availability of the G.I. Bill, so he decided to go to college.

Attending Marshall College, Richmond earned an A.B. in History and Music and a M.A. in History. Upon graduation, he began his teaching career, which he maintained until retirement in 1986, Richmond continued working for 10 more years with Coal Grove and Ironton school districts by repairing audio-visual equipment.

While a music teacher at Coal Grove, he was asked to compose a marching song for the Ohio State Highway Patrol and the Dawson-Bryant High School mixed chorus performed the song at the academy’s graduation on June 26, 1968.

Their first child, Paula Faye was born the next year and daughter, Tammy, was born several years later. They attended Zoar Baptist Church in Coal Grove and Richmond began a music program at the church.

Richmond has written many gospel songs performed at the church, his daughter said.

“He is also a published author of stories from his childhood and also writes children’s stories,” she said.

His daughter Tammy has continued the four-generation family tradition as the art teacher at Dawson-Bryant Elementary School, and resides in Barboursville with her husband, Dennis.

Richmond’s granddaughter, Kelsey, and her husband, Tyler Hatfield, have one daughter, Hailey Grace, who Richmond says is his “pride and joy.”

Send us your 100th birthday celebrations

The Herald-Dispatch publishes photos and announcements of 100th birthday celebrations. Photos and information are published as space allows after the date of the 100th birthday.

We are happy to include the following information: birthplace, hometown, current residence, family, celebration, education, occupations, special achievements (if any), civic involvement, hobbies, childhood memory and secrets to longevity.