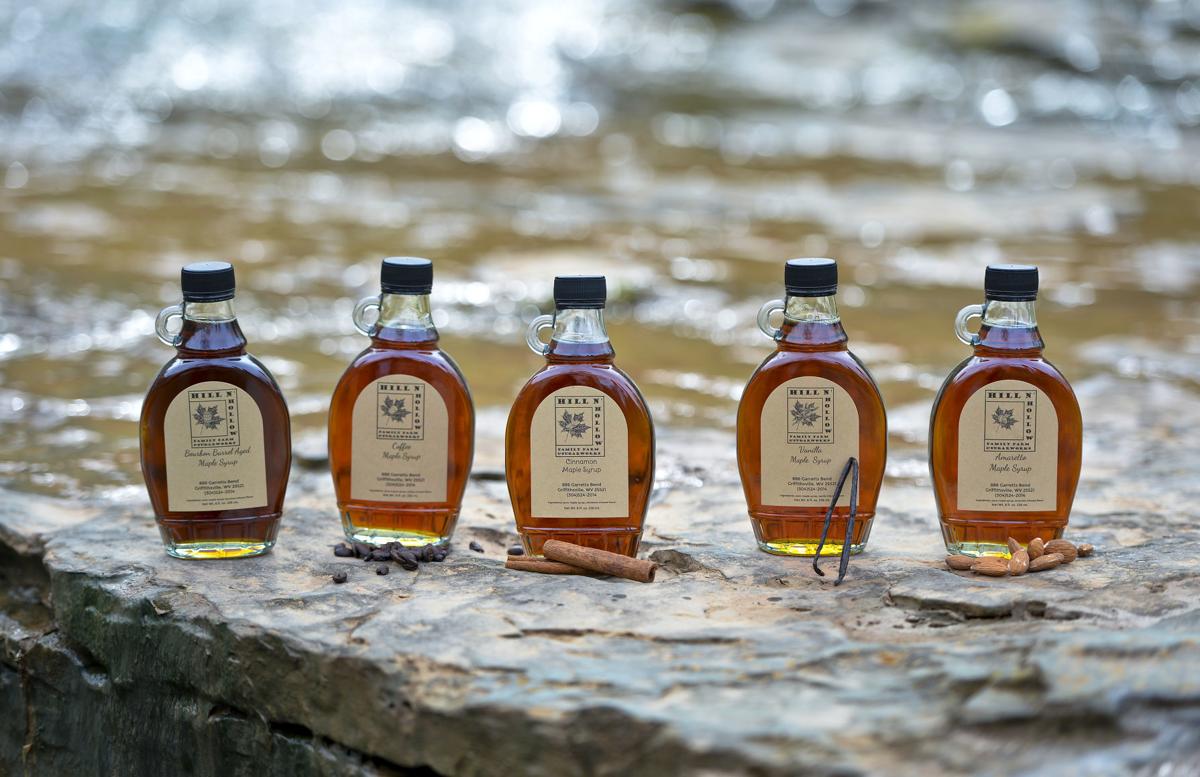 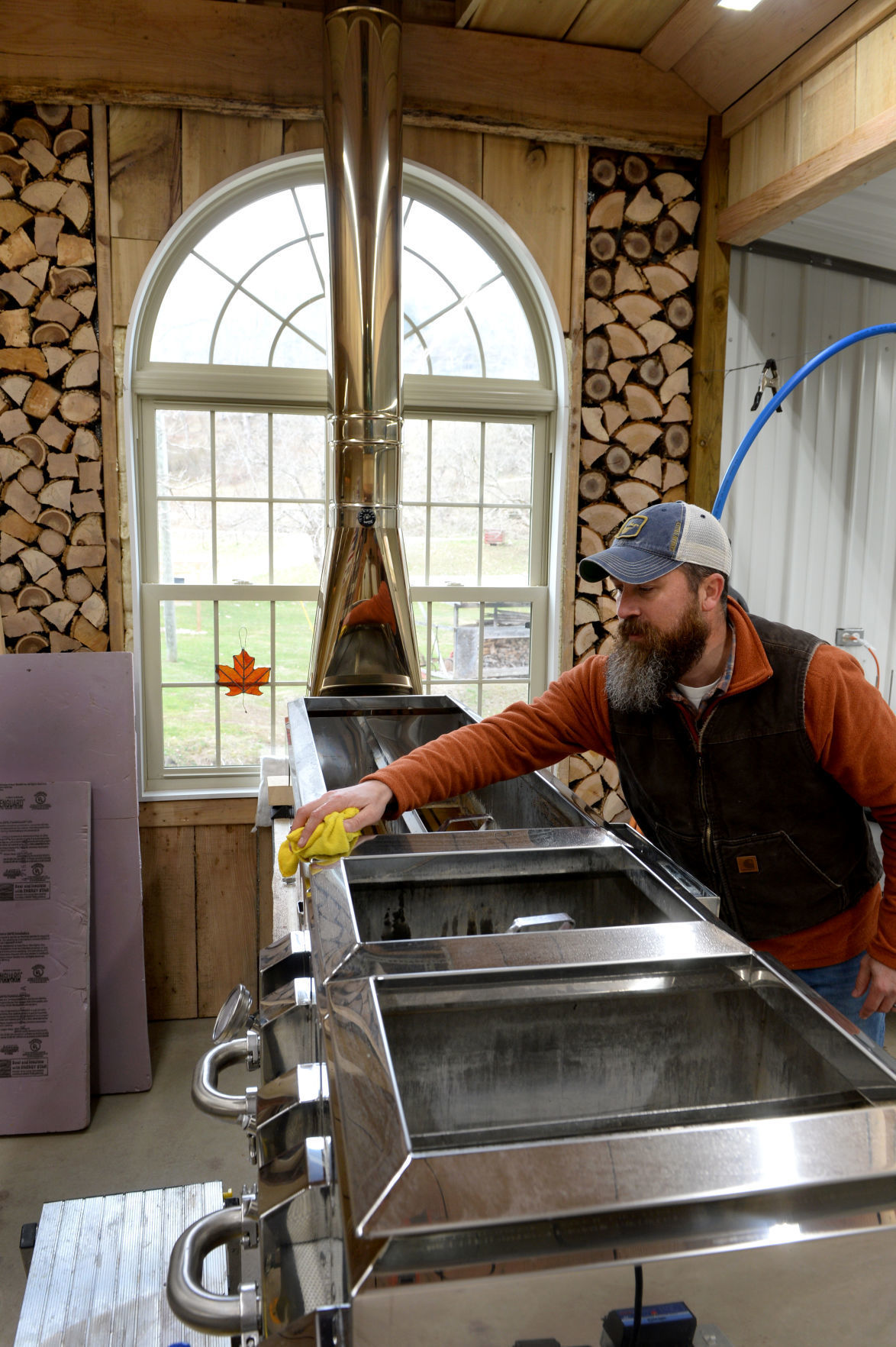 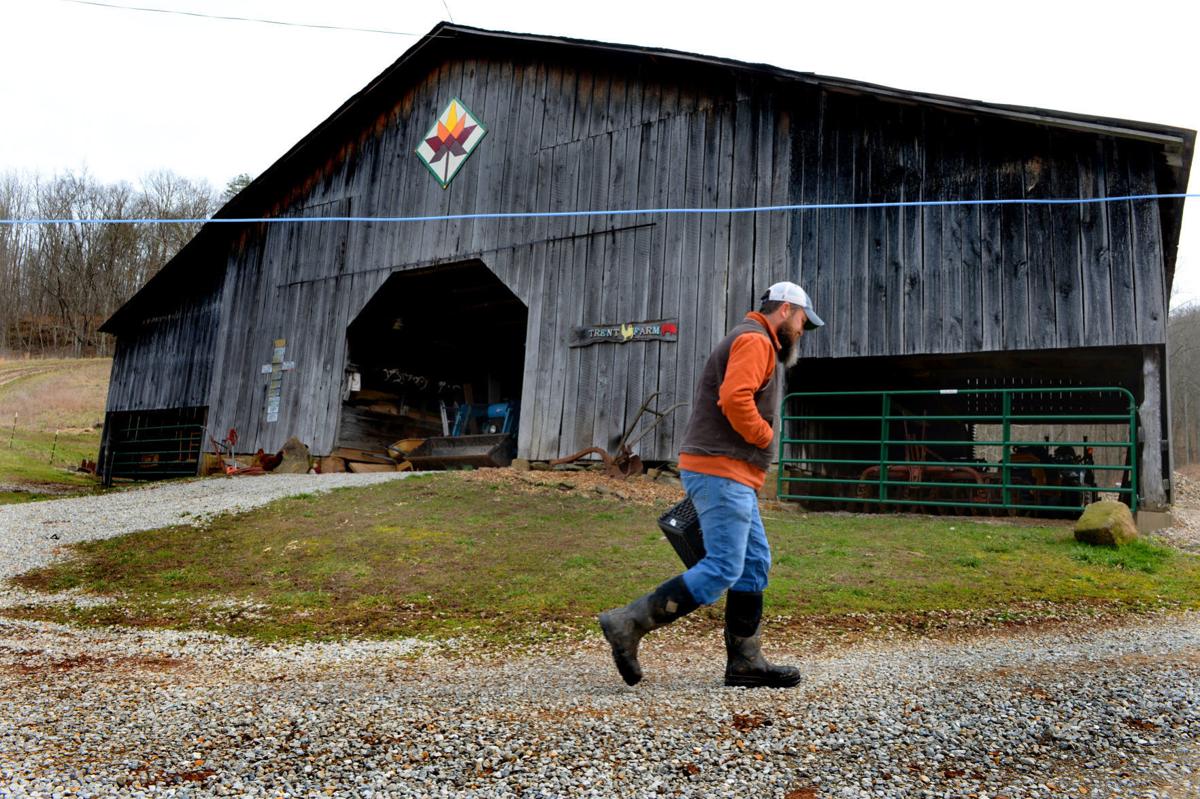 Chad Trent walks past the barn on his property at Hill n’ Hollow Family Farm and Sugarworks, in Griffithsville. The barn, which was once used to process tobacco, is where Trent first began experimenting with making flavor-infused maple syrup.

Chad Trent walks past the barn on his property at Hill n’ Hollow Family Farm and Sugarworks, in Griffithsville. The barn, which was once used to process tobacco, is where Trent first began experimenting with making flavor-infused maple syrup.

GRIFFITHSVILLE — There may not be gold in the hills and hollers of West Virginia, but there is money to be made through the pale amber sap that flows from the maple trees that cover the mountains and valleys here.

“The average within the United States is 50 bucks a gallon,” he added.

It’s even more if you infuse the syrup with crowd-pleasing flavors, which Trent tested last year and began offering for sale to the public for the first time this year.

Adding flavors can be lucrative, but it’s controversial in the maple syrup world.

“Some people are purists. They kinda go against adding anything to it because it’s no longer pure maple syrup,” he said.

But people who love it really love it. In the end, Trent decided to let his customers decide for themselves.

“I’ve witnessed it several times going to the Highland County Maple Festival over in Virginia,” he said.

Infused flavors, he found, were more popular than anything else.

He began experimenting two years ago in an old, decrepit building on the property he bought from the estate of “Miss Irma” Wade.

“It was an old stripping barn. And so they stripped tobacco. And we literally used Miss Irma’s old canning stove to boil it on. It took like 15 hours to make maybe two quarts. I mean, it was a slow process,” Trent said.

He upgraded the facility and test marketed infused syrups during last year’s West Virginia Maple Days. Crowds loved them — including the ginger, which he hasn’t advertised much.

“We buy ginger root. We scar it so the oils get out, and then we let it just basically soak,” he said.

The syrup absorbs the flavor, and the root is siphoned out before it’s sold.

It’s a similar process for vanilla bean and cinnamon. Allowing the syrup to sit in a freshly drained bourbon barrel brings about the bourbon-barrel infused syrup which has a strong bourbon taste but is unlikely to have any actual alcohol.

Amaretto comes from almonds; and, for coffee, “We partner with Coal River Coffee Company in St. Albans,” he said.

The flavors are added after the trees have been tapped — after the sap has flowed down to collection tanks, and after it’s been boiled to remove most of the water.

As a veteran, the state Department of Agriculture provided maple training for Trent. By comparison to Vermont and Canada, this operation — and others like it in West Virginia — are smaller than small. Trent argues there’s something to be said for knowing where your products are coming from.

“It’s the value component, the fact that you come and see where it’s made, you can meet me, you can talk to me. I’ll take you up there and let you hug the tree if you want,” he said.

Popular syrups on the market might be a lot cheaper but have high fructose corn syrup.

Other syrups come from places that buy in bulk.

“Canada is the world’s largest producer. They actually have a reserve, kinda like OPEC. So every producer sells to the government. They put it in bulk barrels, big stainless barrels, and then they kind of regulate the price that way,” Trent said.

Consumers don’t have any way of knowing where the product came from, what might have been added in or what’s gone into the ground during the process.

“We’re not organic certified. But I guarantee you, as long as I own the farm, that sugar bush area where our trees are at, it’s never going to have anything on it. We have no reason to get there and spray things,” Trent said.

Trent has 143 acres with an abundance of red and sugar maples. He has placed 500 spiles — or taps — on somewhere in the neighborhood of 175 trees.

WHERE: Maple producers across the state, including Hill n’ Hollow Family Farm and Sugarworks, located on Garretts Bend Rd. in Griffithsville.

COST: Some locations will offer samples and tours at no cost. Some will have products available for sale.

INFO: For a complete listing of all participating venues, visit the West Virginia Maple Syrup Producers Association online at https://wvmspa.org/, on Facebook, or send an email to wvmaplesyrupproducers@gmail.com.

Has your employment been affected by the COVID-19 pandemic?