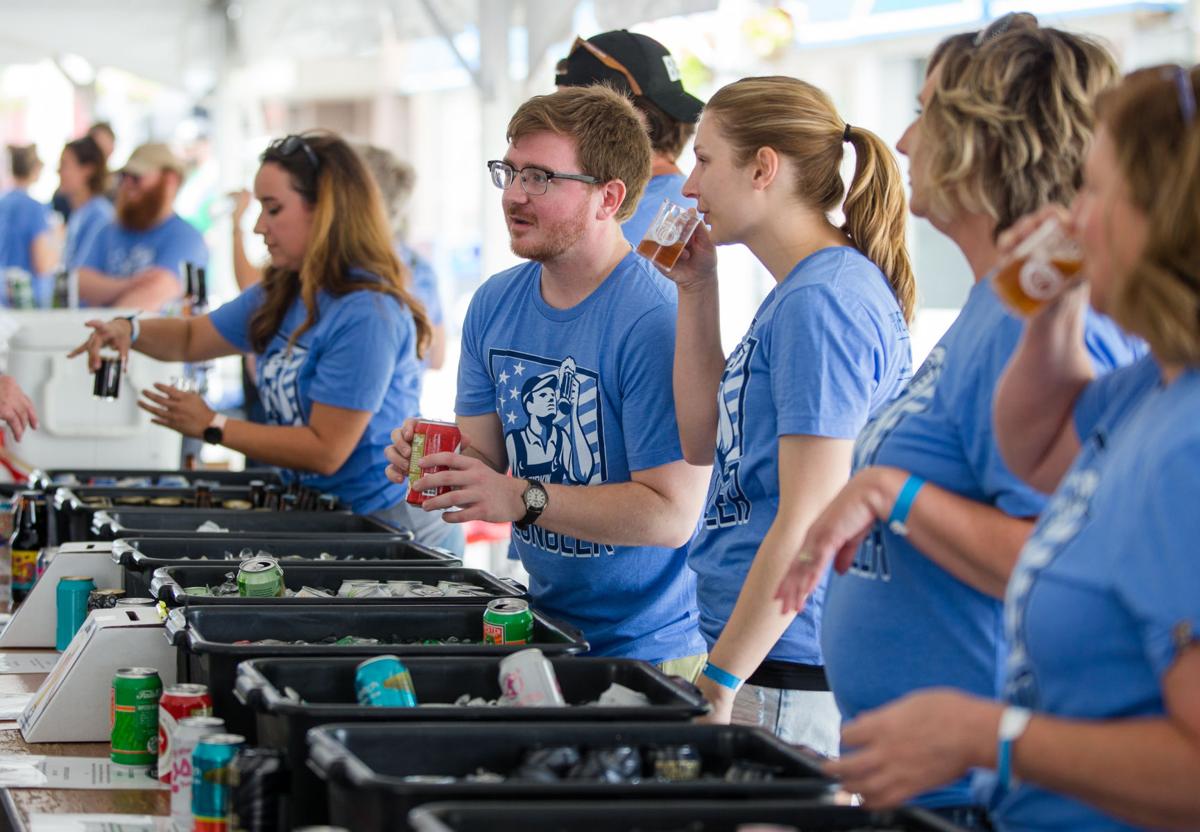 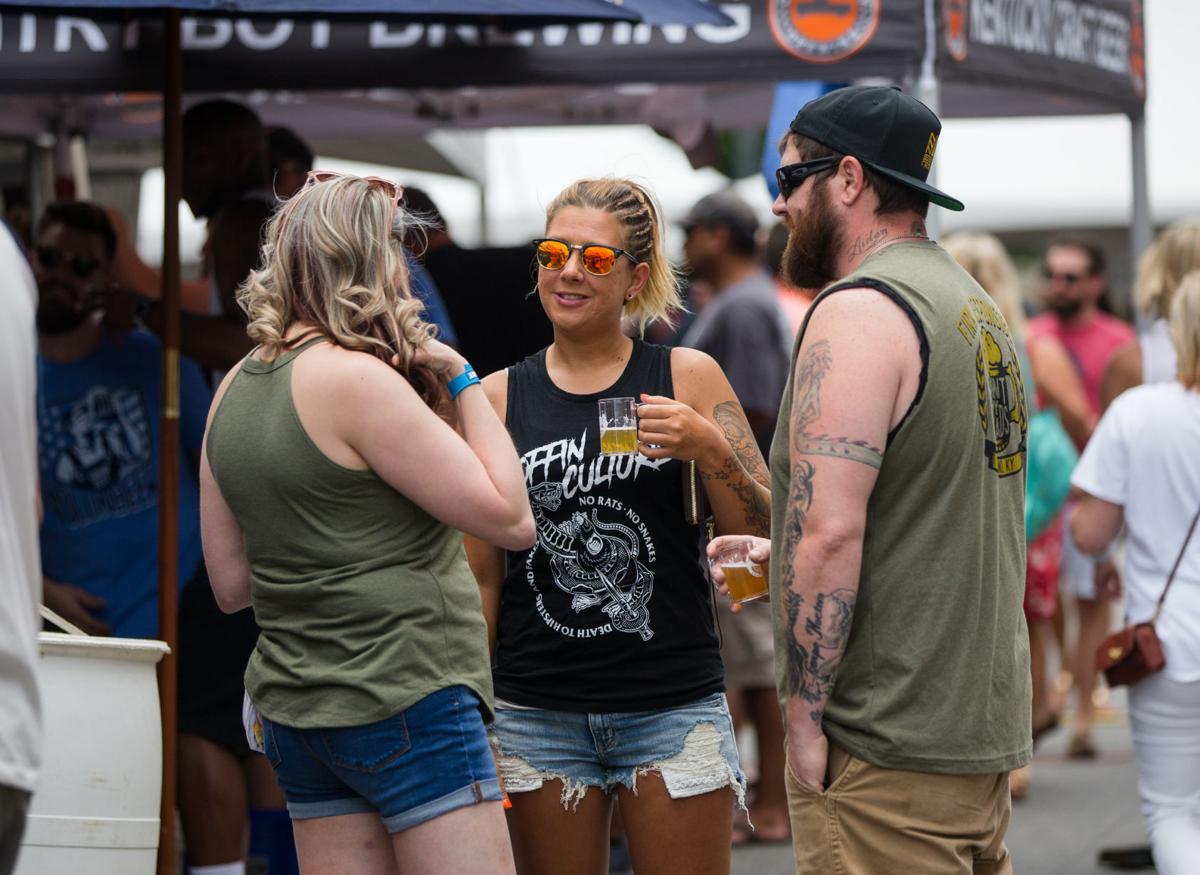 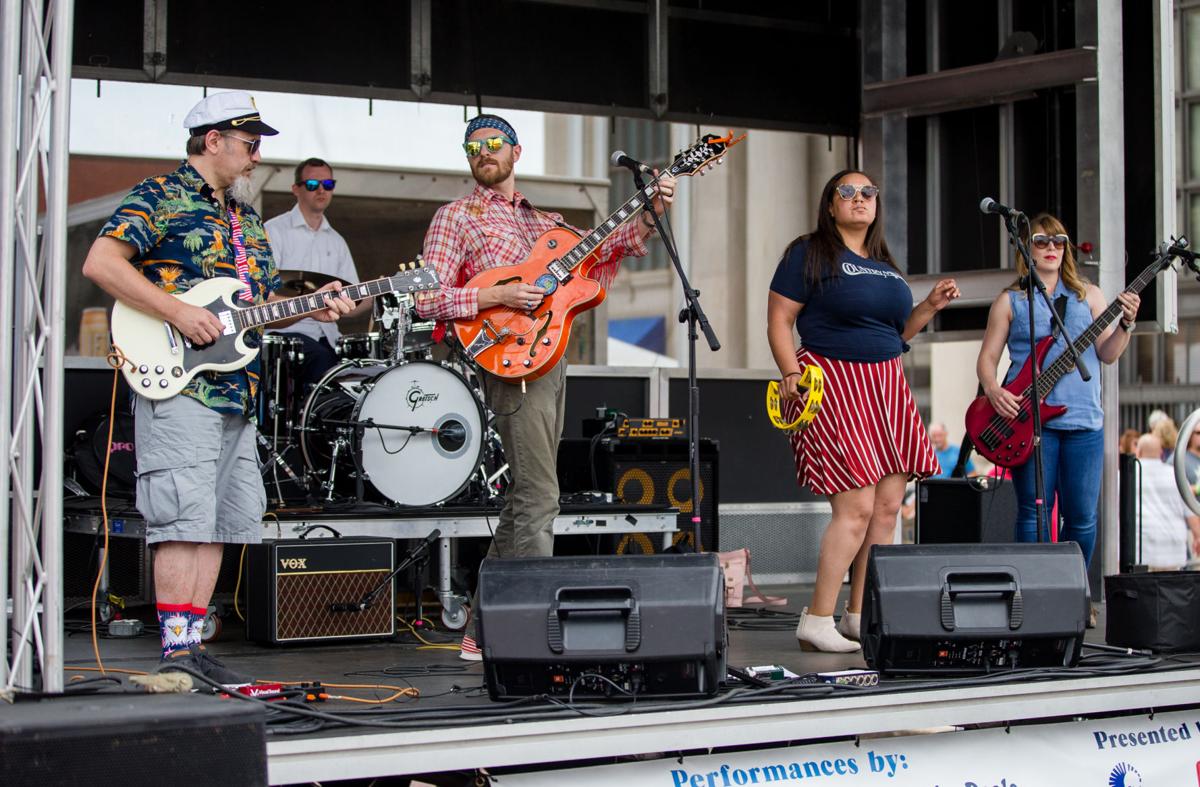 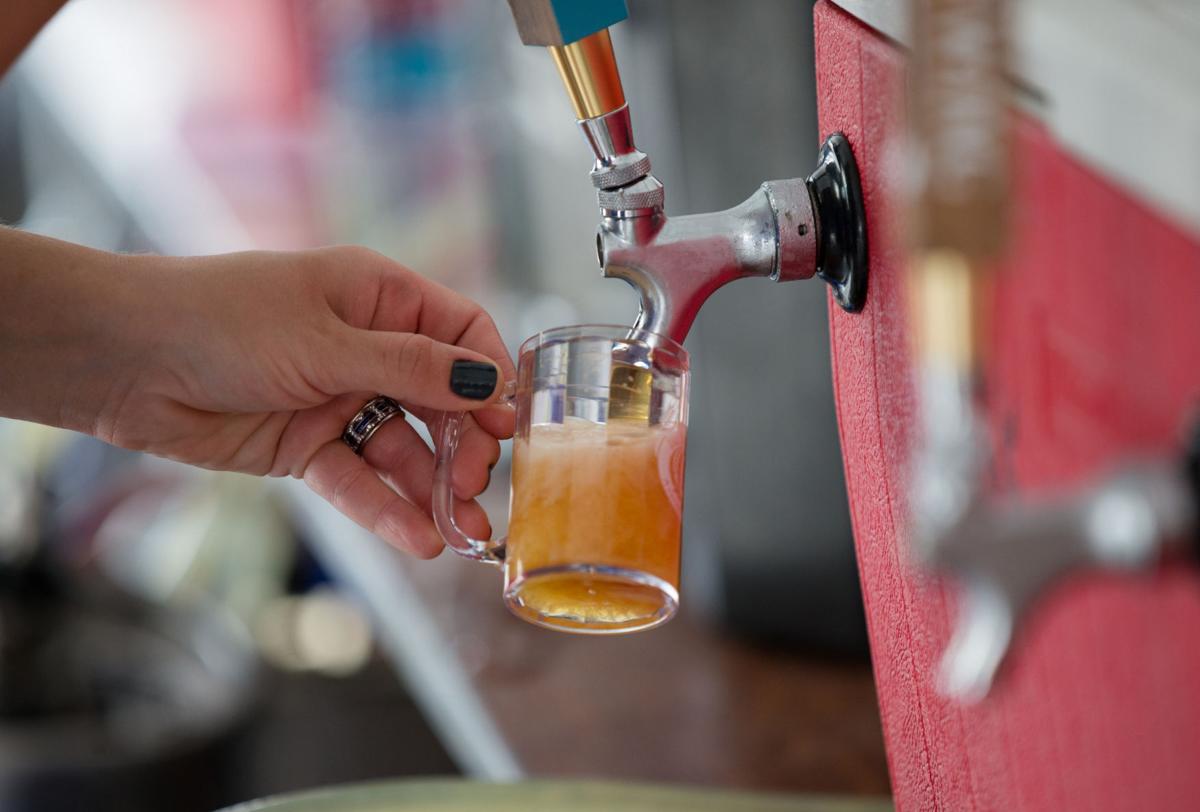 ASHLAND — Last year, Dave Wells' Get Fiddle guitar shop on Winchester Avenue was not quite open when the Firkin Fest came rolling out the barrels and the music that brought a couple thousand people downtown.

This year, Wells' Get Fiddle shop was ripe for a ready-made party out their front door, with Charlie Woods and Deep Hollow playing inside, and outside about 2,500 of their closest friends soaking in all of the good times at Ashland in Motion's fifth annual Firkin Fest featuring 147 craft beers, live music, local food and regional retailers.

"This is awesome seeing Ashland with this many people around having a good time and enjoying themselves, and it definitely brings people into the shops, which is always good for the businesses here," Wells said.

While Ashland is prepping for its signature summer festival, the five-day Summer Motion, Sue Dowdy, executive director of the Ashland Area Convention and Visitors Bureau, said it has been wonderful to see other summertime events bubbling up in the heart of downtown.

"You know we love it. It brings people to our area and particularly to downtown, and it is in its fifth year and it has just grown and grown and grown," Dowdy said. "They shop and buy food and enjoy the beer festival at the same time. Then they will have seen what we have to offer and will come back."

At the fest, VIPs got to sample small-batch brews kegged in the festival's namesake - firkins, which are room temperature and usually smaller casks that are typically a special small-batch run of a brewery's beer. Firkin Fest was well represented by a number of small Southern breweries as well as some of the most popular regional brews.

"So when you come to these beer festivals, you have a broad range of beer drinkers, people who are just getting into it or coming with friends that are into it, up through beer nerds and everybody in between," said Huntington resident Josh Holland, who is over sales in West Virginia, western Virginia, Eastern Kentucky and Southern Ohio for Country Boy Brewing. "We try to bring a variety of things to cover everyone's taste preferences. It's good to get out here and get some face-to-face (time) with our craft beer friends and get some instant feedback on our seasonals."

A poster child for the economic impact and boon in the craft beer industry in the region is Country Boy Brewing, which is based out of Lexington and Georgetown.

In the past couple of weeks, Country Boy, which produced 14,416 barrels of beer last year, announced it is breaking ground on a 19,000-square-foot, $1.8 million expansion of their Georgetown-based production facility. That will allow the brewery to brew up to 30,000 barrels of beer a year.

"They thought if they could sell 35 pints a day that they could stay in business," Holland said. "Now we have close to 50 employees and just announced the big expansion, and possibly as the year goes on, and maybe into the next year, we will crack the 15,000-barrel limit and will be considered a regional brewery. All of that has happened in seven years, which is pretty crazy. And doing things like this and getting out in the community is part of it; signing with good distributors is part of it; building these relationships with retailers, every piece of the beer industry. We try to take care of people and make good beer."

Whitney Lowe, who heads up Ashland in Motion, said it takes up to 100 volunteers to help man the festival. The Firkin Fest does a raffle each year, with every volunteer getting a raffle ticket with the possibility of winning $1,000 for a nonprofit of their choosing.

Dowdy said it's not surprising that so many people are willing to help their community.

Abby Kleineman Kuehne and Amanda Massie Cleary, the duo behind The Vault Market in Ironton, crossed the river to vend at the fest.

Cleary said they want to be a part of the Tri-State movement to grow all things local and make Tri-State downtowns vibrant again.

"Our shop is made up of retail products that are U.S.-based, and most of it is by local artists and artisans, and we also have vintage and antiques as well," Cleary said. "We are also acting as a small-business incubator for our city. Our goal is to help other people grow their businesses so they can open their own space in downtown Ironton. We love everything that the city of Ashland is doing. We knew Firkin Fest would be a great fit for us, because it is our kind of people. They love to have a good time, they love live music, they love good food and beer and community, and that is what we are all about."

Scott Horsfield, who co-owns the Huntington Heritage Station-based Full Circle Gifts and Goods with his wife, Noelle, said this was their first year coming to the fest in Ashland, where they lived for a few years when they first moved back to the Tri-State.

"You always want to support the Tri-State as a group and Appalachia as a whole," Horsfield said. "It is kind of cool to see people get exposed to our brand and our message and have fun with it."

Lowe said the impact of the fest ripples well after it is over, from more folks checking out downtown Ashland and First Friday events, to local craft beer retailers feeling that post-Firkin' Fest bump.

"I was talking to one of the managers who said that their sales spike like 20% in the weeks following the festival with people who have come to the festival and tried beer and then come in to pick up a six-pack of the beer they tried," Lowe said. "So they all see a rise in sales because of the festival."

Here’s a look at some of the upcoming brew festivals and celebrations in the region.

During this week business owners are encouraged to take advantage of the unique opportunity to host West Virginia craft beer-related events in efforts to support an in-state industry.

In Huntington, there are events at a number of restaurants and craft beer bars. On Tuesday, Backyard Pizza and Raw Bar, 833 3rd Ave., is hosting a West Virginia Craft Beer Week event with Big Timber Brewing, Short Story Brewing, The Peddler and Weathered Ground Brewery, with a happy hour party starting at 5 p.m.

There will be beers from all four breweries on tap and brewery representatives from a few of the breweries.

Ohio Brew Week, held July 12-20, is a nine-day festival that is now in its 13th year in downtown Athens, Ohio. In 2018, Ohio Brew Week included 45-plus all-Ohio breweries, 300-plus beers and hundreds of events. Stay up to date with Ohio Brew Week events, like their Facebook page, and follow them on Instagram and Twitter.

The seventh annual Rails and Ales is set for Saturday, Aug. 10, at Harris Riverfront Park in downtown Huntington. The festival features live music, food from the area’s food trucks and restaurants, an artisan market and, most importantly, beer. In 2018, the fest featured more than 250 ales, lagers and ciders from 64 breweries of all sizes from around the world. There were 17 West Virginia breweries represented at the fest, which drew more than 5,000 people to two sessions last year.

In 2019, the Better Beer Coalition is taking it back to their roots and hosting one session. They are also extending the VIP tasting to 90 minutes. VIP tickets are $60.

The VIP tasting runs from 3:30 to 5 p.m., while general admission opens at 5 and runs four hours until 9 p.m. GA tickets are $40. There are also designated driver tickets for $20 at the gate. You must be 21 to enter and the event, which has a series of tented beer gardens, is held rain or shine. There are no refunds.