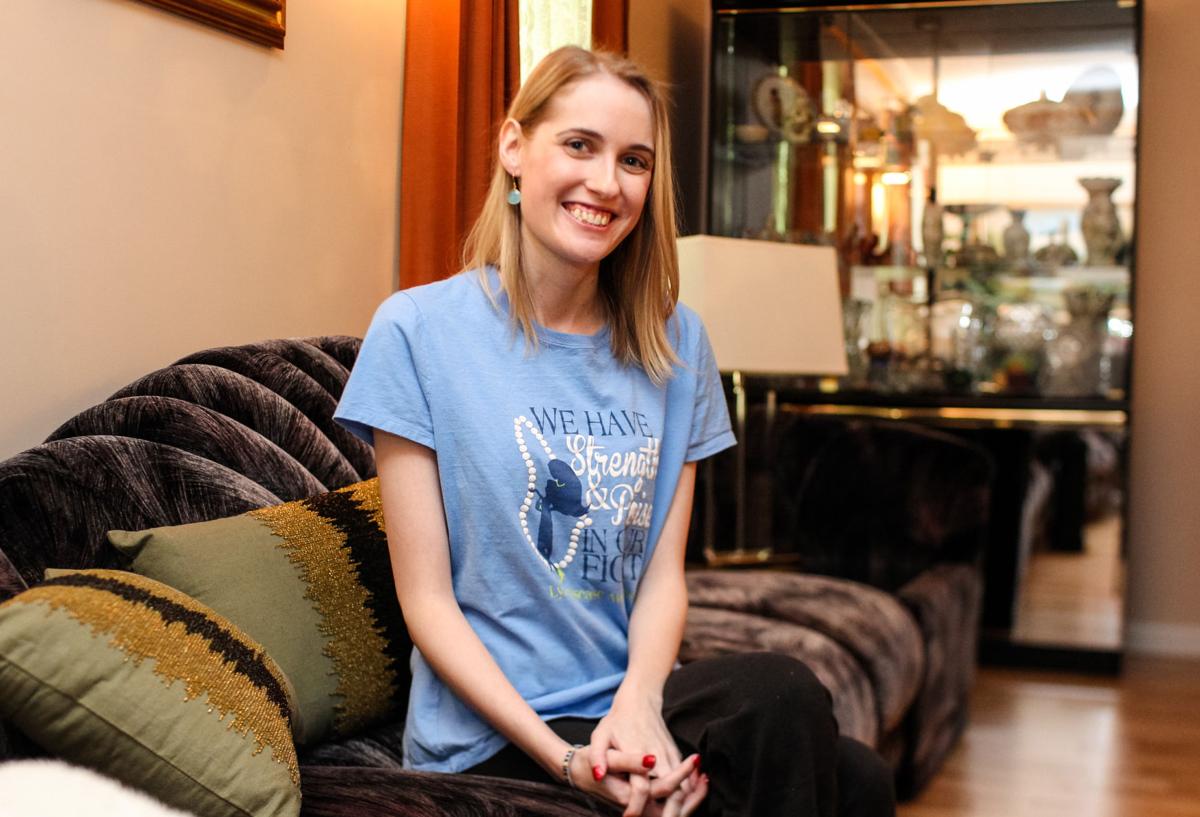 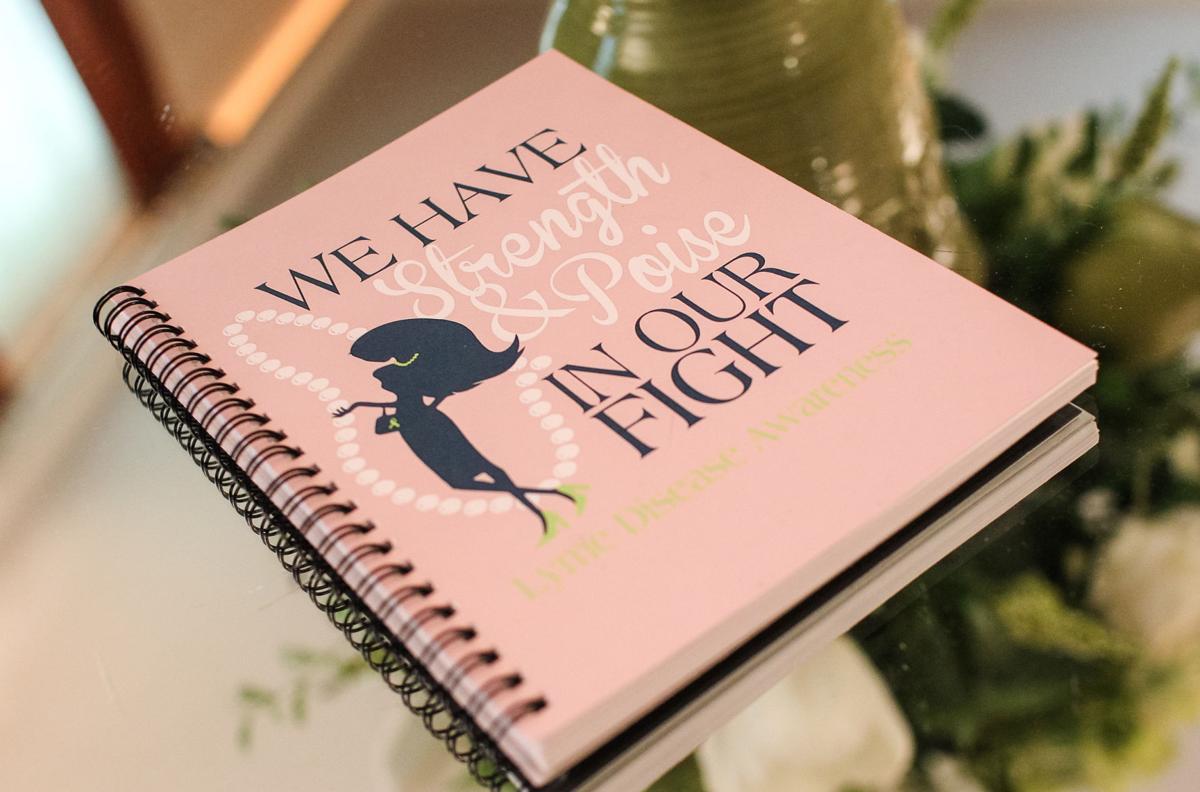 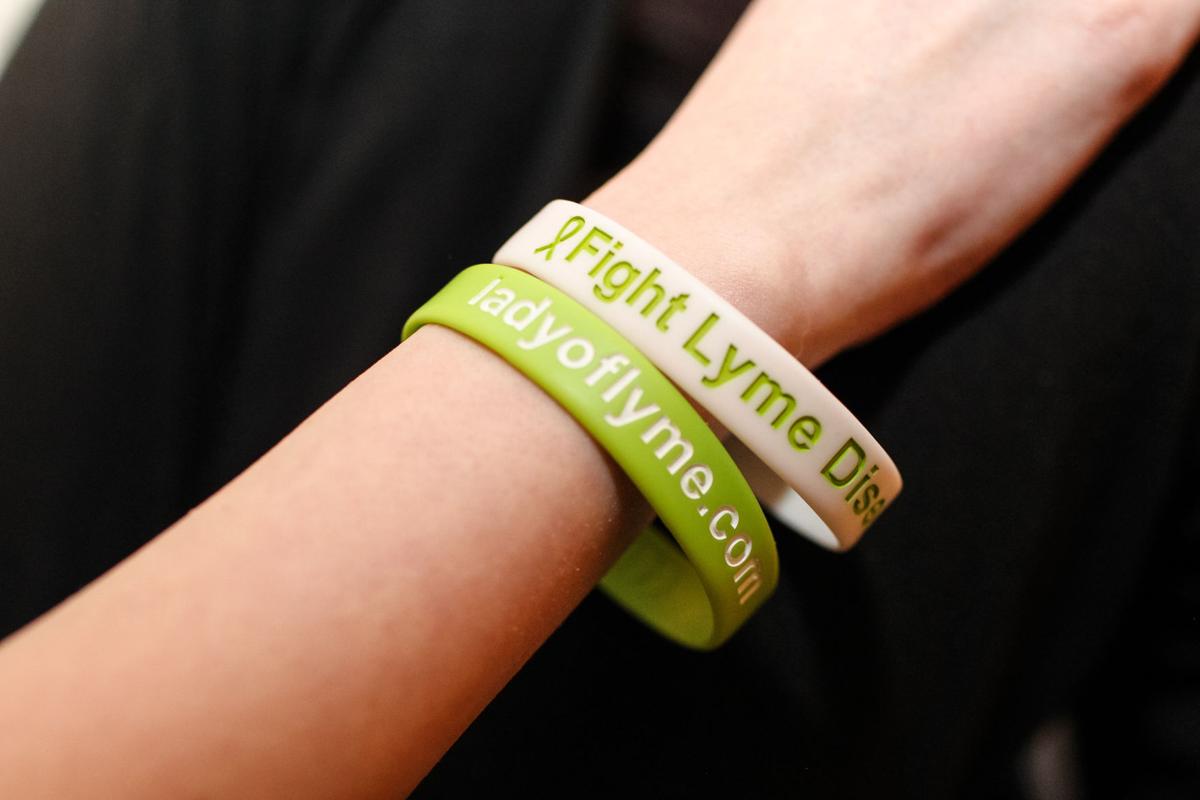 Sholten Singer/The Herald-Dispatch Christina Kovacs shows off merchandise available on her website on Tuesday, May 24, 2016, at her home in Ashland. Kovacs was diagnosed with Chronic Lyme Disease and now operates a blog to spread awareness.

Sholten Singer/The Herald-Dispatch Christina Kovacs shows off merchandise available on her website on Tuesday, May 24, 2016, at her home in Ashland. Kovacs was diagnosed with Chronic Lyme Disease and now operates a blog to spread awareness.

ASHLAND - Confined to her childhood home spending most of her time in bed is not where 27-year-old Ashland native Christina Kovacs saw herself being at this age.

Before this, she was living in Los Angeles going to the Fashion Institute of Design and Merchandise with the goal of doing merchandise design. However, a mystery illness that had plagued her for years had reached the point she could not keep up and live on her own, so she had to drop out and move back home to Ashland to live with her parents.

It took five years and over 50 different doctors across the country to finally figure out what was wrong with her - she had chronic Lyme disease.

"It took a doctor looking at me as a whole," Kovacs said. "Even though your symptoms are spread out all these different places, you have one thing wrong with you."

May is National Lyme Disease Awareness Month. The Centers for Disease Control and Prevention estimates 300,000 Americans become infected with the disease each year.

Lyme disease is a bacterial infection spread by ticks. The tick will get the bacteria off an animal, such as a deer carrying the disease, and when the infected tick attaches itself to a human, it spreads the bacteria through the blood, said Dr. Mahmoud Shorman, associate professor of infectious diseases with the Marshall University Joan C. Edwards School of Medicine.

Shorman said the tick must be attached to its host human for 48 hours for the infection to spread.

"If the tick is removed immediately, you are not at risk," he said.

Still, according to the CDC, in 2014, Lyme disease was the fifth most common nationally notified disease in the country, with 96 percent of cases occurring in 14 states, not including West Virginia, Kentucky or Ohio. Shorman said there are over 50 cases of Lyme disease diagnosed in West Virginia a year.

But Kovacs knows just because most cases occur in northeast and the upper Midwest, residents of the Tri-State still need to be on the lookout, particularly in the early summer months when ticks are still very small.

"Since my diagnosis, I've met a lot of people in the area who have Lyme disease," she said. "It gets misdiagnosed often as Lupas, fibromyalgia, chronic fatigue - those are the common ones. Then when people don't get well on the treatments for those, that's when they start to look further."

Kovacs said she was never outdoorsy and never knew she had a tick. In fact, the final specialist she saw tested her for everything and she was sure it was not going to be Lyme disease.

"I had researched everything imaginable," she said. "I had spent hours and hours on the internet looking at things myself, and I didn't think so because I was not an outdoorsy person. They've developed a lot of this area, but growing up there was a wooded area and we would play flashlight tag or spotlight. We would run back there and that was the only time I was in the woods. It never occurred to me that if you were playing outside at night you needed to check yourself for ticks."

Kovacs' issues began in 2007 with flu-like symptoms. She spent about a month in bed and was put on antibiotics.

"I never felt the same after that, honestly," she said.

She continued to have recurring and new symptoms for the next five years; all while going to school at the University of Louisville and working full-time.

In that time she was misdiagnosed with many different diseases, but none felt right.

Her diagnosis did not come until 2011.

"The doctor found that I had some brain damage," she said. "He asked if I had been in an accident and I hadn't. I didn't play sports or anything that would contribute to it. That's when he realized it was an internal issue."

Today, Kovacs spends most of her time in bed. She is on strict diet and has home health visits to give her nutritional IVs.

"My parents do everything for me," she said. "They cook my meals for me. Most days I'm just managing symptoms and fatigue. I have a hard time standing. I have issues with my blood pressure. I have migraines and seizures. Lots of stomach issues and pain. Just a wide array of things."

Sadly, there is no cure, but people with Lyme disease can enter remission, which is where Kovacs is fighting to get to today. She also has two co-infections, which is common - Bartonella and Protomyxzoa.

"Once the disease is chronic, it's a long process to get well from it," she said. "There isn't one thing you can give to someone, so in most cases patients like will just try all kinds of different things, protocols and treatments. You also have to go in and repair the damage that has been done from the disease itself. It takes a lot of years of a person's life when it gets to this stage."

Kovacs' struggle has made her equally passionate about spreading the word about Lyme disease and prevention.

"This is something that can be avoided if you are knowledgeable to look for it and what to do," she said.

Shorman said diagnosis of the disease can be tricky. Even if someone catches the tick, it can take up to four weeks for antibodies to start working, so the test can come back negative if it is taken too soon.

The best thing to do is save the tick and have it sent to a lab for testing. Shorman said while the bug is tested, treatment can begin before the test is even confirmed.

The most common and known sign of Lyme is a bulls eye shaped rash. Other symptoms that follow are flu-like - muscle pain, joint aches, fever and enlarged glands.

As the disease progresses, symptoms intensify and can lead to meningitis, heart issues like irregular heart beat and joint swelling and pain.

Shorman said if caught early, a person will begin feeling better with medication after three or four days.

The best thing, however, is preventing a tick bite in the first place.

Ticks live in moist and humid environments, particularly in and near wooded or grassy areas. A person may get a tick during outdoor activities around the home or when walking through leaves and bushes. To avoid ticks, walk in the center of trails and avoid walking through tall bushes or other vegetation.

Shorman also suggested wearing long sleeves when hiking and tucking the pant leg into your socks.

Also use repellents like DEET. Kovacs said when she is able to go outside she uses gardenia oil on her and her dog as a natural repellent. Just a few drops in a spray bottle of water does the trick, she said.

Also make sure to check for ticks, especially in places like the groin, armpit, belly bottom and in your hair.

If a tick does attach itself to the body, Shorman said the best way to remove it is with tweezers, making sure to remove the entire parasite from the body. Then save the tick just in case it needs tested later on.

To learn more about Kovacs and her life with Lyme disease, visit her blog at www.ladyoflyme.com. Merchandise is also available for purchase, designed by Kovacs, and all proceeds go to Lyme disease research.