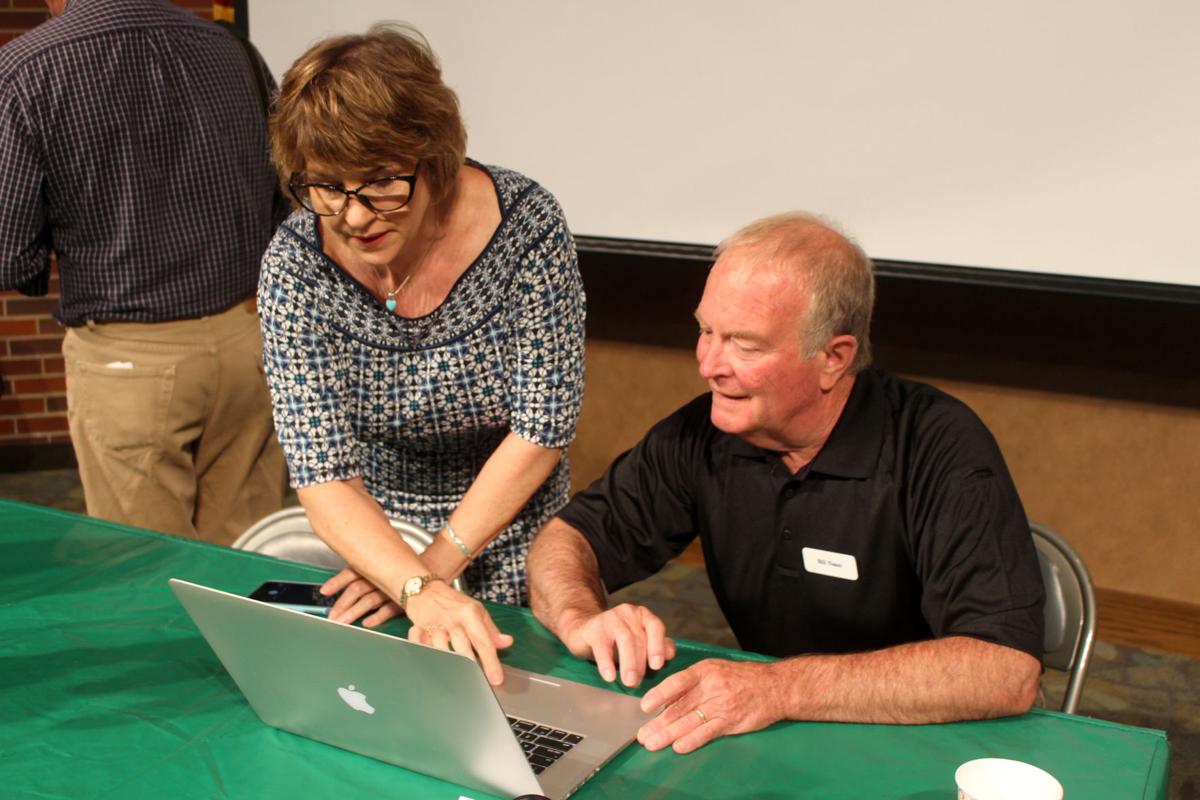 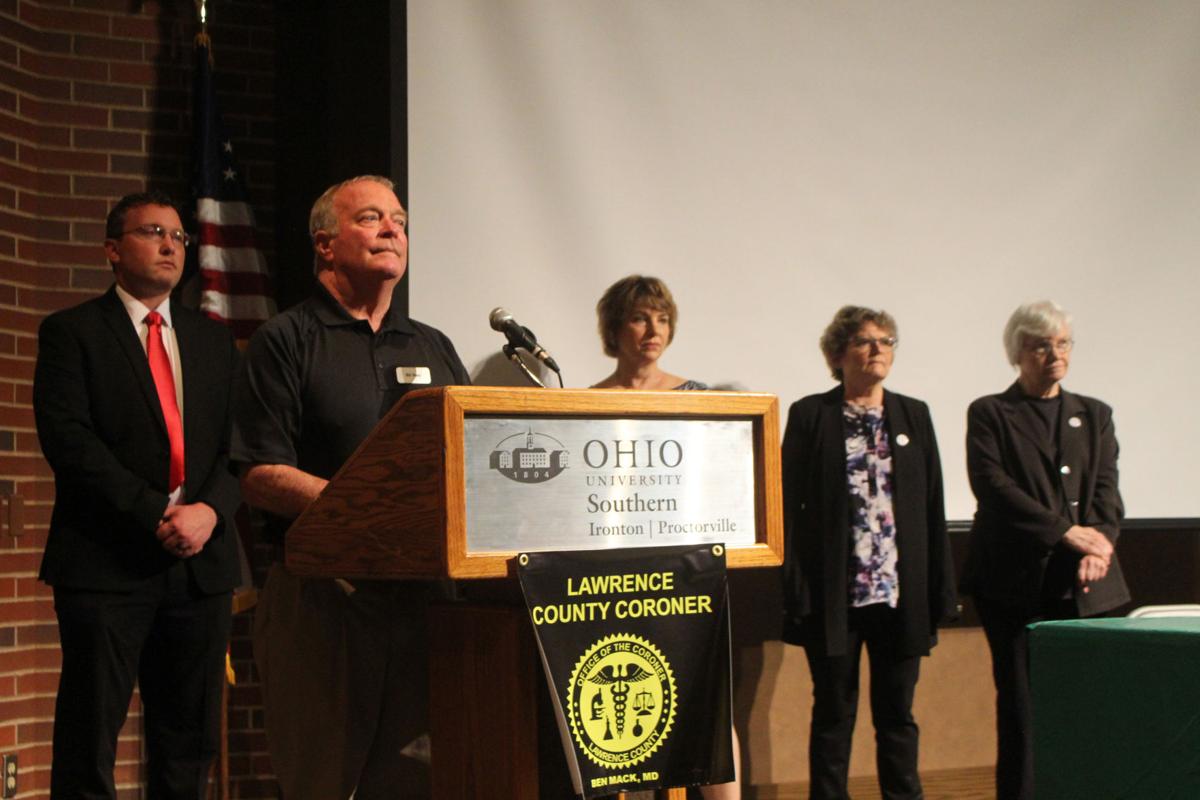 Courtney Hessler / The Herald-Dispatch Members who worked to solve Lawrence County’s “Belle in the Well” case pose together July 29, 2019.Bill Nenni, the case investigator with the Lawrence County Coroner's Office, stands at the podium. 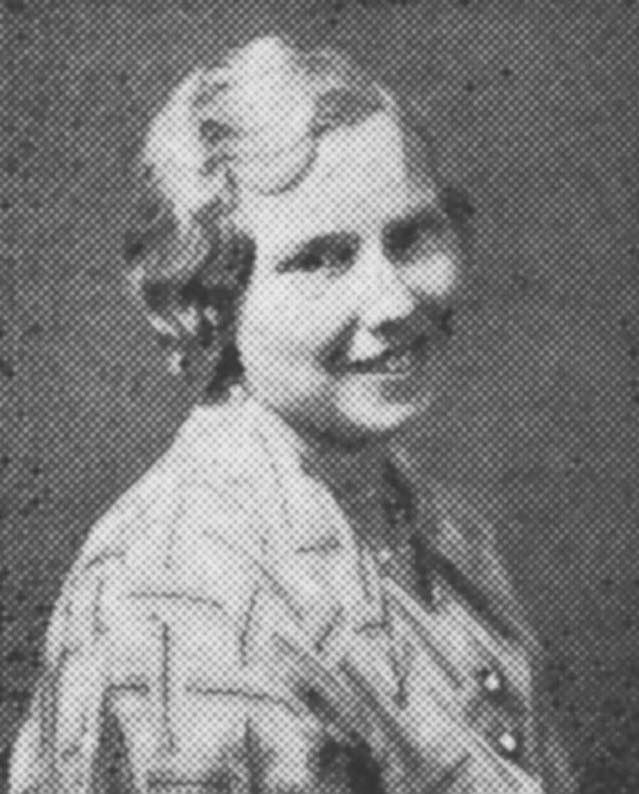 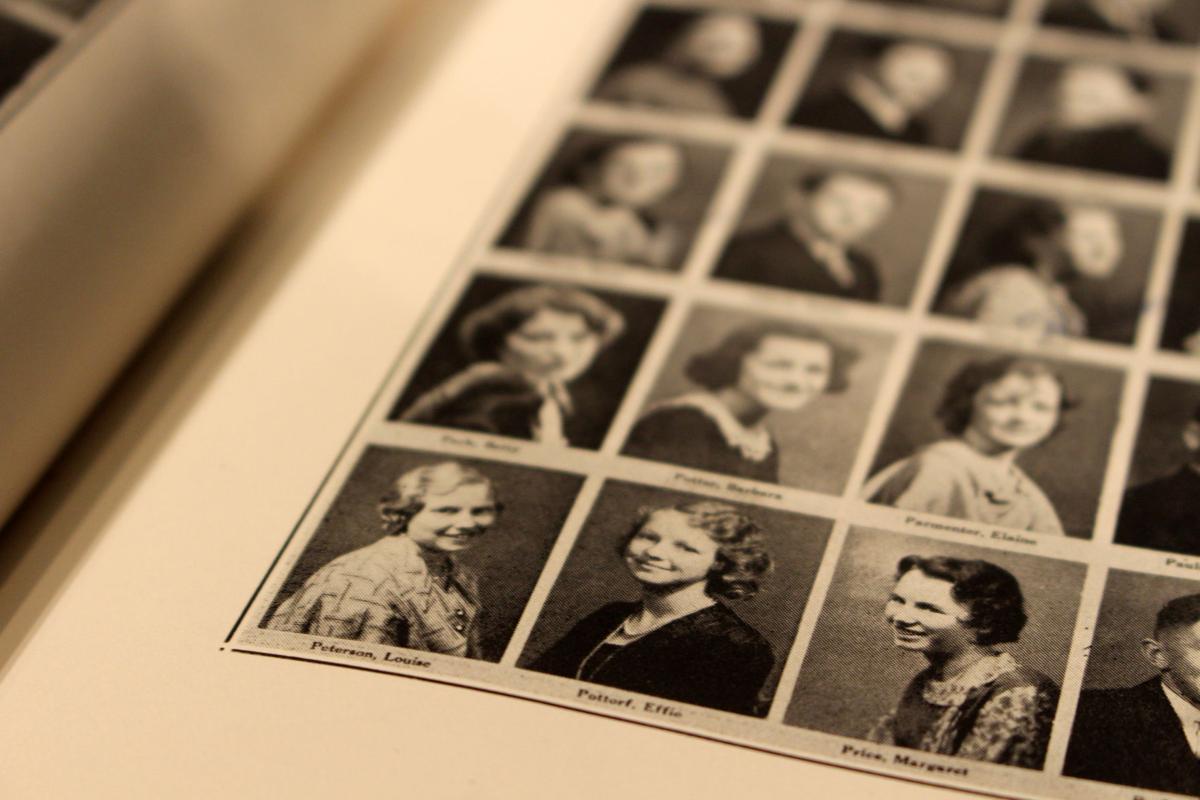 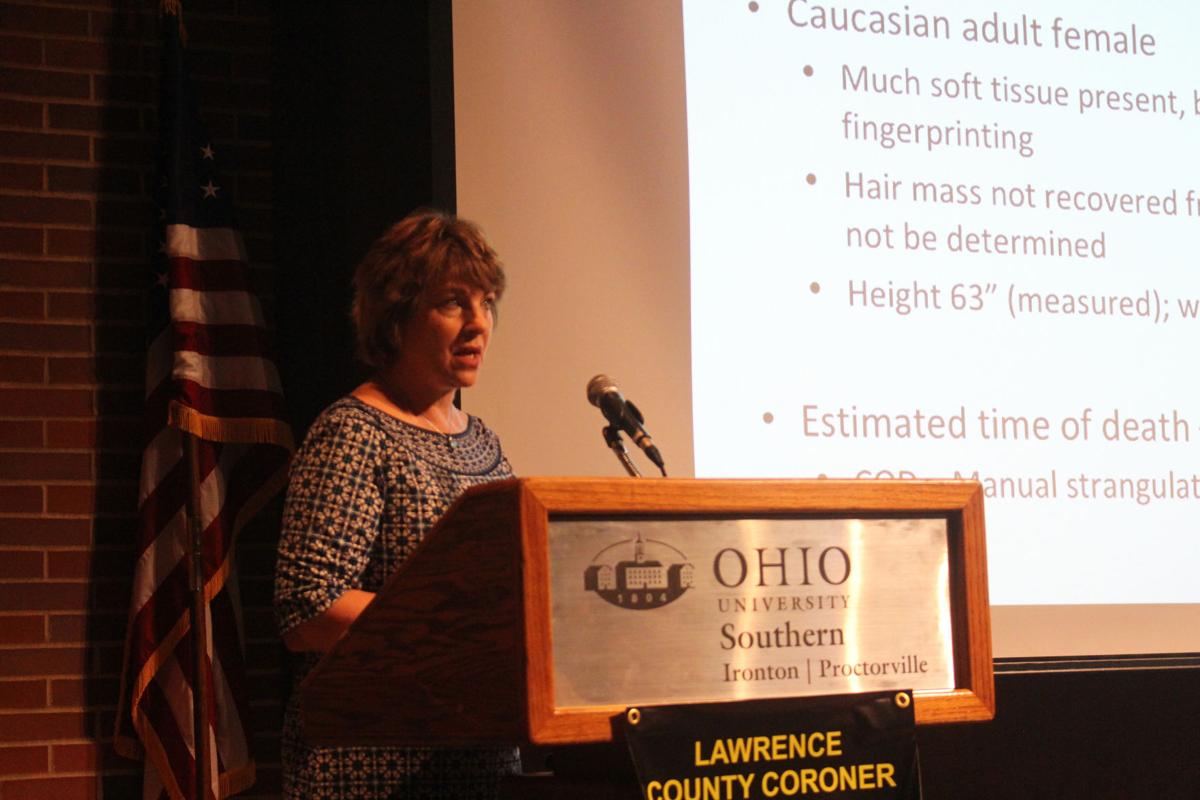 Courtney Hessler / The Herald-Dispatch Dr. Elizabeth Murray, forensic anthropologist with NamUs and Mount St. Joseph University, gives a presentation on the identification of Lawrence County’s Belle in the Well, July 29, 2019. 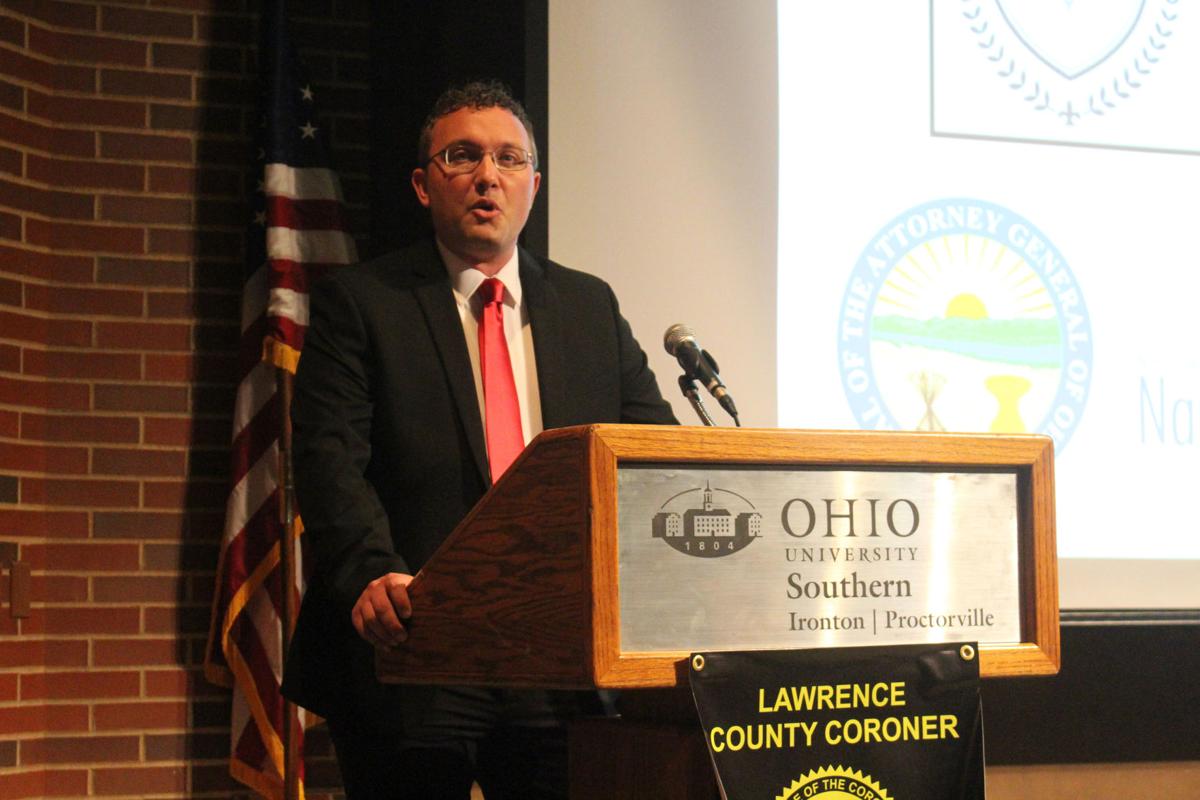 Courtney Hessler / The Herald-Dispatch Dr. Ben Mack, of the Lawrence County Coroner’s Office, gives a presentation on the identification of Lawrence County’s Belle in the Well, July 29, 2019. 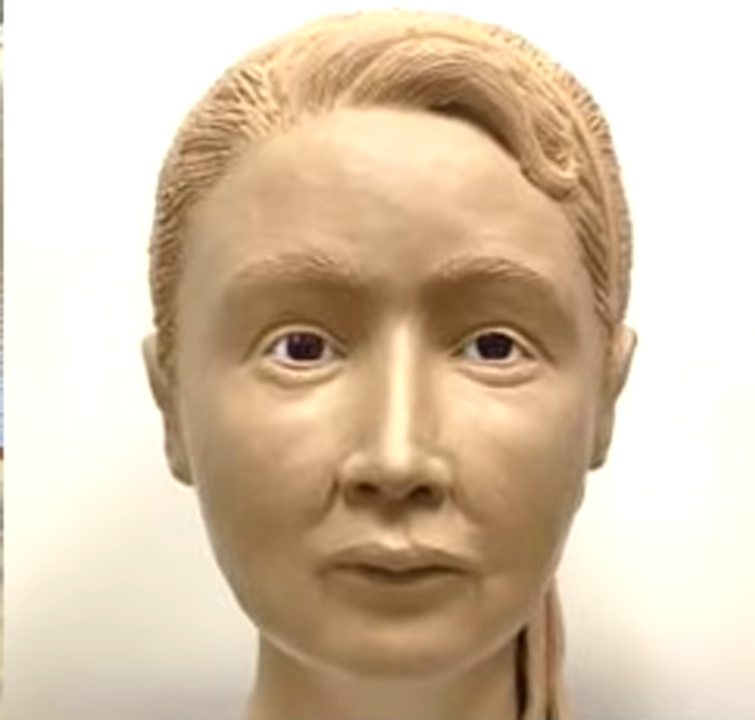 Courtney Hessler / The Herald-Dispatch Members who worked to solve Lawrence County’s “Belle in the Well” case pose together July 29, 2019.Bill Nenni, the case investigator with the Lawrence County Coroner's Office, stands at the podium.

Courtney Hessler / The Herald-Dispatch Dr. Elizabeth Murray, forensic anthropologist with NamUs and Mount St. Joseph University, gives a presentation on the identification of Lawrence County’s Belle in the Well, July 29, 2019.

Courtney Hessler / The Herald-Dispatch Dr. Ben Mack, of the Lawrence County Coroner’s Office, gives a presentation on the identification of Lawrence County’s Belle in the Well, July 29, 2019.

IRONTON, Ohio - Thirty-eight years after being killed and tossed into a cistern to be forgotten, Louise Virginia Peterson Flesher - known for decades as "Belle in the Well" - has finally regained her identity, thanks to evolving forensic science technology and Lawrence County authorities' never-wavering goal of solving the case.

"Belle in the Well," also known as the Chesapeake Jane Doe, is the name given to the strangled woman found in a cistern, a watertight receptacle for holding liquids, along McKinney Creek and Greasy Ridge in Windsor Township in Lawrence County on April 22, 1981. Her body was likely in the cistern for no more than two years before she was found.

After three decades, it took the DNA Doe Project 14 months of research and DNA testing to identify Flesher after extensively researching her family tree. The Familial DNA testing, which uses genetic material from relatives to identify family members, is a fairly new forensic practice, and was brought into the spotlight last year when it was used to identify California's Golden State Killer.

The next step, investigators and distant relatives said, is to figure out more about Flesher and what led to her demise.

Flesher was born June 16, 1915, in Fair View, West Virginia, near Clarksburg. Authorities believe she lived there for five years before moving to Kanawha County. The next record is of her living in Casper and Cheyenne, Wyoming, between 1933 and 1942. Flesher returned to West Virginia by 1944 and lived in Parkersburg until at least 1956.

She had three daughters, one of whom died in 1959. The remaining two daughters, now about ages 83 and 79, live in Wyoming.

That's all authorities knew of her life as of Monday, but they're hoping to learn more.

Lawrence County Sheriff Jeff Lawless said the case remains an active investigation and police are searching for leads. He asked Monday for the public to come forward with any information they might have about Flesher's life, including pictures of her.

The only one investigators have comes from her mid-1930s Wyoming high school yearbook, which was purchased on e-Bay. Volunteers believe she might have been on the high school's swim team, just from pictures from the yearbook alone, but that is pure speculation.

The Belle in the Well

"Belle" had been weighed down by a cinder block tied to a rope around her neck. An autopsy determined she had died from strangulation, not from drowning, Lawless previously said. She was found wearing a pair of gray flannel pants and a lightweight shirt under a gray pullover, along with a red cable-nit cardigan sweater, with rubber bands on her wrists.

Authorities found in her possession a key to a locker at the 4th Avenue Greyhound terminal in Huntington, a bus ticket, a pay stub and a Jerry Falwell commemorative coin.

Early in the investigation, authorities believed she could have been a victim of a Charleston area motorcycle group since she had elastic bands around her wrists similar to what some motorcyclists wear to keep clothing from flapping. They also said the spot where she had been found was a popular hangout for motorcyclists at the time.

But now identified as having died while in her 60s, investigators aren't so sure.

The Belle in the Well case was Lawrence County Coroner Investigator Bill Nenni's first. His father, Dr. Harry Nenni, was the coroner at the time she was found. It has always been on the back of his mind with hopes he would one day solve it.

"This is probably why I ended up going to work at the (...) coroner's office, because they had no one to actually investigate this case," he said.

Now that he met that goal, he isn't sure what to do with his time.

"I spent so many years of not knowing, that I guess when you tell me who she is, it's like, it's alien to me. I don't know how to describe that," he said. "I go to bed at night and I think, 'Jeez. I know who this is and I've wondered that my whole life. Now that's changed and I need a new purpose.'"

Flesher's condition by the time she was found left little DNA to be tested. A single molar tooth was what authorities used to link her to her daughter.

The case was closed until 2009 when forensic anthropologist Elizabeth Murry, of Mount. St. Joseph University and a consultant for the National Missing and Unidentified Persons System (NamUs), reached out to Bill Nenni about reopening the case.

Her body was exhumed in June 2011 and X-rays and dental exams helped complete a facial reconstruction.

The case remained silent until February 2017 when Murray met Collen Fitzpatrick during a conference and learned of the newly forming DNA Doe Project's use of forensic genetic genealogy to make identifications.

The group took on the case and solved it within months, using GEDmatch, a public genetic genealogy database. The database showed her family was most likely from the Huntington area, but heavy intermarriage among her families made identifying her difficult.

Flesher's name came up first in March 2018, but investigators thought she was too old and moved on. Another facial reconstruction was released in May 2018 by then-Attorney General Mike DeWine.

In February 2019, the DNA Doe Project tentatively identified Flesher, and it was confirmed this month after DNA was obtained from her youngest daughter.

The DNA Doe Project estimates the 14-month journey consisted of more than 30 volunteers who dedicated more than 10,000 hours to the case. Testing and research cost them about $3,440.

Flesher's immediate family is estranged and did not want to participate publicly in the case.

Nenni said Flesher's youngest daughter believed he was trying to scam her when he originally called, but eventually agreed to the testing after seeing how dedicated he was to the case.

Paula Solar, of Huntington, a distant relative of Flesher, attended Monday's press conference to learn more about the case. Solar is a member of a Facebook group focusing on her family's genealogy, which helps about 75 members figure out their family tree.

The group had been contacted by DNA Doe Project member Margaret Press, who asked its members with help in identifying the Belle, but left out the details of her significance.

"I was just totally blown away, because I never looked at genealogy as helping solve a cold case," Solar said.

For the next few weeks, Solar said the group will be abuzz with people trying to find out more information about Flesher to help the investigation.

Flesher is currently buried in an undisclosed location on private land.

Solar said she believes there should be some type of memorial stone on her grave, if the owner of the land would allow it. Nenni was against it, stating he believed vagrants would damage the site or any memorial while thrill seeking.

The biggest questions that remain are who killed Flesher, how she was killed and how she ended up in the cistern. Other questions remain, too.

David Marcum, of the Lawrence County Prosecutor's Office, said while prosecution on the case is unlikely, authorities still want to know the truth.

The locker key found on Flesher opened a locker containing clothing, bus tickets and family photos, one investigator told him. The other said by the time they got there, it had been cleared. Nenni said without evidence telling him otherwise, he believes the latter.

The DNA Doe Project has solved about a dozen cases nationally, five of which come from Ohio, but the future success for the group is uncertain, as the main genealogy database it uses - GED Match - has automatically switched its users to opt out of their DNA being used for law enforcement investigations.

They solved Flesher's case shortly before the change happened.

Without about a million users going into their accounts and selecting to opt in, it would be nearly impossible to solve cases like Belle in the Well, officials with the DNA Doe Project said.

Anyone with information about the case can contact the sheriff's office at 740-532-3525.