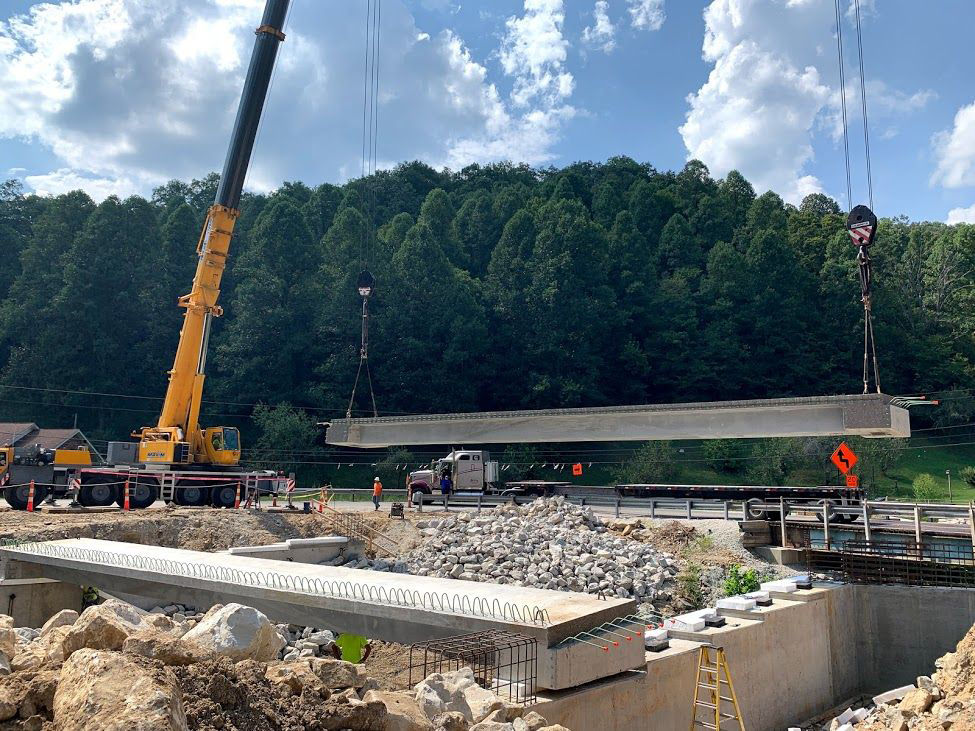 Submitted photo Girder erection for the new Fourteen Mile Bridge near East Lynn in Lincoln County. Construction is expected to last until mid-November. 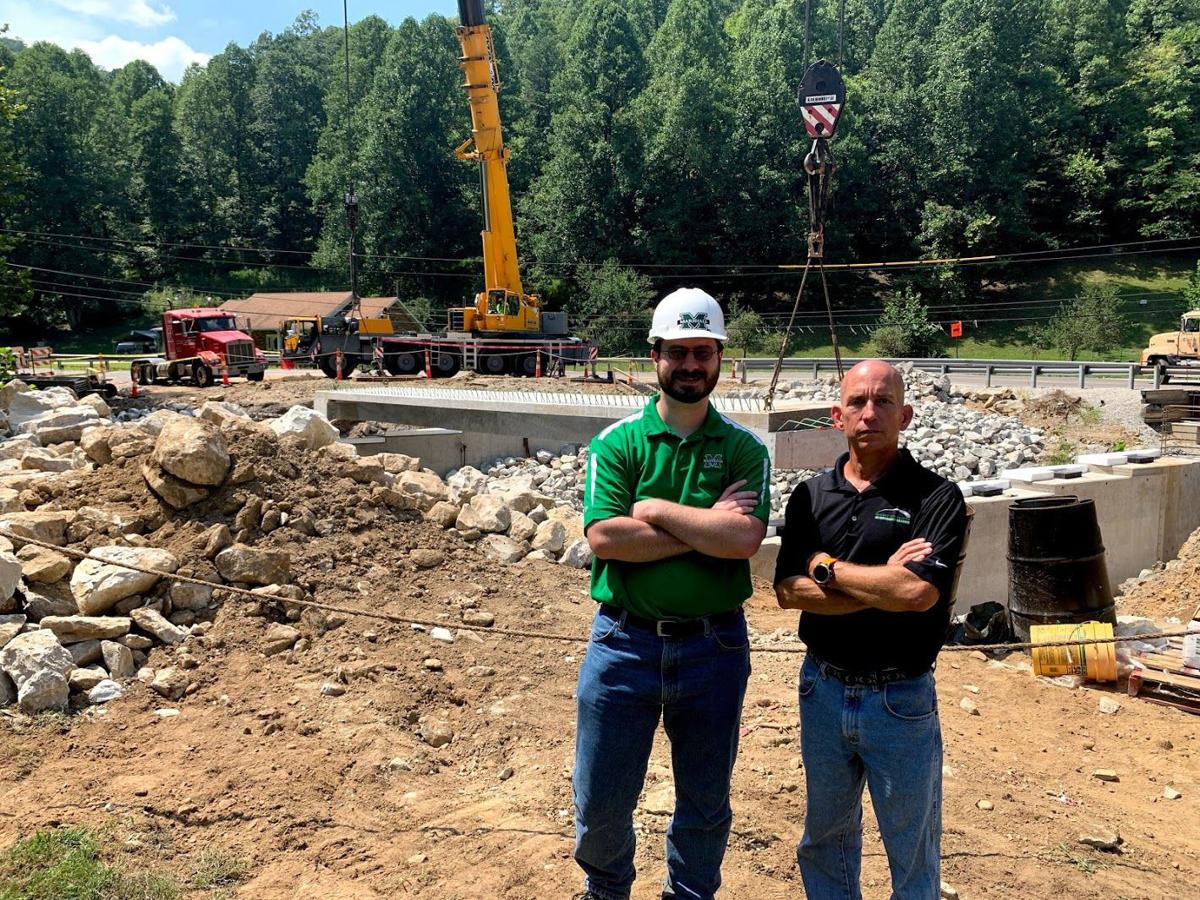 Submitted Photo Dr. Greg Michaelson, left, and Dr. Karl Barth pose for a photo on he side of a new press-brake-steel-tub-girder bridge in Lincoln County near East Lynn. The two conducted many years of research and brought the technology to WV for the first time. 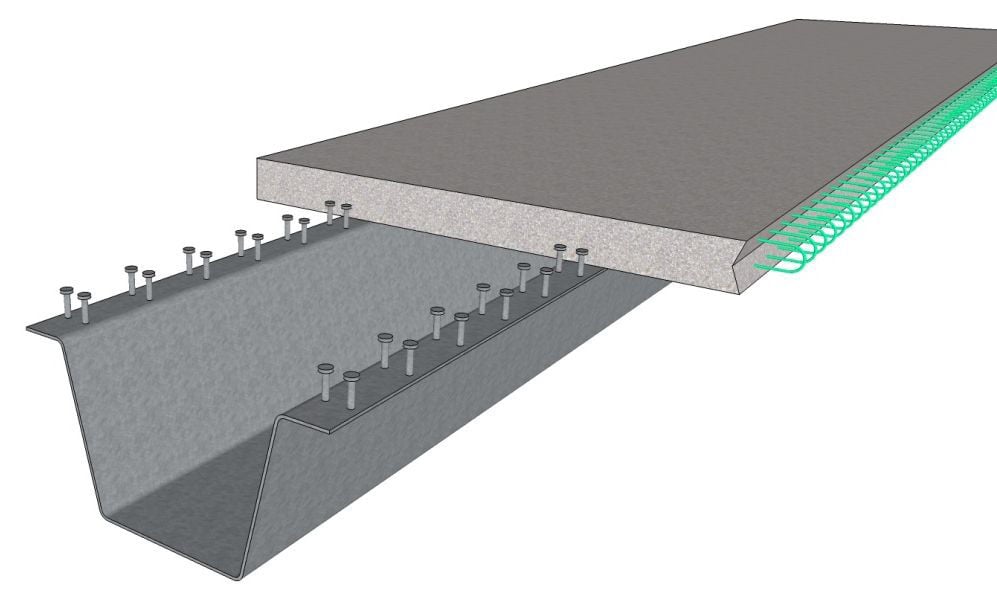 Submitted photo / Instead of cutting steel, the plates are instead put it into a press brake and bent into a bathtub shaped beam. Concrete can be poured on top of it and shipped to the construction site via truck. 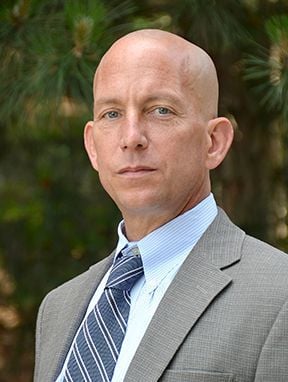 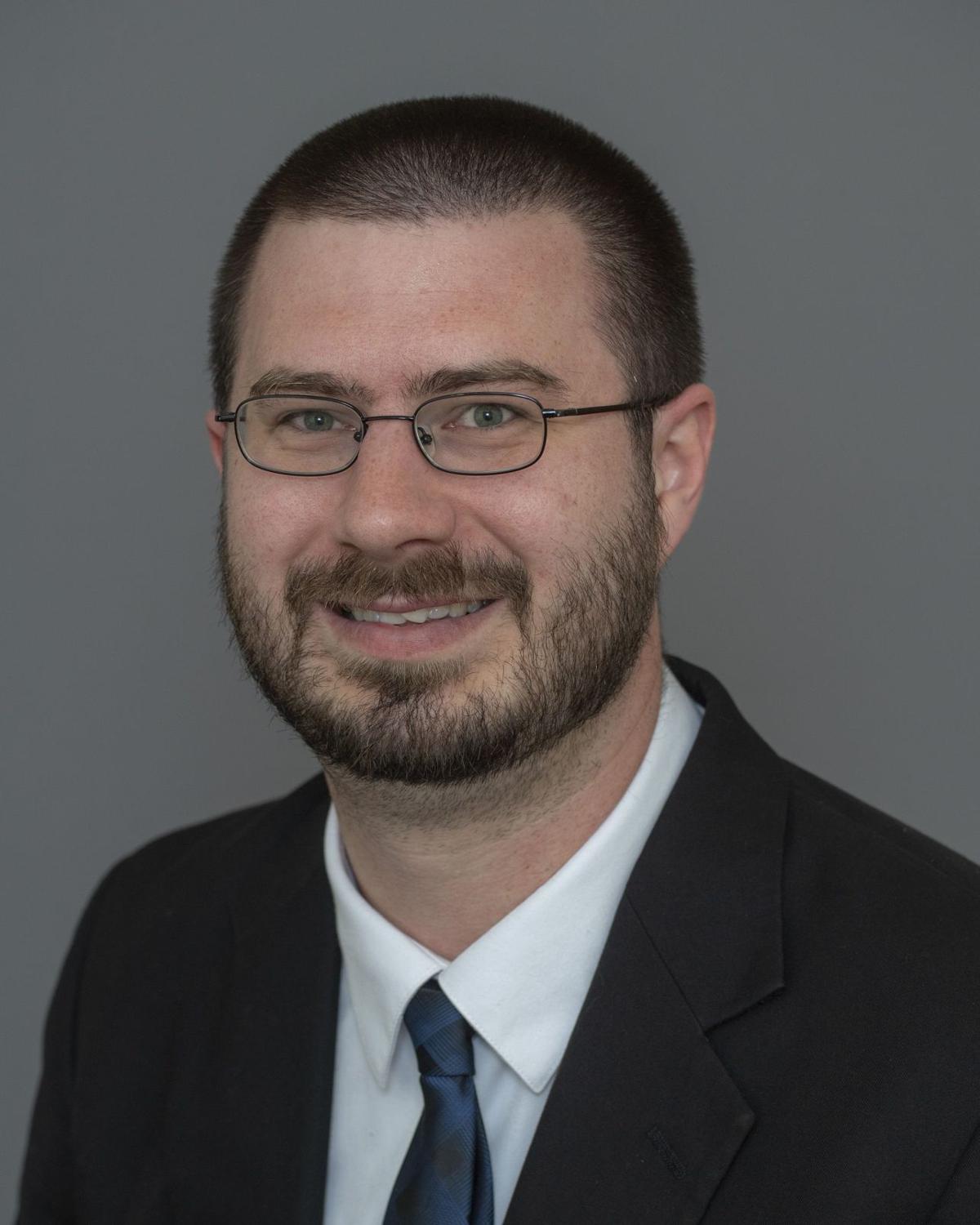 Submitted photo Girder erection for the new Fourteen Mile Bridge near East Lynn in Lincoln County. Construction is expected to last until mid-November.

Submitted Photo Dr. Greg Michaelson, left, and Dr. Karl Barth pose for a photo on he side of a new press-brake-steel-tub-girder bridge in Lincoln County near East Lynn. The two conducted many years of research and brought the technology to WV for the first time.

Submitted photo / Instead of cutting steel, the plates are instead put it into a press brake and bent into a bathtub shaped beam. Concrete can be poured on top of it and shipped to the construction site via truck.

EAST LYNN, W.Va. — A new bridge under construction in West Virginia is unlike anything the state has seen before.

The design of the structure is viewed as more economical than other short-bridge designs and takes less time to erect, according to proponents of the design.

Crews began work to erect the bridge Aug. 20 near East Lynn in Lincoln County, District 2, and work is expected to continue through November, according to Marshall University.

The press-brake-formed tub girder, or PBTG, system consists of galvanized shallow trapezoidal boxes fabricated from cold-bent structural steel plate. A concrete deck is precast on the girder, making it a modular unit that can be transported by truck to the project site. The system is ideal for spans up to 60 feet. It saves time and costs for bridge owners since it can be installed as a single modular unit usually in one or two days by local crews, will last for an estimated 100 years, and requires minimal maintenance during its lifetime.

For those who aren't fluent in engineering or construction lingo, it simply means that instead of taking a piece of steel and cutting it to form the bridge, it's put into a machine and bent into shape.

Michaelson, a Bluefield, West Virginia, native, compared the steel plate to lumber, in the sense that no carpenter would go to Lowe's or Home Depot to purchase a 2-by-7 piece of lumber because it's not a standard size. He said the same concept applies to steel when building the girders.

"Those plates come in standard sizes, and typically they would cut out the individual pieces to build the design. We're proposing that instead of doing all the cutting, you take that plate and put it into a press brake and bend it four times in different locations so it looks like a bathtub-shaped beam," Michaelson said. "Then you can pour concrete in it and ship the whole thing by truck."

The Short Span Steel Bridge Alliance (SSSBA) aims to keep bridge owners and designers informed about the benefits, latest design innovations, cost competitiveness and performance of steel in short-span installations up to 140 feet in length. Michaelson is part of the SSSBA's Bridge Technology Center, which is overseeing the Fourteen Mile Bridge project.

Michaelson and Barth have conducted extensive research on the press-brake-formed steel tub girder system for the past six years, including development and design, experimental testing, field evaluations, and feasibility and economic studies.

The focus of Michaelson and Barth's research the past few years has been trying to make short-span steel bridge design more economical and efficient. Of the nation's roughly 600,000 bridges, more than 90% are short-span bridges that are less than 150 feet long, he said.

Barth is entering his 22nd year at WVU.

"We envision the PBTG system as the future of short-span steel bridge design," Michaelson said. "West Virginia is the fifth state in the U.S. to implement this new system, along with Iowa, Ohio, Michigan and Texas. We commend the WVDOH for recognizing its potential and ORDERS Construction Co. for turning our dream into reality."

Even outside of the project, the pair are familiar with each other's work. For over a decade they've worked closely together on several research projects. This project, though, presented a new set of challenges for Michaelson and Barth, who worked around many site challenges dealing with elevation and angles along the road.

"The roadway profile had both skew and super elevation. One of the good takeaways from this whole process is that if the girder can work here, it can work anywhere," Barth said.

He explained that "skew" refers to when the abutments (or supports) are not at right angles. Super elevation occurs when the bridge is built in a curve shape.

The duo's research on this specific project began after being tasked with developing a solution for accelerated bridge construction.

Barth said this is the first time their work together has developed into something that will actually be put into use in West Virginia - a reward worth waiting for.

"This offers the people of West Virginia an economical bridge solution. It's nice to go from seeing concept to seeing something be made into something practical," he said.

"WVU and Marshall came together on this, and it was great that we produced something that is actually being used," Michaelson added. "As a researcher, you hope that your work has a direct impact. There are going to be folks driving over this every day, so there's a real benefit. I was born and raised in West Virginia. I've lived here all my life. Being able to give back is a pretty cool deal."

Michaelson previously worked on an award-winning short-span bridge in Muskingum County, Ohio. It was the first press brake tub girder structure to utilize the SPS Deck system, providing an all-steel solution that not only helped avoid a lengthy traffic closure but also was a shallow superstructure with a lack of horizontal surface, which was beneficial because of the structure's location over a stream that is prone to flooding. It earned a 2018 Technological Advancement Award from the National Steel Bridge Alliance.

A second PBTG bridge is expected to be constructed in District 4 (on U.S. 250 over Flat Run near Mannington, West Virginia) in 2020.