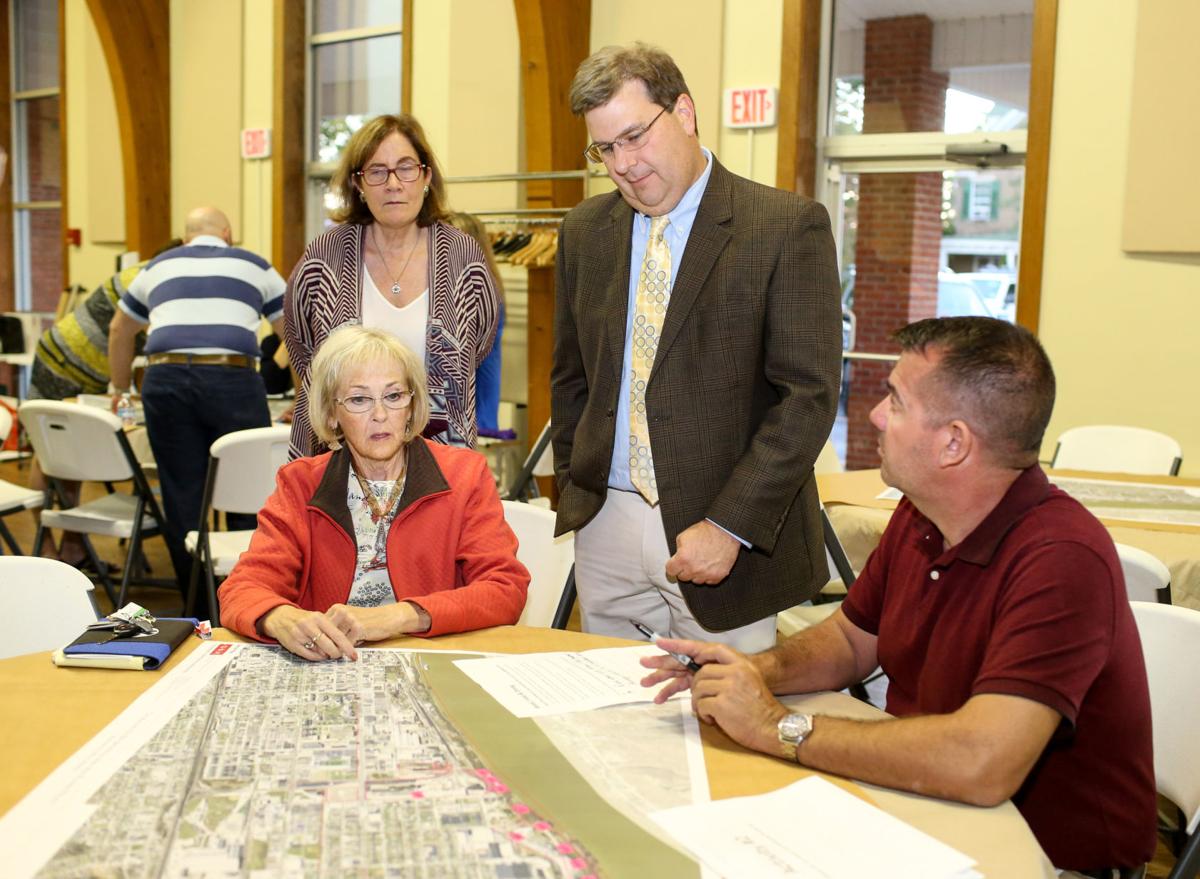 Stromberg, Garrigan and Associates Principal Sean Garrigan, center, talks with Marsha Wagers, left, and City Council Member Mark Bates about what they would like to see brownfield areas used for during an interactive workshop on Tuesday, Sept. 27, 2016, at the Community of Grace United Methodist Church in Huntington. 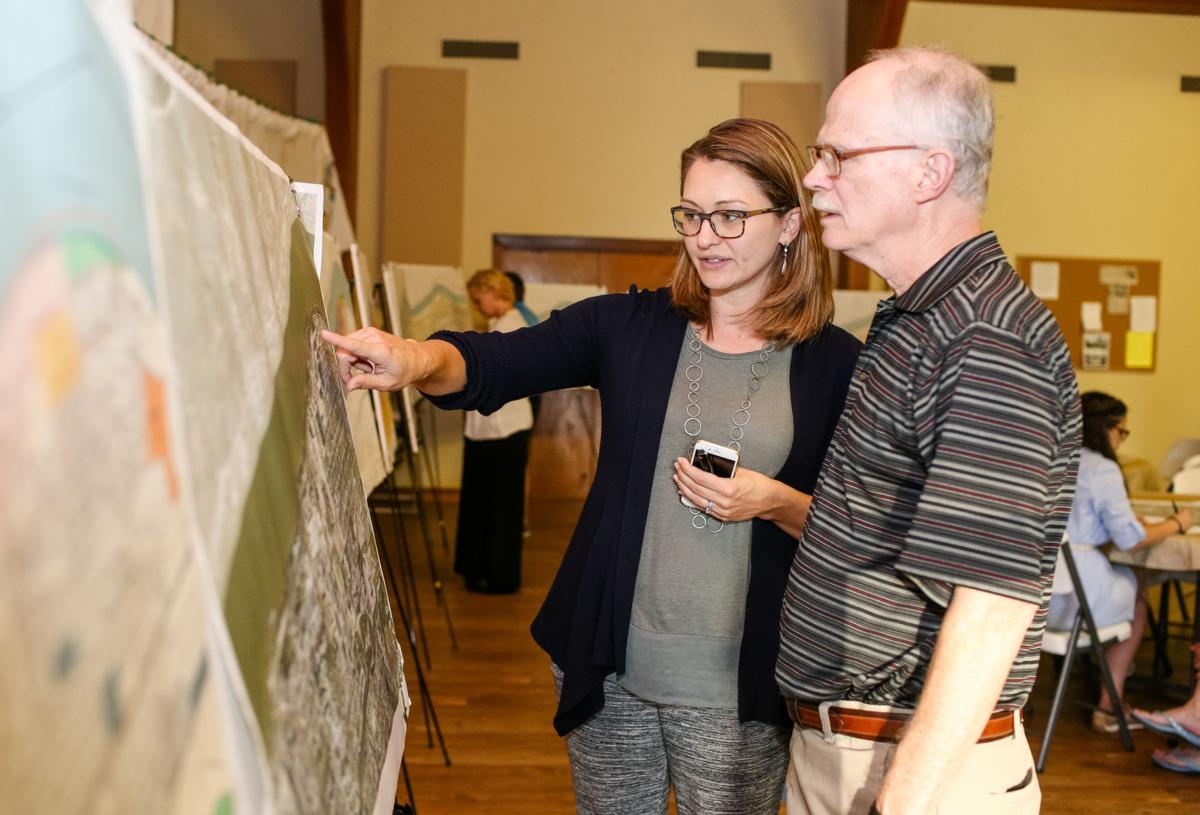 Phoebe Patton Randolph and Rev. Rick Wilson of Highlawn Presbyterian Church look over maps for a brownfields area-wide planning project during an interactive workshop to discuss how to utilize Huntington’s vacant industrial and brownfield areas on Tuesday, Sept. 27, 2016, at the Community of Grace United Methodist Church in Huntington.

Stromberg, Garrigan and Associates Principal Sean Garrigan, center, talks with Marsha Wagers, left, and City Council Member Mark Bates about what they would like to see brownfield areas used for during an interactive workshop on Tuesday, Sept. 27, 2016, at the Community of Grace United Methodist Church in Huntington.

Phoebe Patton Randolph and Rev. Rick Wilson of Highlawn Presbyterian Church look over maps for a brownfields area-wide planning project during an interactive workshop to discuss how to utilize Huntington’s vacant industrial and brownfield areas on Tuesday, Sept. 27, 2016, at the Community of Grace United Methodist Church in Huntington.

When she was growing up, Jeffords said Highlawn was viewed in a much more positive light than it is today.

In order to change that image, Jeffords and more than 30 others participated in an interactive public workshop Tuesday night at the Community of Grace United Methodist Church in Highlawn.

Led by the city of Huntington, Huntington Municipal Development Authority and the consulting firm of Stromberg, Garrigan and Associates, residents were asked how Huntington should address its vacant underutilized industrial and brownfields areas around the Highlawn neighborhood.

In the Highlawn area, Sean Garrigan, of Stromberg, Garrigan and Associates, a Pennsylvania consulting firm specializing in brownfield redevelopment plans, said there are three properties that have a legacy of use that would warrant the perception that they are brownfields.

A brownfield is a parcel of land devalued by the real or perceived presence of contamination.

The three properties include the former Ingram Barge, the McGinnis property and the ACF complex.

The Ingram Marine Group operated Ingram Barge, a barge terminal and coal dock facility, on the brownfield property along the Ohio River in Highlawn until 2009.

ACF, a manufacturer of railcars, railcar components and pressure vessels, is located near Marshall University on the north and south side of 3rd Avenue between 22nd and 24th streets. Part of the facility is still operational and has about 30 employees.

The McGinnis property, to the west of ACF and behind Dot Hicks Field, has served several purposes throughout the years, including as a toy warehouse, a pesticide reformulation facility and, most recently, as a metal recycling and salvage facility.

Using three federal brownfield planning and assessment grants totaling $600,000 from the U.S. EPA, Garrigan said the purpose of the workshop is to get public input on the best possible uses for the properties and the surrounding area.

"The intention of the program from the EPA's perspective is they want to know what the communities' concerns are first and foremost and how this project could potentially address community issues - whether it's health and safety or other ways to improve their community in any way possible," Garrigan said.

Jeffords said talk like this has been a long time coming.

"So much of the property is unused, and we need to do something with it," she said. "We don't capitalize enough on our riverfront."

During the workshop, residents huddled around circular tables with printouts of the city that showed the Highlawn neighborhood, brownfield properties and other landmarks like Marshall University and the hospitals.

Community members then went through a series of questions that asked them where they would like to see commercial business like retail and dining added, where would be ideal locations for parks and public spaces and where are some places that need transportation improvement or housing improvement.

Residents were asked to dream big and think of any and all improvements or additions they would like to see.

Donna, 68, and her husband, Ernie Childers, said they would like to see a ball field for the Marshall University baseball team. The Childerses were not alone in this thought, and several tables echoed this suggestion.

Dolores Scott, 43, said she would like a park close by that she could easily and safely walk to with her children.

"To see what we could actually do with some of this area that is filled with several old businesses, it's exciting," she said.

Participants also discussed how the development of the properties would bring jobs to the area.

"If we can bring more jobs, I think a lot of our problems with crime and drugs would straighten out," Scott said.

By bringing in more jobs, Jeffords said more people will want to live in the immediate area.

"When people hear 'Highlawn,' we want them to think, 'That would be a good place to live,'" she said.

Jeffords said the plan will also serve as a guide for future developers and businesses.

"It's all about coordinating everything," she said. "If someone wants to put in a business, they will be able to know what can go where and how it would complement the area."

Garrigan said the information gathered during Tuesday's meetings will be folded into a plan, which the company will evolve and then return to the community in January in order to vet and refine the concepts into a strategic plan with the hopes of completing the plan in February.

The aggressive timeline is in place due to the city's participation in the America's Best Communities competition. The brownfields redevelopment strategy for the Highlawn neighborhood is a component of the city's revitalization plan, also known as the Huntington Innovation Project (HIP), submitted to the America's Best Communities competition, of which Huntington is one of eight finalists.

As part of the redevelopment plan, the Huntington Municipal Development Authority is also in the process of gaining ownership of the three brownfield properties, likely on an interim basis, in order to clean up the properties for their desired use according to the area-wide plan, and then sell it to developers.