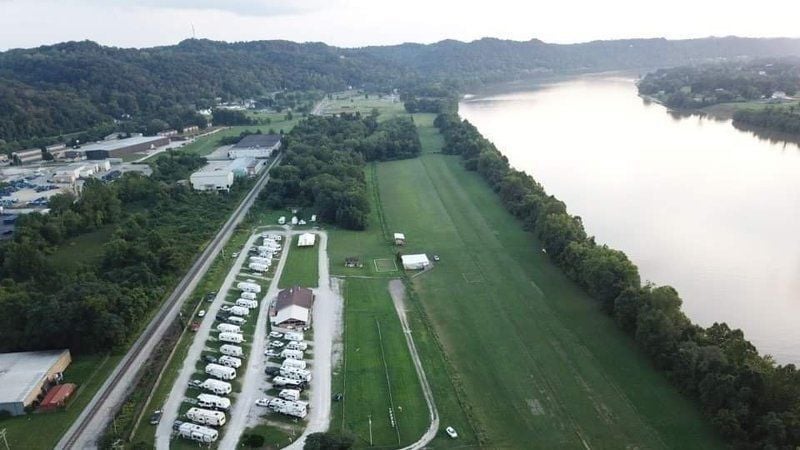 The Robert Newlon Airport is shown in this aerial file image. 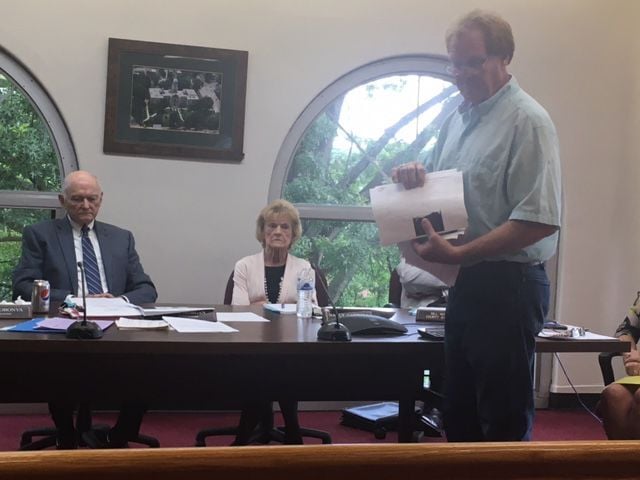 Carl Bailey, who manages the Robert Newlon Airport property near Lesage, presents documents to the Cabell County Commission during its regular meeting on Thursday, June 10, 2021, in Huntington.

The Robert Newlon Airport is shown in this aerial file image.

Carl Bailey, who manages the Robert Newlon Airport property near Lesage, presents documents to the Cabell County Commission during its regular meeting on Thursday, June 10, 2021, in Huntington.

The first resolution seeks to shut down two businesses on the property the commission says are operating illegally and without approval.

The resolution goes on to say Pier One Landing, which opened a week ago, illegally operates a paddleboard business without a sublease or approval and also presents a significant liability risk.

The second resolution says the 2017 sublease the Cabell County Airport Authority has with Robert Newlon Airport Inc. is illegal and invalid because it did not receive approval from the commission. It asks for the property, which is managed by Fly In Cafe owner Carl Bailey, to be surrendered to the county, including improvements.

Then it seeks to dissolve the authority and to terminate the lease the commission has with them involving the property.

Sobonya wanted to amend the first resolution to take out the new Pier One business. However, her motion died after no commissioner would second it.

The same thing happened to the second resolution. Sobonya wanted to amend the last paragraph that calls for the Airport Authority to be dissolved. This motion also died after not getting a second.

Bailey spoke at the meeting and said Pier One Landing has nothing to do with the airport.

“Pier One Landing has never been brought up before,” he said. “That business has absolutely nothing to do with that airport, so I am curious as to why you are doing this. … Why are you doing this?”

When he received no answer, he began to defend the skydiving operations. Bailey said skydiving has been taking place on the property for years and there have been no accidents or injuries.

“Regulations say prior approval has to be obtained from the airport’s management, which is me, to conduct parachute operations over the airport,” he said. “Absolutely, you have the right to skydive here.”

Bailey also cited other examples of events taking place on public property that could create a liability risk to the county.

“Why doesn’t litigation start against the 4-H Camp out here?” he asked. “They get on the Guyandotte River and go kayaking. These kids are out here using our taxpayers’ dollars and there is a risk there, too.”

He cited other examples such as BASE jumping on Bridge Day at the New River Gorge, public pools, playground equipment on county property at the Ohio River and bicycle riding in town.

“Are we going to stop bicycle riding because someone might get hurt on a county road and sue the county?” he asked. “Why don’t we just do away with Camden Park, whitewater rafting in the state of West Virginia because users accept risks there every day?”

Bailey cited the county selling property for far less than its appraised value, other agencies that have expanded or built on public property and other liability risks for the county.

Chad Nelson, county administrator for grants planning and permits, later clarified that property was auctioned off for $5,000 more than the minimum bid.

Sobonya suggested Bailey turn to the 7,000 people who signed a petition he previously presented to the commission.

“For at least six months, we have said individually that what you are doing could be considered an attraction,” Morgan said. “You are operating it on a piece of property for which you pay no property taxes, minimal rent … no cash … insurance that you carry we don’t feel is adequate to protect the citizens of Cabell County from lawsuits. The businesses you have started, you have not had approval from the Cabell County Airport Authority, who would have had to gotten it from the commission, so those businesses are operating on county property without authority, and the latest one connects the airport to Pier One. There was no prior approval of that given, and at this point the county wants to be out of the airport business. We have, in my opinion, made every reasonable effort to allow you to buy that to protect your interests and the $800,000 you indicate you have over a period of time put into that … the property itself is appraised at $270,000 and is assessed at $160,000. We arrived at a figure of $200,000, which is what it cost the county.”

Bailey said it wasn’t about the money.

“I shouldn’t have to give you $200,000,” he said. “I have a lease with you and you should be honorable people. You should own up to what your predecessors have done.”

Bailey publicly made another offer of $161,700, but the commission did not comment on it or take any action.

David Clark, president of the Airport Authority, said the litigation resolutions are equivalent to the county taking action against itself.

“The County Commission is going to sue themselves and the Airport Authority, which by statute is a part of the Cabell County Commission,” Clark said. “The leases were drawn by the county attorney, Bill Watson. They were approved by the former Cabell County Commission. We are 15 years into a 30-year lease and have had no problems … so the fact you are taking taxpayers’ money to sue yourself doesn’t make any sense to me.”