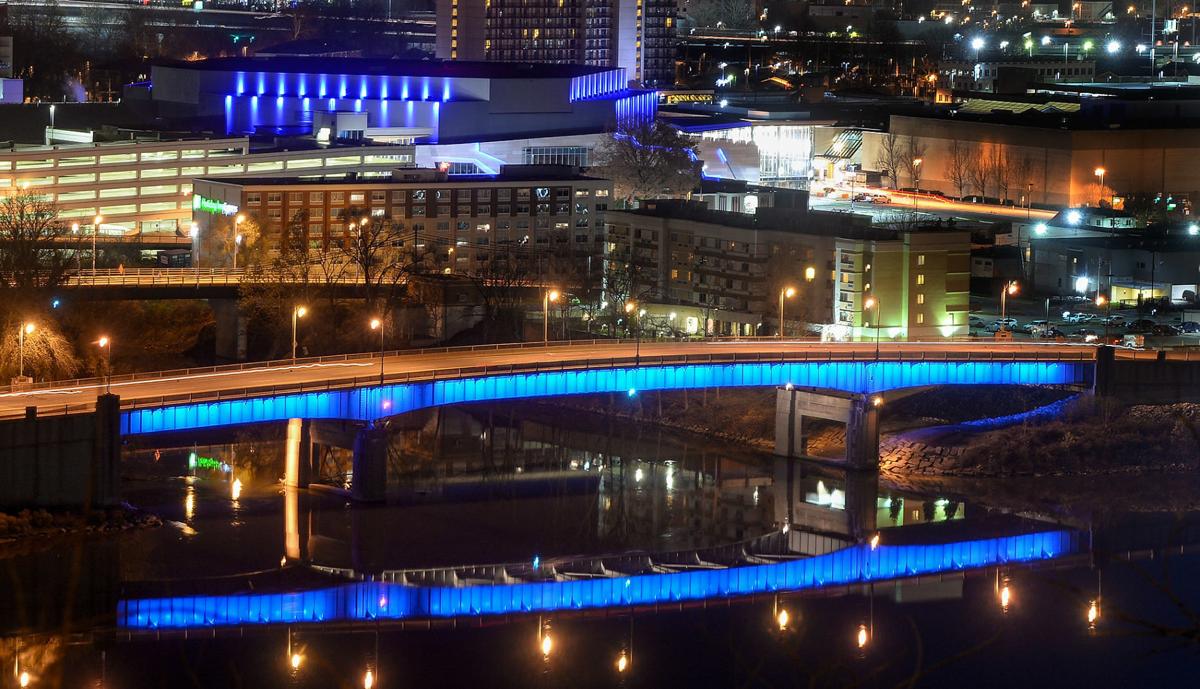 Blue light from the Kanawha Boulevard bridge over the Elk River is reflected in the Kanawha River and the lights on the Charleston Coliseum & Convention Center are lit in blue Thursday evening in honor of Charleston Patrolman Cassie Johnson, who died Thursday after being shot Tuesday while responding to a parking complaint on Garrison Avenue. 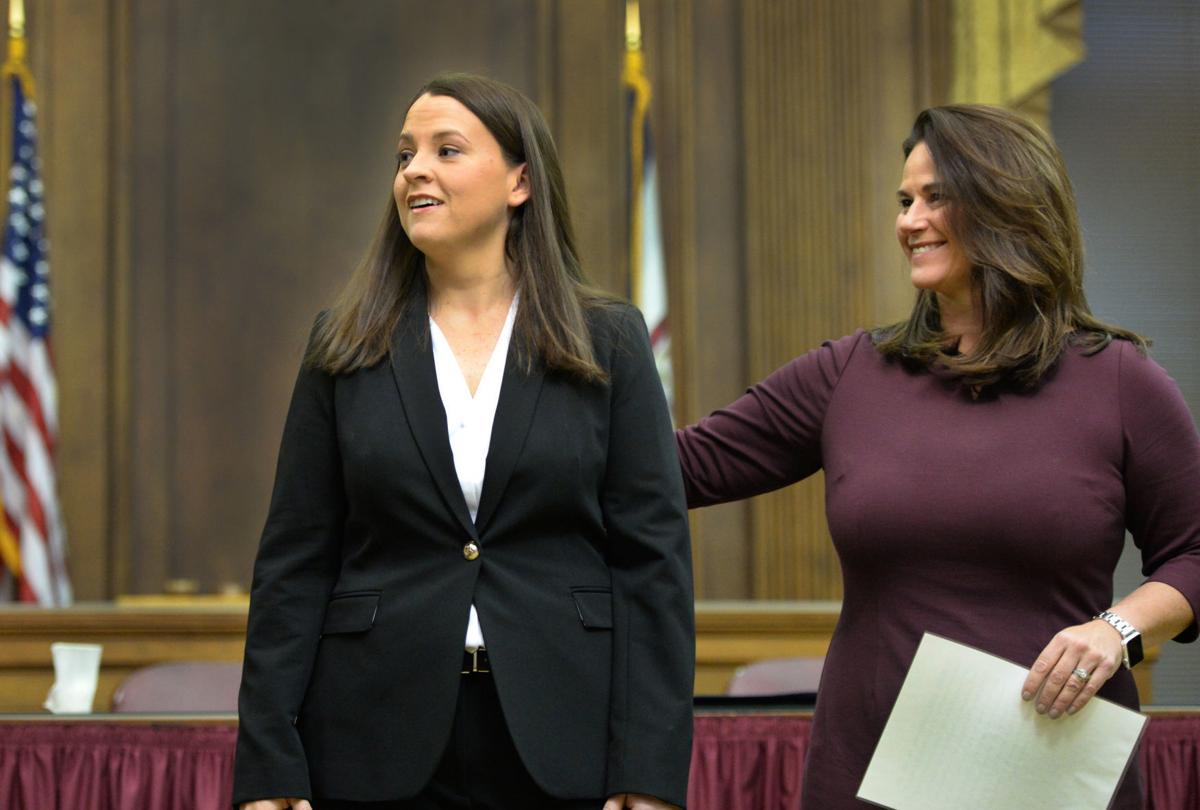 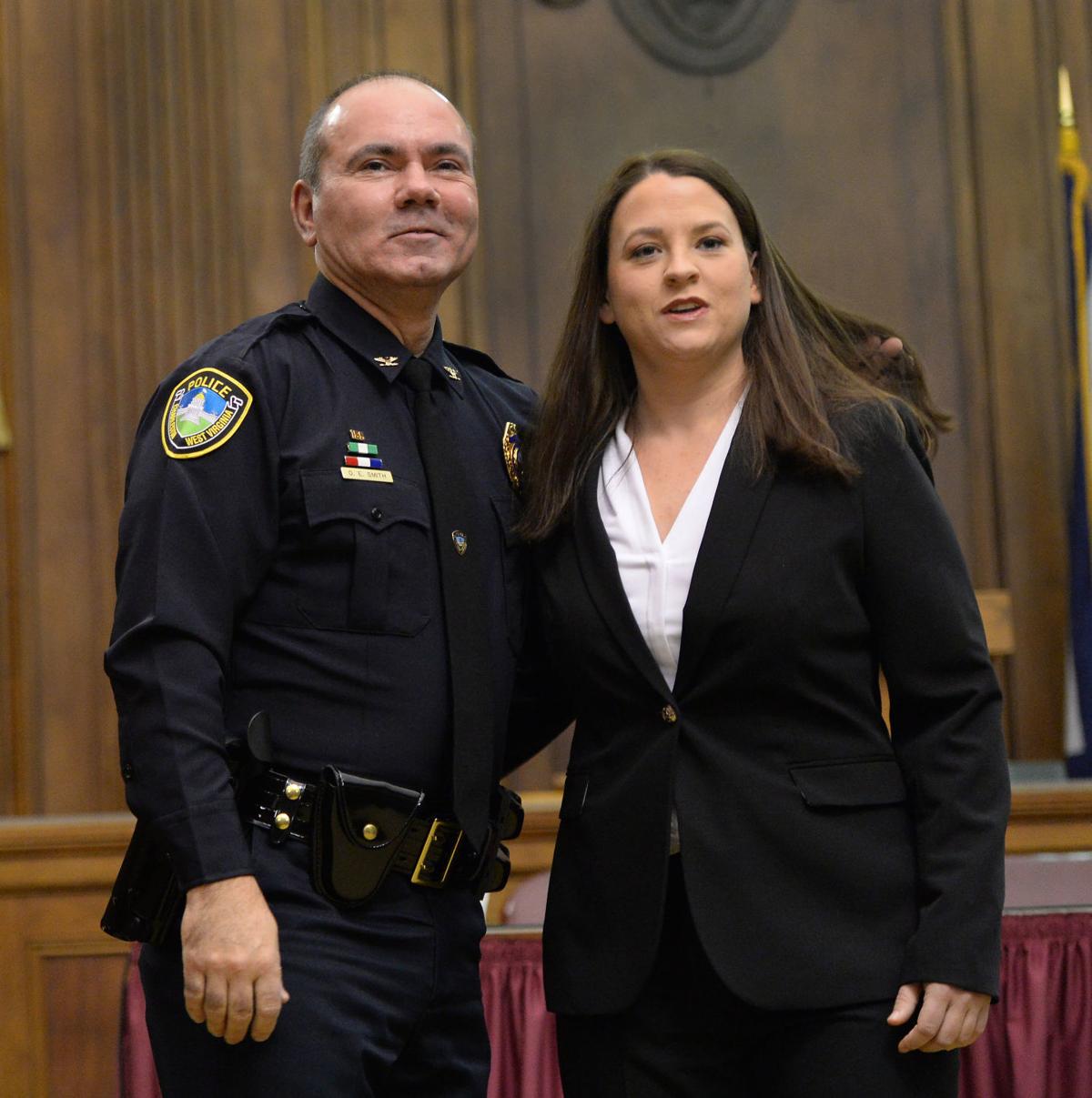 Former Charleston Police Chief Opie Smith (left) stands with Cassie Johnson on Jan. 11, 2019, the day she was sworn in to become a Charleston police officer.

Blue light from the Kanawha Boulevard bridge over the Elk River is reflected in the Kanawha River and the lights on the Charleston Coliseum & Convention Center are lit in blue Thursday evening in honor of Charleston Patrolman Cassie Johnson, who died Thursday after being shot Tuesday while responding to a parking complaint on Garrison Avenue.

Former Charleston Police Chief Opie Smith (left) stands with Cassie Johnson on Jan. 11, 2019, the day she was sworn in to become a Charleston police officer.

Hunt said Johnson will have a hero’s funeral service at the Charleston Coliseum & Convention Center, with a date and time being announced at a later date. Mayor Amy Shuler Goodwin ordered all city flags to immediately start flying at half-staff until funeral services are finished.

“To say we are heartbroken is an understatement,” Goodwin said. “We are at a loss because we have lost one of our sisters in blue.”

Johnson was responding to a parking complaint just before 3 p.m. Tuesday on Garrison Avenue, and was shot in the face by a resident following a confrontation, law enforcement officials said following the incident.

Kanawha County Sheriff Mike Rutherford said Wednesday details on the investigation will remain limited as the sheriff’s office works to finish processing witness statements and evidence collection. Investigators will then turn information over to the Charleston Police Department and the Kanawha Prosecuting Attorney’s Office to determine what charges the suspect, Joshua Phillips, 34, will face.

But a few additional details into the investigation came Thursday.

Phillips allegedly parked his red Dodge Durango in a driveway that wasn’t his on Garrison Avenue, which prompted the call to police, sheriff’s office spokesman Sgt. Brian Humphreys said by phone Thursday. Phillips, who was alone, then entered into a residence across the street from where he parked.

Phillips later exited the residence alone, Humphreys said. A discussion between Johnson and Phillips beside his vehicle followed, which allegedly led to a confrontation.

Phillips allegedly used his own firearm to shoot Johnson, striking her once in the face. Johnson shot Phillips, striking him twice in the torso.

Phillips, of Charleston, was out of jail on bond after being charged with driving on a revoked license DUI in January, according to court records. Additionally, a 2019 charge for brandishing a firearm was dropped against Phillips in July after the alleged victim did not show up in court.

Johnson was hospitalized at CAMC General for nearly 48 hours following the shooting. Hunt said Wednesday evening she would not survive the gunshot wound. She was taken off life support but stayed alive while donorship for her organs was determined.

Hundreds of residents gathered at Laidley Field on Wednesday night for a candlelight vigil to honor Johnson, a Charleston native and Capital High School alumna. She was sworn into the Charleston Police Department in January 2019 after joining the city as a humane officer in October 2017.

Hunt ordered the department to retire Johnson’s unit number — 146 — on the roster on Thursday, according to the city.

“The Charleston Police Department roster will forever reflect ‘In Memory — Cassie Johnson’ beside the now retired unit number,” Hunt said in a news release. “You may see a pin showing the numbers 1-4-6 affixed to uniforms of your Charleston police officers, or other memorabilia with ‘146’ on it. This is our way of honoring the heroic acts of our fallen sister, Patrolman Cassie Johnson, as she gave her life while serving her home city.”

Hunt thanked the community for attending the vigil and for the outpouring support for the department.

“I want to thank everyone for their show of support for Patrolman Cassie Johnson, her mother, Sheryl Johnson, and the rest of the Johnson family. The display of pictures and signs throughout our city is truly moving,” Hunt said.

“She was a devoted daughter, sister, a loyal friend and a lover of animals. She had three dogs. She was formerly a humane officer as well in our community,” Capito said. “And boy did she have a bright future ahead of her.”

A GoFundMe account for Johnson raised more than $28,000 as of Thursday evening, exceeding its goal in less than 24 hours with more than 600 people having donated.