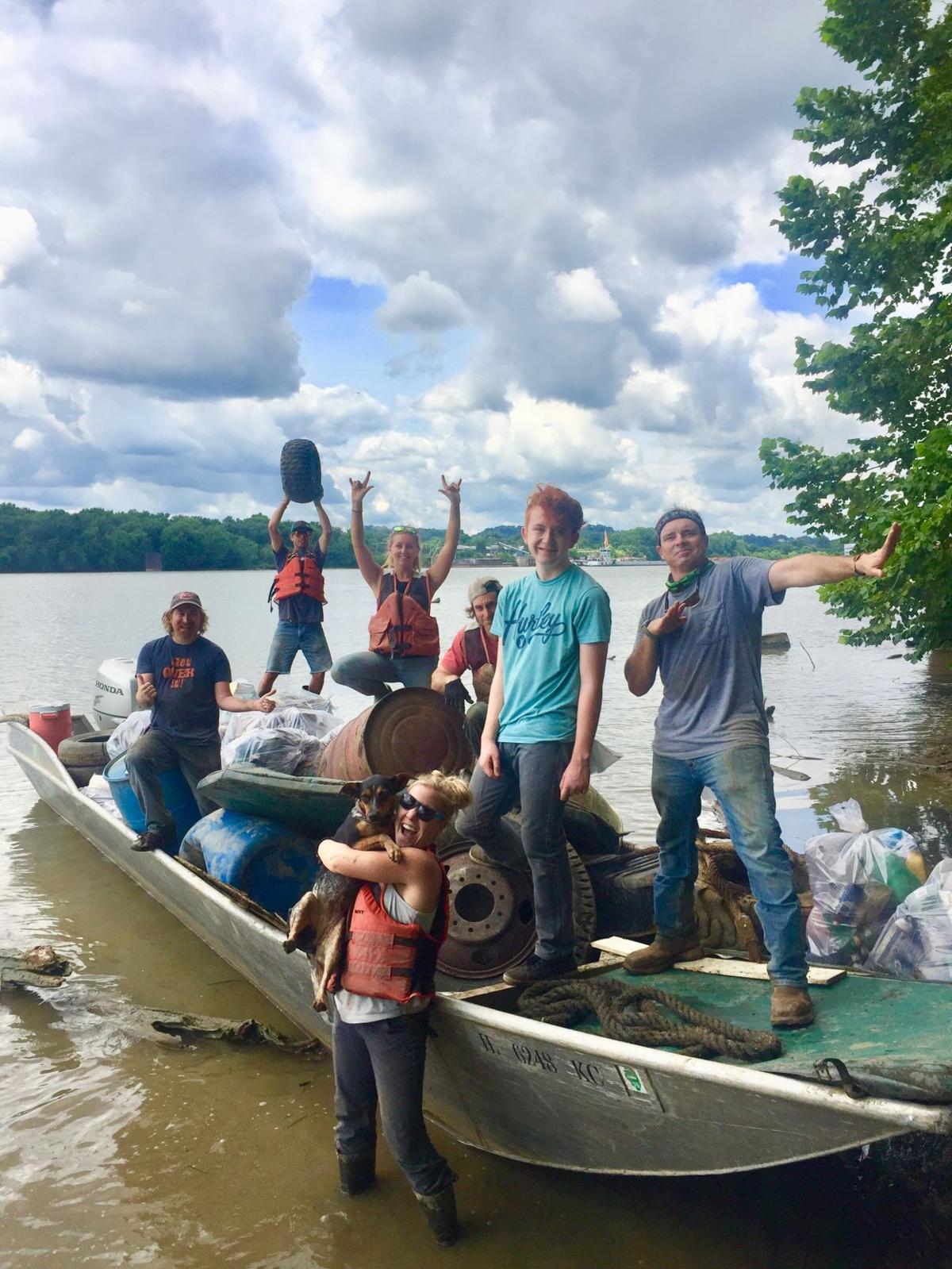 Dave Lavender/The Herald-Dispatch Volunteers help clean up the Ohio River in South Point, Ohio, with nonprofit group Living Lands & Waters on Saturday, July 28, 2018. The group was started by Chad Pregracke, far right. CNN's Hero of the Year for 2013, Pregracke's group has cleaned more than 10 million pounds of trash off of America's rivers since he started his work in 1998. 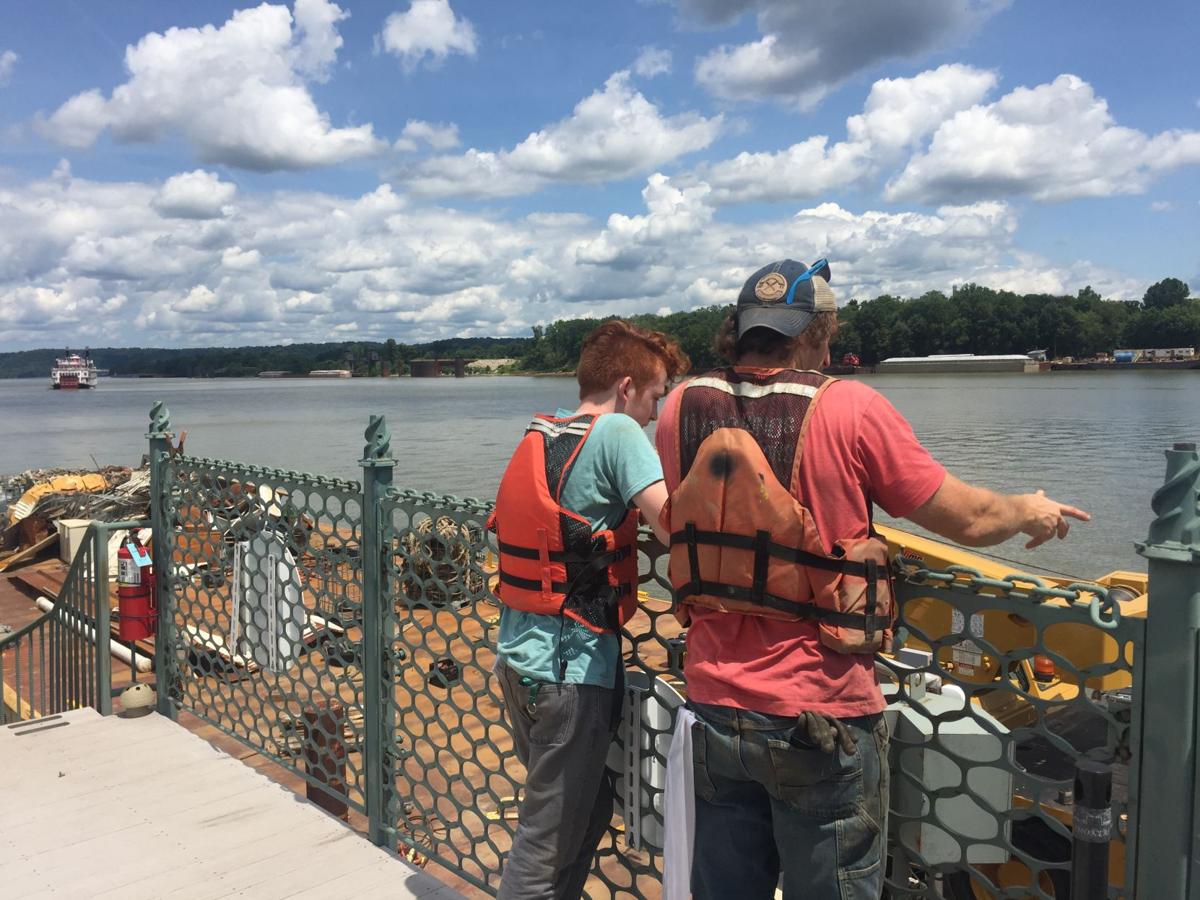 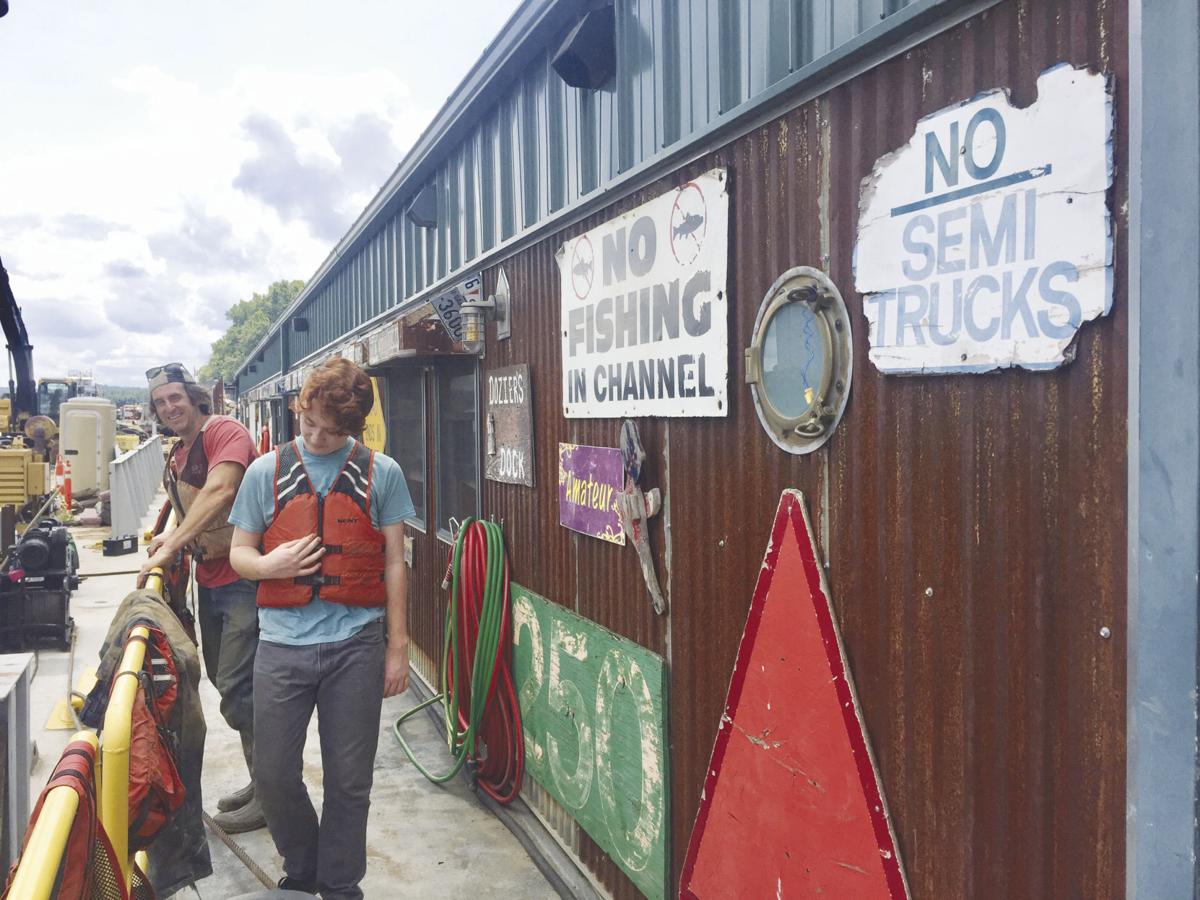 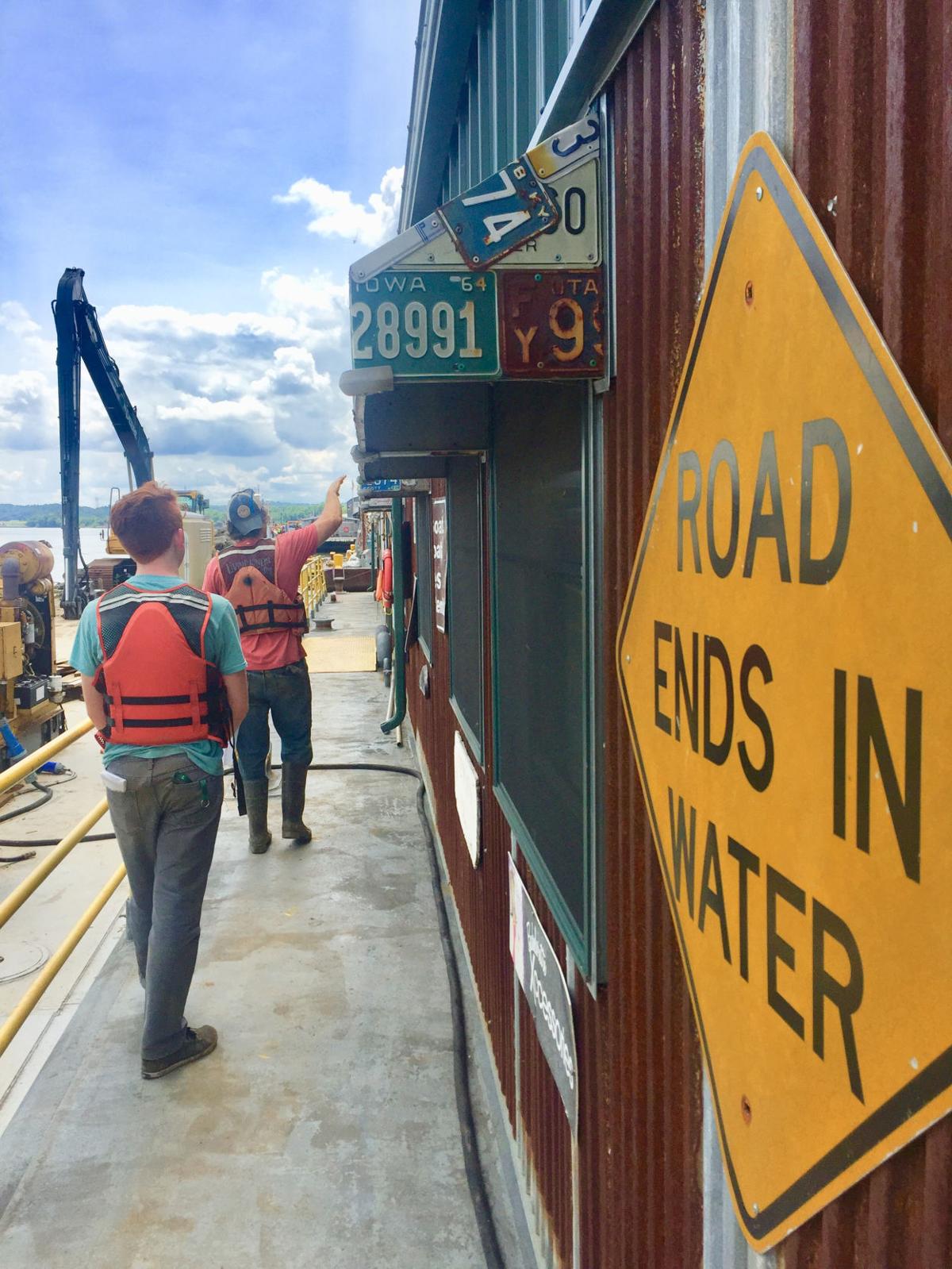 Dave Lavender/The Herald-Dispatch Volunteers help clean up the Ohio River in South Point, Ohio, with nonprofit group Living Lands & Waters on Saturday, July 28, 2018. The group was started by Chad Pregracke, far right. CNN's Hero of the Year for 2013, Pregracke's group has cleaned more than 10 million pounds of trash off of America's rivers since he started his work in 1998.

SOUTH POINT, Ohio — It's a postcard perfect Saturday, and Mike Coyne-Logan is out on the Ohio River, all smiles as his 30-foot jon boat's 135-horsepower Honda outboard motor rooster-tails wake under blue, cotton cloud skies.

While kids fish on the bank and a pontoon bobs up and down in the distance, Coyne-Logan is not out here on a pleasure cruise — he has work to do.

He cuts the motor, and the extra long jon boat glides up onto a muddy bank that looks like a garbage-filled riverside den of Oscar the Grouch.

Looking determined, Coyne-Logan, some of his 10 crewmates aboard the Living Lands and Waters, their dogs and a couple volunteers hop out, grab rolls of trash bags and get to work.

For the past 11 years, Coyne-Logan, who has degrees in history and teaching from Northern Illinois University, has joined founder Chad Pregracke on Pregracke's life mission: Living Lands & Waters, a nonprofit that he and others have grown from a one-man mission in 1998 on a houseboat into the only "industrial strength" river cleanup organization like it in the world.

Headquartered in East Moline, Illinois, Living Lands & Waters has a team of 10 who spend up to nine months a year living and traveling on a unique multipurpose series of barges, where the crew carries out its mission of hosting river cleanups, watershed conservation initiatives, workshops, tree plantings and other key conservation efforts.

Pregracke, who grew up on the Illinois and Mississippi rivers working summer breaks as a commercial shell diver for the cultured pearl industry as well as a commercial fisherman and barge hand, started cleaning up the rivers because there was so much toxic trash that nobody seemed to care about.

All collected, sorted and much of it recycled on the Living Lands & Waters impressive fleet, which now includes five barges, two towboats, six 30-foot-long workboats, two skid steers, an excavator, five work trucks, a crane and a large box truck.

For his collective efforts with LLW, Pregracke was named a recipient of the Jefferson Award for Public Service, America's version of the Nobel Prize, in June 2002. He accepted this award in the United States Supreme Court in Washington, D.C., with other award recipients: Rudolph Giuliani, Bill and Melinda Gates and Lilly Tartikoff. In 2013, Pregracke, who told his story in the book "From the Bottom Up: One Man's Crusade to Clean America's Rivers," was named CNN Hero of the Year.

Other than Pregracke's wife, Tammy, and one of the first helpers, Yam, who is now part-time after having kids, Coyne-Logan is one of the barge elders on a veteran crew — most of which have more than three years experience plying the rivers, organizing, cleaning, sorting and educating.

Six years ago, Pregracke began building out new living quarters made up mostly of re-purposed, sustainable and recycled wood, scrap metal from farms and adorned with license plates from all 50 states, and a bunch of signs they've found along the way.

"I think it has gotten better, too," Coyne-Logan said. "It's a nonprofit, but we get a living wage, and we rotate. Our old barge only held 13 gallons of potable water," Coyne-Logan said. "You ran out of water really fast. And that is one of those things you take for granted. It is nice to take a shower, and this has central air. We've had this for six years. A lot of it is Chad's vision."

Aboard the 150-foot-by-35-foot house barge, whose power for the living quarters is run by solar panels on the roof, there's living quarters for the crew, a spacious galley, an upper deck, bathrooms, two offices, seven bedrooms, a basement for storage and a 31,000-gallon water tank.

In the back, there is a classroom. Since 2011, they have hosted 382 educational events and more than 11,000 educators and students aboard the barge.

The classroom has a collage of photos of all the students who've been on the boat as well as a wall filled with a wild collection of some of the toys they have found in America's inland rivers.

Just a few years ago, LLW would do educational components on land, but everyone wanted to see their funky barge, and so they built one big enough to hold a classroom as well.

"We host environmental science workshops in our classroom. We tell them when they first get in there that they are going to be up on the wall forever, and I think that makes them feel really special," said Meghan Elgan, educational coordinator. "We need more walls now. We have eight classes for the teachers to choose from including a river cleanup, which is service learning. All of our classes are aligned to next-generation science standards, which makes it easy for teachers to approve it with their principals. It is also free, and we do offer reimbursement of up to $400 for them to come out, so that makes my job very easy. It is really fun. We do have some availability in Wheelersburg and Portsmouth."

LLW is signing up high school students to participate in workshops Aug. 21-24 and 28-30 in Wheelersburg and Sept. 5, 7 and 10-12 in Portsmouth. Email Elgan at Meghan@livinglandsandwaters.org.

Both Elgan and Coyne-Logan feel like a trip aboard the barge can have a great impact on youth.

"You can keep the river clean, but you need to educate people on why it is important make it sustainable and to nip bad habits in the bud," Elgan said.

"I think it carries more weight, too, when they come out here they can see, 'Oh these guys are actually doing this - it is not made up,' " Coyne-Logan said.

"It's also a great example of how one person can make a difference, and we focus on that in workshops immensely because Chad started this by himself and now we are closing in on 10 million pounds, so we hope that inspires people to follow their dreams not just doing river cleanup or environmental work but anything that they want to do."

Visiting and helping the LLW crew can have a transformative impact.

Leah Cafarelli, from Salem, Massachusetts, was in college when she twice took an Alternative Spring Break to come out and help with the efforts.

After graduation, she took a job with a marketing firm in the city, but kept thinking about LLW and re-joined them last June. She does marketing as well as program coordination during the Ohio River Tour.

"The people are just so cool - the crew and everyone was just so fun to work with — and it made cleaning up just a wonderful experience," Cafarelli said. "I was working with a marketing firm in an office, and I was like, 'I don't know if I want to do that right now,' so I took the opportunity while I was fresh out of college to move away from home and just do something different."

Now it its third Ohio River tour that will go until October, LLW was scheduled to come up only as far as Ironton, Wheelersburg and Portsmouth. However, some needed boat repairs brought them further upstream to South Point, which is home to McGinnis Inc.'s Sheridan Shipyards, an inland river barge maintenance and production facility.

LLW's Ohio River Tour had to make a schedule change due to its towboat breaking down. While repairs are being done in South Point for a couple of weeks, the crew decided to make the most of the stop.

Those who want to volunteer should register for the cleanups at LivingLandsAndWaters.org. All necessary materials are provided. Certain clothing is required to participate in the cleanups and can be found on the website.

The volunteer cleanups are divided into two sessions per day, one in the morning from 9:30 a.m. to 12:30 p.m., and an afternoon session from 1:30 to 4 p.m. The morning volunteers may opt in to lunch provided by LLW after the cleanup.

Did you, or do you plan to, take advantage of your state’s sales tax holiday?