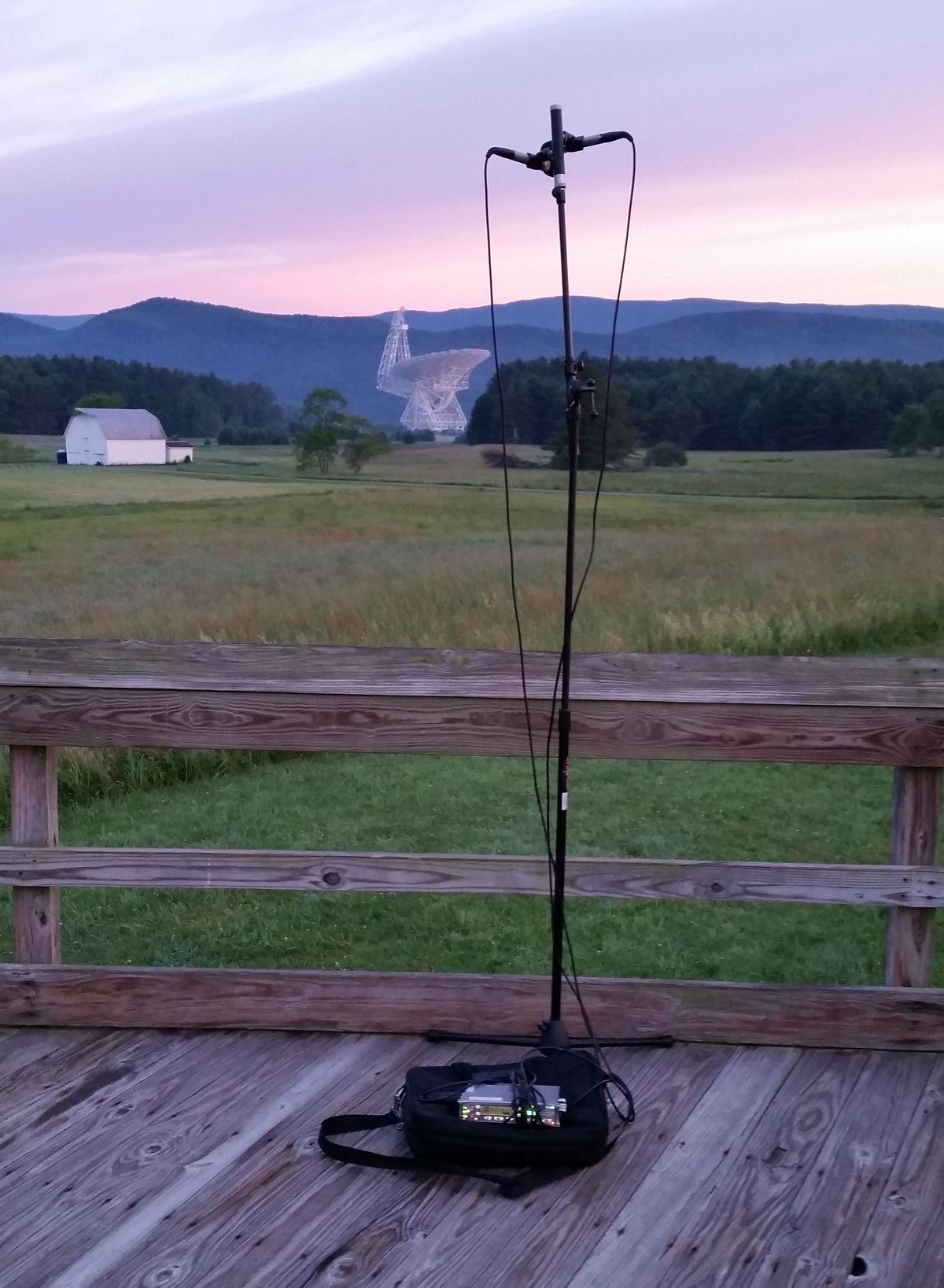 Eichenbaum recorded the sounds of peeping frogs and birds from an observation deck in a meadow outside the Jansky Laboratory building at Green Bank Observatory. The observatory’s iconic Green Bank Telescope can be seen in the background. 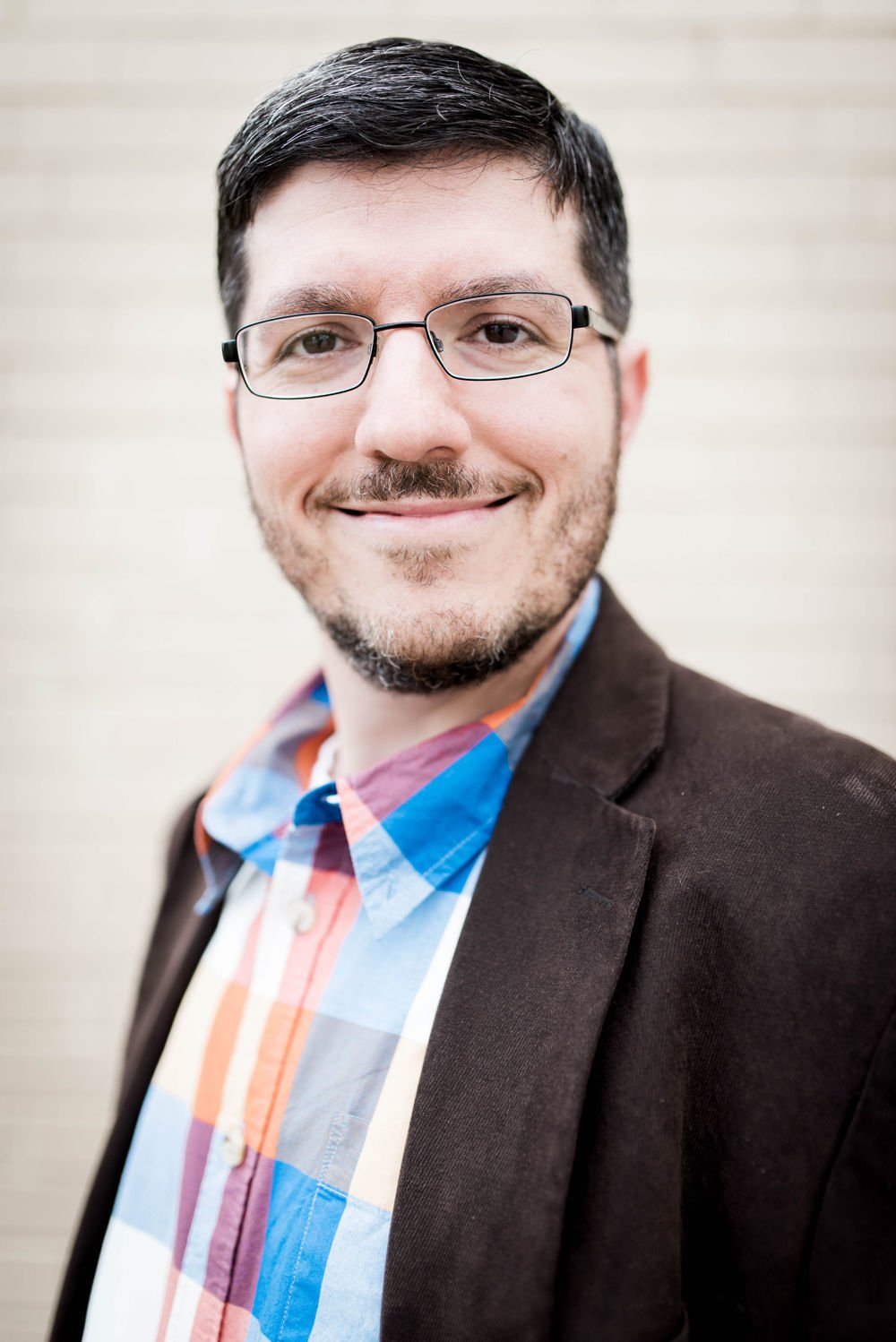 Fairmont State music professor and composer Daniel Eichenbaum combined sounds of machinery and nature recorded at the Green Bank Observatory with a piano solo inspired his impressions of the observatory and its staff to create “Green Bank,” an 11-minute musical composition that debuted in November.

As a source of inspiration for musical composition, the Green Bank Observatory is both down to earth and out of this world.

That’s what Fairmont State University Assistant Professor of Music Dan Eichenbaum discovered in June, while spending time at the world renowned Pocahontas County research center. There, he collected sound samples ranging from the gurgling of HVAC pumps and the computer enhanced tones of a newly detected pulsar signal to the soothing, nocturnal chirping of peeping frogs and a dawn chorus of songbirds.

“At Green Bank, you have people working with radio telescopes and high-tech machinery, involved in things like pulsar research, while surrounded by a vast expanse of woods and wildlife,” Eichenbaum said. “It covers quite a sound environment.”

The snippets of sounds Eichenbaum collected during his stay at the observatory were later edited and arranged in his Fairmont State studio to accompany a piano piece he wrote, inspired in part by his time at the observatory and his conversations with its staff.

The piece can be heard at soundcloud.com/daniel-eichenbaum/green-bank.

Observatory sounds that can be heard in the piece include a portion of a clanky elevator ride up the Robert C. Byrd Green Bank Telescope, the world’s largest fully steerable telescope, the closing of an elevator door, and the sound of a key striking the surface of the telescope’s metal receiving surface.

“The chirping and squawking sounds made by special coolant pumps that keep the telescope’s receiving gear extra cold” to enhance accuracy “seemed like a combination of bird and mechanical sounds,” Eichenbaum said.

In addition to recording mechanical and electronic sounds, “I set up microphones in the meadow outside the Jansky Laboratory to capture the sounds of peeping frogs at night and birds in the morning.”

Also making the cut were a series of multi-pitched hums and rumbles from the observatory’s HVAC system emitted throughout the day.

“There were so may cool sounds to record,” Eichenbaum said. “I recorded as much of the entire sound environment as I could. I had never been at one location gathering sound for such an extended period. My old composition teacher used to call these experiences fishing expeditions — you gather as much interesting sounding raw material as you can and worry about what will become of it later.”

The Fairmont State professor chose the Green Bank Observatory as the sound- and idea-gathering site for the project out of a desire to create a composition inspired by both West Virginia — his home for the past nine years — and astronomy, a topic that has fascinated him for years.

“I have a long history working with projects relating to astronomy and space,” he said.

In Kansas City, where he earned his doctor of musical arts degree in composition at the University of Missouri-Kansas City Conservatory of Music and Dance, he composed music and performed with the electro-acoustic music group Dark Matter.

“We performed in a planetarium with a 60-foot dome,” he said. The music was accompanied by a stream of space images programmed into the planetarium’s digital projector.

In spring, when he was commissioned to compose a new work for live pianist backed with pre-recorded sounds, he consulted with Fairmont State faculty involved with research projects at Green Bank, and learned whom to speak with at the observatory about a possible music research project there.

“The people at the observatory loved the idea,” Eichenbaum said. From the day he arrived at Green Bank with a car full of recording gear until he left more than three days later with hours of raw audio files, the staff was accommodating and encouraging, he said.

“They took me into equipment rooms, the control center for Green Bank Telescope as observations were being made, and up on the GBT itself,” he said. “They really made me feel welcome.”

At the observatory’s 100-foot dish, used primarily for pulsar research, Frank Ghigo, director of telescope users’ support, helped Eichenbaum convert raw radio wave returns from a pulsar signal into a frequency range that could be translated into sounds when processed through a software program.

In addition to recording the observatory’s mechanical and electronic sounds and capturing tones from the forests and fields surrounding it, Eichenbaum recorded interviews with Green Bank staffers. From them, he learned about their work and what it is like to live in one of the few places in America where Wi-Fi and cellphones are not a key part of modern culture, thanks to its location in the heart of the National Radio Quiet Zone.

Eichenbaum stayed in the dormitory where the observatory houses visiting researchers, and when not recording sounds or interviews, did a lot of hiking, he said.

While he was familiar with the observatory’s work, he had not visited Green Bank prior to his June recording session. But he plans to accept an invitation to return to the GBO next spring, when he tentatively plans to present a performance of “Green Bank” in the observatory’s 150-seat auditorium.