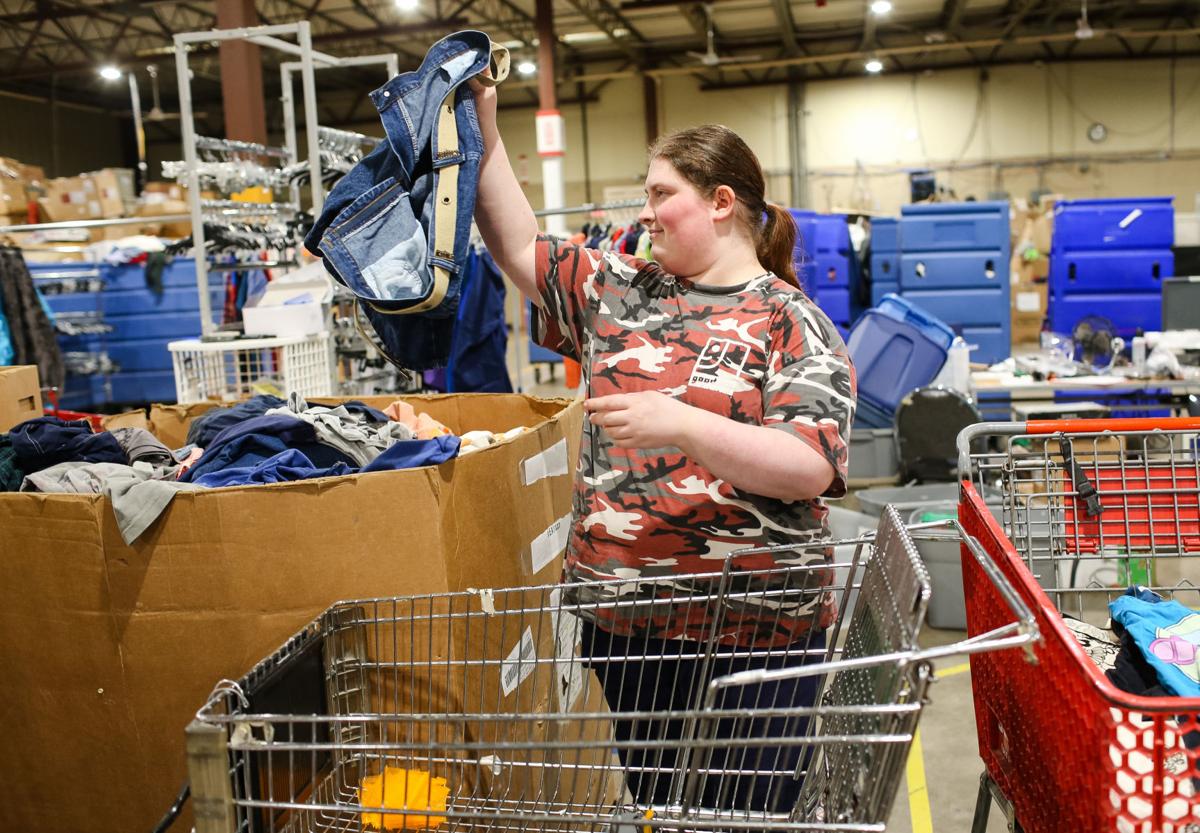 Sholten Singer/The Herald-Dispatch Amber Blankenship works to sort donations in the processing area of Goodwill on Wednesday, Dec. 20, 2017, in Huntington. 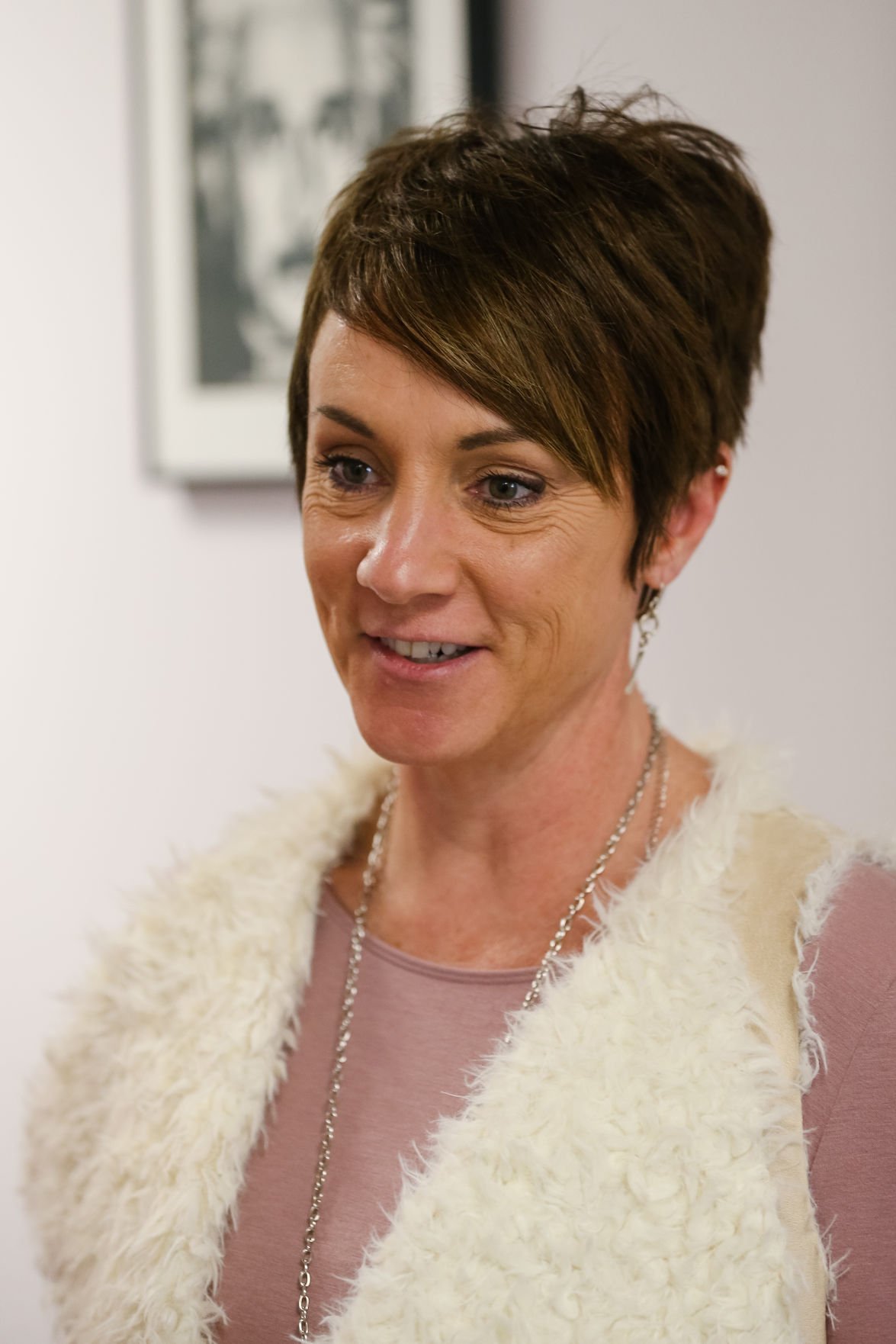 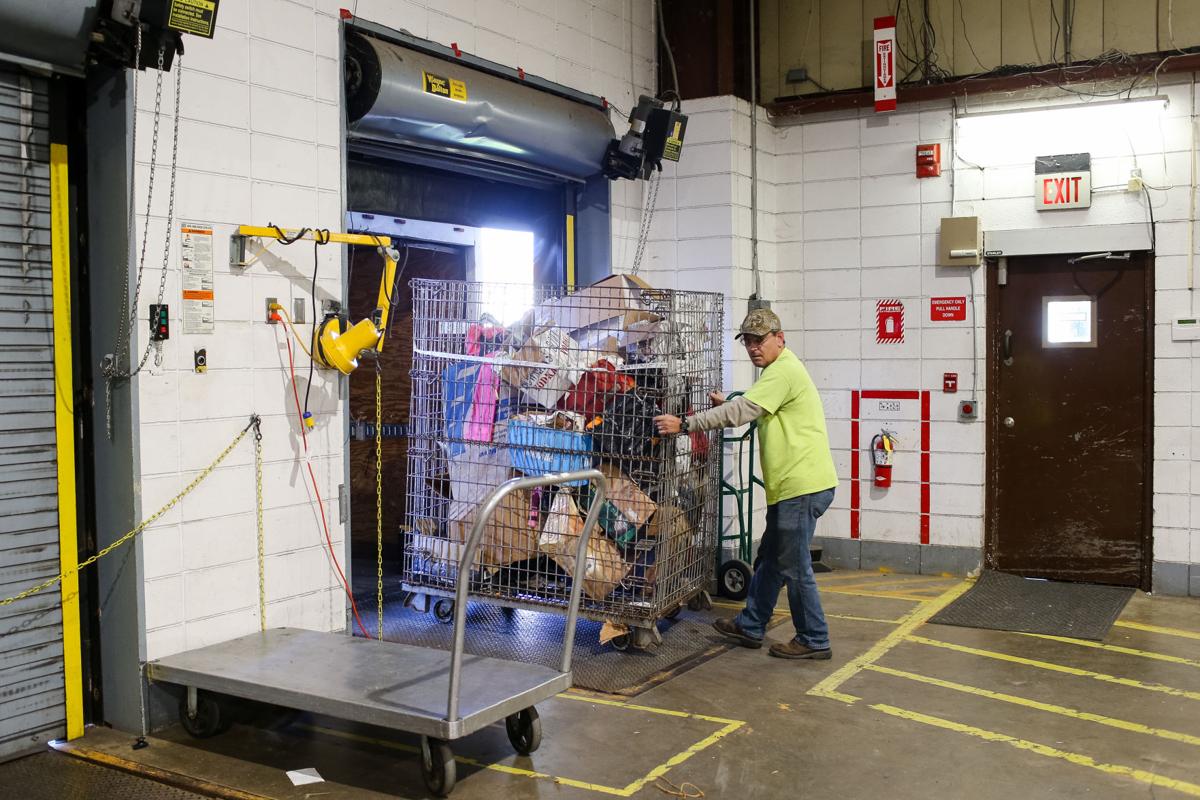 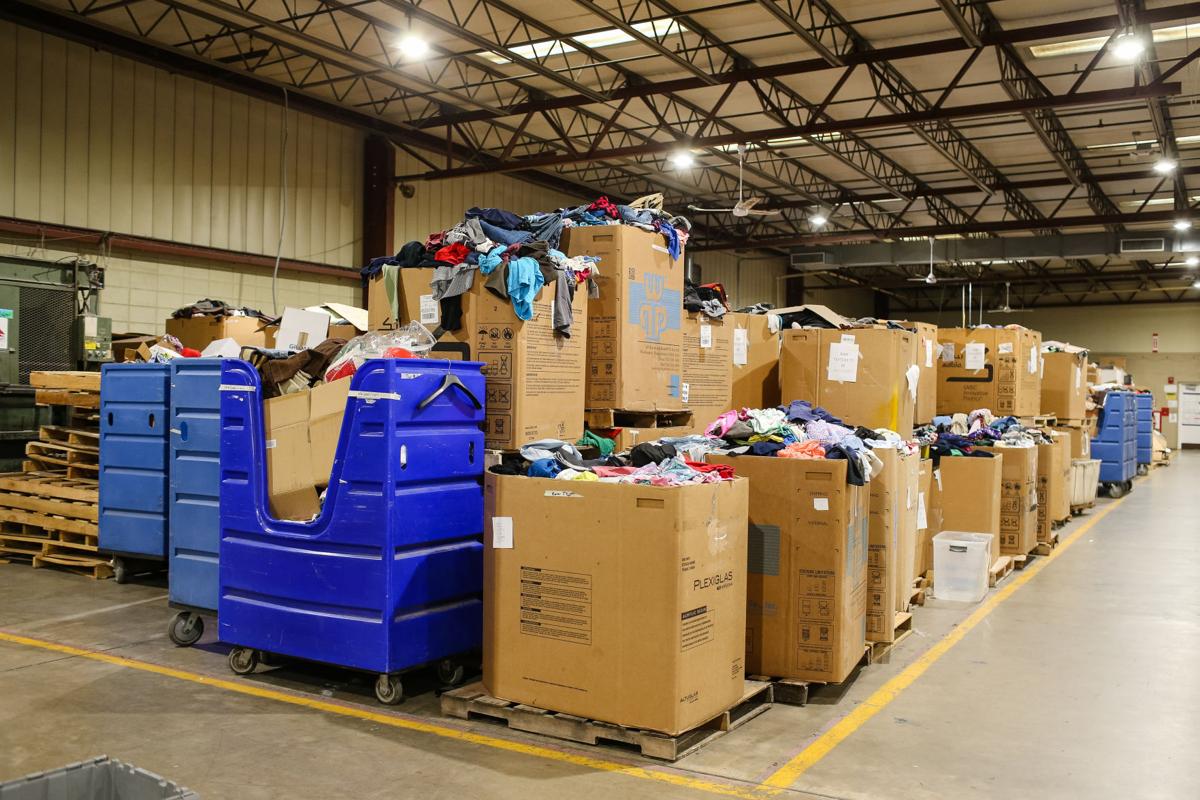 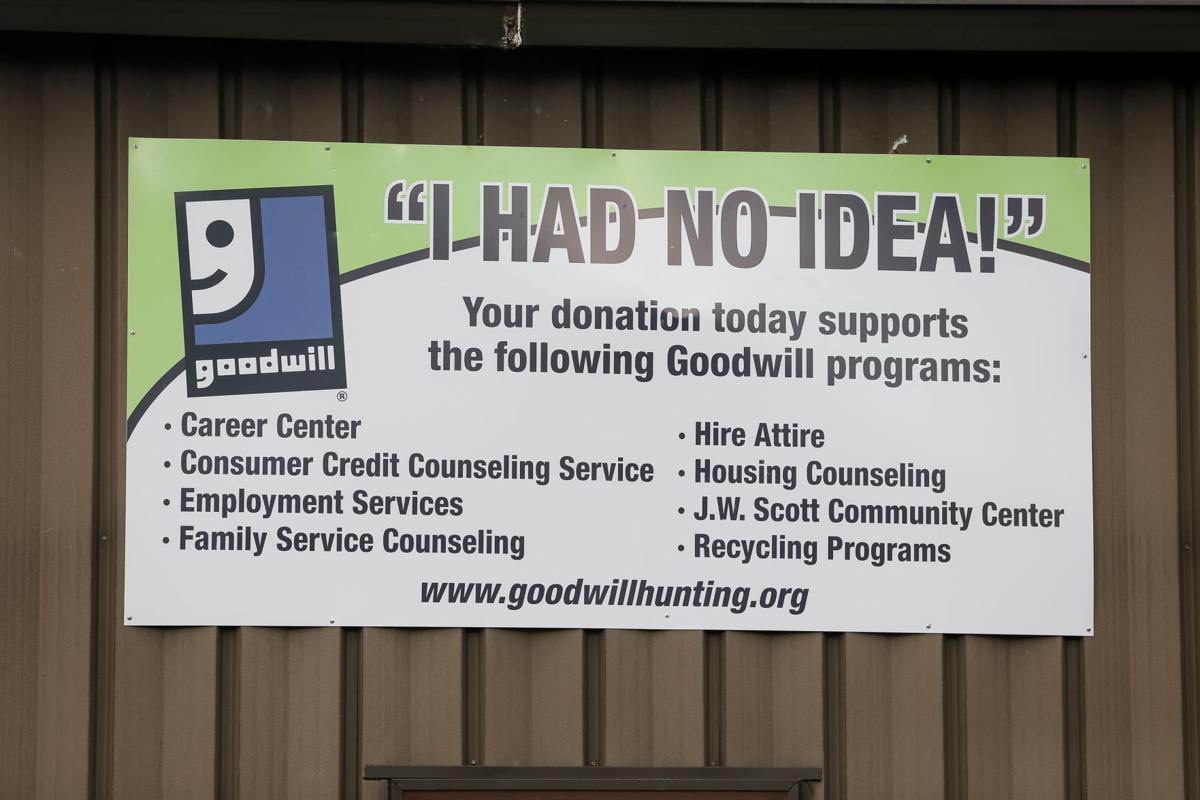 Sholten Singer/The Herald-Dispatch A sign lists all the programs Goodwill offers, seen on Wednesday, Nov. 22, 2017, in Huntington. The same sign is placed on the back of every Goodwill store to help get the word out about all of its programs.

Sholten Singer/The Herald-Dispatch Amber Blankenship works to sort donations in the processing area of Goodwill on Wednesday, Dec. 20, 2017, in Huntington.

Sholten Singer/The Herald-Dispatch A sign lists all the programs Goodwill offers, seen on Wednesday, Nov. 22, 2017, in Huntington. The same sign is placed on the back of every Goodwill store to help get the word out about all of its programs.

HUNTINGTON - Out with the old and in with the new.

It's a common phrase uttered around this time of year that many use as a way to usher in the new year.

While some may view it as just a figure of speech, employees at Goodwill Industries of KYOWVA hope folks in the Tri-State will take it quite literally.

Virginia Avenue Store Manager Doug Woodard said Goodwill stores typically see an uptick in donations during the holidays. Whether folks are looking to get rid of unwanted gifts from previous years or making room for new holiday gifts, Woodard said people end up turning to Goodwill.

Although most donating to Goodwill are aware of its nonprofit status and its retail stores, Alissa Stewart, CEO of Goodwill Industries of KYOWVA, said for the most part, people are unaware of all the good that comes from a simple donation to the Goodwill.

"Eighty-seven percent of every single dollar goes back into our community services and programs," Stewart said. "We're all about reinvesting in the community."

Anyone donating to Goodwill, Stewart said, can be sure that the organization will extract the most value out of any donation given.

When donations are made to one of the 13 Goodwill sites in the Tri-State area, they must first be processed and sorted, Stewart said.

If items are damaged, Stewart said they are sent to the recycling center. There, clothing is packaged into 1,500-pound bales and sent off to be recycled. While it may not be much, Stewart said the agency gets about 13 cents a pound for recycled clothing.

For appliances, Stewart said each item is stripped in order to get the most value for each part.

"We just got a grant for an industrial wire stripper so if you donate a vacuum cleaner that's broken, we'll take the precious metal out of the cord, then recycle the metal and the cord so nothing is wasted," she said.

In 2016, Goodwill of KYOWVA recycled more than 600 tons of clothing in addition to 331 tons of mixed paper, 233 tons of cardboard and 11 tons of metal. The sale of these recycled goods generated just over $186,000, according to information from Goodwill.

For items that are in good condition, Stewart said they either make it out onto their sales floor or to their online store.

If an item remains unsold in a store for five weeks, Stewart said it is then sent to the recycling center.

While Goodwill received more than 85,000 donations in 2016 valued at roughly $1.4 million, Stewart said unfortunately 60 percent of items they receive are trash.

"We never turn away a donation, but sometimes we do receive items that we can't sell or recycle," she said. "Sometimes the items may be super valuable to (the person donating), but by the times its gets here they may be wet or stained and there's not much we can do with that."

Despite these challenges, Stewart said Goodwill staff always try to be good stewards with every donation and remind people of just how far their simple donation goes.

On the back of nearly every store, above the door where people drop off donations, is a sign that reads, "I had no idea." Under those words is a list of programs that each donation funds.

Stewart said those choosing to shop in the store are also just as important.

According to information pamphlets distributed to donors and shoppers, one piece of clothing can provide 49 minutes of career guidance. Four pairs of jeans can provide 30 minutes of resume preparation. A single working computer can provide 4.4 hours of counseling.

Stewart said the list goes on. From serving as the main provider of sex offender counseling in the Tri-State to distributing hundreds of new gloves, coats and hats to children in need, Stewart said the agency strives to match their services to the needs of the community.

While each program and service is filling a valuable need, Stewart said Goodwill's main goal is to provide employment to people with disabilities and disadvantages.

Had it not been for Goodwill, Amber Blankenship, 24, of Huntington, said she knows without a doubt she would be sitting at home with no job experience and nothing to do.

"Without them, I wouldn't have a job," she said.

Blankenship has worked with Goodwill for the past two years and currently works in the warehouse of the Virginia Avenue location sorting donations.

Over the past two years, Blankenship said she has not only learned valuable trades but has also made lifelong friends, including Mary Clayton who has worked at Goodwill for more than 40 years and performed nearly every job.

"Always with a smile," Clayton said.

Blankenship said the experience at Goodwill has been invaluable and she only wishes she had a way to adequately thank Stewart and other Goodwill employees for their kindness.

Stewart said it's because of folks like Blankenship and Clayton that she knows she has the best job in the business.

"We give people an opportunity to shine," she said.