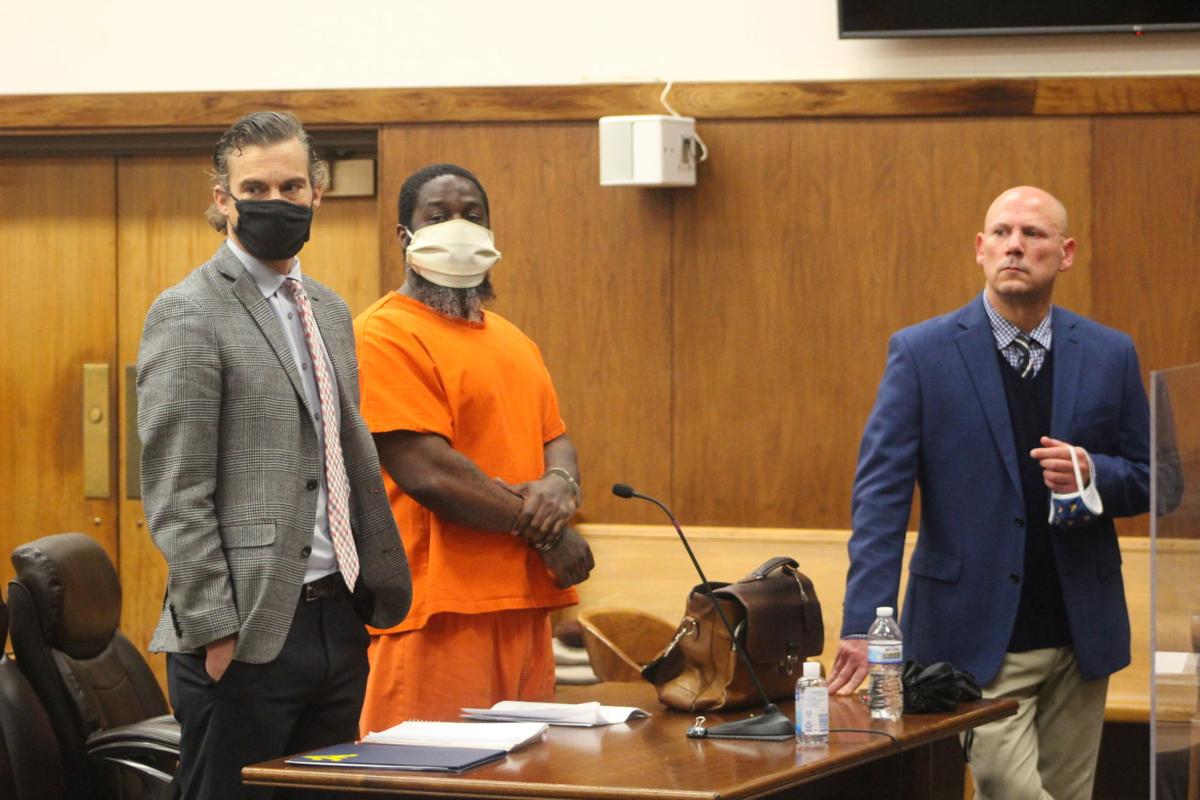 Zaire Ashanti Monroe, 37, of Huntington, center, stands with defense attorneys Todd Meadows, left, and Kerry Nessel on Thursday, Oct. 29, 2020, at his plea hearing in the beating death of Lisa Washburn. 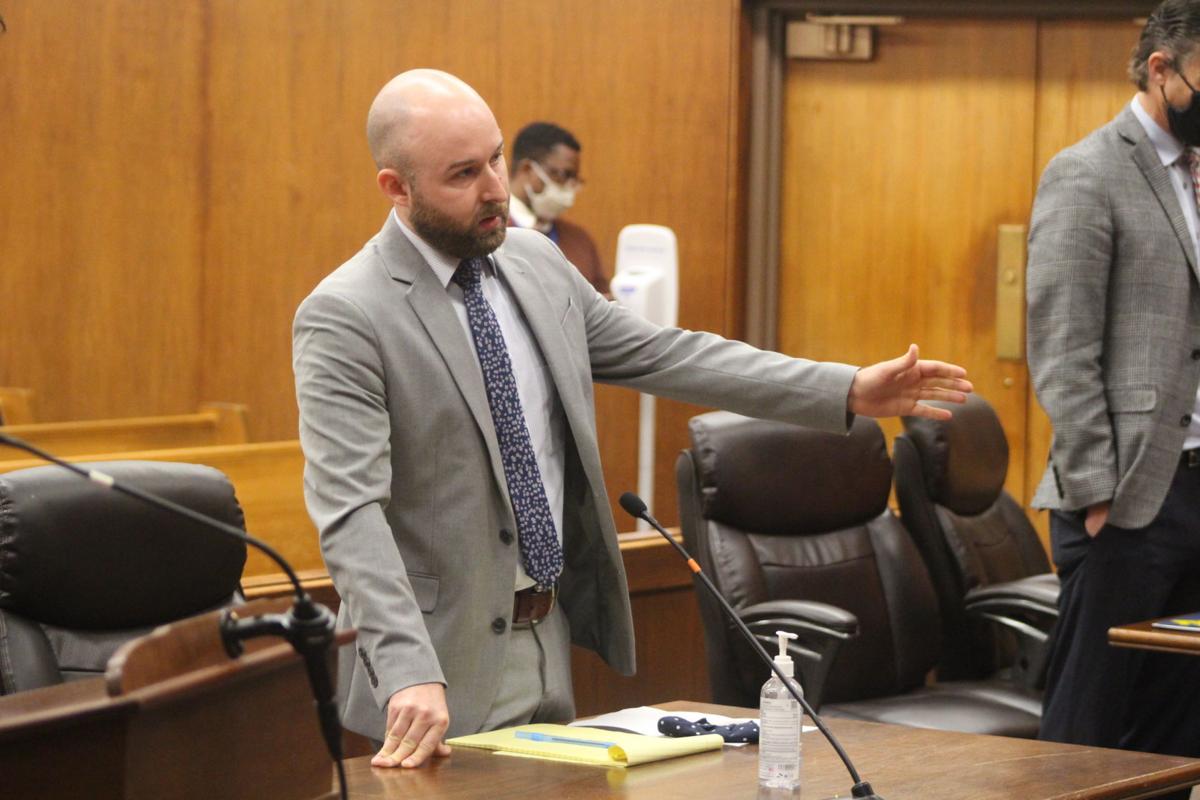 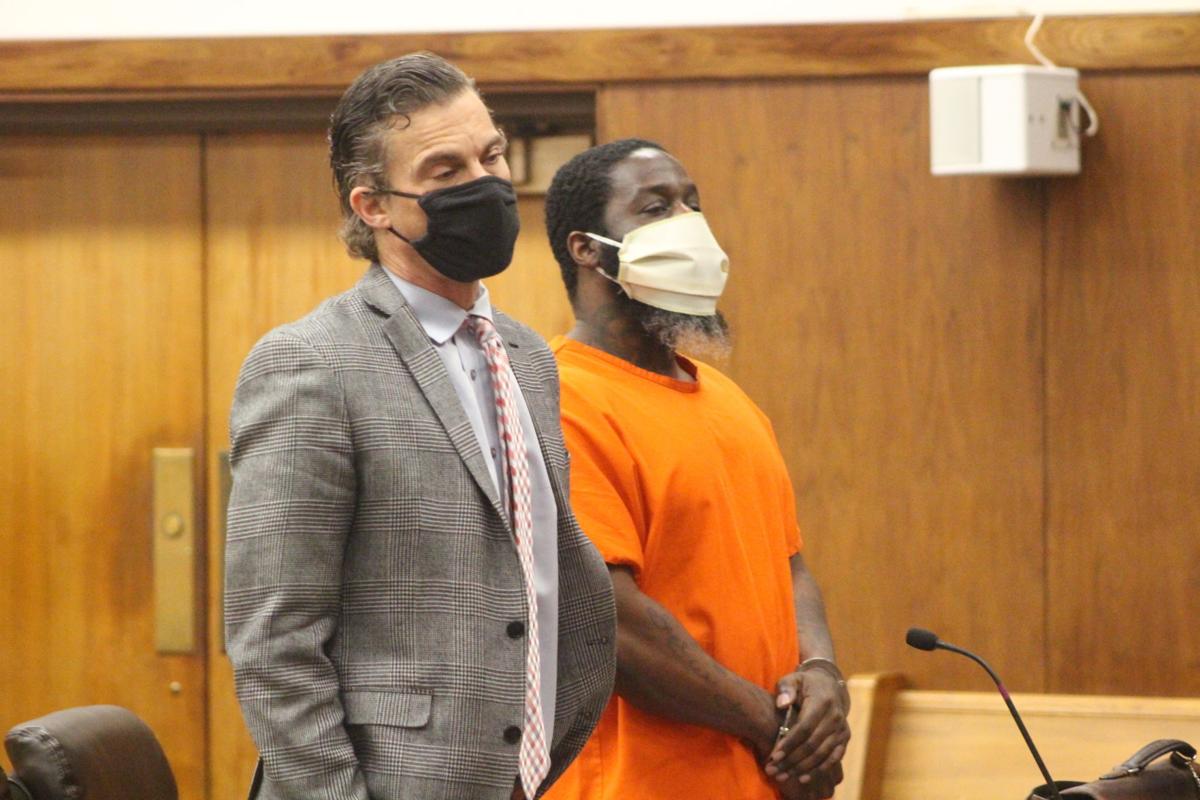 Zaire Ashanti Monroe, 37, of Huntington, right, stands with defense attorney Todd Meadows on Thursday, Oct. 29, 2020, at his plea hearing in the beating death of Lisa Washburn. 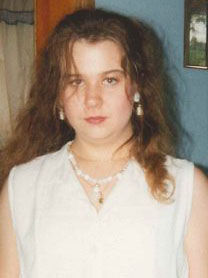 Zaire Ashanti Monroe, 37, of Huntington, center, stands with defense attorneys Todd Meadows, left, and Kerry Nessel on Thursday, Oct. 29, 2020, at his plea hearing in the beating death of Lisa Washburn.

Zaire Ashanti Monroe, 37, of Huntington, right, stands with defense attorney Todd Meadows on Thursday, Oct. 29, 2020, at his plea hearing in the beating death of Lisa Washburn.

HUNTINGTON — A Huntington man accepted punishment Thursday for the 2017 murder of a woman in West Huntington, a killing in which eyewitnesses said the naked suspect was acting like “an animal” as he beat the woman.

Zaire Ashanti Monroe, 37, of Huntington, entered a Kennedy plea to second-degree murder, which means he accepted the punishment for the crime without admitting guilt. Defense attorneys Todd Meadows and Kerry Nessel said that is because he does not remember the incident happening and could not describe his involvement.

Assistant prosecutor Owen Reynolds said the state will seek the maximum sentence of 40 years for the crime at Monroe’s Dec. 15 sentencing.

“The totality of the investigation showed Monroe had a history of severe addiction, in particular, methamphetamine,” he said. “Neighbors said they would see him up for days at a time and that he seemed he was a bit out of his mind in the weeks before this.”

Monroe’s conviction stems from the June 1, 2017, beating death of Lisa Washburn, 39, of South Point, Ohio, on the porch of a house at the intersection of 10th Avenue West and 5th Street West, about two blocks from where Monroe lived and where the altercation began.

Reynolds said at trial, eyewitnesses would have said they saw a naked man who matched Monroe’s description chase Washburn down the street and onto the porch of the house and beat her to death. The witnesses said Monroe was growling like an animal during the attack.

“When HPD arrived at the scene, they tracked clothing back toward the defendant’s residence about two blocks away,” he said.

In the clothing was a letter addressed to Monroe’s former wife with his fingerprints on it. Another eyewitness said Monroe was wearing those clothes earlier in the day.

Inside the home they found the victim’s phone, which had photo evidence the pair had been together that night, as well as her purse and other items.

Blood splatter from Washburn was also found in the home and a bite mark on her side matched that of the defendant.

The owner of the home where Washburn died said he heard the woman screaming, but could not make out what she was saying. He did not hear the man speak. The victim suffered severe head trauma, the homeowner said.

While an arrest warrant was issued against Monroe after Washburn’s death, he was not arrested for about six weeks until U.S. marshals found him in Florida.

Nessel said the attorneys were prepared to go to trial and thought Monroe had a strong defense in the case. Reynolds said the plea offer was made with the consent of Washburn’s family.

Monroe said he had served 10 years in prison previously for a robbery conviction.