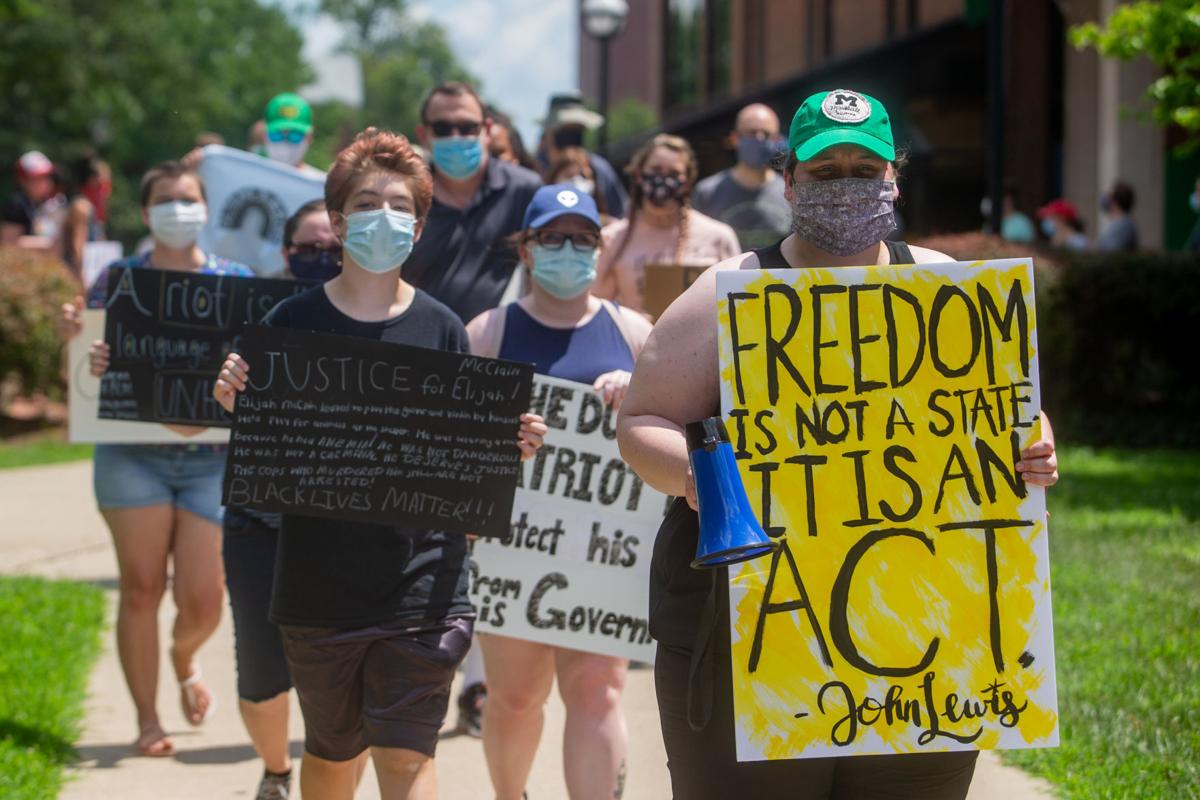 Cara Eskins, of Huntington, leads the protest march as people head downtown from Marshall University’s campus in support of black lives on Saturday, July 25, 2020, in Huntington. 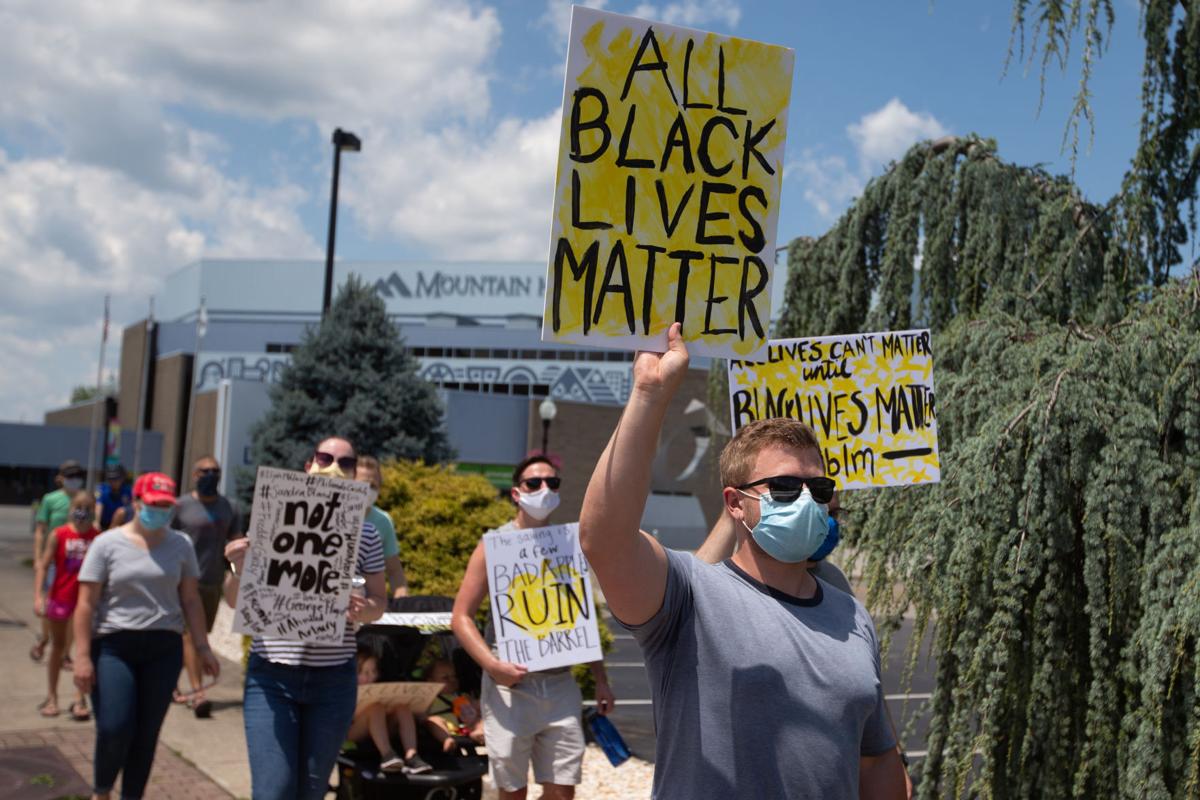 People march down 3rd Avenue from Marshall University’s campus in support of black lives on Saturday, July 25, 2020, in Huntington. 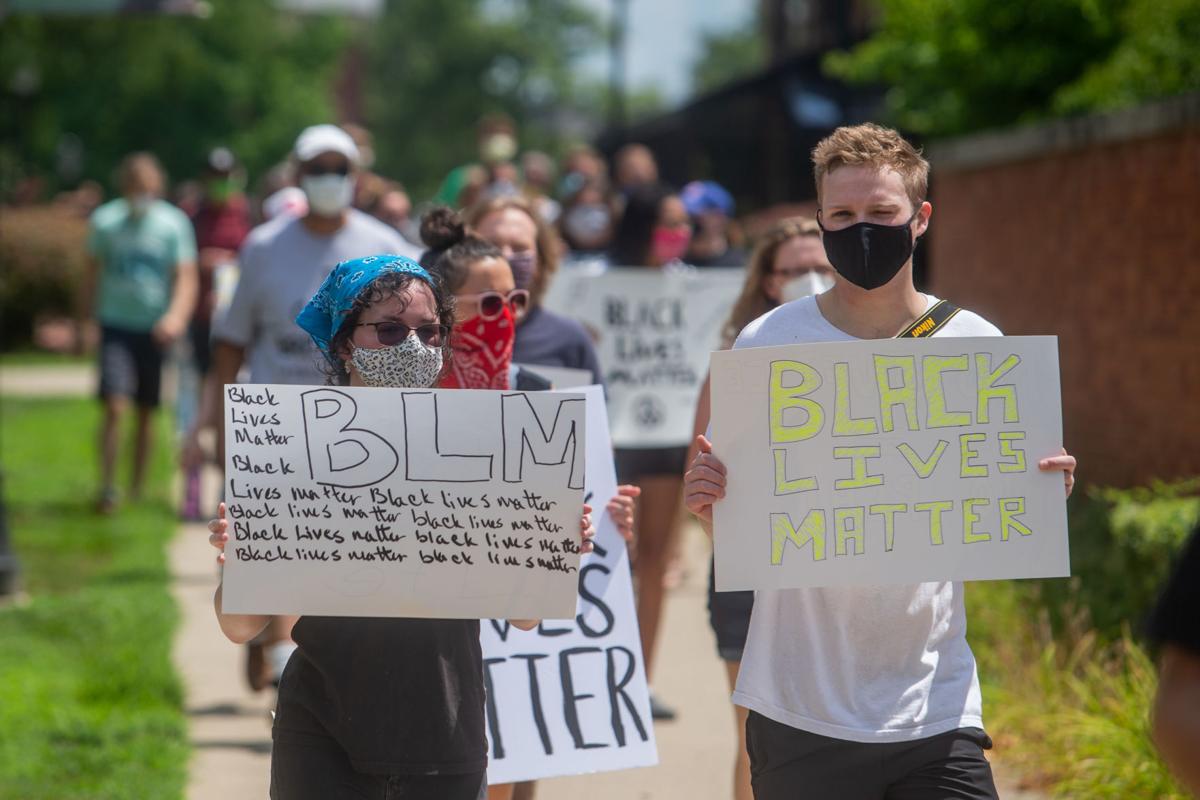 People march toward downtown from Marshall University’s Memorial Student Center in support of black lives on Saturday, July 25, 2020, in Huntington.

Cara Eskins, of Huntington, leads the protest march as people head downtown from Marshall University’s campus in support of black lives on Saturday, July 25, 2020, in Huntington.

People march down 3rd Avenue from Marshall University’s campus in support of black lives on Saturday, July 25, 2020, in Huntington.

People march toward downtown from Marshall University’s Memorial Student Center in support of black lives on Saturday, July 25, 2020, in Huntington.

HUNTINGTON — Dozens of peaceful protesters lined the streets of Huntington on Saturday afternoon as they marched from Marshall University to Pullman Square in support of the Black Lives Matter movement and First Amendment rights.

Since May, gatherings targeting racial injustice and police violence have popped up locally and across the country, sparked by the death of George Floyd, a black man who died in Minneapolis in police custody.

Saturday’s march was intended to amplify the BLM movement, Cara Eskins, an organizer of the event, said, and those in attendance were also standing in solidarity with protesters facing criminal charges, specifically those in Portland, Oregon, who were arrested during demonstrations last week.

“Like many people around the country, I’m really just upset and disturbed by the use of federal troops or enforcement officers to quell largely peaceful protests in Portland,” Eskins said. “And we just wanted to show our solidarity with them by using our right to free speech. We just wanted to come out here and show our support and say that Black Lives Matter.”

Huntington resident Anthony Stradwick said it was encouraging to see people from all walks of life come together to support the cause.

“I really think people are coming together against injustice,” he said. “We’ve had injustices going on in this country for a very long time, and it usually takes a death — like Abraham Lincoln, Martin Luther King, now it just happens to be George Floyd — it usually takes something like that to really bring awareness to things that need to be made aware of.”

Marshall graduate students Adriana Cook and Vanessa Hissam attended the march to exercise their right to protest and take a stand against systemic racism.

“I think Huntington is the one place that really goes far to advocate and talk about the things that matter and raise awareness, and it feels safer here, although the reason we’re here is because we aren’t safe,” Cook said. “Even peaceful protesters are starting to get taken, and I think we should be able to exercise our right to peaceful protest. We’re not here to do anything crazy — we are here to make a statement.”

“In so many places black lives don’t matter. We’re here to show our support and to say that black lives do matter. We’re here, and we’re going to protest if there are wrongdoings,” she said. “It’s not just police either — there are racial issues in every single system in America, and we need to pass laws that actually advocate for everyone. American systems were built for white people, and they’ve been changed, but they’ve never been completely equal. That’s what we want — we want to work toward that.”

Saturday’s event was the second of its kind in the city.

Hundreds of Huntington residents marched May 30 at an event called “Walk, Stand and Speak for George Floyd” five days after his death May 25.

People march to Pullman Square throughout downtown Huntington in support of black lives on Saturday, July 25, 2020, in Huntington.