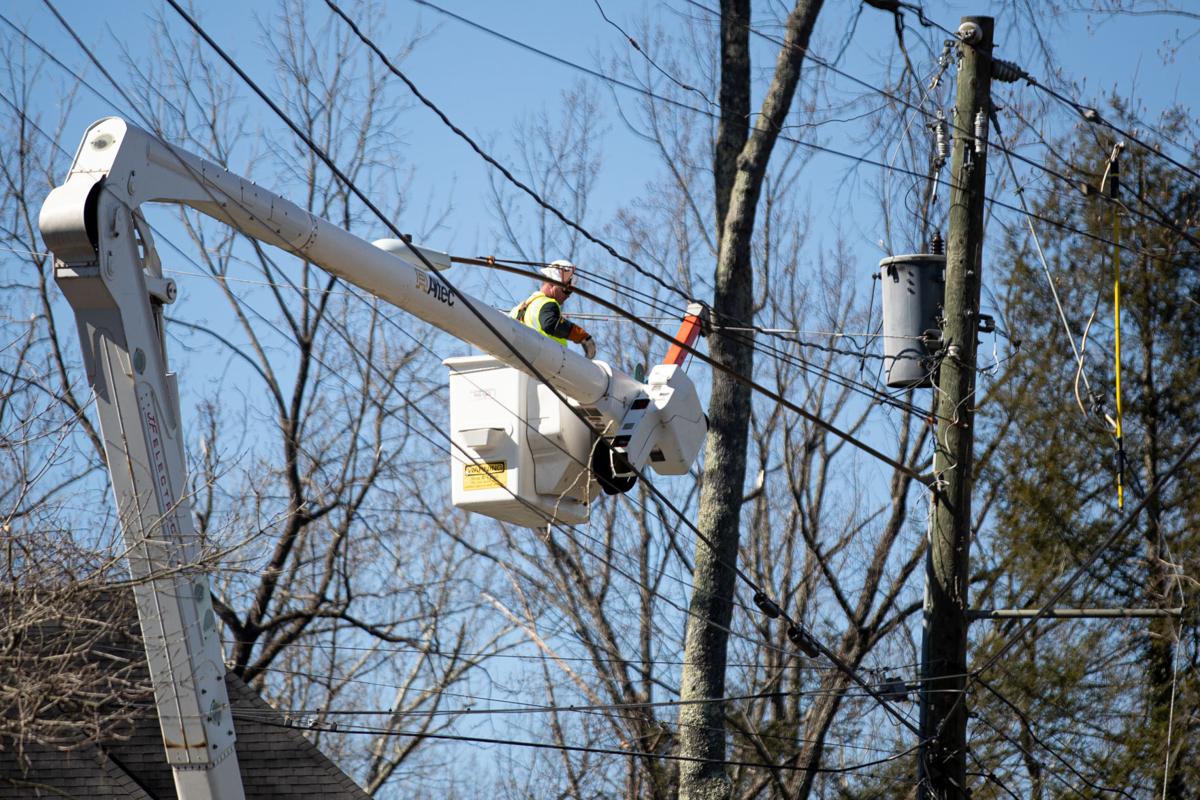 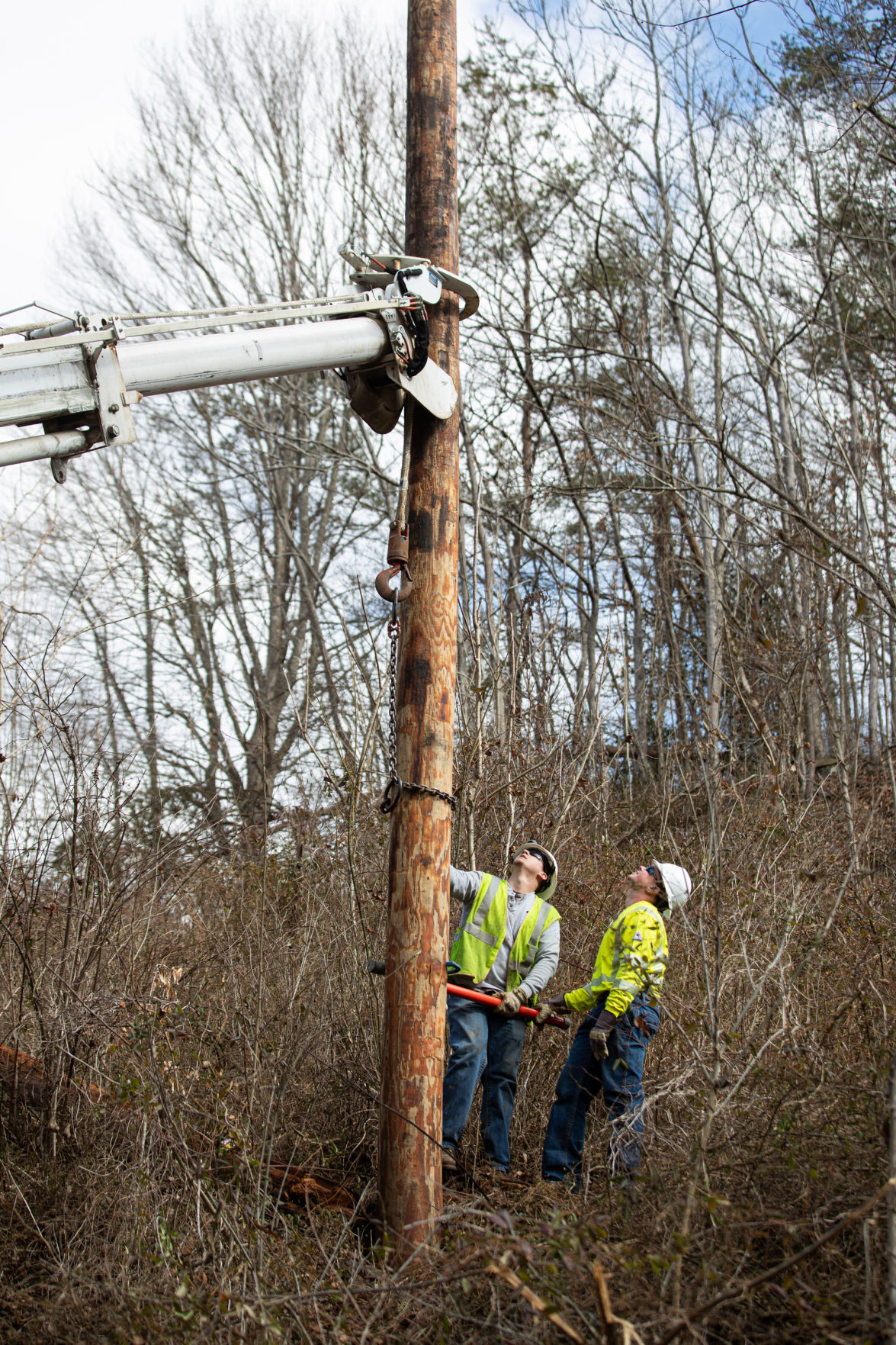 A utility crew with Intren works to install a new utility pole along Deer Pen Road on Thursday, Feb. 25, 2021, in Lesage. 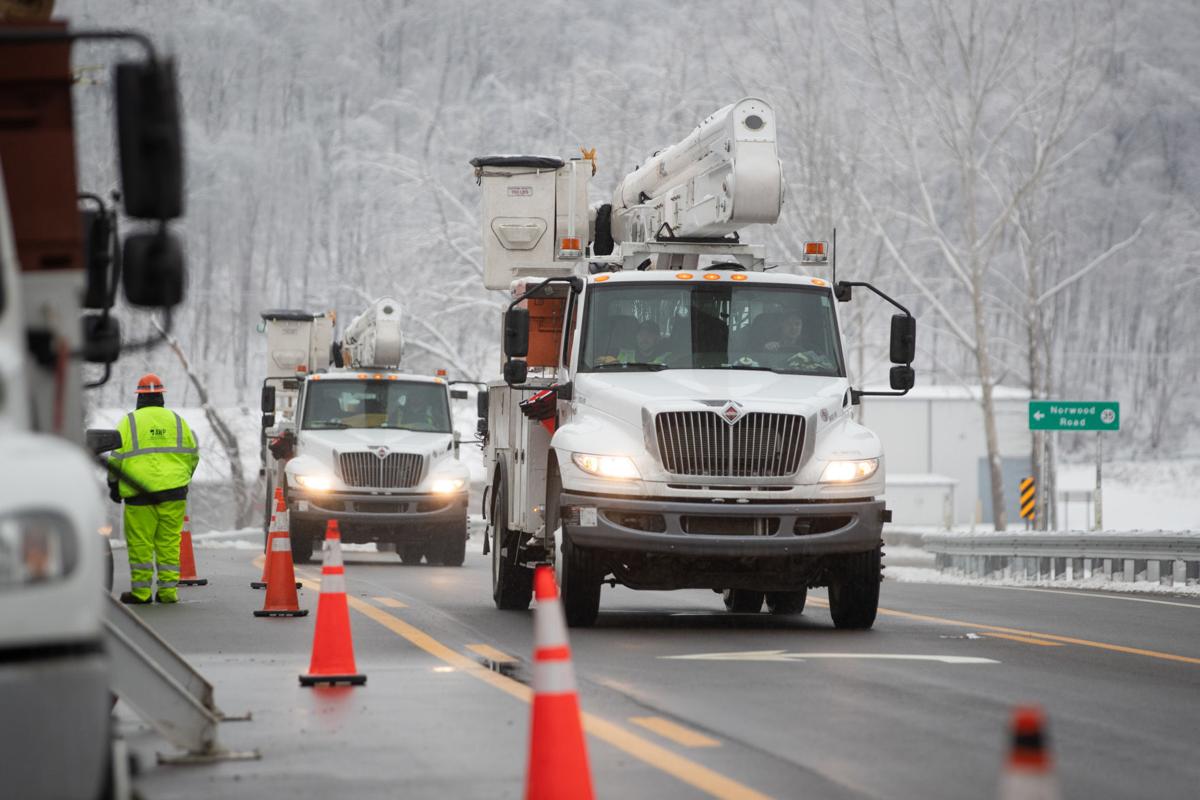 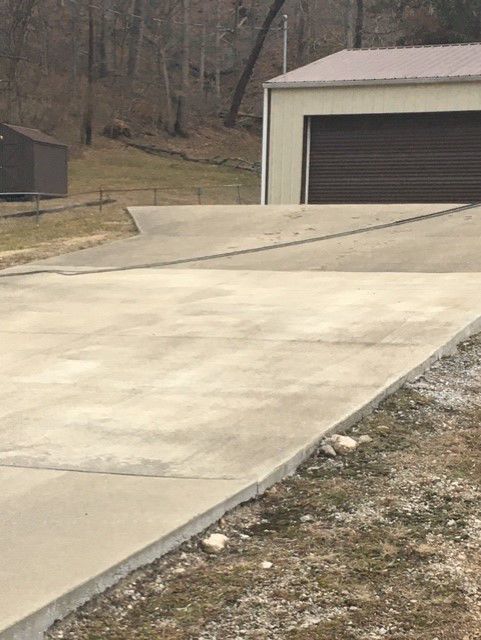 A downed power line rests on Donna Drown’s driveway Wednesday in Wayne County, a day after power was restored to her home following a two-week wait.

A utility crew with Intren works to install a new utility pole along Deer Pen Road on Thursday, Feb. 25, 2021, in Lesage.

A downed power line rests on Donna Drown’s driveway Wednesday in Wayne County, a day after power was restored to her home following a two-week wait.

CHARLESTON — Donna Drown says living without power for two weeks during a cold spell was like a grueling camping trip.

Drown’s only relief from a blood clot in her leg is taking a hot evening bath, but without hot water during the outage, her leg swelled. Her husband has two torn rotator cuffs, and so it was a challenge for both of them to carry 5-gallon canisters of gasoline to fuel their generator. Drown’s 90-year-old mother came to stay with her and her husband in their Wayne County home after she lost power and three deep freezers full of food 5 miles away.

“It was really tough to pull this off,” Drown said.

But at least Drown had a gas fireplace to keep the living room warm as temperatures dipped below 15 degrees. One neighbor had to leave home for two weeks, while people in the three-child household beside her didn’t get a generator until two days before the two-week-long outage ended.

“It was really hard on the people,” Drown said.

Drown’s power was restored Tuesday night, but there were still more than 3,000 outages out of about 23,000 Appalachian Power customers in Wayne County on Friday afternoon, 15 days after the first of two ice storms caused a peak of 97,000 outages among the company’s customers in West Virginia.

West Virginia has had the highest percentage of customers experiencing outages among all 50 states for most of this past week. West Virginia topped much larger states with the highest total number of outages remaining as power was restored more quickly elsewhere, according to outage maps from Data Fusion Solutions and Bluefield Studios LLC.

“We lose power pretty constantly,” Drown said, estimating that her area endures outages about six times a year for long periods. “It’s sometimes four or five days even without an ice storm before we get service back.”

Appalachian Power moved in 2014 to a cycle-based vegetation management approach in which all circuits are managed end to end every six years, which utility spokesman Phil Moye said was “dramatically different” from the usual method of managing vegetation along lines based on the worst trouble areas.

The approach has yielded progress, according to Moye, who said outages within the company’s rights of way have decreased 61%.

The state Public Service Commission in 2013 ordered all electric utilities to file time-cycle-based right of way vegetation control programs and status reports on planned improvements to their storm response procedures within six months, citing a derecho that left 1.6 million West Virginians without power, some for two weeks.

But an HD Media review of seven years of electric reliability data for utilities nationwide from the U.S. Energy Information Administration shows outages grew longer and more frequent for customers of West Virginia’s utilities since 2013, even outpacing national increases in those categories.

Appalachian Power’s System Average Interruption Duration Index, a reliability indicator measuring average yearly duration of outages, was 702 minutes, including major event days (when outages exceed the usual averages for a given day, like during severe weather) and 596 minutes, excluding them in 2013.

That means the average Appalachian Power customer was without power for nearly 12 hours during the year when including days when severe weather or other factors drove outage metrics up.

In 2019, the most recent year for which U.S. Energy Information Administration data was available, those averages rose to 900 minutes and 650 minutes, with and without major event days, more than three and nearly five times the national averages for those respective categories.

Appalachian Power’s System Average Interruption Duration indices with and without major event days for its West Virginia customers have consistently been among the nation’s highest.

The utility’s System Average Interruption Frequency indices with and without major event days have increased substantially over the past seven years as well, meaning outages are becoming more frequent in addition to growing longer.

FirstEnergy subsidiaries Mon Power and Potomac Edison have not fared as poorly as Appalachian Power and Wheeling Power in reliability metrics but have seen their duration and frequency indices increase since 2013 as well.

“When they do come and cut, they don’t necessarily cut everything they should cut along the roads,” Drown said.

“I mean, I can’t go to a property owner and say, ‘Your tree’s big; I want to take it down,’” Ross told the commission. “I have to have some indication that it’s a hazard to our facilities for some reason.”

In response to the commission’s request at the status conference to submit new reliability index targets, Appalachian Power and Wheeling Power earlier this month offered targets less stringent than those they have been failing to meet. But they added that they did not recommend that move, saying the existing targets should remain in place.

Nadine Perry, of Putnam County, went without power for 13 days until it was restored Thursday night. Her generator came in handy, using 10 gallons of gas a day to keep a water pump, refrigerator, TV, internet and a couple of lights working.

Outages just come with the territory, said Perry, who raises pigs in Pliny.

“People around here are pretty tough,” Perry said. “Everybody pretty much has a generator and a plan B for stuff.”

Perry plans to get a more high-powered generator, which makes sense given increases in outage duration among West Virginia electric utilities in recent years as the Mountain State endures the effects of climate change along with the rest of the country.

Of the $285 billion weather and climate disasters since 1980, 119 came from 2010 through 2019, according to the National Oceanic and Atmospheric Administration.

An analysis last year by the science news organization Climate Central showed a 67% increase in major power outages from weather-related events since 2000.

The trends point toward West Virginia’s rural residents being powerless more often in the future, and the state’s electric utilities will have to turn them around in difficult terrain.

“There aren’t as many people out here on my line,” Drown said. “But that shouldn’t mean that we don’t get assistance whenever we need it.”

Power still out for many in region

In Kentucky, 159 Kentucky Power customers in Lawrence County were experiencing outages as of Saturday, along with 34 in Boyd County.

Buckeye Rural Electric Cooperative reported as of Friday night, all of its members in southern Lawrence County had seen their power restored.