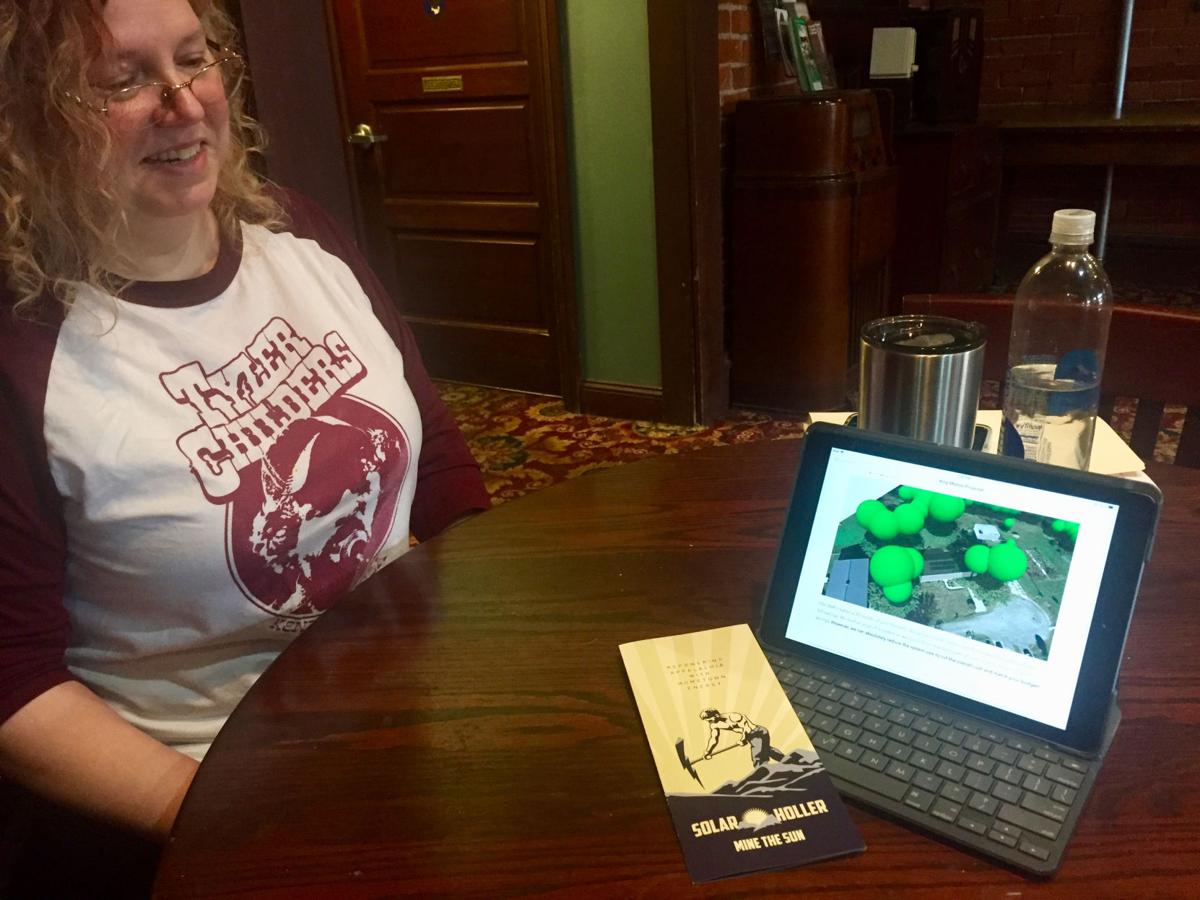 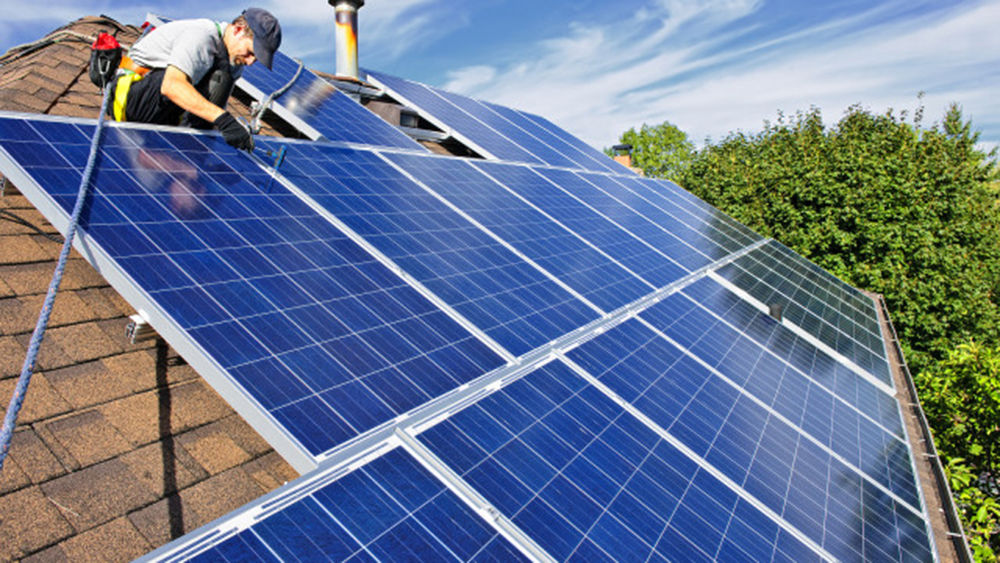 Submitted photo Solar panel installation is becoming increasingly popular for West Virginia homeowners. Currently, there are 680 homes in West Virginia with solar power, according to the Solar Energy Industries Association.

Submitted photo Solar panel installation is becoming increasingly popular for West Virginia homeowners. Currently, there are 680 homes in West Virginia with solar power, according to the Solar Energy Industries Association.

HUNTINGTON — It was John F. Kennedy who once said, ''The sun does not always shine in West Virginia, but the people always do.''

While that may be the case, a small group of people here are indeed "Mining The Sun," as is the motto of Shepherdstown-based Solar Holler, which has been working with the nonprofit Coalfield Development Corp. of Wayne to help train workers here to install solar panels.

These days, those workers for Solar Holler are installing panels on everything from nonprofits and businesses - like Ed Tucker Architects in Huntington - to an increasing number of homes in West Virginia.

In the Mountain State since 2013, Solar Holler began as a one-man mission as West Virginia native Dan Conant - who has a master's of science in energy policy from Johns Hopkins University, was the first employee of Vermont's largest solar installer and is a former adviser to the U.S. Department of Energy's SunShot Initiative - moved back home to bring solar here.

He said it has been refreshing to see the growth in the solar industry since he moved back to the state.

"When I started Solar Holler there were about 15 people in the entire industry in West Virginia, and now we are over 20 people just in our organization," Conant said. "So things are definitely getting there, and it is exciting to be a part of both making things happen on the ground, and also telling that story that things are much more in reach than most people realize. ... That has been the most gratifying part - to spread solar to folks across the state no matter what your situation is, to help folks tap into it."

While Conant originally was working solely with nonprofits such as churches and libraries, there has been an increasing number of homeowners in West Virginia installing solar panels. Currently, there are 680 homes in West Virginia with solar power, according to the Solar Energy Industries Association.

"We are working statewide, and it is with homes and businesses and nonprofits. We got our start working with nonprofits, but most of our work these days is in helping homeowners," Conant said.

Conant said the neat thing with the growth of solar in the area is that it truly is widespread from cities to farms and for folks tapping into it for a variety of reasons.

"It really is across the region. We are doing stuff in Milton and in Barboursville and in downtown Huntington," Conant said. "We are getting interest across the region, which speaks to the fact that this is really appealing to a lot of folks whether you are coming at this from an environmental angle, or the angle of, 'Hey I just want to save money on my bills because I am spending way too much.' ... One farm we worked with in Hinton - it was on top of a mountain, and they said they could lose power for three weeks at a time. So if they lose that, there goes an entire season of their work. So we were able to put in an entire solar system with battery backup and protect their livelihood in a way that the standard utility couldn't."

How to know if

solar works for you

"... we like to work with the homeowners to do a 3-D model, and what is really cool about this is we can design a system perfectly for your house knowing exactly how much sunlight will hit every square inch of the roof," Conant said. "So we model it out based on the trees and the chimneys and where the sun is at every hour of the day throughout the year, and from that we can figure out exactly how much electricity each section of roof will produce. Whenever we work with a homeowner, that is our first step, and we do that for free. There is a little bit of variation from year to year based upon how cloudy the year was, but we can get within a percent or so."

Conant said Solar Holler's team, which in Huntington includes Eve Marcum-Atkinson, who did work with Marshall University Sustainability, can also help figure out the financial part of the puzzle for homeowners.

"So from the time someone comes to us, it takes us about 15 minutes, and we can have that done and do a full 25-year cash flow analysis," Conant said. "So that is a big piece of what we have been building out - getting all of the data together - so we can help folks ... know exactly what this will do for them."

According to the Solar Energy Industries Association, the price of putting on solar in West Virginia has dropped by 55 percent over the past five years.

Marcum-Atkinson said during the 25-year warranty of the solar panels they can generate energy savings that are 150 to 200 percent above the gross costs of install.

"Add to that any of your tax credits, and it does pay for itself, and you do get money back and you keep getting money back - that is a big change," Marcum-Atkinson said. "The systems are paying for themselves and produce that much extra in energy savings."

Currently, there is a 30 percent federal tax break for solar installation that is good for anyone adding solar. That law is in place through 2021. There are also additional incentives for businesses and farms, Conant said.

Conant said there has been much ado in the industry about the late January announcement from the Trump administration of a 30 percent tariff on foreign-made panels. According to USA Today, the vast majority of the U.S. solar industry opposed an import tax, saying it would raise the price of solar power and undercut an industry that employs more than 260,000 people, which - according to the nonprofit Solar Foundation - is more people than work in coal or natural gas.

"Things are stable in West Virginia," Conant said. "Everyone by law can get credits on their bill through what is called net metering. That law has been in place for over 10 years in West Virginia. ... As far as the tariff goes, we were disappointed by the policy. I think it is a bad policy, but it is just a ripple in its effect on us. The fact is there are barely any panels made in the country right now, so the vast majority are not made in the U.S., and that tariff went not just against China but also Mexico and Canada and Japan and every single country in the world that makes panels. That said, the tariff is relatively small compared to the price of the system, so that is why we say it is a minimal effect."

of solar in the Tri-State

While the solar energy sector employs more people than natural gas or coal nationwide, currently only 381 people work in the industry in West Virginia.

Conant said Solar Holler, which employs more than 20 people, is making an impact locally thanks to its continued partnership with Coalfield Development through its ReWire Appalachia program.

"... In our training program, we have our third cohort going through the program. The annual class takes up to 10 people each year. We officially launched the program in 2015 - we have grown a ton - so all together, we have more than 20 people on the team working. It is kind of cool because we are all bringing different skill sets, different talents and focuses to the shop and to the operation. We have master electricians, we have experienced roofers, we have folks who do the design and engineering, and so it is across the board what cool stuff we are all bringing in to make renewable energy happen."

In addition to retraining some coal workers for a new field, Conant said Solar Holler will become part of the downtown Huntington business community when it opens a local office this spring on 8th Street across from the courthouse.

Conant said that in addition to putting on solar panels and systems, Solar Holler has already impacted Huntington thanks to its Energy Efficiency program, which has been funding and retrofitting area nonprofits.

"I really view our role as not just producing solar but also helping organizations and families cut their utility bills. Toward that end, we have been working with several different organizations in the Huntington area where we have a fund available to do energy efficiency retrofits," Conant said. "Those have taken place at such agencies as The Boys and Girls Club on 14th Street West in Huntington, and the Coalition for the Homeless. We paid for LED lights for all of ... Vanity Fair (a 53-unit downtown apartment complex for the homeless). That has been a really cool part of what we do too."

Go online at https://home.solarholler.com/ and click onto the "Can Solar Work For You?" button to begin the assessment process to finding out how efficient solar panels would be at your home.