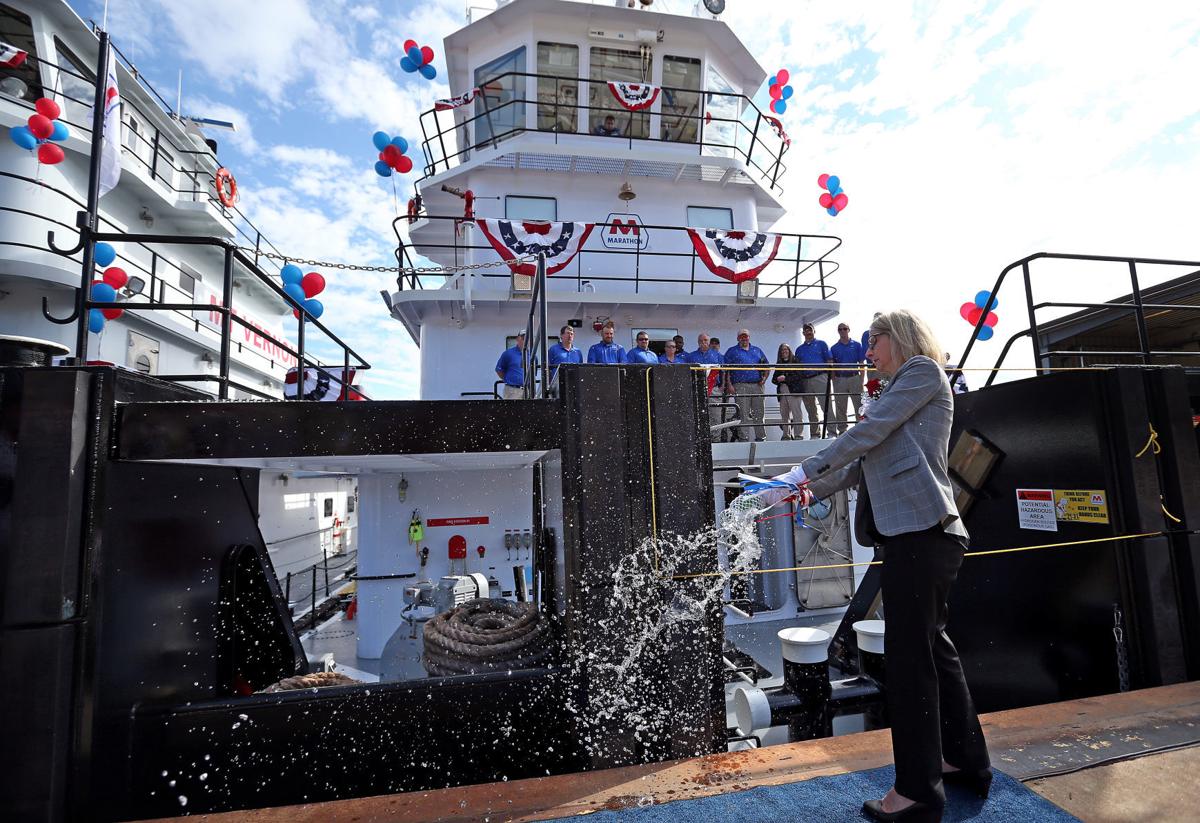 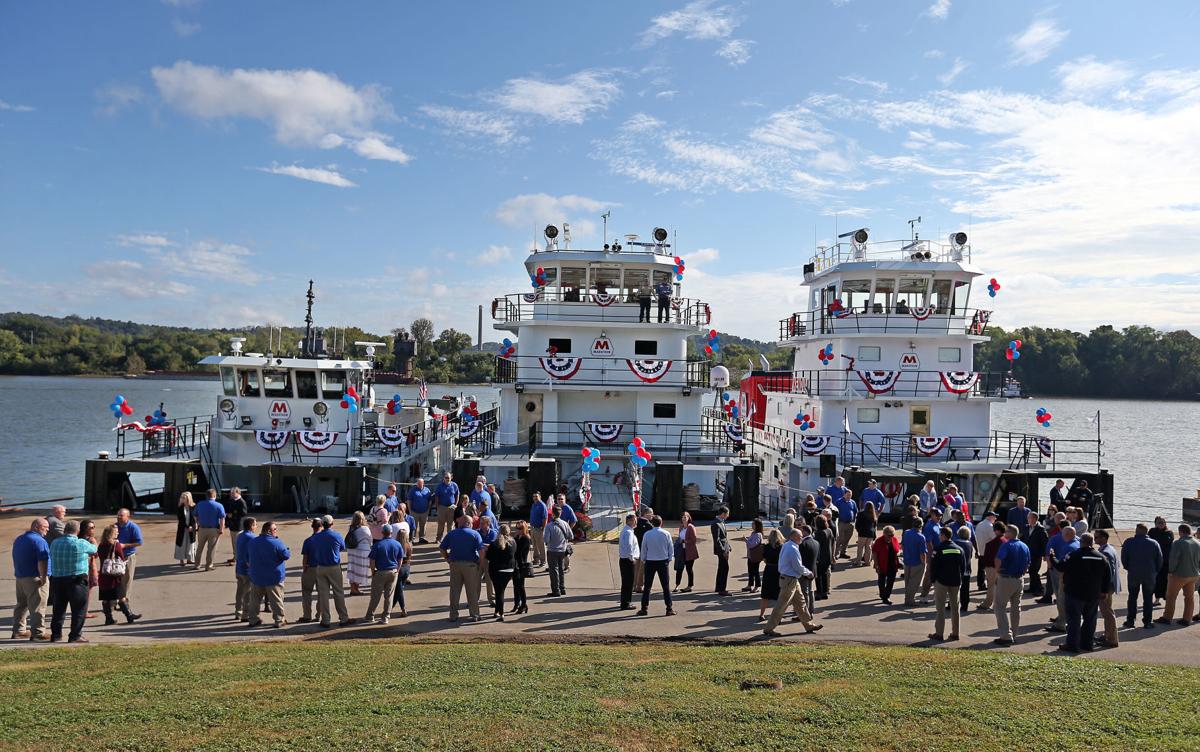 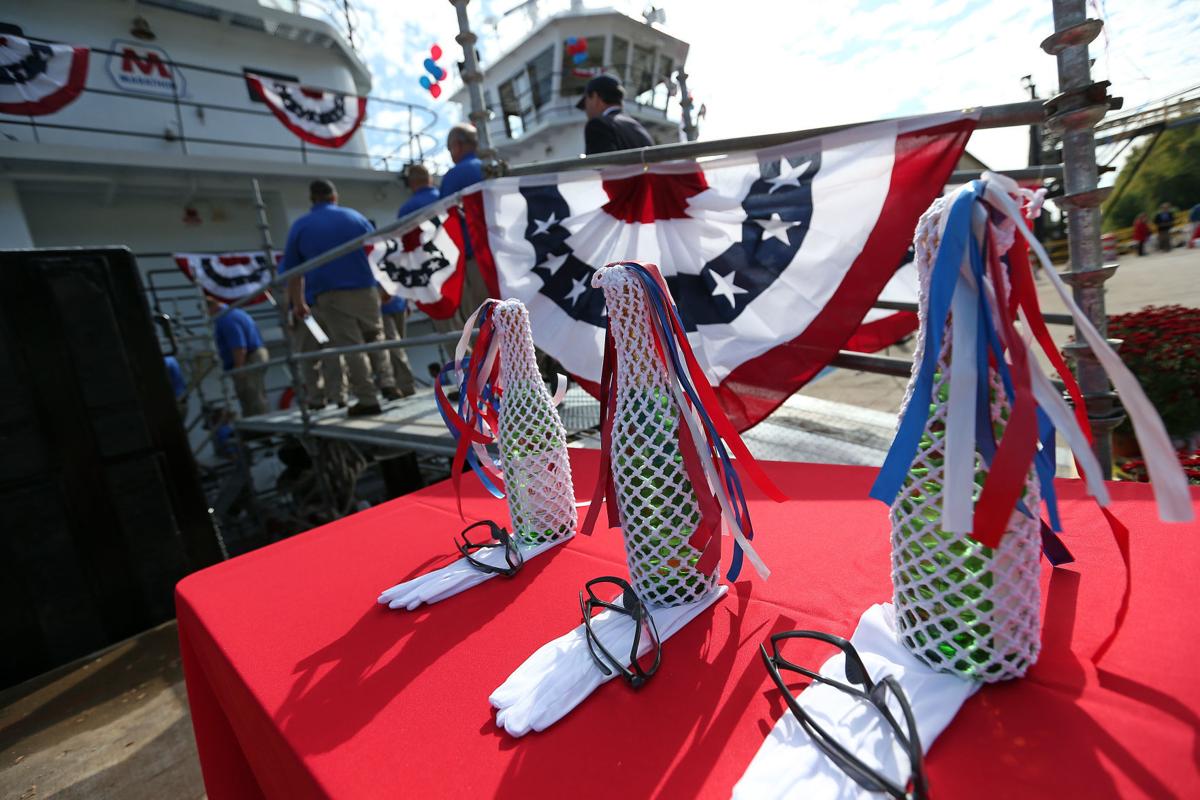 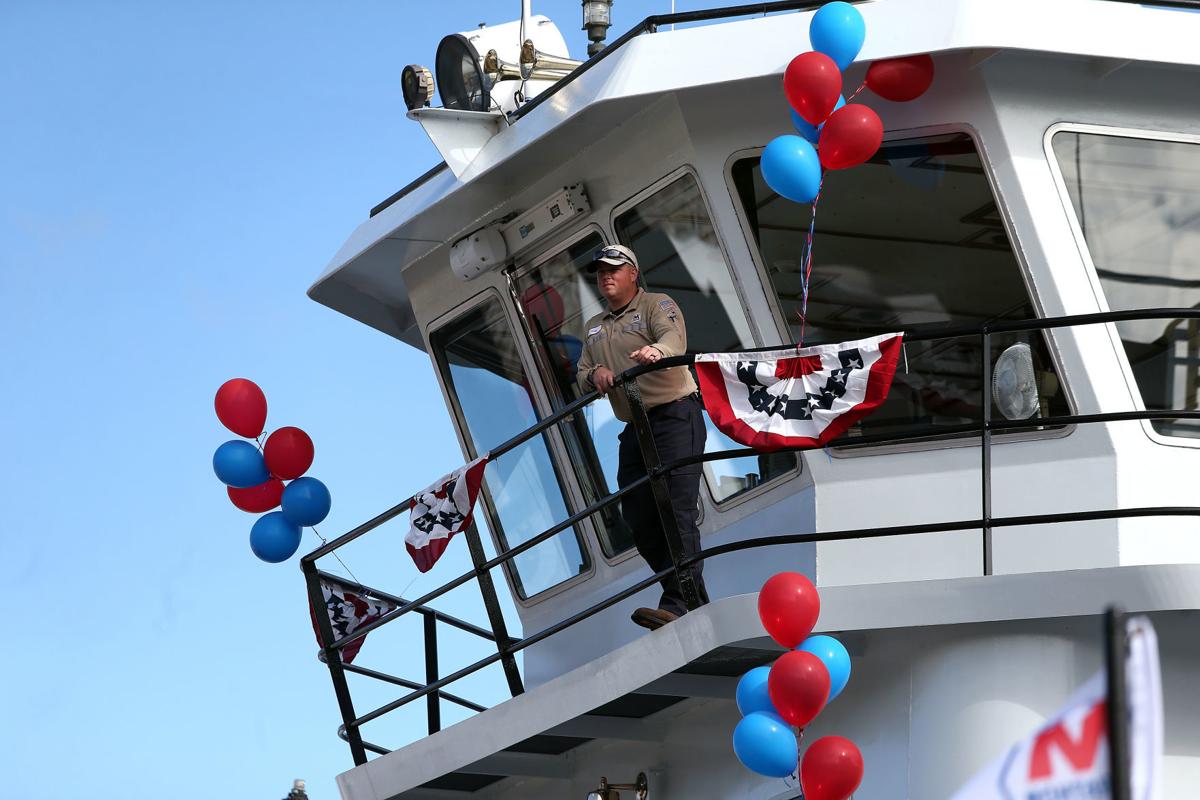 A christening ceremony for three vessels in the Marathon Petroleum Marine Transportation fleet is held Tuesday in Catlettsburg, Ky.

A christening ceremony for three vessels in the Marathon Petroleum Marine Transportation fleet is held Tuesday in Catlettsburg, Ky.

CATLETTSBURG, Ky. — Paul Mangini, commanding officer of the U.S. Coast Guard Marine Safety Unit in Huntington, says boat christening ceremonies date back thousands of years and are an age-old tradition that brings good luck to the vessel and those who travel on it.

“This ceremony pays tribute to the men and women that work on the rivers,” he said.

Mangini made his comments and presented American flags to the towboats’ captains during a christening ceremony Tuesday morning at the Marathon Marine Transportation Docks in Catlettsburg, Kentucky, for three towboats now in the company’s fleet of 23 boats and 256 barges.

The ceremony was hosted by Marathon Petroleum’s Marine Transportation group.

The three towboats — the Kenova, the Mount Vernon and the Patoka — were named for terminals or cities where terminals are located, said Todd Sandifer, manager of Marine Transportation.

“This is a time-honored tradition that really recognizes the crew, the vessels and gives them their proper name that we assigned them,” Sandifer said. “This ceremony also lets the crew and their families know how much we appreciate them before sending them on their safe journeys.”

The company’s fleet of boats and barges transport light products, heavy oils, crude oil, renewable fuels, chemicals and feedstocks to and from inland refineries and terminals throughout the Midwest and Gulf Coast regions.

“For the crews of these vessels, this is their second home,” Sandifer said. “They are on these vessels for 28 days at a time, and it’s almost like having a second family. It’s important they have a great and safe place to work.”

The vessels were purchased as part of a growth opportunity, according to Sandifer.

“These are state-of-the-art towing vessels, equipped with some of the most recent technologies out there today,” he explained.

The Kenova, which was built in 2018, is 120 feet long by 35 feet wide. She carries 56,000 gallons of fuel and typically operates on the Ohio River and its tributaries, capable of running six to eight barges.

“She is a 4,000 horsepower vessel that is the workhorse of our fleet,” Sandifer said.

“It has an articulating, retractable pilothouse that goes up and down, so in periods of high water when you can’t get under bridges with a normal towboat, you can lower this pilothouse and safely move underneath bridges,” Sandifer explained. “It is the first of its kind in Marathon’s fleet. She typically operates on the Ohio River and its tributaries, moving six to eight barges.”

Sandifer says the Kenova typically has a crew of eight on board with room for nine, while the Mount Vernon has a typical crew of nine with room for 12.

“On the Patoka there is typically a crew of seven,” he added.

The event’s keynote speaker, John Swearingen, executive vice president of Logistics & Storage at Marathon Petroleum, said the company has one of the largest and finest inland marine fleets in the country.

“We are here today to mark yet another chapter in what truly is an amazing story in the domestic transportation fuels industry,” he said. “Nowhere else in the world but in the good old U.S. of A. can any one of more than 200 million vehicles pull any one of 150,000 service stations and in a matter of minutes take on enough energy to propel a multiton vehicle down the road without, I might add, the range anxiety of some plugged in electric microcar — and do all of that at a fraction of the cost that you pay for bottled water.”

Swearingen said making all that happen are the dedicated people at America’s energy companies, like the men and women at Marathon.

“Marathon’s integrated, refining, marketing and transportation system is the marvel and envy of the industry,” he said. “By optimizing our system, we’re able to effectively meet the transportation fuel demands of our customers across the nation. A key aspect of that system is its flexibility, both in producing the fuels and moving them to market. Without a doubt, one of those most flexible components is the Marine Transportation group.”

Swearingen said that even though the Marine Transportation group transports just a fraction of Marathon’s systems feedstock and products, they still affect every drop produced.

“By being able to supply the Midwest river system markets and their growth, the marine group frees up products to move efficiently and supply markets across the entire Midwest, Southeast, Northeast and even export markets,” he said. “Put simply, the marine group provides the flexibility to react and compensate to provide a near seamless supply to our customers.”

Invocation and presentation of Bibles to the vessels’ captains were done by Chaplain John Drymon, Chaplain George Sherrill and Chaplain Karen Sherrill, all with Seamen’s Church Institute.