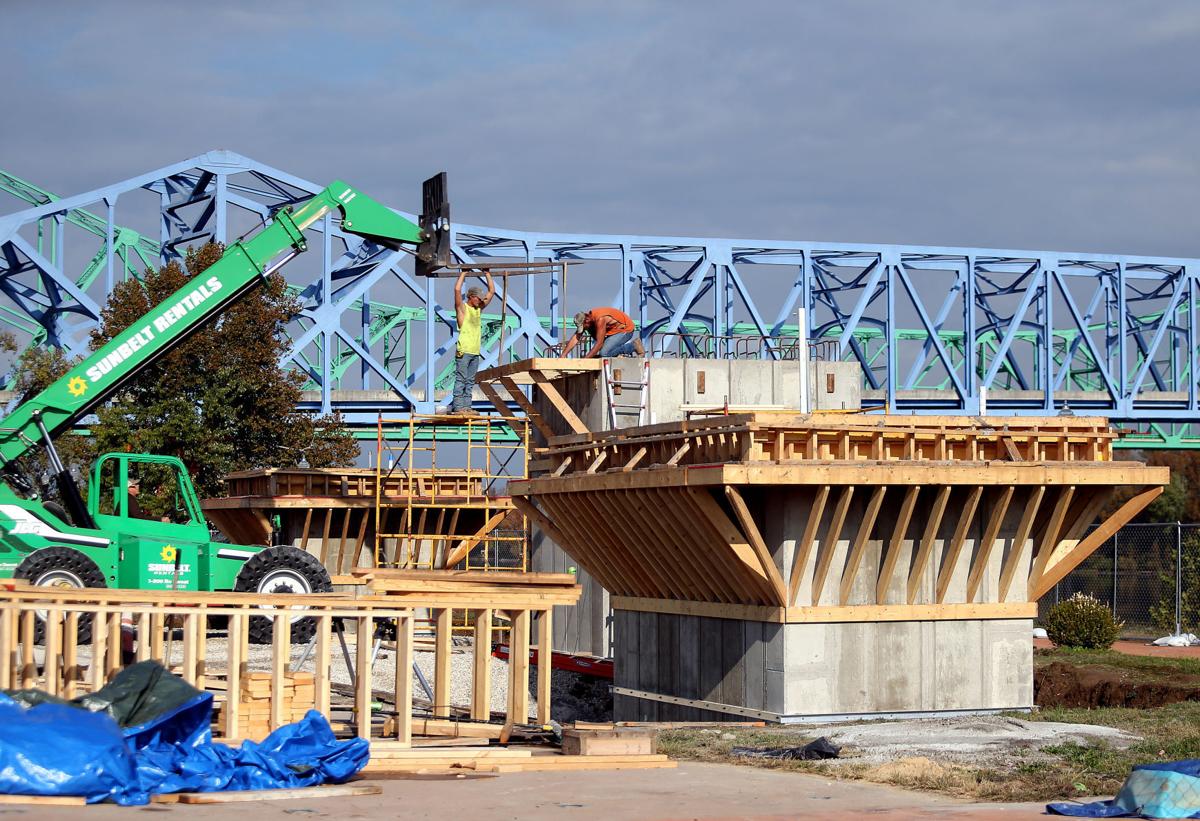 Lori Wolfe/The Herald-Dispatch Workers from McKenzie Concrete continue construction of 3 concrete and marble pedestals Tuesday, Oct. 29, 2019, in Ashland. The pedestals are being costructed to hold 3 bronze sculptures at the Port of Ashland. 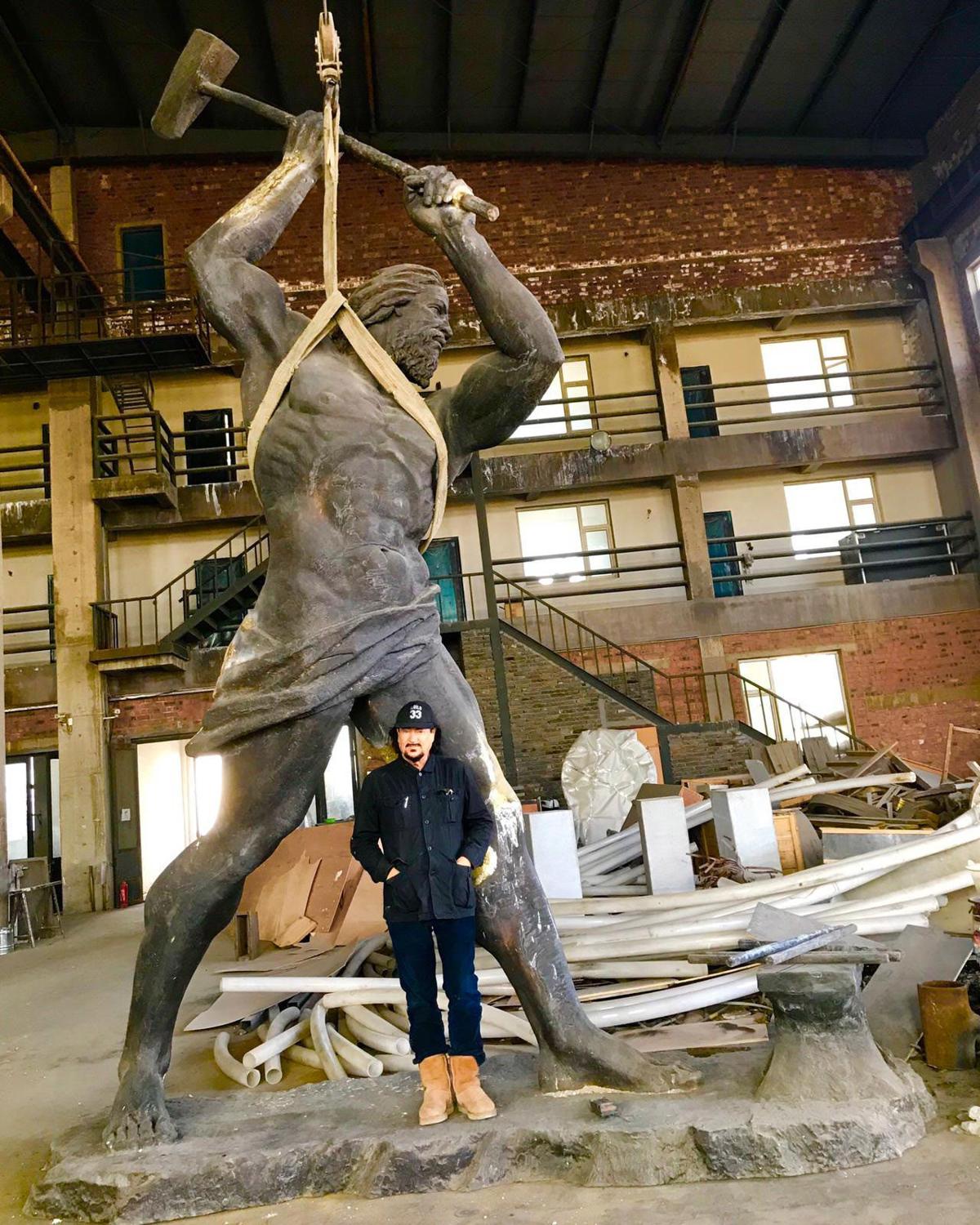 Photo Courtesy of City of Ashland Artist Gines Serran-Pagan stands in front of the sculpture Vulcan prior to it being shipped to Norfolk, Virginia. 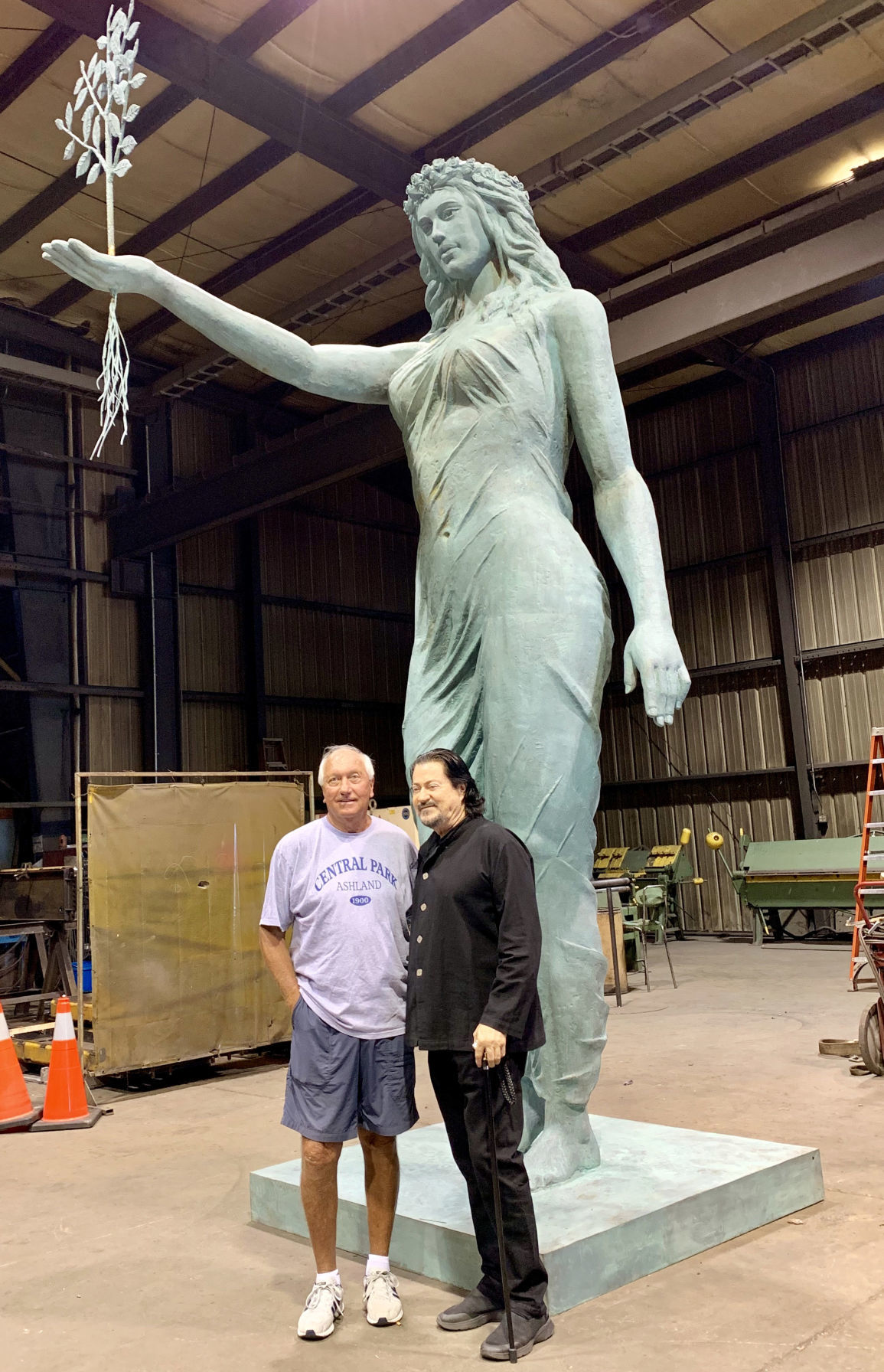 Photo Courtesy of City of Ashland Artist Gines Serran-Pagan stands in front of the sculpture Venus with Ashland Mayor Stephen Gilmore at a warehouse in Ashland.

Lori Wolfe/The Herald-Dispatch Workers from McKenzie Concrete continue construction of 3 concrete and marble pedestals Tuesday, Oct. 29, 2019, in Ashland. The pedestals are being costructed to hold 3 bronze sculptures at the Port of Ashland.

Photo Courtesy of City of Ashland Artist Gines Serran-Pagan stands in front of the sculpture Vulcan prior to it being shipped to Norfolk, Virginia.

Photo Courtesy of City of Ashland Artist Gines Serran-Pagan stands in front of the sculpture Venus with Ashland Mayor Stephen Gilmore at a warehouse in Ashland.

ASHLAND — Ashland will soon be home to the tallest series of sculptures in one place in the nation, according to Ashland Mayor Stephen Gilmore.

Three 32- to 35-feet-tall sculptures named Vulcan, Venus and Genesis have been crafted by world-renowned artist Gines Serran-Pegan, who was born in Spain but has spent most of his life in New York City. They will sit on 10-foot-high pylons on Ashland’s riverfront, according to the mayor.

“These massive works of art are finished and are in the city,” Gilmore told The Herald-Dispatch recently. “We are still doing work on the concrete structures these giant sculptures will sit on, but we are hoping for an unveiling of them during an official ceremony sometime in January 2020.”

Gilmore said these works of art will advance an already strong arts community in Ashland and the entire Tri-State region.

“We believe these artworks advance the city’s artistic offerings and will bring in folks from across the country, and maybe even around the world, to Ashland,” he said.

The mayor said in addition to being the tallest series of sculptures in one place, they are the first to mix traditional and contemporary styles in America.

“This is going to be a major event in the history of Ashland,” Gilmore said.

The project is being totally funded by a generous gift from an anonymous benefactor.

“This project isn’t costing the city anything,” Gilmore said. “I can’t thank our anonymous donor, and artist Gines Serran-Pagan, enough for this wonderful gift to Ashland.”

Gilmore said the project really got its roots after the donor brought Serran-Pagan to Ashland for a visit.

“Gines came to Ashland more than once and he just took to Ashland and how friendly the people here were to him,” he said. “He also commented on how beautiful this area is and how we have obviously taken care of our resources. He admired the parks, the homes, downtown and learned about the history of Armco Steel in Ashland and Ashland Oil as well. I was impressed that he learned so much about our area, our culture and our history.”

Gilmore says Serran-Pagan saw that the people of Ashland are survivors, despite its history of economic ups and downs.

The mayor met Serran-Pagan at a birthday party the anonymous donor was having for his father, who was turning 100 years old.

“He is the kindest person you could ever want to meet,” Gilmore said. “This man is a world-famous artist with sculptures all over the world. He finished a Hercules in Miami recently and is currently working on a 100-foot tall sculpture of Jesus Christ in Manilla in the Philippines.”

Gilmore said the anonymous donor is a native of Ashland whom he has known his entire life.

“I don’t know the exact amount of this gift, but I would estimate it to be in the millions of dollars,” he said. “He still has a home in Ashland, but doesn’t want to be identified at this time.”

Gilmore said the donor is a very humble person.

“He wants it more in his family’s name than his, but understands that at some point we will have to announce who he is when we have a formal unveiling ceremony,” he said.

The largest of the three sculptures is Genesis. Its design is based the five elements of spirit, earth, air, fire and water.

“One of the things the donor did was to take Gines by Paul G. Blazer High School,” the mayor explained. “He saw this design in an old yearbook from the school. Gines later told me that even Michelangelo used that similar design in some of his artwork.”

Gilmore, a retired superintendent of schools and a coach at the high school, said Genesis has an open circle with rods on it.

“These elements are the focal points of the sculpture,” he said. “It will be a statue that you can actually go inside of it and go up in it.”

Gilmore said Genesis has a spiritual significance and represents the strength of Ashland’s faith community.

“It will be up more in the front of the other two sculptures and it will rotate and the rods will be lighted as it rotates,” he said.

Vulcan is the mythical god of metalworking and is depicted hammering on a forge.

“He represents all of the hardworking people of Ashland and the city’s history with metal and steel,” he said.

The third sculpture is of Venus, Vulcan’s wife, the mythical god of love and beauty. She is depicted offering an ash tree.

“She symbolizes the city’s natural beauty and love,” Gilmore said. “She has an ash tree in the palm of her hand with the roots hanging down. She represents the natural beauty of our area and how we have taken care of our environment.”

Gilmore said the three structures were molded with clay then coated in fiberglass.

“Gines bronzed the sculptures and then they were placed in open containers to allow the material to weather on their trip from China,” the mayor said. “It took 40 days to transport them to America and they were picked up in Norfolk, Virginia. Then they were brought by truck to Ashland and placed in storage.”

Gilmore said that city officials are planning an event at the Paramount in downtown Ashland to showcase the work of the artist and show video and photographs of work on the three sculptures. Sometime after that an unveiling ceremony will take place for the public at the riverfront.

“The reaction from the community has been overwhelmingly positive,” he said. “We will have a major installment from a world renowned artist right here in Ashland. Motorists will be able to see these sculptures as they get close to Ashland from Huntington on U.S. 52 in Ohio. We believe this is going to be a one-of-a-kind tourist attraction that will draw folks from across the country and around the world to Ashland.”