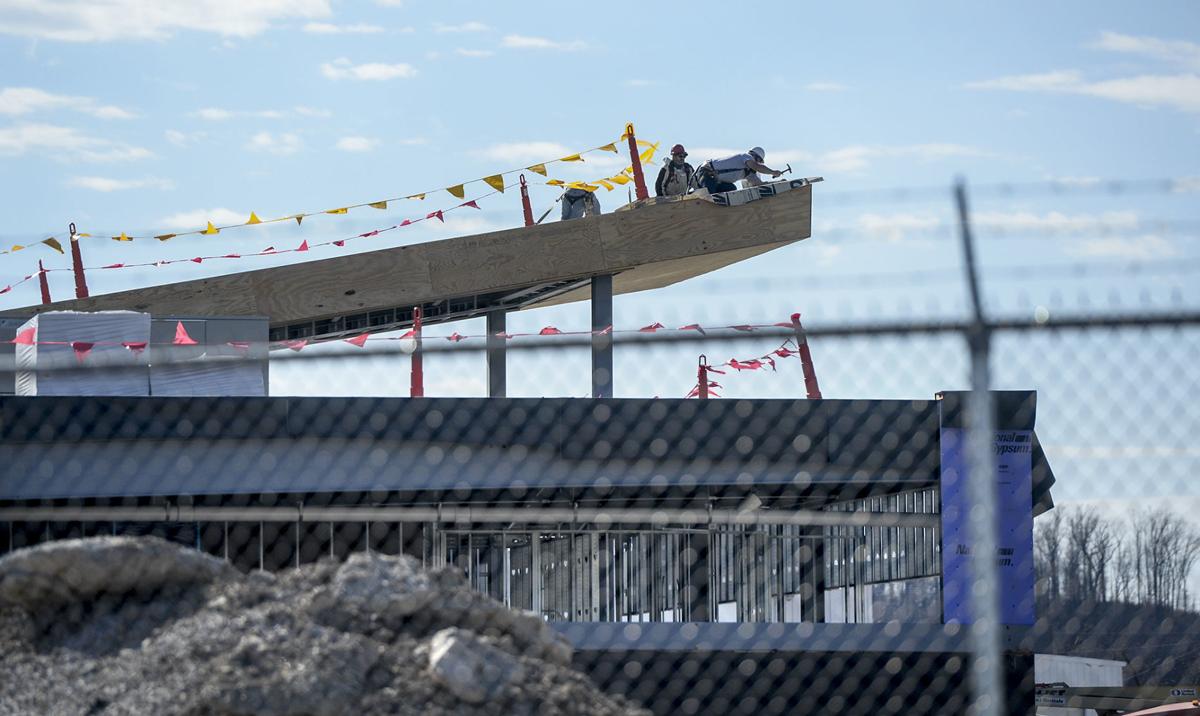 Construction crews work on the roof of the classroom building for the Marshall University School of Aviation under construction at Yeager Airport in Charleston. 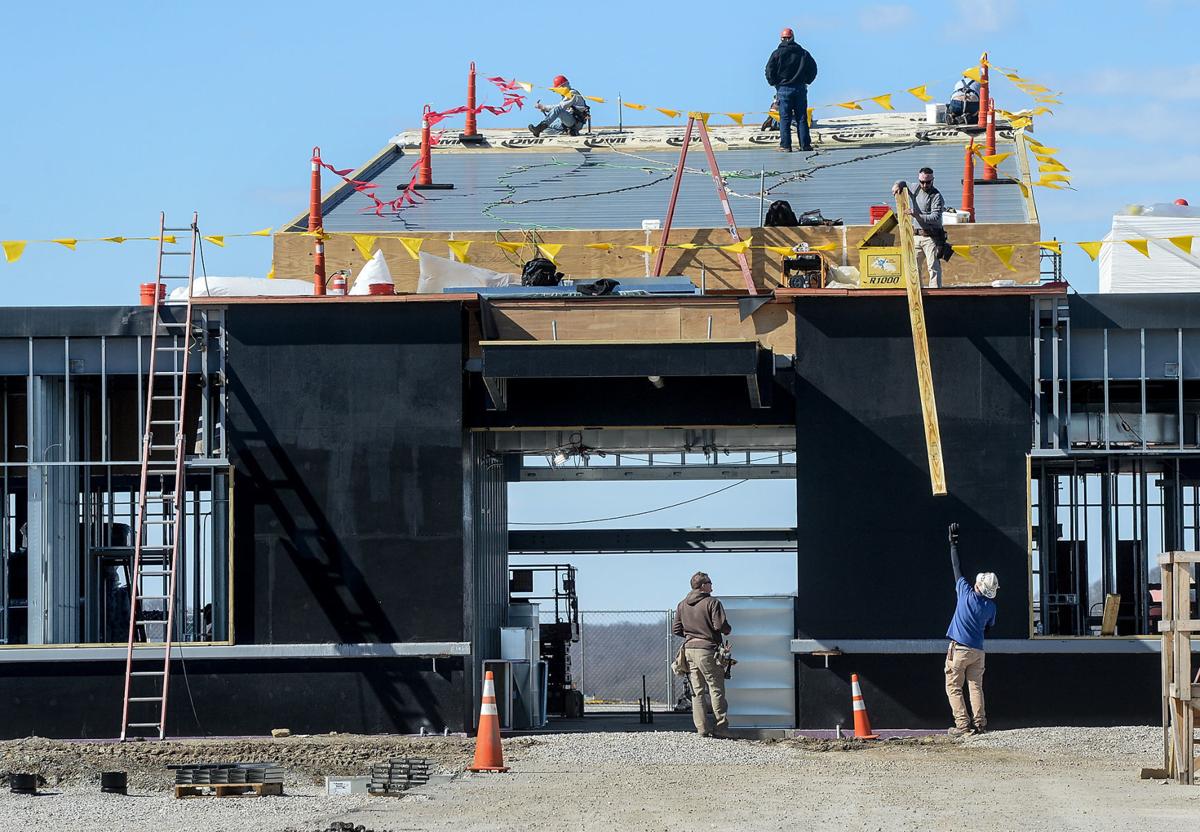 The classroom building for Marshall University’s School of Aviation remains under construction at Yeager Airport. 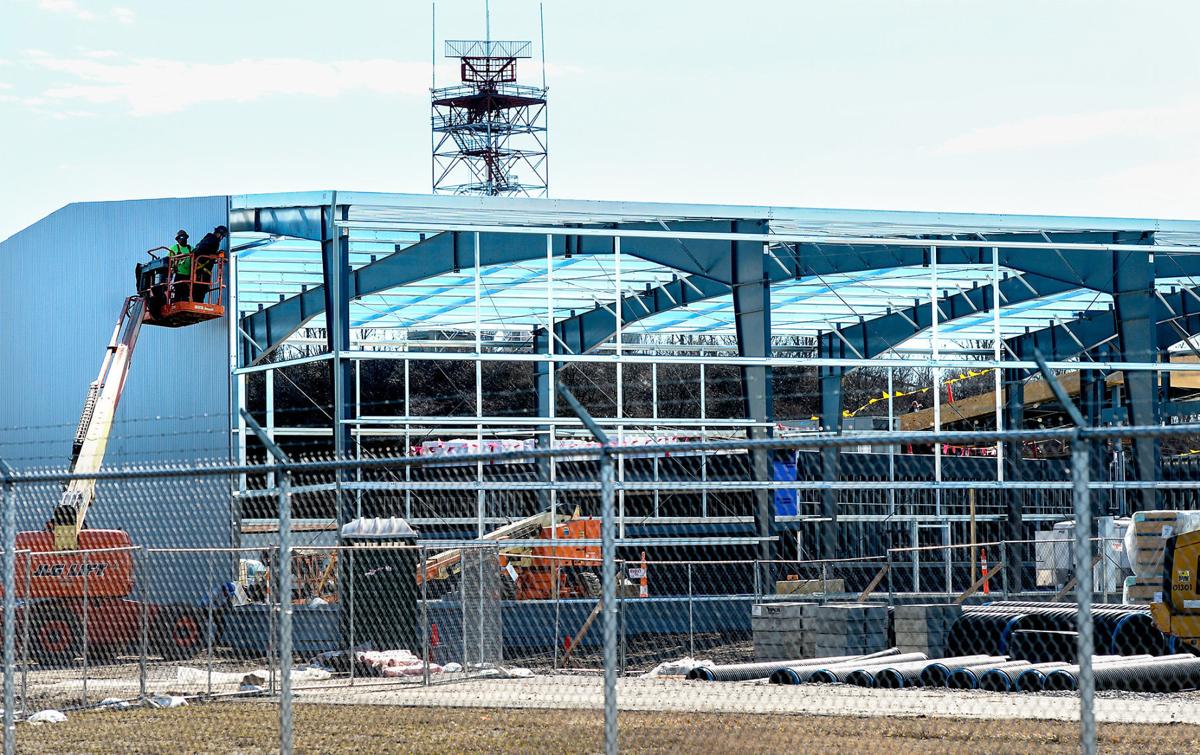 The hangar for Marshall University’s School of Aviation remains under construction at Yeager Airport.

Construction crews work on the roof of the classroom building for the Marshall University School of Aviation under construction at Yeager Airport in Charleston.

The classroom building for Marshall University’s School of Aviation remains under construction at Yeager Airport.

The hangar for Marshall University’s School of Aviation remains under construction at Yeager Airport.

CHARLESTON — The construction site for Marshall University’s new Bill Noe Flight School has been a beehive of activity in recent days.

Workers taking advantage of warmer, drier weather have been putting the finishing touches to the roof of the flight school’s 10,500-square-foot classroom building, taking shape along Taxiway B at Yeager Airport’s general aviation area.

Inside, others are busy wiring, plumbing and drywalling the building, installing its heating and ventilation ducts, and beginning brickwork on exterior walls. Nearby, another crew is installing exterior wall panels to the metal frame of the flight school’s 12,000-square-foot hangar.

Work began on the $6.79 million project six months ago, and six months remain for all work to be complete in time for its first students to begin their initial semester of instruction here on the way to earning commercial pilot bachelor of science degrees.

“I’m confident that when Monday of the first week of classes arrives (on Aug. 23), the doors will be open and our first group of young folks will be walking in with smiles on their faces,” said Bryan Branham, the flight school’s director and chief flight instructor.

Up to 50 students will make up the freshman class of the flight school, named in honor of Marshall alumnus Bill Noe, who went on to become the chief operating officer of NetJets International, the world’s largest private jet service. When students representing all four years of the program are at the flight school, total enrollment will be about 200.

The program has already attracted more than double the number of applications for which there are openings, Branham said.

“There’s been a lot of interest,” he said.

Prospective students like the idea of receiving the training and certification needed to become a commercial pilot, since demand for the profession is strong and growing, with median salaries now more than $147,000 for airline pilots and $86,000 for other commercial aviators. Earning a four-year college degree in addition to a commercial pilot’s rating opens further opportunities in management or education.

Those admitted to the program must first meet Marshall’s general undergraduate enrollment standards, plus additional requirements from the flight school in addition to obtaining Federal Aviation Administration first- or second-class medical certificates.

For those admitted to the flight school, all classes will be held either in the new classroom building taking shape at Yeager Airport or at Marshall’s South Charleston campus.

“There may also be some remote learning possibilities, too, but no one is going to have to be driving between the flight school and the main campus in Huntington” to complete the program, Branham said.

The hangar will house the flight school’s two new Cirrus SR20 single-engine airplanes, which operate with “technology very similar to that being used right now in the airline industry,” according to Branham.

The aircraft’s side-stick control yoke follows current trends in commercial aircraft cockpit design, as does its center-mounted flight management system keypad and advanced avionics arrangement. Safety features include pilot and co-pilot airbags and a parachute capable of bringing the aircraft to a safe landing in event of an emergency.

“In their first week here, students could very well be taking their first orientation flights,” he said.

Before joining Marshall’s faculty in August, Branham directed Ohio University’s flight school program. He is a former Army aviator, with experience in both helicopter and fixed-wing flight.