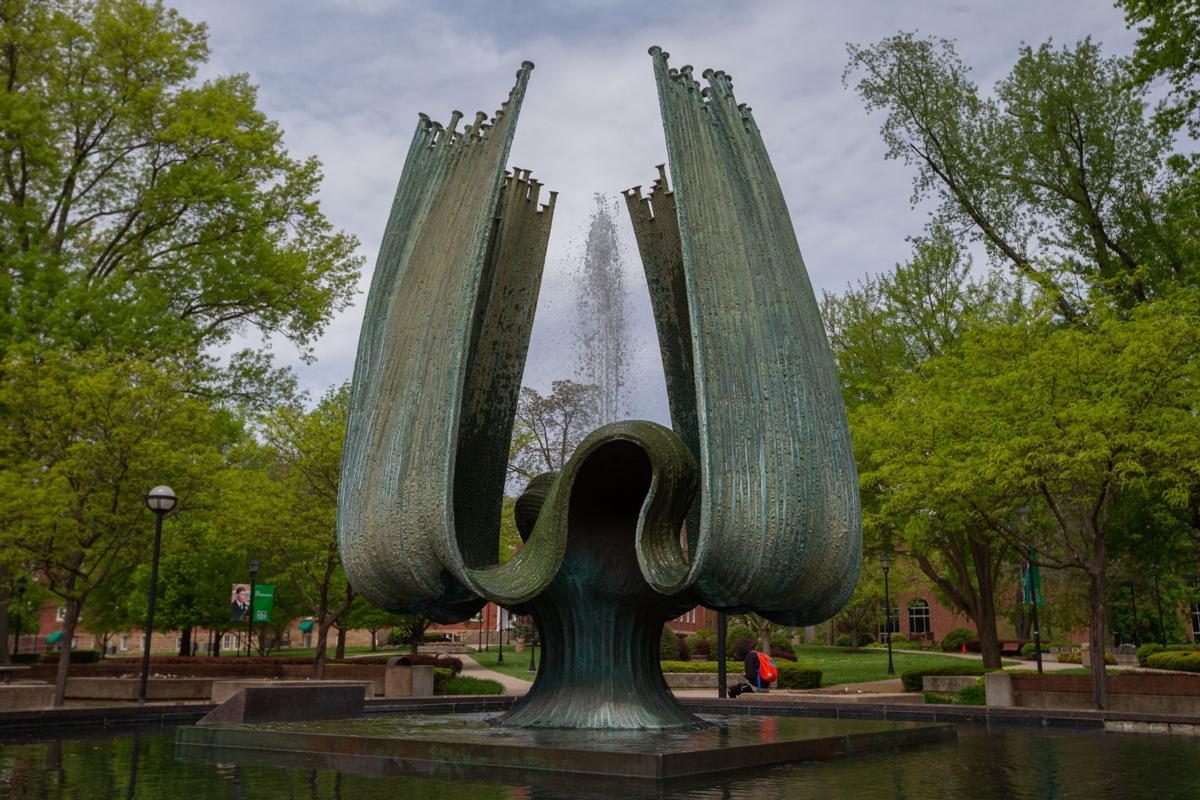 The Marshall University Memorial Fountain is pictured in Huntington. 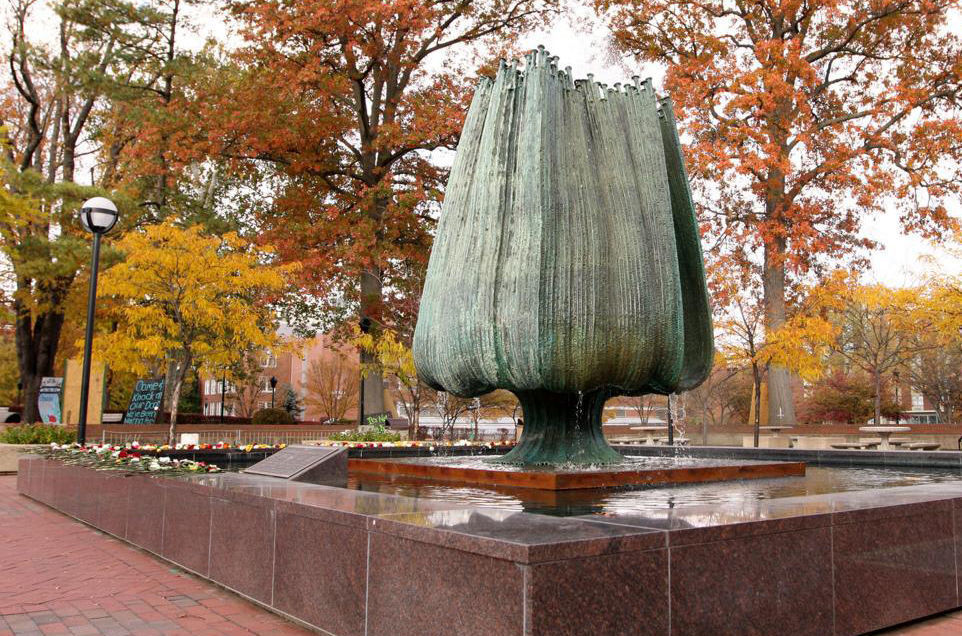 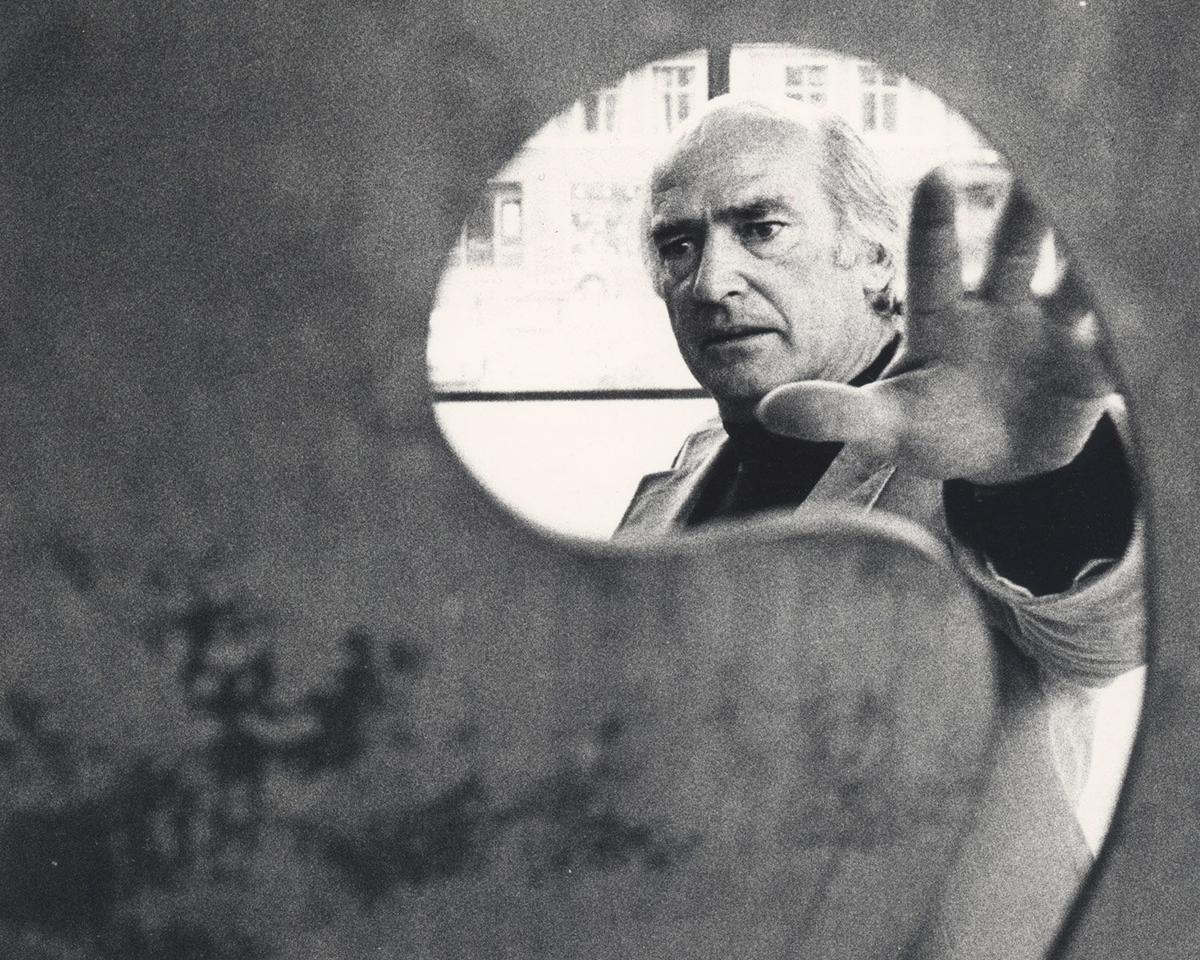 The Marshall University Memorial Fountain is pictured in Huntington.

HUNTINGTON — Just outside the Memorial Student Center at the heart of the Marshall University campus stands the Memorial Fountain — a visible reminder of the 75 lives lost in the Nov. 14, 1970, plane crash.

More than 13 feet high and weighing 6,500 pounds, the Memorial Fountain was created by famed sculptor Harry Bertoia. In observance of the 50th anniversary of the plane crash, the Huntington Museum of Art (HMA) has assembled an exhibit that explores the work of the memorial’s creator.

“Rising, Renewing, Reaching: Harry Bertoia and the Marshall University Memorial Fountain” will open Sept. 19 and continue through Jan. 3, 2021. The exhibit displays a range of the multi-talented Bertoia’s work, including his iconic furniture designs, as well as jewelry, prints and sculpture, with a focus on his work on the MU fountain. A collection of Memorial Fountain photographs by David Pittenger is also on view at the museum.

“HMA is honored that Celia Bertoia, the daughter of the artist, will be visiting HMA and Marshall University this fall to observe the 50th anniversary of the plane crash,” said HMA Executive Director Geoffrey K. Fleming.

She is tentatively scheduled to present the Dr. Lawrence B. and Shirley Gang Memorial Lecture at HMA on Nov. 13 from 5 to 7 p.m. However, the COVID-19 pandemic could force her lecture to be presented virtually.

“The choice of Bertoia as the designer of the memorial to mark the Marshall tragedy is an interesting case study in the often-contentious process of determining what constitutes a proper symbol for public memory,” said HMA senior curator Chris Hatten.

Soon after the tragic event occurred, acting Marshall University President Donald Dedmon appointed a committee to decide on a memorial for the victims. Several ideas were discussed, including proposals to feature football players or a bison as part of the memorial’s motif.

Architect Keith Dean, who had designed the Marshall Student Center on campus, suggested Bertoia as a candidate to create the memorial sculpture. Bertoia had been recommended to Dean by HMA Director Roberta Emerson.

“An emotional debate occurred, centered upon whether an abstract work of art could properly commemorate the tragic loss of life,” Hatten said.

Some condemned the choice of a “surrealist” artist and questioned whether the work was a tribute to “flower children” or football players. Nevertheless, the committee, headed by Huntington businessman Lake Polan Jr., voted 5-4 to commission Bertoia to create the memorial.

“Once the Memorial Fountain was installed and dedicated, public sentiment swung in favor of the work and it has since become a beloved symbol of the university,” Hatten said.

Included in the HMA exhibit is the maquette for the fountain, the artist’s small preliminary model of his sculpture design. The maquette is part of the museum’s permanent collection, donated by the Marshall Foundation.

When it was finished, the sculpture — fashioned from bronze, copper tubing and welding rods that sweep toward the sky — was trucked to Huntington on a flatbed trailer from Bertoia’s home in Barto, Pennsylvania. A crane moved it into place in the middle of the fountain on Oct. 18, 1972, nearly a month before the dedication. A wooden structure surrounded it while plumbing and electrical work was completed.

Speaking at the dedication ceremony Nov. 12, 1972, Bertoia voiced a hope that the memorial would “commemorate the living — rather than death — on the waters of life, rising, receding, surging so as to express upward growth, immortality and eternity.”

Each year, a memorial service is held on the anniversary of the plane crash. The ceremony includes the traditional laying of a wreath and the fountain’s water is turned off until the following spring.

A prolific and versatile artist, Bertoia was internationally famous before his creation of the Marshall memorial. He was, by turns, a metal crafter, jewelry maker, graphic artist, furniture designer and sculptor, who pioneered what’s sometimes called “sight and sound” sculpture.

Bertoia (1915-1978) was born in Italy. At age 15, he traveled to Detroit to visit his brother and decided to stay to study. When he finished high school, he studied at the Capital Society of Arts and Crafts in Detroit and at the Cranbrook Academy of Art in Bloomfield Hills, Michigan. He later taught metal crafts at Bloomfield Hills. When World War II made metal a rare and expensive commodity, he turned to jewelry making. Later, he would work as a graphic artist.

In 1950, Bertoia moved to Pennsylvania where he began work with Hans and Florence Knoll. He designed five wire furniture pieces for Knoll that proved commercially successful and are now looked on as classics of modern furniture design.

In the 1960s, he began experimenting with sounding sculptures, composed of tall, vertical rods on flat bases. When activated by hand or by air currents, they emit musical sounds. In 1970, “Wheat Field,” a bronze sounding sculpture by Bertoia, was acquired by HMA with a grant from the National Endowment for the Arts and a matching gift from local businessman and longtime art lover Alex Booth.

Bertoia used his sounding sculptures to produce a series of phonograph albums he called “Sonambient.” Visitors to the HMA exhibit will hear one of the albums being played, Hatten said.

HMA’s Bertoia exhibit is presented by the Polan Family in Memory of Dorothy and Lake Polan Jr., with support from The Isabelle Gwynn and Robert Daine Exhibition Endowment. Financial assistance for the exhibit has also been provided by the West Virginia Department of Arts, Culture and History, and the National Endowment for the Arts, with approval from the West Virginia Commission on the Arts.