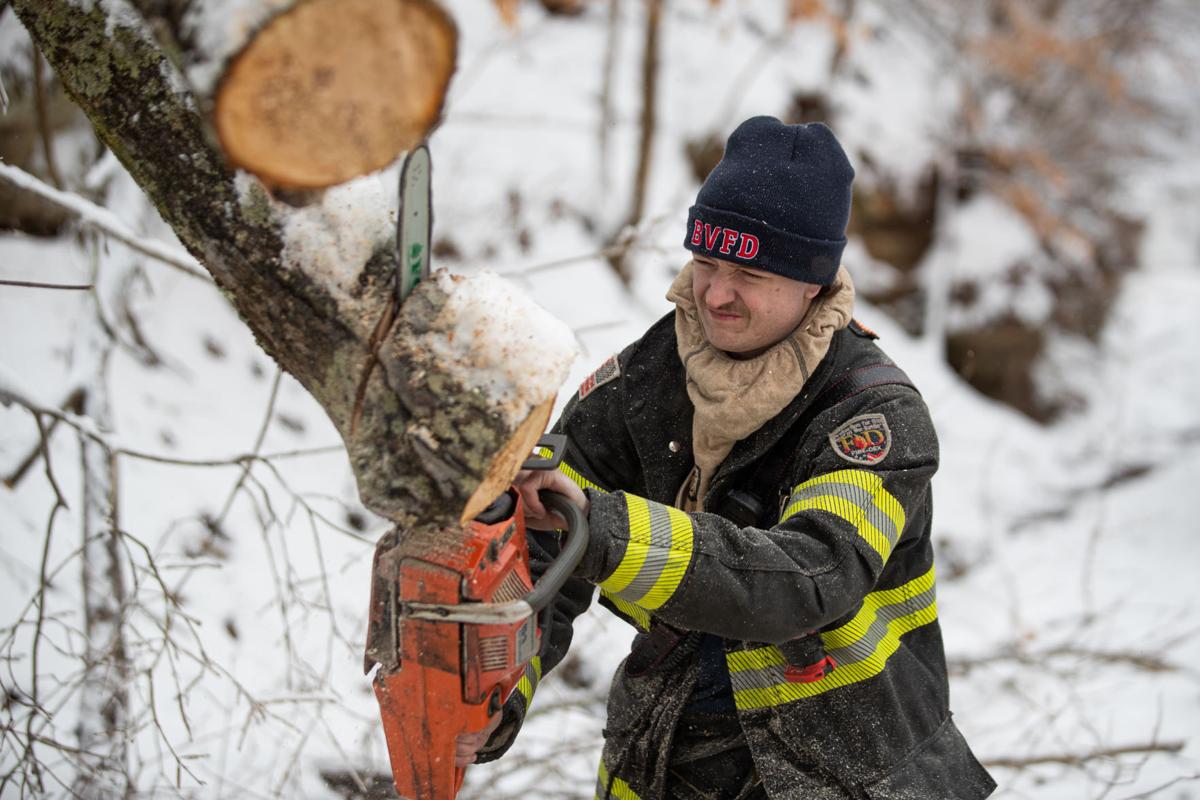 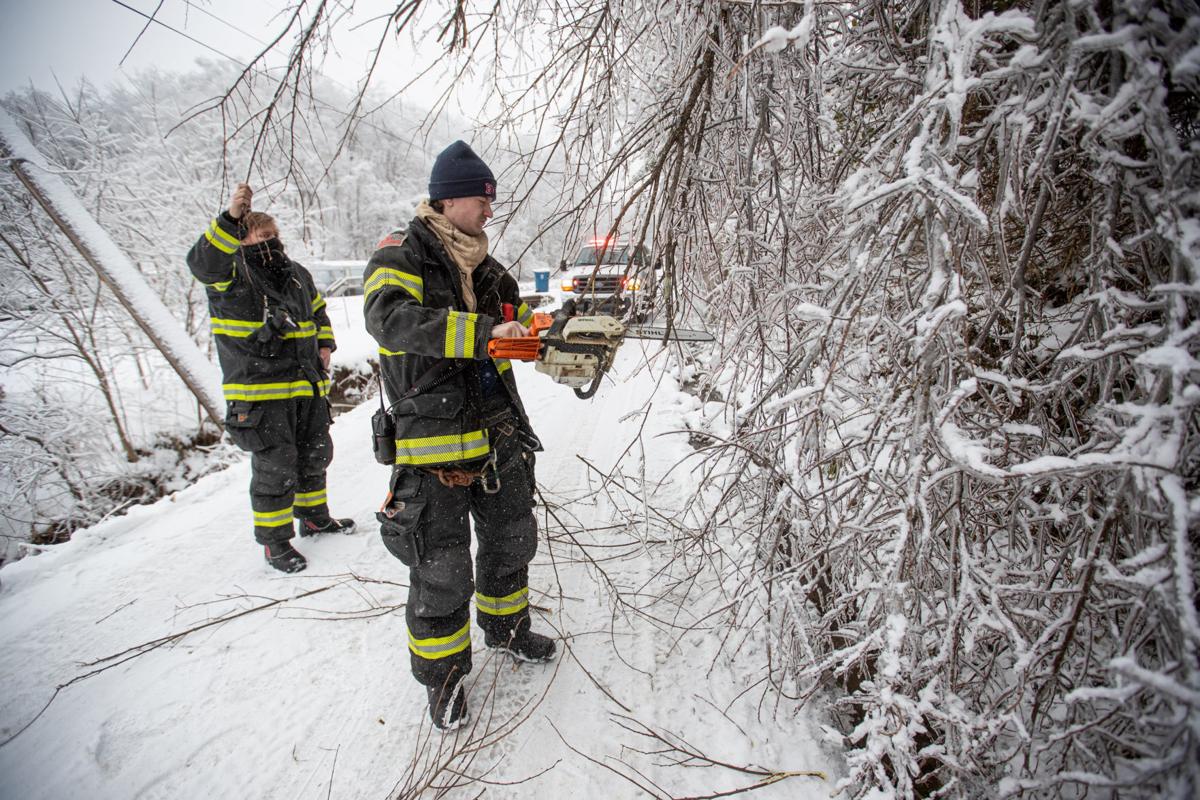 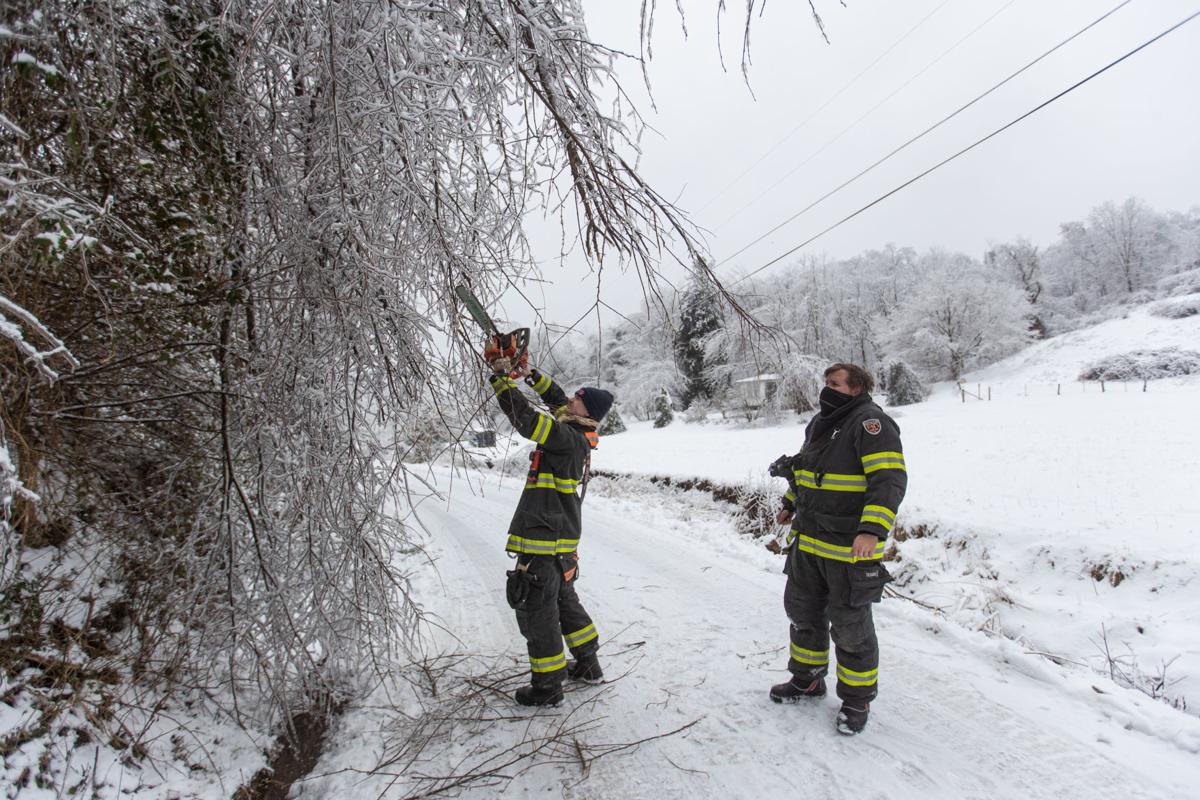 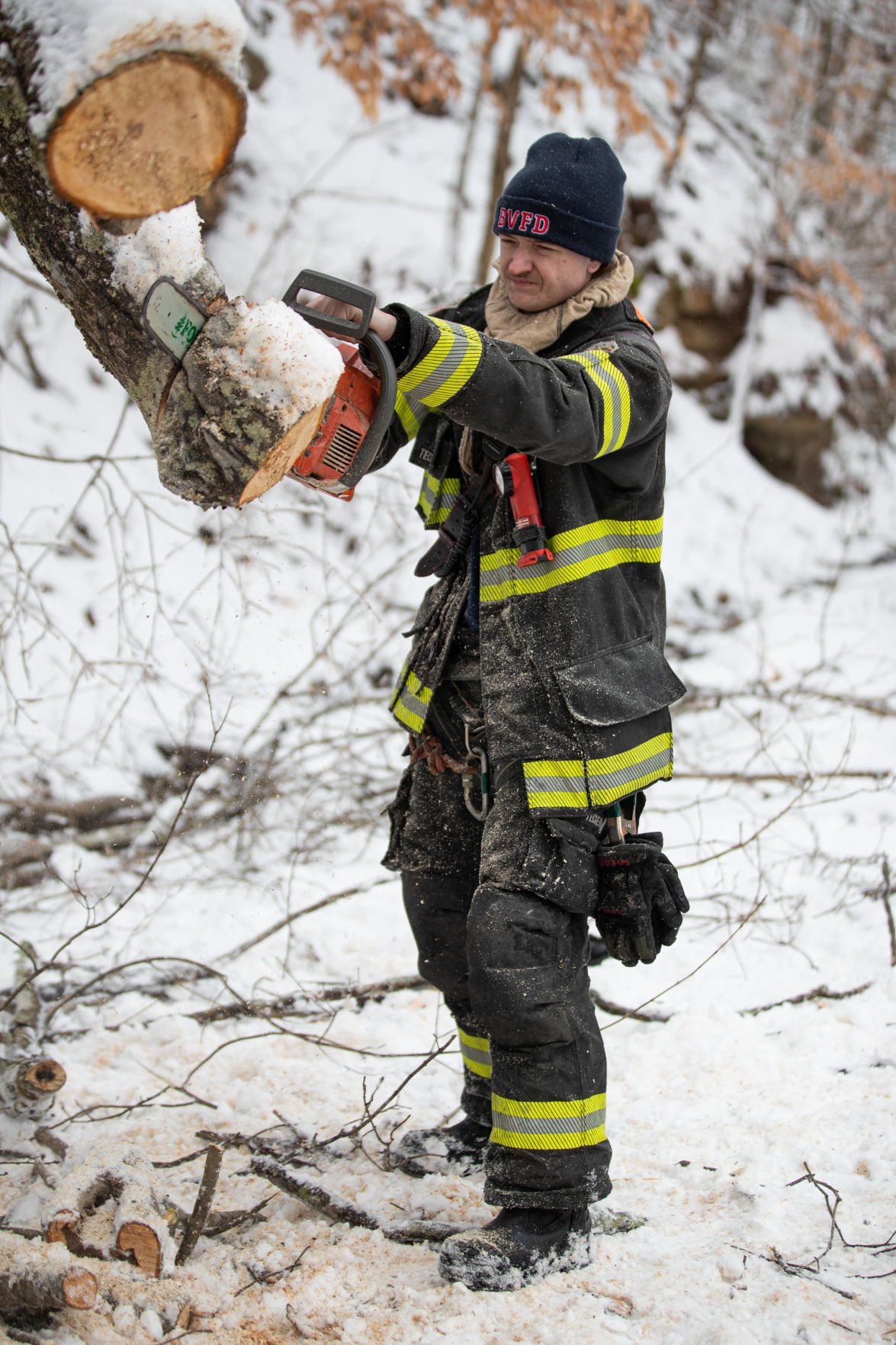 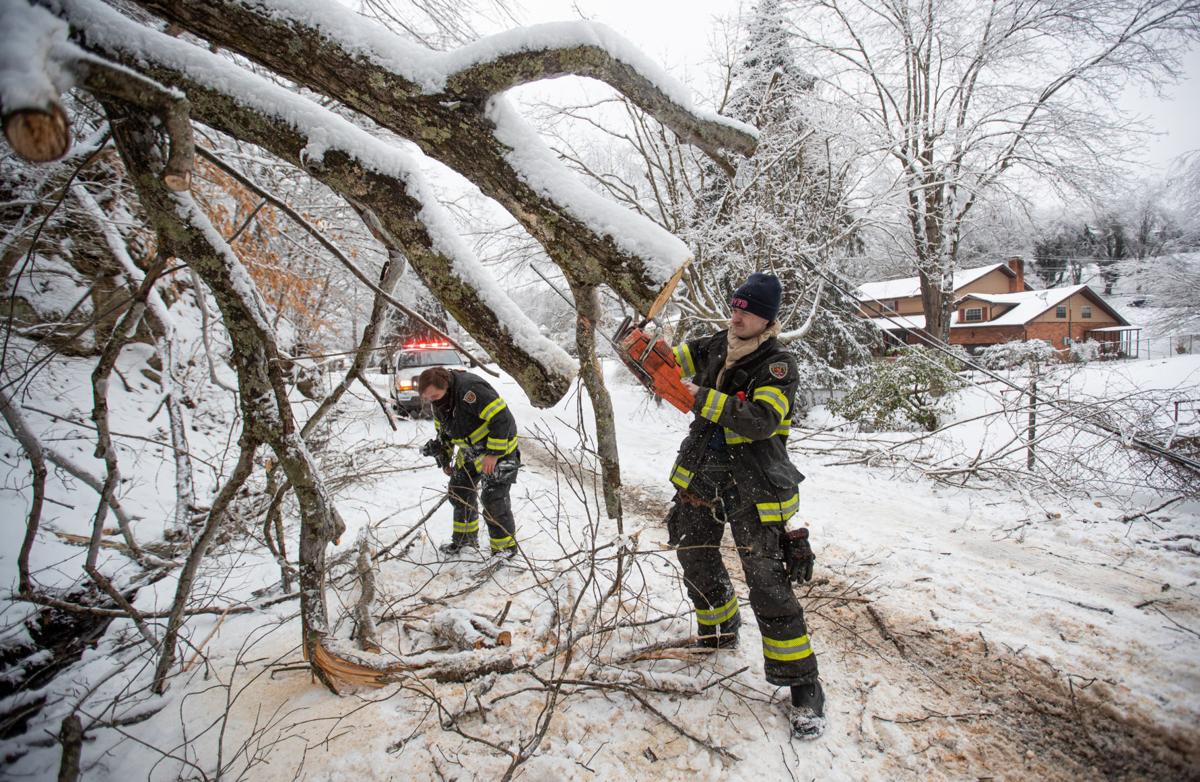 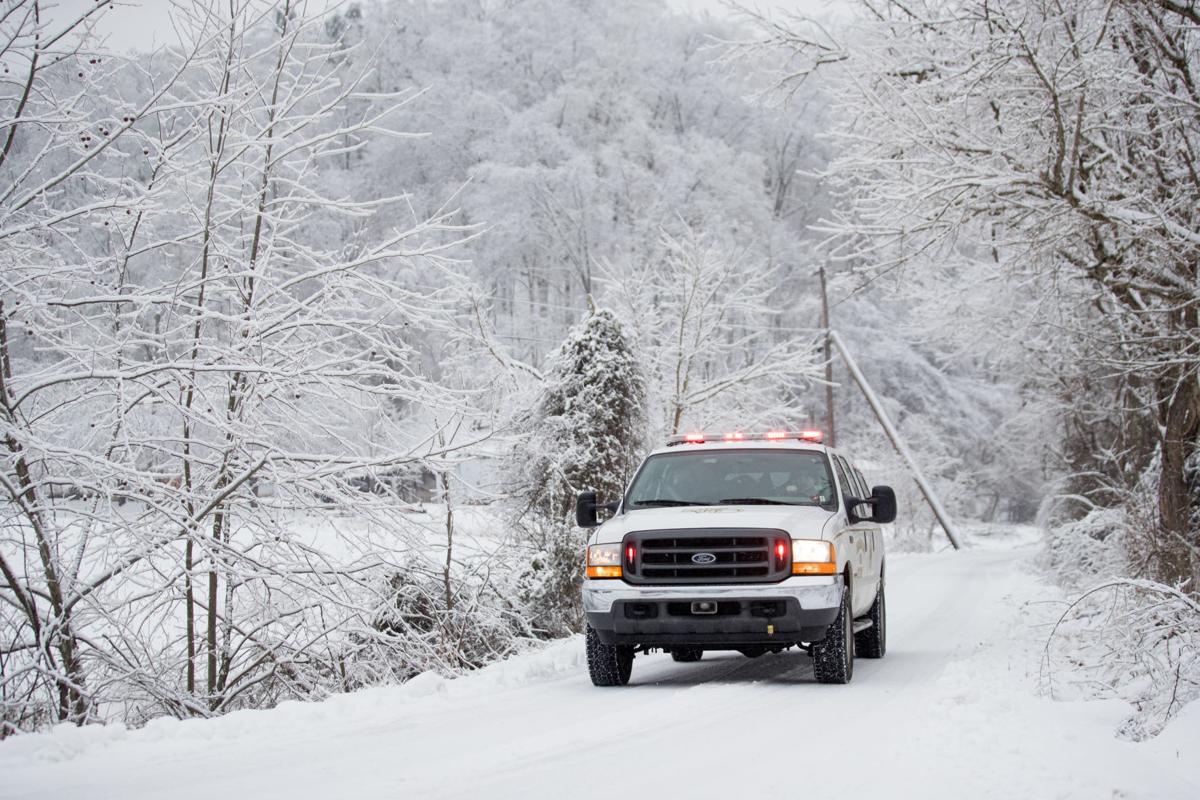 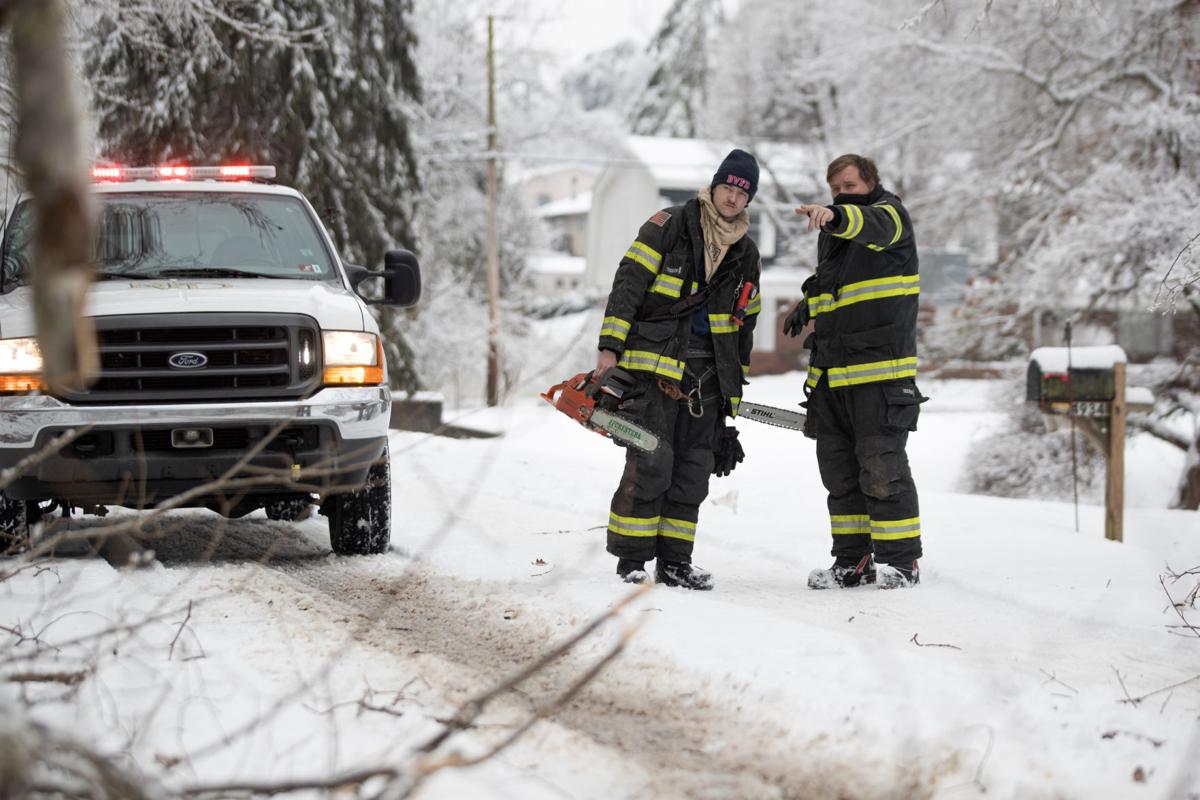 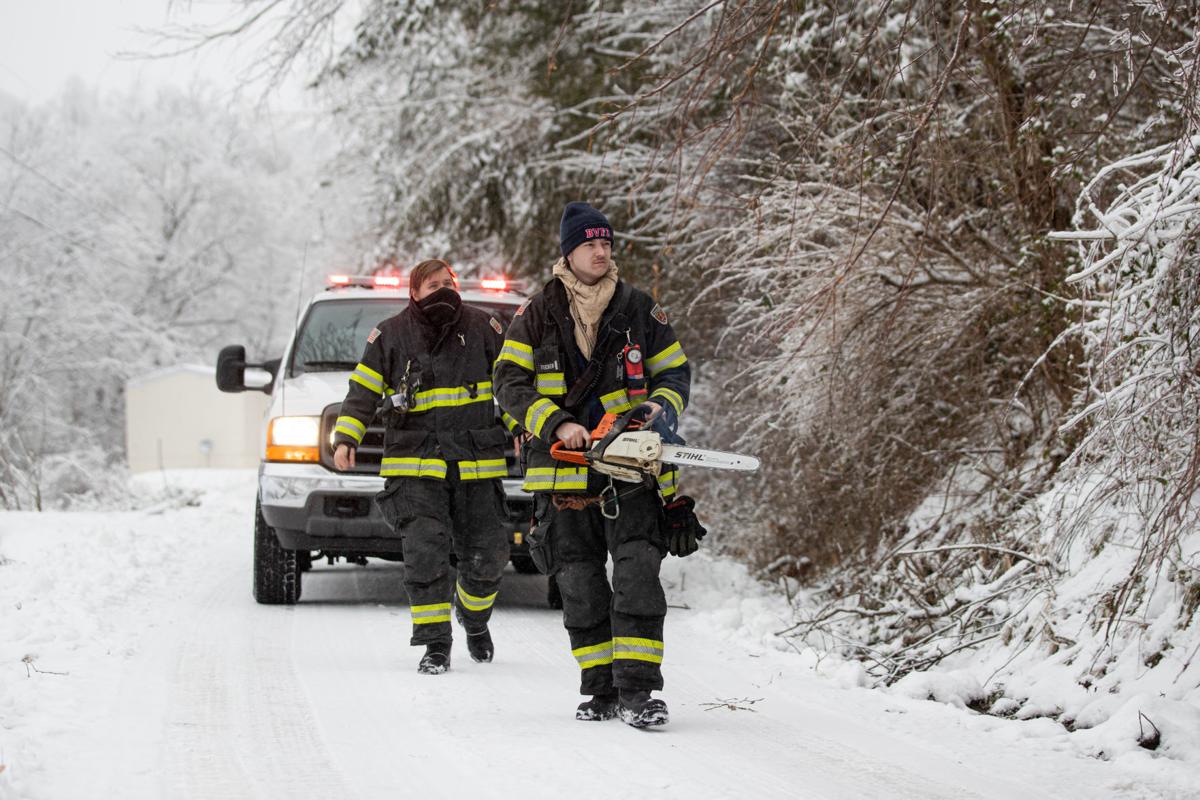 BARBOURSVILLE — A firefighter is always on duty, so it wasn’t out of the ordinary when Charlie Fields, deputy chief of the Ohio River Road Volunteer Fire Department, jumped into action to help others who had crashed after wrecking his own vehicle on the icy Big Ben Bowen Highway outside Barboursville last Sunday.

What was surprising for Fields was when, minutes later, a truck traveling an estimated 40 mph crashed into a vehicle he was standing outside of while helping its occupants.

The call was one of more than 550 that Cabell County volunteer fire departments have responded to in the nine days following the first winter storm to hit the area late Feb. 10.

Barboursville Volunteer Fire Department Deputy Chief Andrew Frazier said the number of calls the departments have responded to is the highest they’ve seen. For Barboursville VFD, it’s higher than the number that followed the derecho of 2012 or the snowstorm brought by Hurricane Sandy later that same year.

With thousands of Cabell County residents still without power, the end is nowhere in sight for first responders, who are experiencing their own personal hardships at home. But dedication to their volunteer work helps them persevere, Fields said.

The crash and aftermath

Fields said he first realized there was a problem on the road about three-quarters of the way down when he saw headlights facing him as he reached the crest of a hill.

“As I was finding out what happened, I just happened to look up and I saw this car come over the hill faster than he should have been doing,” he said. “I’m thinking he must have hit his brakes, because he started sliding sideways.”

The driver of the vehicle was not from West Virginia and was not used to driving in icy conditions, Fields said. He told the occupants to brace themselves and did the first thing he could think of — jump on the car’s hood. While he was thrown off and hurt, it might have saved him from being pinned or run over. He said he had no regrets in his decision.

Even after that happened, he was trying to help the others involved.

“It’s in your blood. Once it gets there, it’s hard to not continue going,” he said. “Once we are there, we are there to help people and protect them. We don’t remember we have to check on and take care of ourselves.”

He has continued his duties since.

On Wednesday afternoon, a woman posted on social media concerns for her hilltop neighbors whose driveway was covered in trees downed by recent storms. Within minutes, Frazier responded by sending a crew to check on the residents and offered to help clear the driveway.

Frazier said it’s calls like that that can mean the difference between life and death.

“The guys are tired, but then you see a message like that and you speak up and say, ‘I need two or three people to go there’ and there’s no hesitation,” he said. “They just step up to the plate and try to get it done.”

Several members have been living at their home stations with their family because of outages at home. Some departments, like Ona, are without electric and are running on a generator. While suffering their own hardships, the members are still responding, Frazier said.

“We really haven’t had a problem. We’ve had a good turnout with our members, and other departments have as well,” he said, “which is great, because that means you can start handling multiple calls at the same time.”

Fields is one of those they have helped. His fellow firefighters came to help him get his generator going when he was unable to because of his condition after the wreck. He is now doing the same for others.

The seven VFDs for Cabell County responded to an estimated 581 to 646 calls from Feb. 10 to the early morning of Feb. 19 — loosely about 20% to 25% of the number of calls the departments have averaged together in years past.

The calls range from checking for downed power lines, to cutting down trees, clearing roads or any weather-related needs. They also must respond to the typical calls, such as reported fires or car wrecks.

Salt Rock has been in the field 50 times for the storm, while it averages around 125 calls in a year. Ona has responded to 55 to 60 calls, about one-third of the 175 to 200 they average a year. In eastern Cabell County, Milton has responded to 71 storm-related calls compared to 600 average calls a year. Culloden has been on 20 to 30 calls when it averages 120 a year.

Fields said the work is overwhelming.

“It’s been nonstop cutting trees,” he said. “No sooner than when they get trees cut, on the way out they are getting trees cut again.”

Both Frazier and Fields agreed the most eerie situation was hearing trees crackling and falling around them as they attempted to clear roads. Fields said the volunteers could cut down trees trying to get to a house and have to cut more just to go back the way they came.

Frazier said in the darkness it was hard to tell if one would hit you. One day crews were on Blue Sulphur Road clearing the area when they got in a situation where the chain saw chain broke and trees were falling around them. Another crew had to get to them so they could drive to safety, he said.

“It looks like a war zone out there when you go down some of these roads,” he said. “Everyone is out there putting 150% in as far as getting these trees removed. Sometimes we can only do so much because we are restricted (in some situations).”

Downed power lines and other hazards slow them down.

As the storms move away and the departments start to catch up on work, the members are hoping they can get back to normal, or whatever normal is with the ongoing COVID-19 pandemic.

Frazier said the focus is now helping the power company, other utility companies and contractors in any way they can.

“We know it’s rough and everybody has gone through it throughout the storm, but please have patience. They will get everything turned back on,” he said.

He said it’s crucial no one be on roads during storms like what were seen last week. He also warned people should stay away from downed power lines or anything that might seem out of the ordinary.

“I know all the fire departments felt when they were trying to access the situation and cut trees down, there was just so much unnecessary traffic on the roads. That causes a whole other problem,” he said.

Even with the few people making it harder, seeing the community give back helps, Frazier said. Businesses have dropped off food and residents have jumped in and worked alongside the VFD crews to help do the work.

Frazier said the little things like those matter tremendously.

“The guys are tired, but then you see a message like that and you speak up and say I need two or three people to go there and there’s no hesitation. They just step up to the plate and try to get it done."-- Andrew Frazier, Barboursville Volunteer Fire Department deputy chief