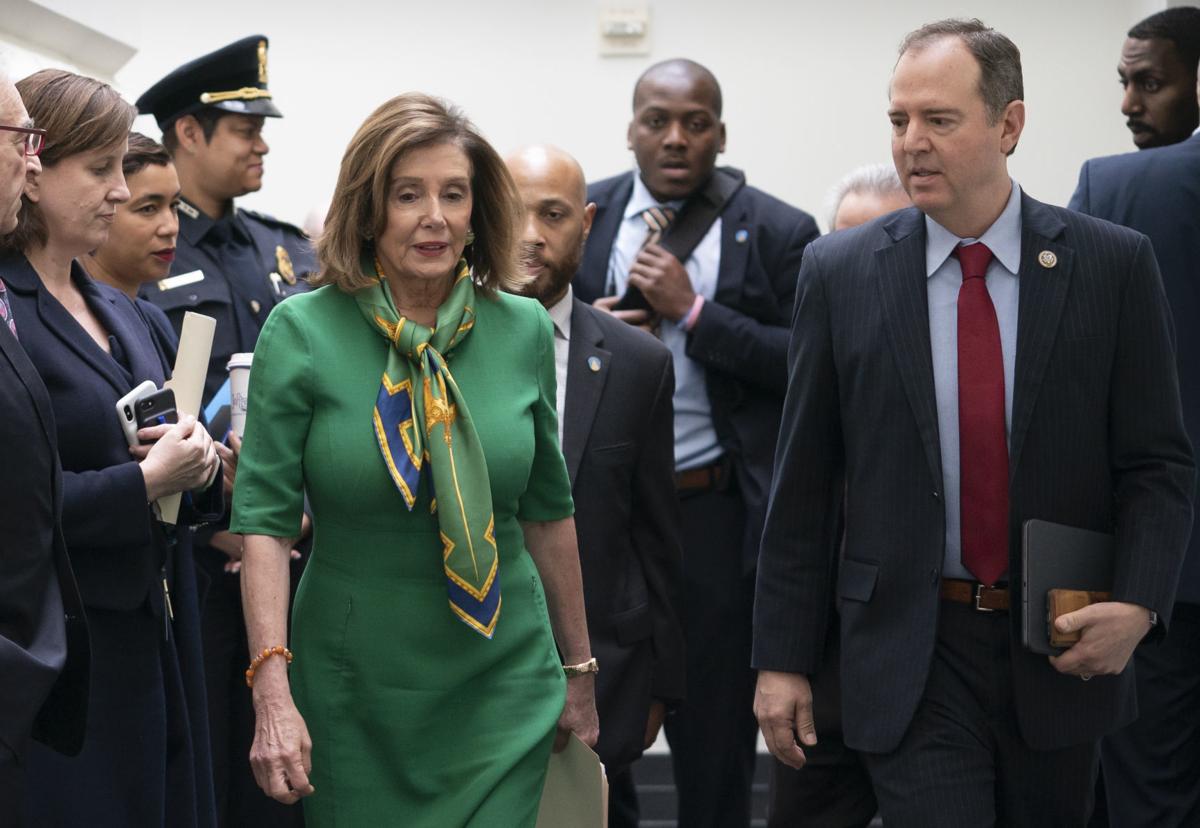 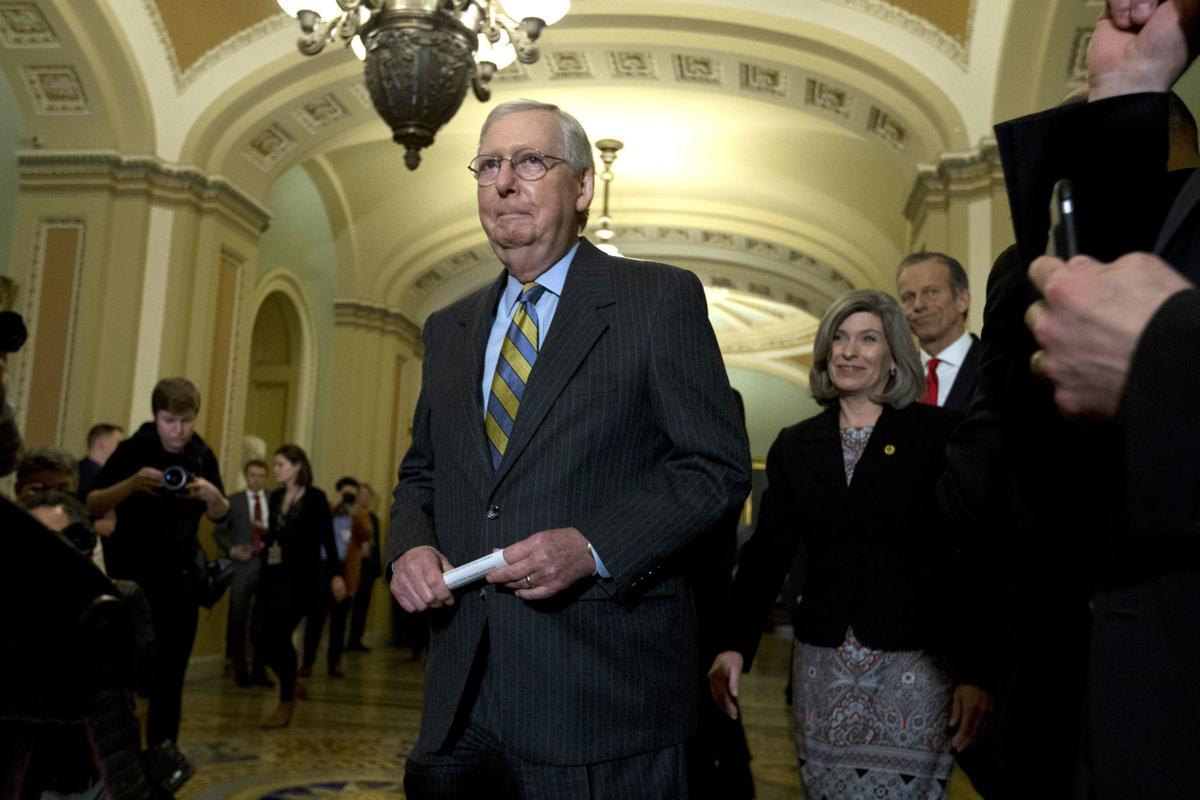 Senate Majority Leader Mitch McConnell, R-Ky., talks with reporters as he walks outside the Senate chamber on Capitol Hill in Washington on Tuesday, Jan. 14, 2020.

Senate Majority Leader Mitch McConnell, R-Ky., talks with reporters as he walks outside the Senate chamber on Capitol Hill in Washington on Tuesday, Jan. 14, 2020.

WASHINGTON — The U.S. House is set to vote Wednesday to send the articles of impeachment against President Donald Trump to the Senate for a landmark trial on whether the charges of abuse of power and obstruction of Congress are grounds for removal.

Speaker of the House Nancy Pelosi announced the next steps after meeting privately with House Democrats at the Capitol, ending her blockade Tuesday a month after they voted to impeach Trump.

It will be only the third presidential impeachment trial in American history, a serious moment coming amid the backdrop of a politically divided nation and an election year.

“The president and the senators will be held accountable,” Pelosi said in a statement. “The American people deserve the truth, and the Constitution demands a trial.”

The Senate is expected to transform into an impeachment court as early as Thursday. The Constitution calls for the chief justice to preside over senators, who serve as jurors, to swear an oath to deliver “impartial justice.” The House managers will walk the articles across the Capitol in a dramatic procession Wednesday evening after the midday vote.

Senate Majority Leader Mitch McConnell said Tuesday the chief justice would open the trial this week, but that the significant proceedings would launch next Tuesday, after the Martin Luther King Jr. holiday.

McConnell met behind closed doors Tuesday with GOP senators who are under pressure from Democrats to call new witnesses and testimony. He urged them to hold together on the next steps, according to a person unauthorized to discuss the private session and granted anonymity.

Late Tuesday, House investigators announced they were turning over a “trove” of new records of phone calls, text messages and other information from Lev Parnas, an associate of Trump lawyer Rudy Giuliani. Intelligence Committee Chairman Adam Schiff said the information shows Trump’s effort “to coerce Ukraine into helping the president’s re-election campaign.” He said this and other new testimony must be included in the Senate trial.

McConnell, who is negotiating rules for the trial proceedings, said all 53 GOP senators are on board with his plan to start the session and consider the issue of witnesses later.

Senate Republicans also signaled they would reject the idea of simply voting to dismiss the articles of impeachment against Trump, as the president has suggested. McConnell agreed he does not have the votes to do that.

“There is little or no sentiment in the Republican conference for a motion to dismiss,” McConnell said. “Our members feel we have an obligation to listen to the arguments.”

In fact, a mounting number of senators say they want to ensure the ground rules include the possibility of calling new witnesses.

Sen. Susan Collins of Maine is leading an effort among some Republicans, including Mitt Romney of Utah and Lisa Murkowski of Alaska for witness votes.

“My position is that there should be a vote on whether or not witnesses should be called,” Collins said.

Romney said he wants to hear from John Bolton, the former national security adviser at the White House, who others have said raised alarms about U.S. foreign policy toward Ukraine being run by Trump’s personal lawyer, Rudy Giuliani.

Democrats have been pushing Republicans, who have a slim Senate majority, to consider new testimony, arguing that fresh information has emerged during Pelosi’s monthlong delay in transmitting the charges.

“We want the truth,” Senate Minority Leader Chuck Schumer said Tuesday as the chamber opened. He said that in other presidential impeachment trials the Senate called witnesses. “Do Senate Republicans want to break the lengthy historical precedent?”

Republicans control the chamber 53-47 and are all but certain to acquit Trump. It takes just 51 votes during the impeachment trial to approve rules or call witnesses. Just four GOP senators could form a majority with Democrats to insist on new testimony. It also would take only 51 senators to vote to dismiss the charges against Trump.

At the private GOP lunch, Sen. Rand Paul of Kentucky warned that if witnesses are allowed, defense witnesses could also be called. He and other Republicans want to subpoena Biden and his son, Hunter, who served on the board of a gas company in Ukraine, Burisma, while his father was vice president.

“I look forward to forcing votes to call Hunter Biden and many more,” tweeted Paul, an ally of the president, late Monday.

McConnell is drafting an organizing resolution that will outline the steps ahead. Approving it will be among their first votes of the trial, likely next Tuesday.

He prefers to model Trump’s trial partly on the process used for President Bill Clinton’s trial in 1999. It, too, contained motions for dismissal or calling new witnesses.

“Fifty-one senators will decide who to call,” McConnell said.

McConnell is hesitant to call new witnesses who would prolong the trial and put vulnerable senators who are up for re-election in 2020 in a bind with tough choices. At the same time, he wants to give those same senators ample room to show voters they are listening to demands for a fair trial.

Most Republicans now appear willing to go along with McConnell’s plan to start the trial first then consider witnesses later, rather than up front, as Democrats want.

Even if senators are able to vote to call new witnesses, it is not at all clear there would be majorities to subpoena Bolton or the others.

“I’ve been working to make sure that we will have a process that we can take a vote on whether or not we need additional information, and yes, that would include witnesses,” Murkowski told reporters.

McConnell opened the Senate on Tuesday scoffing at what he called the “bizarro world” of Pelosi’s impeachment strategy that delayed transmitting the charges for weeks.

“Do these sound like leaders who really believe we are in a constitutional crisis, one that requires the most severe remedy?” McConnell asked. He rejected Pelosi’s recent suggestions that whatever the Senate verdict, Trump will be “impeached forever.”

“It will fall to the Senate to end it with seriousness and sobriety,” he said.

Pelosi has yet to announce House managers to prosecute the case in the Senate.

Schiff is expected to lead the team. He gave the caucus a presentation on Tuesday about the transmittal of the articles and the Senate trial, according to two people who were in the room.

The Senate chaplain opened the day’s session with an apparent nod to what’s ahead.

“Teach our lawmakers to disagree with respect, civility and humility,” Chaplain Barry Black, a retired rear admiral of the Navy, said in prayer. Help them to remember, he prayed, that “patriots reside on both sides of the aisle.”