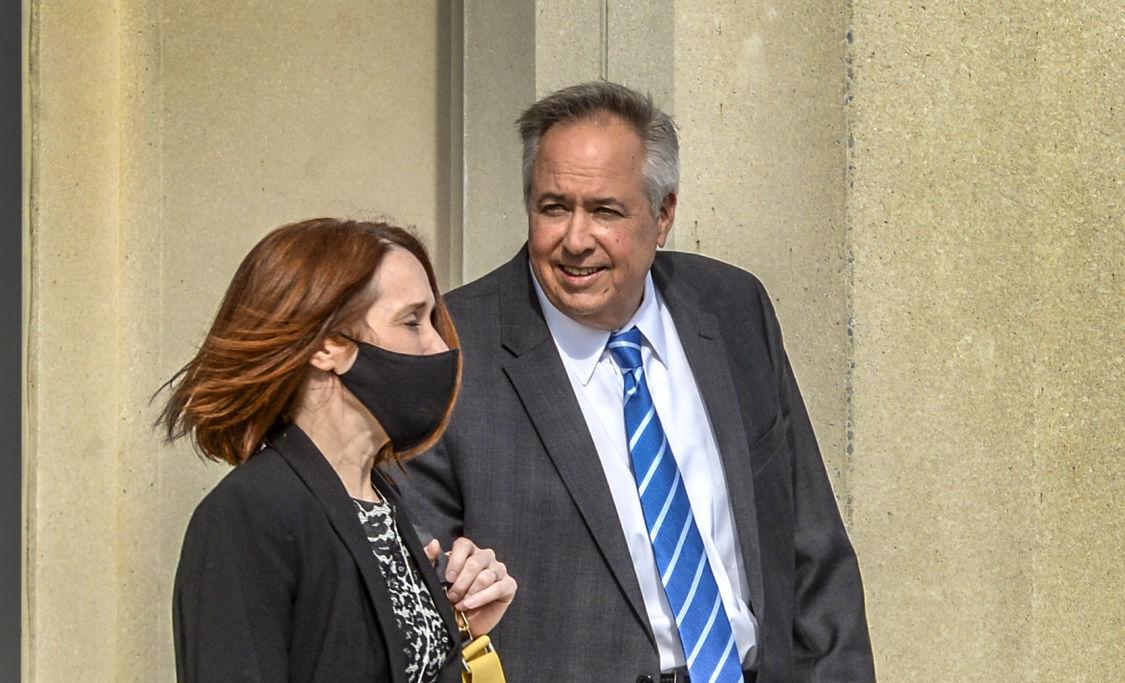 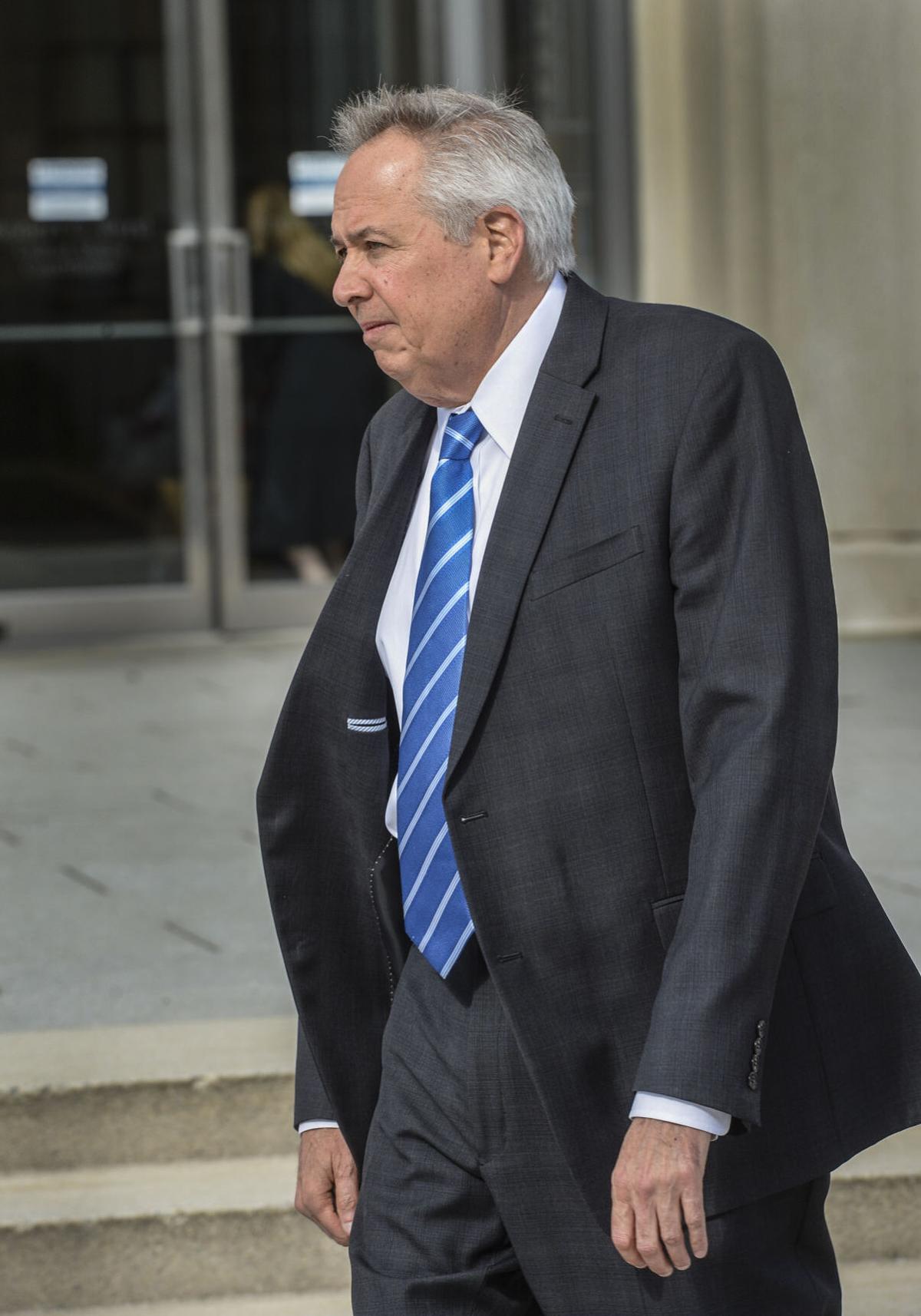 Chris Zimmerman, a senior vice president for AmerisourceBergen Drug Co., leaves the federal courthouse in Charleston on Wednesday evening, after taking the stand during the ongoing opioid trial pitting Cabell County and Huntington against drug manufacturers.

Chris Zimmerman, a senior vice president for AmerisourceBergen Drug Co., leaves the federal courthouse in Charleston on Wednesday evening, after taking the stand during the ongoing opioid trial pitting Cabell County and Huntington against drug manufacturers.

CHARLESTON — Emails to and from an AmerisourceBergen Drug Corp. executive presented Thursday at Huntington and Cabell County’s trial against opioid distributors revealed jokes, flippant remarks and mockery of Appalachians that continued within the company for years.

The emails contained parody songs that used words like “pillbillies” and “Oxycotinville” to describe West Virginians. They warned of a mass northern exodus out of Florida after stricter opioid laws were passed and acknowledged “there is a whole lot of pain” in Appalachia because of the crisis.

Senior Vice President Chris Zimmerman said the emails were sent for business purposes only and to vent frustration from their tireless work to keep the supply chain safe. The emails were just a handful of thousands sent over a year, he said.

“I’m sure you are going to show me more, but I can tell you the culture at ABDC is of the highest calibers,” he said.

“It is a pattern of misconduct by those in charge of protecting our community,” he said.

Zimmerman’s testimony was part of a trial in which the municipalities accuse AmerisourceBergen, Cardinal Health Inc. and McKesson Corp. of fueling the opioid epidemic by sending 127.9 million opiate doses into Cabell County from 2006 to 2014. A reduction in the amount shipped after 2011 led users to turn to illicit opiate drugs, like heroin, they said.

The defendants said it is the Drug Enforcement Administration that sets opiate shipment quotas, and while they reported suspicious orders to the federal regulator, they never received feedback on their next step. The high shipping rates could also be due to higher numbers of prescriptions written by doctors of a population with poor health, they said.

The first email brought up in court contained lyrics, sung to the “Beverly Hillbillies” TV sitcom theme song, about “pillbillies” traveling to find opiate prescriptions as they shopped for doctors. Zimmerman sent the lyrics twice with the subject line “I sent you this a month or so ago. Nice to see it recirculated =)” and “Saw this and had to share.”

It wasn’t just Zimmerman who joked. A corporate investigator forwarded an email titled “Oxycontin for kids” paired with a cereal box altered to read “SMACK.” A co-worker responded “You’re just a barrel of laughs today.”

Zimmerman said it had been shared for educational purposes and he did not endorse it.

Another email he forwarded contained an Associated Press article regarding increased shipment trucks among distributors.

“There is a whole lot of pain in the Appalachian area,” he had written.

In another, a lobbyist had sent him details of stricter legislation in Florida to curb opiate abuse in 2011.

“Watch out Georgia and Alabama, there will be a mass exodus of pillbillies heading north,” he wrote.

He testified it was poorly written and he just wanted people to be on the lookout.

In 2011 he also sent a parody song to the tune of Jimmy Buffett’s “Margaritaville” in which a person is traveling from Kentucky to shop for opiates and doctors.

The most recent emails were from 2017, in which a drug distributor lobbying group targeted Sen. Joe Manchin, D-W.Va., after he introduced federal legislation to help fund substance abuse treatment programs nationwide.

Zimmerman received a message from Steve Mays, senior director of his office, who is expected to testify next.

“I guess if all the distributors stop sending CS into WV the problem would be solved, correct?,” he said, referring to controlled substances.

Mays also sent one email in which he said “one of the hillbillies must have learned how to read,” regarding similar legislation in Kentucky.

Zimmerman apologized to the court for the language contained in the emails. He said he understands the magnitude of the opioid crisis, but also the magnitude of when a legitimate patient does not get their medication.

In looking at policy guides on the witness stand, Zimmerman said that before the DEA temporarily shut down AmerisourceBergen’s Florida distribution center in 2007, the company trained staff about suspicious orders and told them to contact the DEA. There was also a daily transaction report that was sent to the DEA. A third component was that the DEA local office wanted a monthly report.

The reports could focus on specific items for any length of time the office chose, Zimmerman said.

“The regulation was so vague,” Zimmerman said, “which remains today.”

He said the DEA would not give the company guidance on what to report. They had to figure it out themselves. That resulted in more than 12,000 phone calls made to the DEA to report suspicious orders.

“They didn’t want any. They told us to stop,” he said.

There was never a reference to stop shipping, so the program wasn’t designed to do that, Zimmerman said. Each DEA office had different requirements, he said.

Zimmerman said 30 years ago, the company had a great relationship with the DEA; they would meet multiple times a year and have a shared correspondence.

Zimmerman said he reached out to the DEA in Washington, D.C., in 1996 to see if there was a process to make the process better for them to receive suspicious order reports. Over the next two years he worked to develop a better program, he said.

He said the DEA endorsed their suspicious order monitoring program in the 1990s, although Farrell said the DEA later sent a letter retracting any endorsements of any program.

Farrell pointed to an internal memo that said even after 2007 a small pharmacy could order 350,000 hydrocodone and oxycodone pills a year, a medium pharmacy 760,000 and a large pharmacy over 1 million without triggering a suspicious-order alert.

Zimmerman pointed to a report that said the DEA was slow to respond to the dramatic increase in opioid abuse and needs to more fully utilize its regulatory authorities. It found the DEA did not fully use its authorities to stop the crisis from happening from the 1990s to late 2010s, and that the DEA needed to do a better job defining what constitutes a suspicious order.

They said some of the issue was with them not being required to send their information to headquarters, but rather to the field officers.

Farrell then walked Zimmerman through a handful of emails and memos he sent to his employees from 2004 to 2008 that referenced new policies and modifications for suspicious orders.

Each, sometimes multiple times, stated AmerisourceBergen’s policy was to report suspicious orders to the DEA and hold the pills until their own internal investigation was complete. Per their agreement with the DEA, controlled substances should only account for 5% to 15% of a pharmacy’s overall orders. A higher rate would be a red flag.

On Wednesday, Zimmerman said he felt companies did not have a duty to hold shipments.

At the questioning of ABDC attorney Bob Nicholas, Zimmerman said now they report their numbers to the DEA monthly and controlled substance numbers daily, and AmerisourceBergen facilities have myriad security standards and regulations they follow to make sure the pills and other items stay secure from the time they receive them to when they’re dispensed.