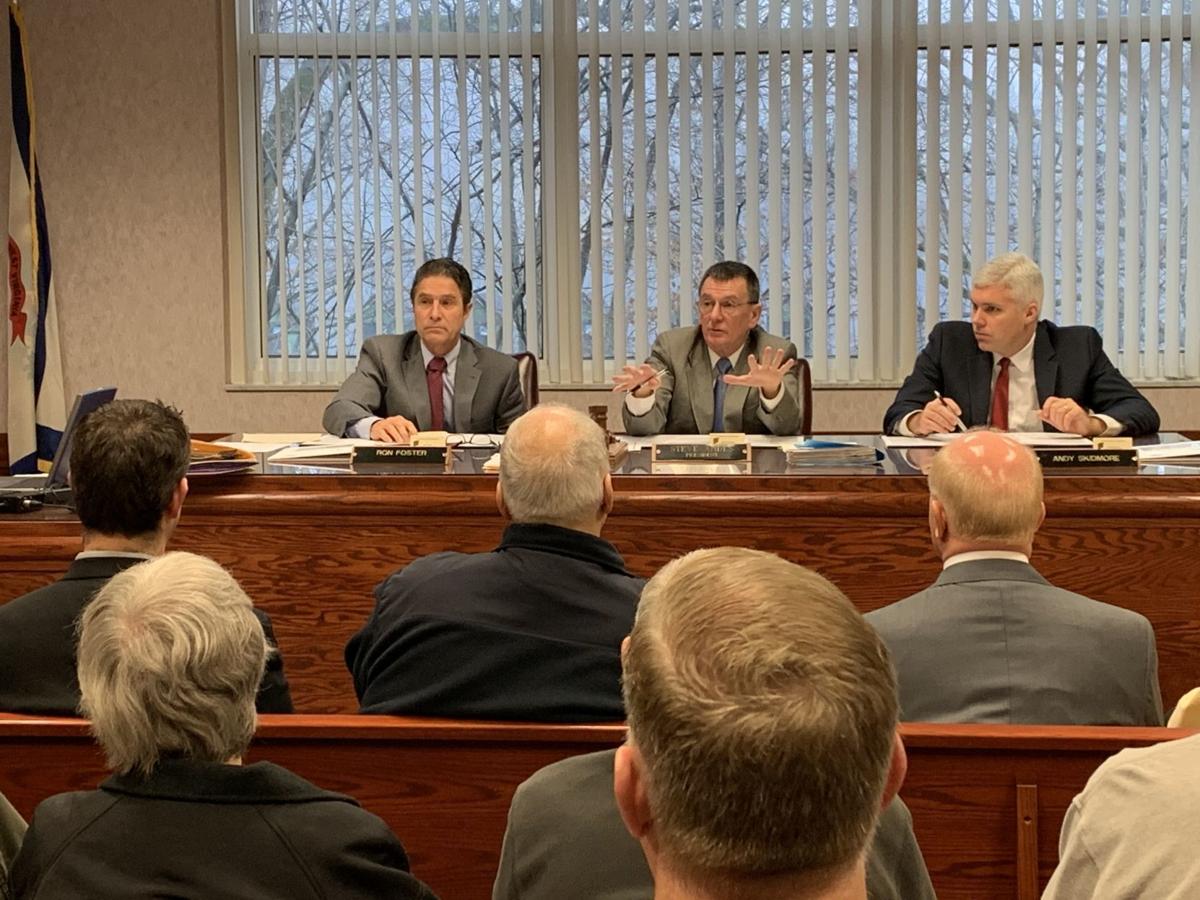 Putnam County Commissioners Ron Foster, from left, Stephen Andes and Andy Skidmore consider a resolution declaring the county a “Second Amendment sanctuary” at their meeting on Jan. 14 in Winfield. The measure passed. 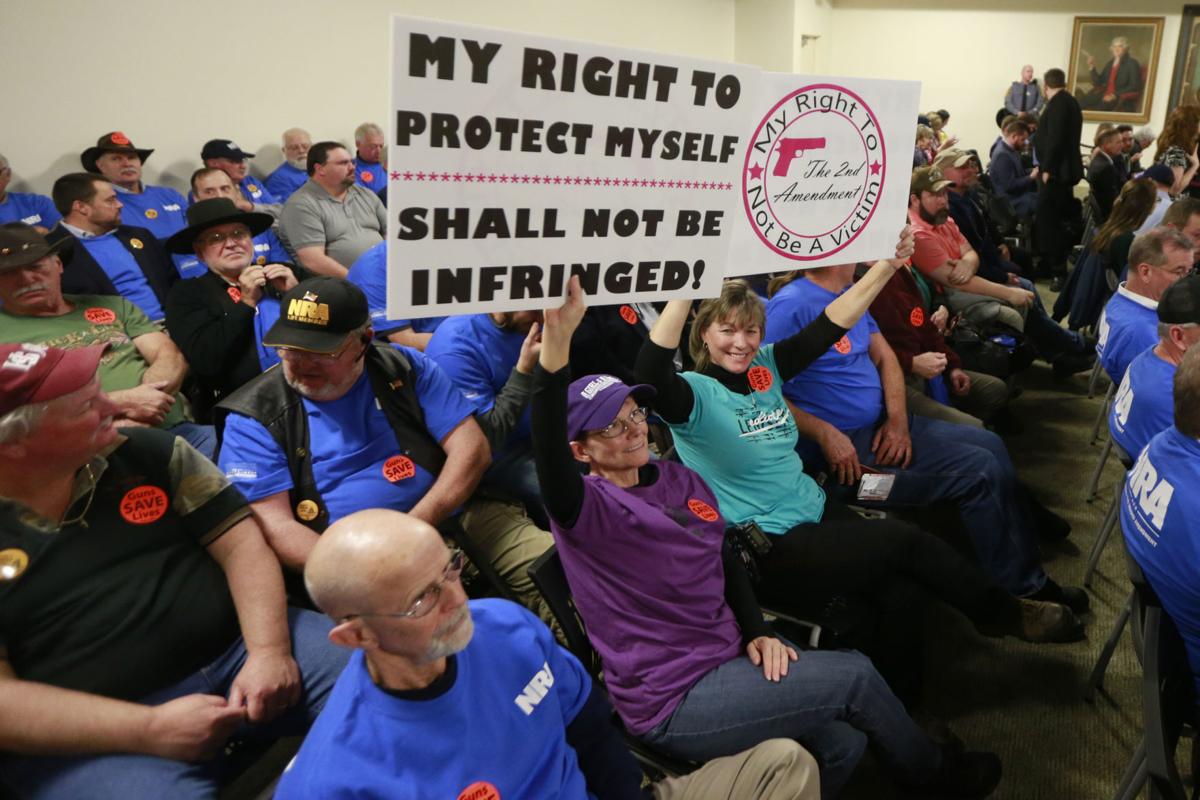 Gun rights protesters hold signs prior to the start of a meeting of the Virginia state Senate Judiciary committee at the Capitol in Richmond, Va., on Monday. The committee passed several bills related to gun laws.

Putnam County Commissioners Ron Foster, from left, Stephen Andes and Andy Skidmore consider a resolution declaring the county a “Second Amendment sanctuary” at their meeting on Jan. 14 in Winfield. The measure passed.

Gun rights protesters hold signs prior to the start of a meeting of the Virginia state Senate Judiciary committee at the Capitol in Richmond, Va., on Monday. The committee passed several bills related to gun laws.

“It’s just basically the county saying that they’re supporting the people’s Second Amendment right to keep and bear arms,” Putnam County attorney Larry Frye said. “We don’t want the Legislature or anybody else unconstitutionally restricting them.”

Putnam County is the first of West Virginia’s 55 counties to take such a step.

In Cabell County, there are no plans to introduce a similar resolution at this time. However, several nearby counties in Kentucky have taken up the symbolic designation, according to Gun Rights Watch, a website that tracks gun laws across the country.

They joined at least a dozen other counties and municipalities in Kentucky to similarly adopt the designation, including Boyd County and Pike County, which passed resolutions Jan. 7.

In Virginia, about 100 counties, cities and towns have passed some version of a Second Amendment sanctuary resolution after Virginia voters handed control of the state Legislature to Democrats in a historic shift last year. Lawmakers there have introduced a number of gun control bills this year.

In response, all but two Virginia counties, Arlington and Fairfax, have passed these measures. Carroll County, in southwestern Virginia, passed the state’s earliest resolution in May 2019.

Putnam Commissioner Ron Foster said the county used one of the Virginia resolutions as a model when drafting its measure.

The resolution says: “The County Commission of Putnam County, West Virginia, is concerned about the passage of any law containing language that would unconstitutionally infringe upon the rights of the citizens of Putnam County to keep and bear arms.”

It says the commission “expresses its desire that public funds are not used to unconstitutionally restrict the Second Amendment rights of the citizens of Putnam County, or to aid federal or state agencies in the unconstitutional restriction of said rights.”

Foster said he was not in favor of proposed buyback programs for semiautomatic rifles. Some 2020 Democratic presidential candidates have debated mandatory or voluntary buybacks for these types of weapons.

Frye said he doesn’t know of any specific gun control measures the county might fight, but said each new law would be up to interpretation by the county.

“If the Legislature would come through and pass some regulation or law that the county believes is unconstitutional,” he said, “they could pursue any legal means that they thought was appropriate.”

Michael Thompson, president of the Putnam County Gun Club, attended the meeting in support of the resolution. He said current gun control laws aren’t working — and not because there aren’t enough of them. He said the nation must figure out why people are shooting people, and focus less on the firearms themselves.

Thompson said things like confiscating semiautomatic weapons from law-abiding gun owners is not the answer.

“You’re taking a guy that’s never done anything wrong — your grandfathers … the deacons of the church … good people in the community — that have a semiautomatic rifle at home … or they have 30-round magazines,” Thompson said. “And you’re going to pass a law and then say now these people are criminals because they didn’t turn this in, and we’re going to go to their house and kick in their door and arrest them? And if you kick in their door and go to arrest them and they shoot at you, who’s in the wrong there?

“They’ve done no crime,” he continued, “and you’re coming to confiscate property they paid for, and if you kick in their door, they might think that they’re trying to defend themselves. And so we end up on a slippery slope where good people are going to be fighting possibly good people, and I think we should try to avoid that.”