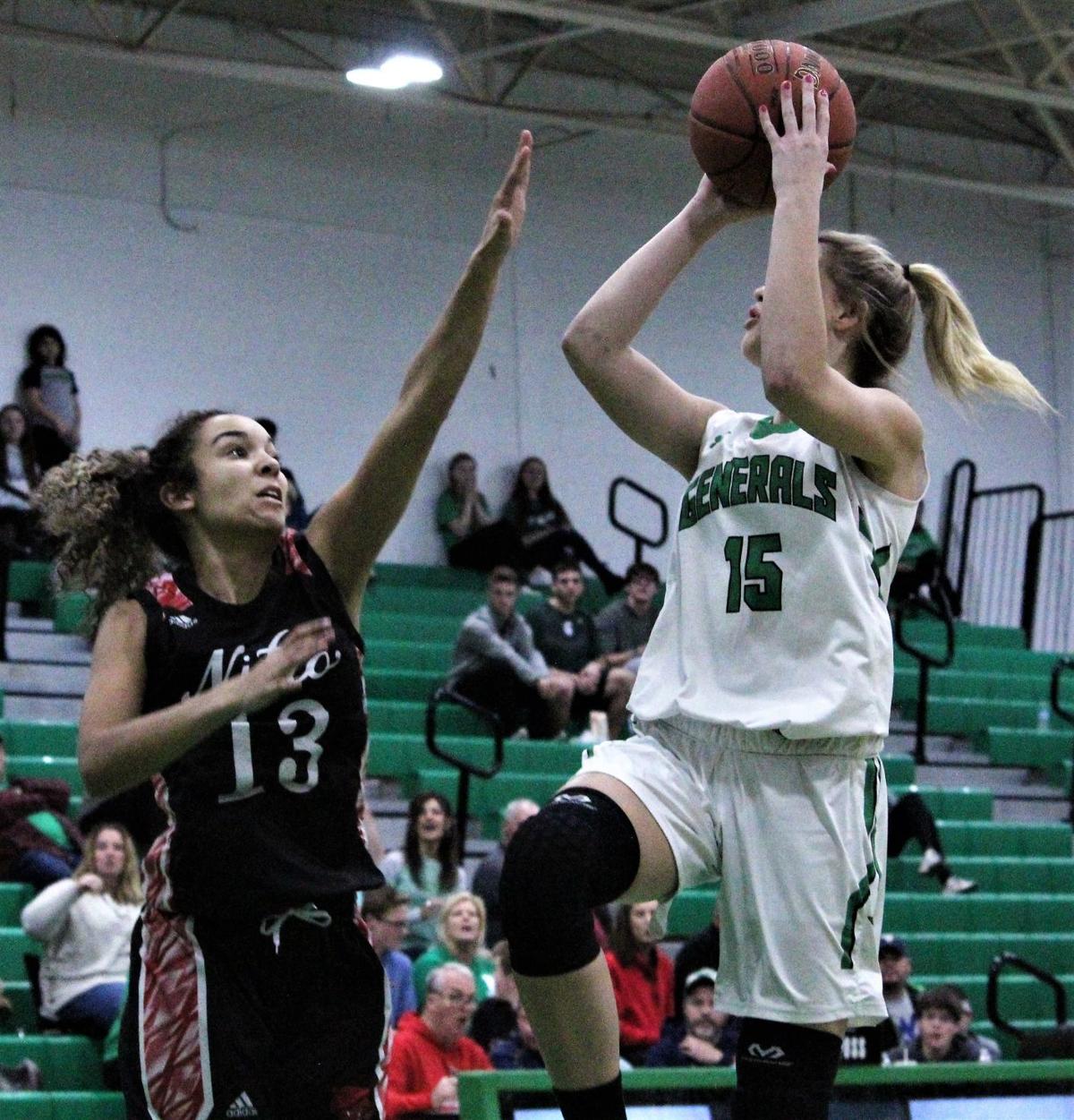 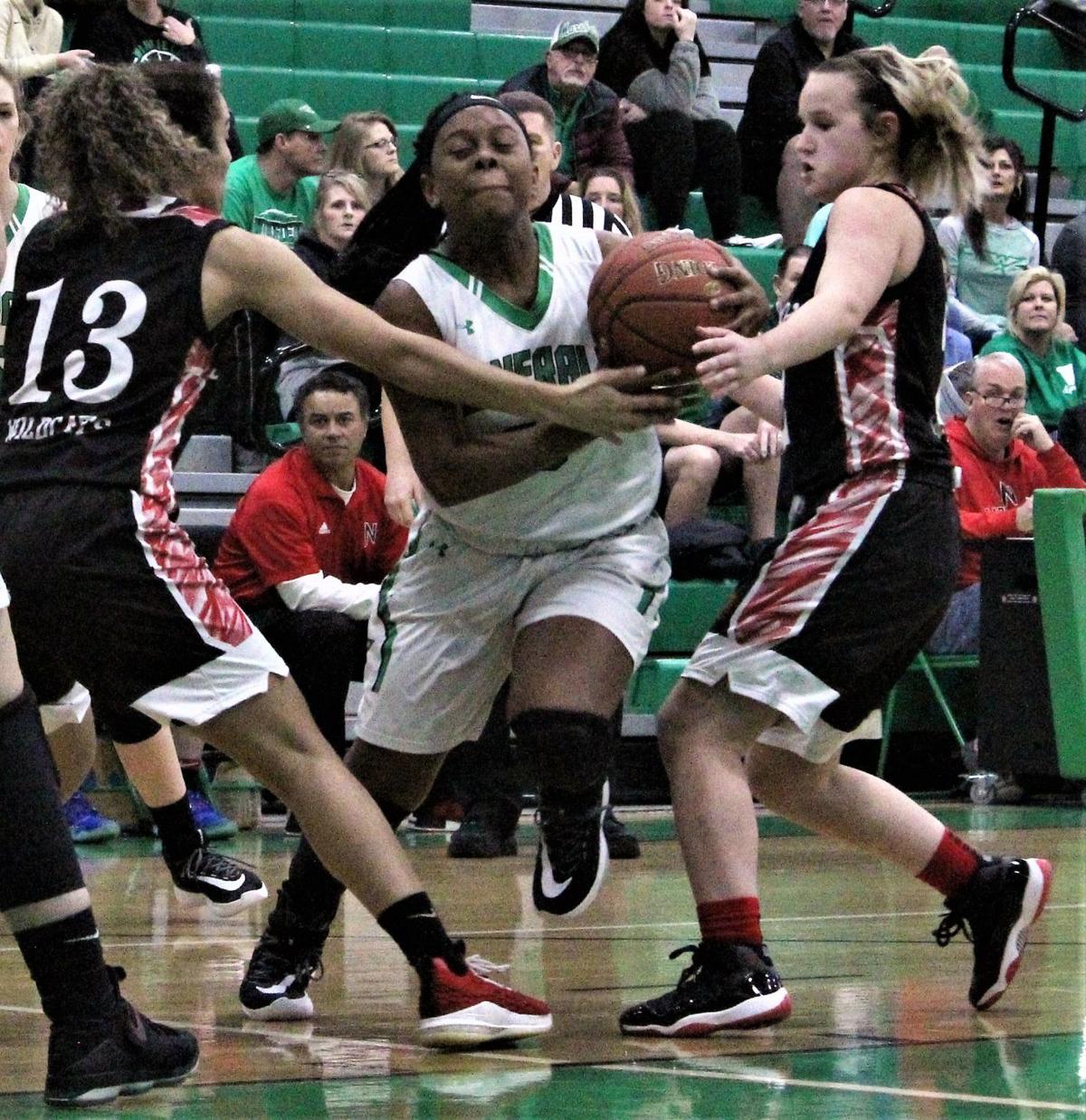 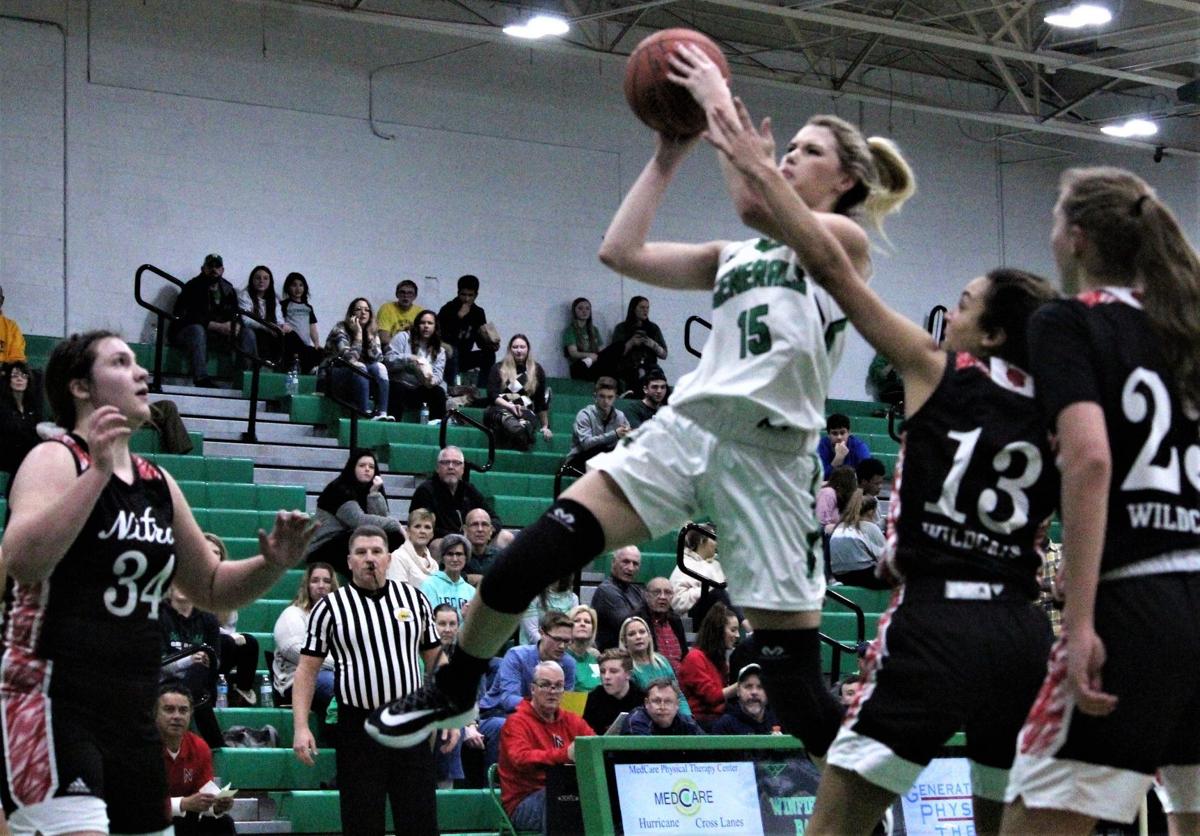 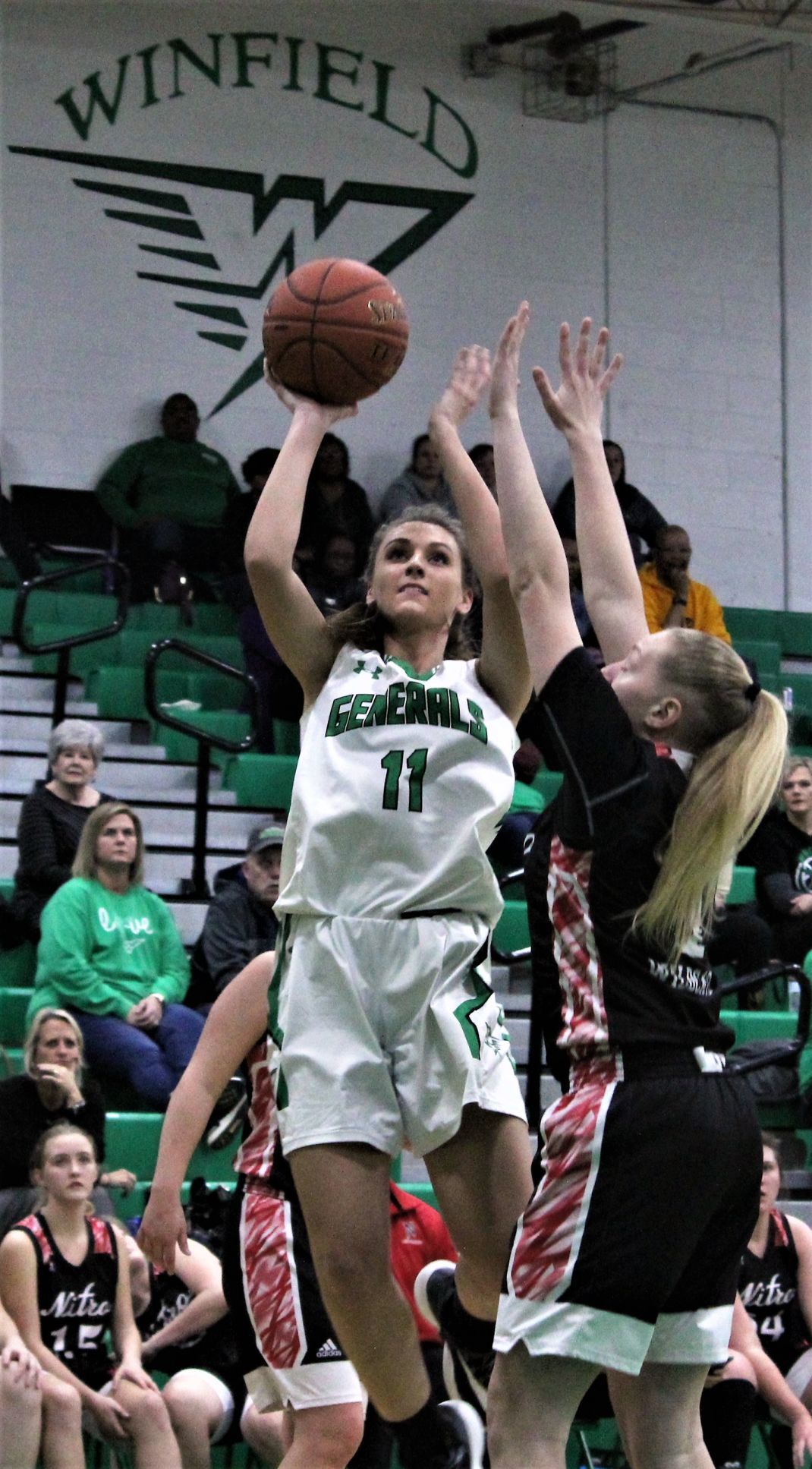 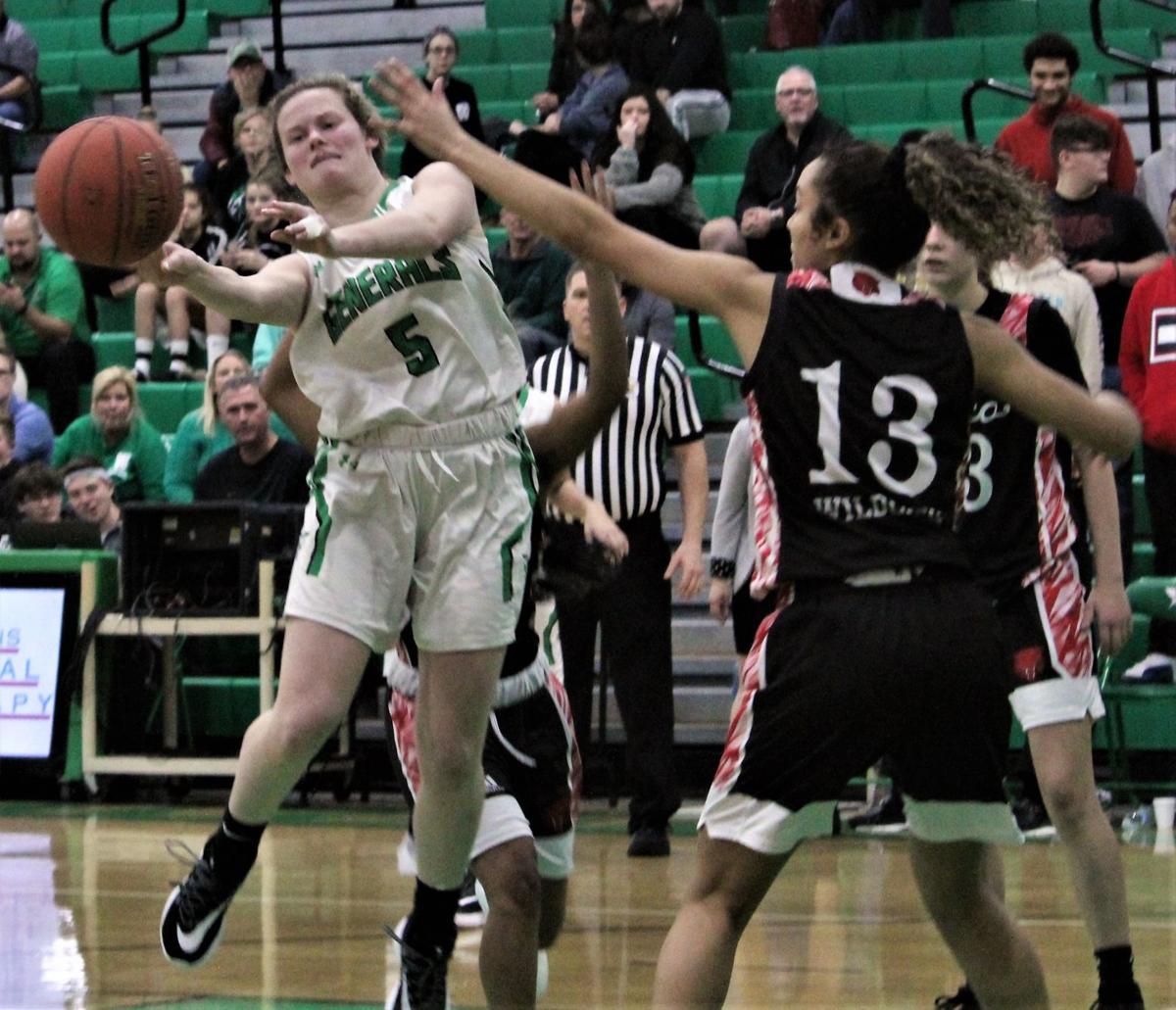 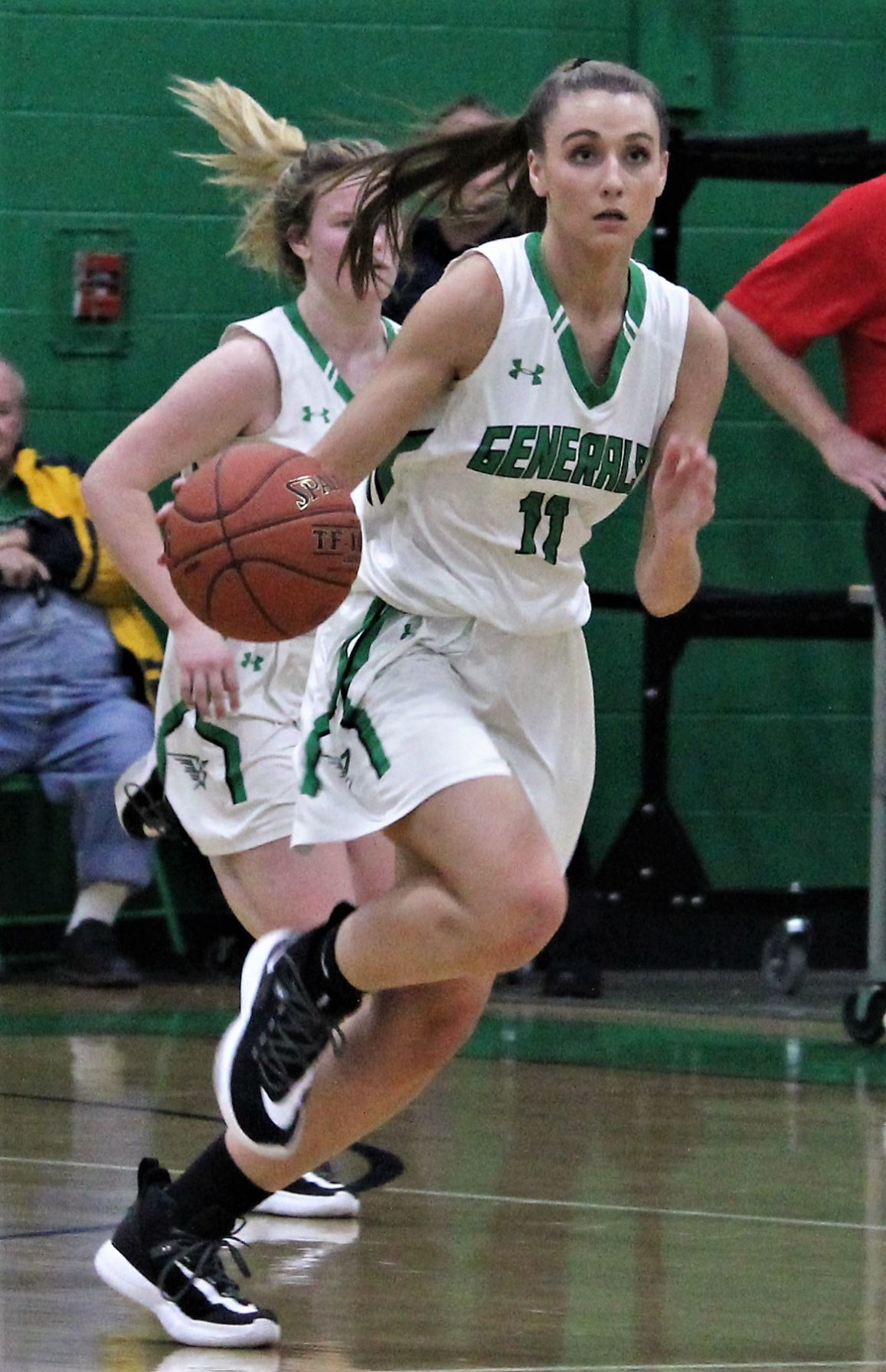 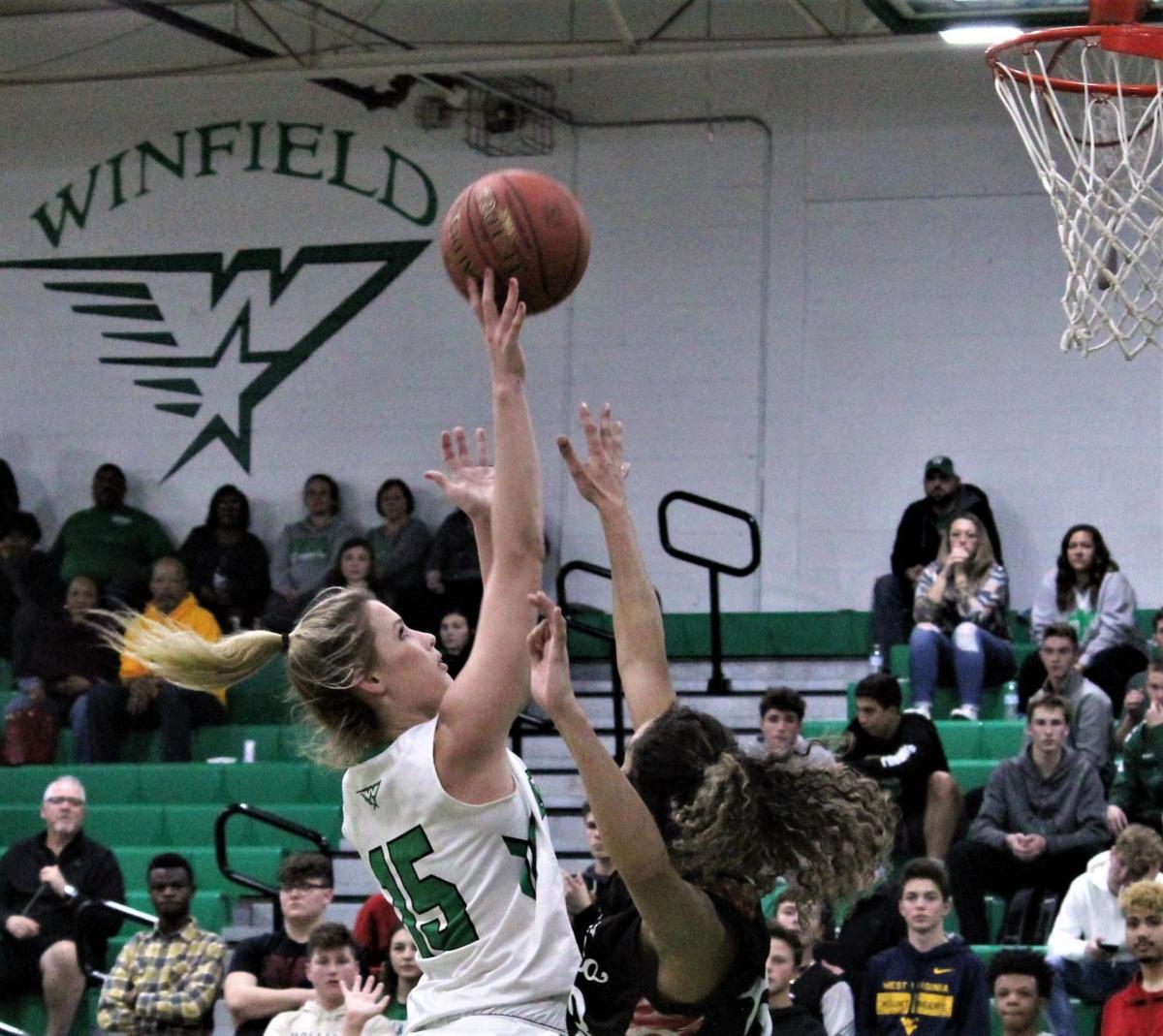 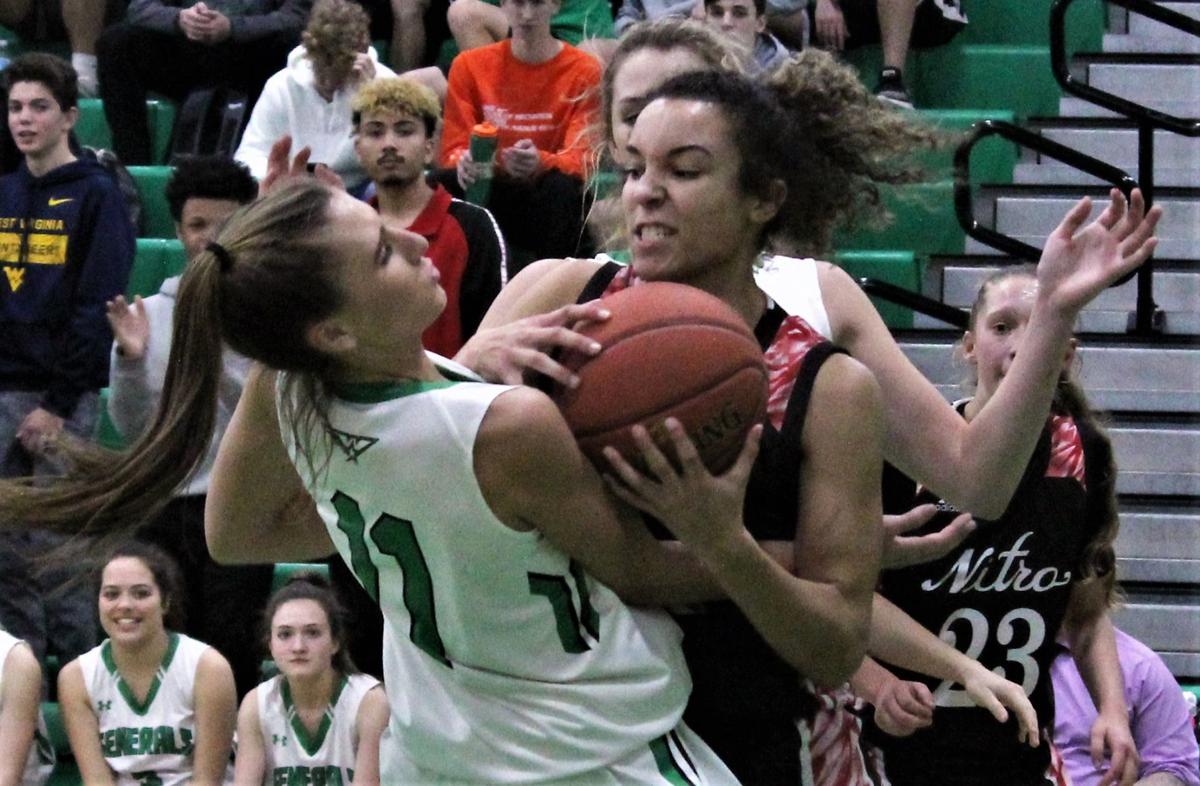 BOTH PHOTOS: The Lady Generals host the Lady Wildcats of Nitro on Thursday evening, Jan. 9 at Winfield High School. 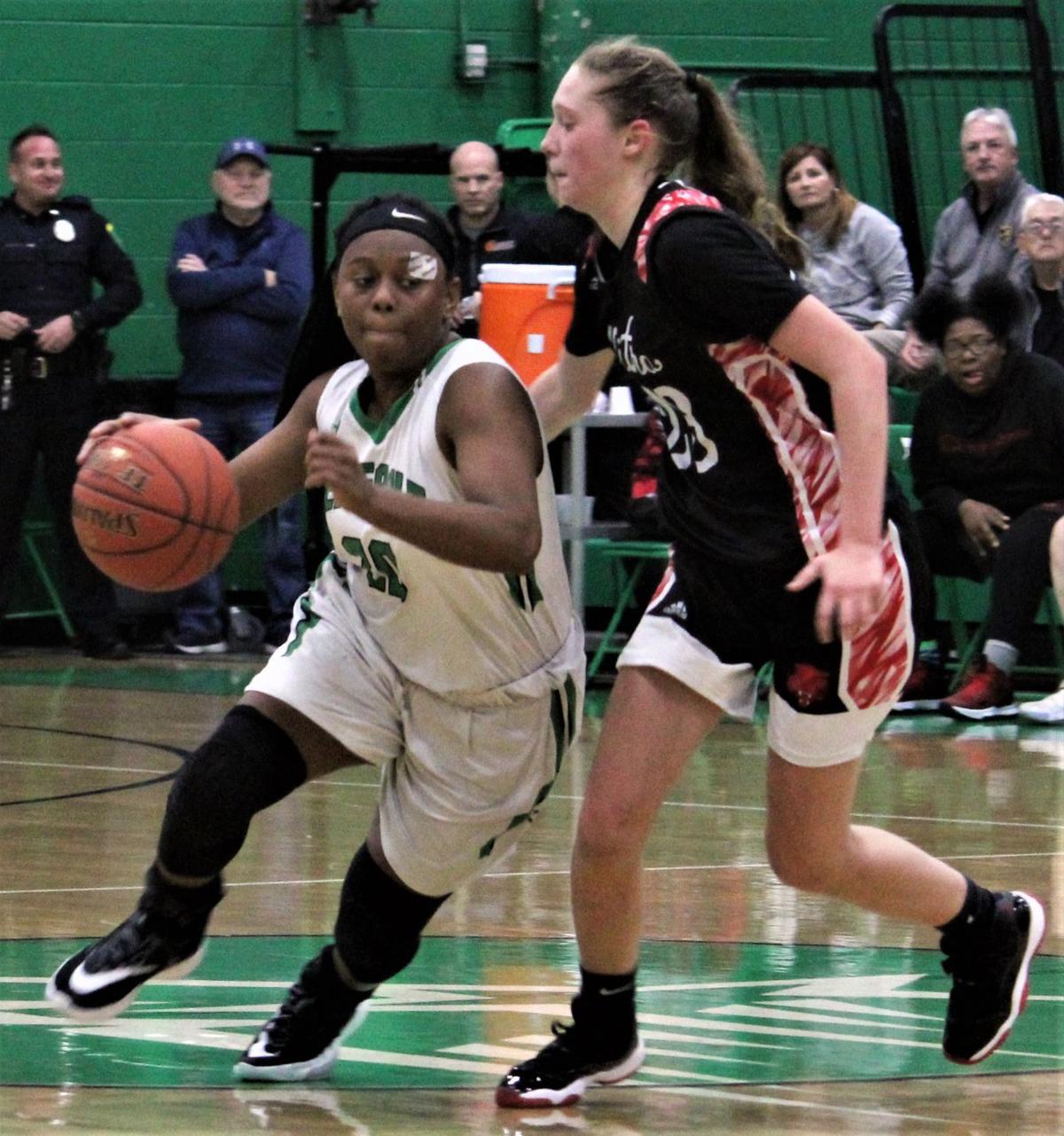 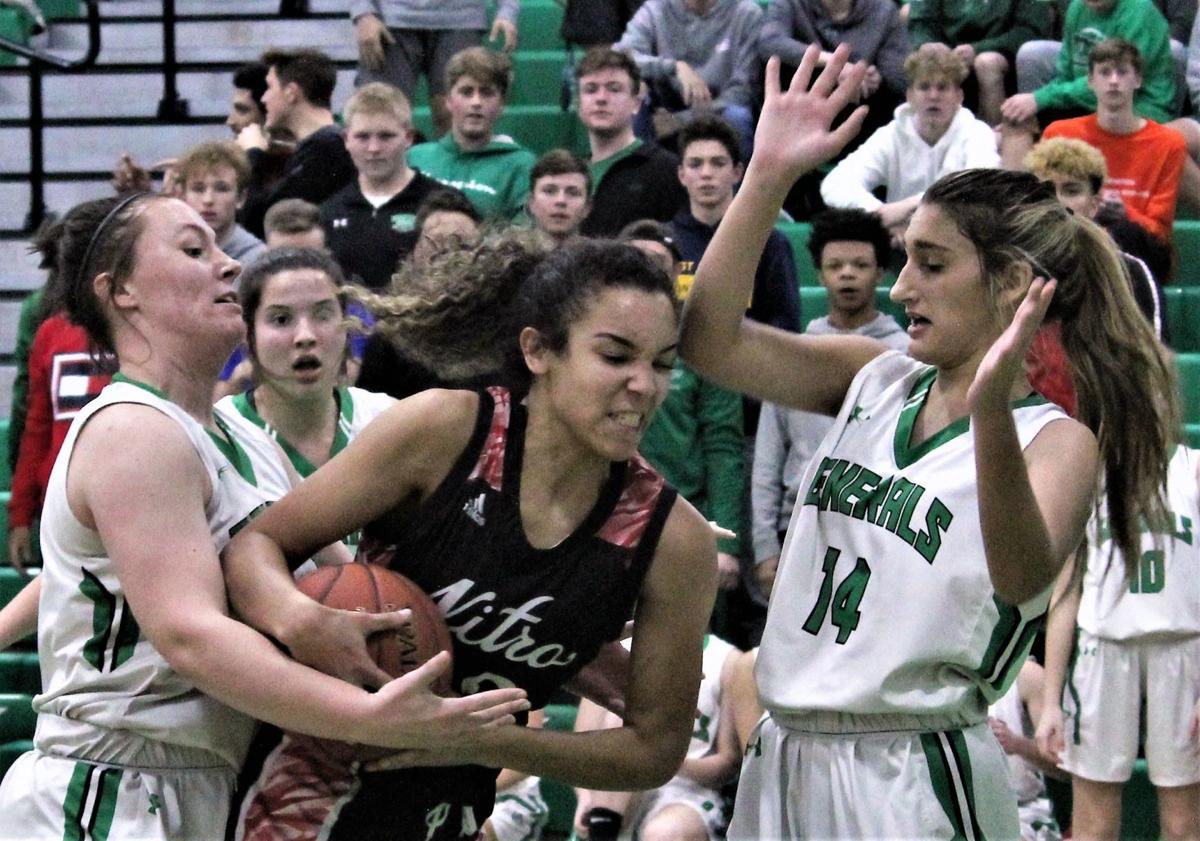 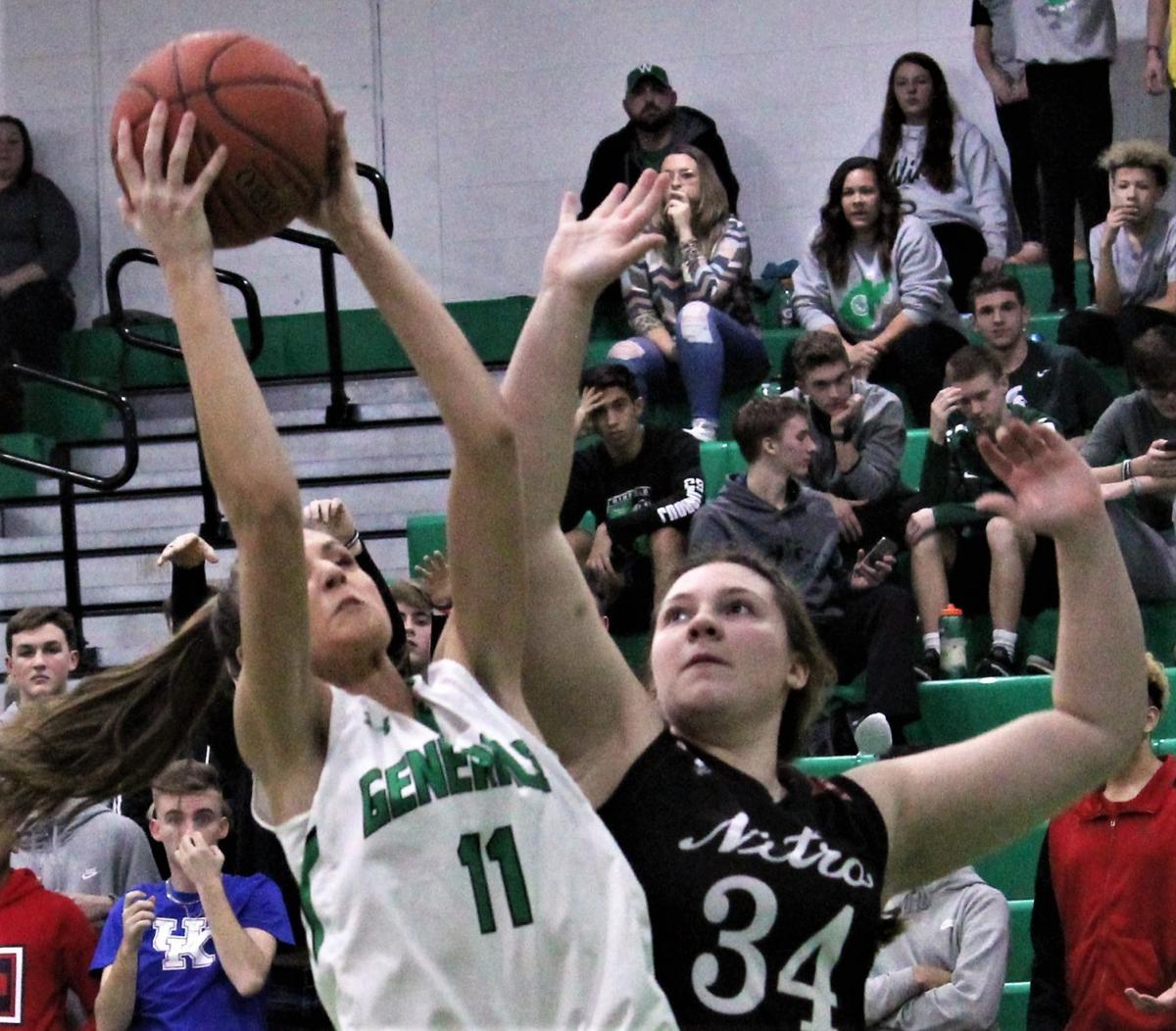 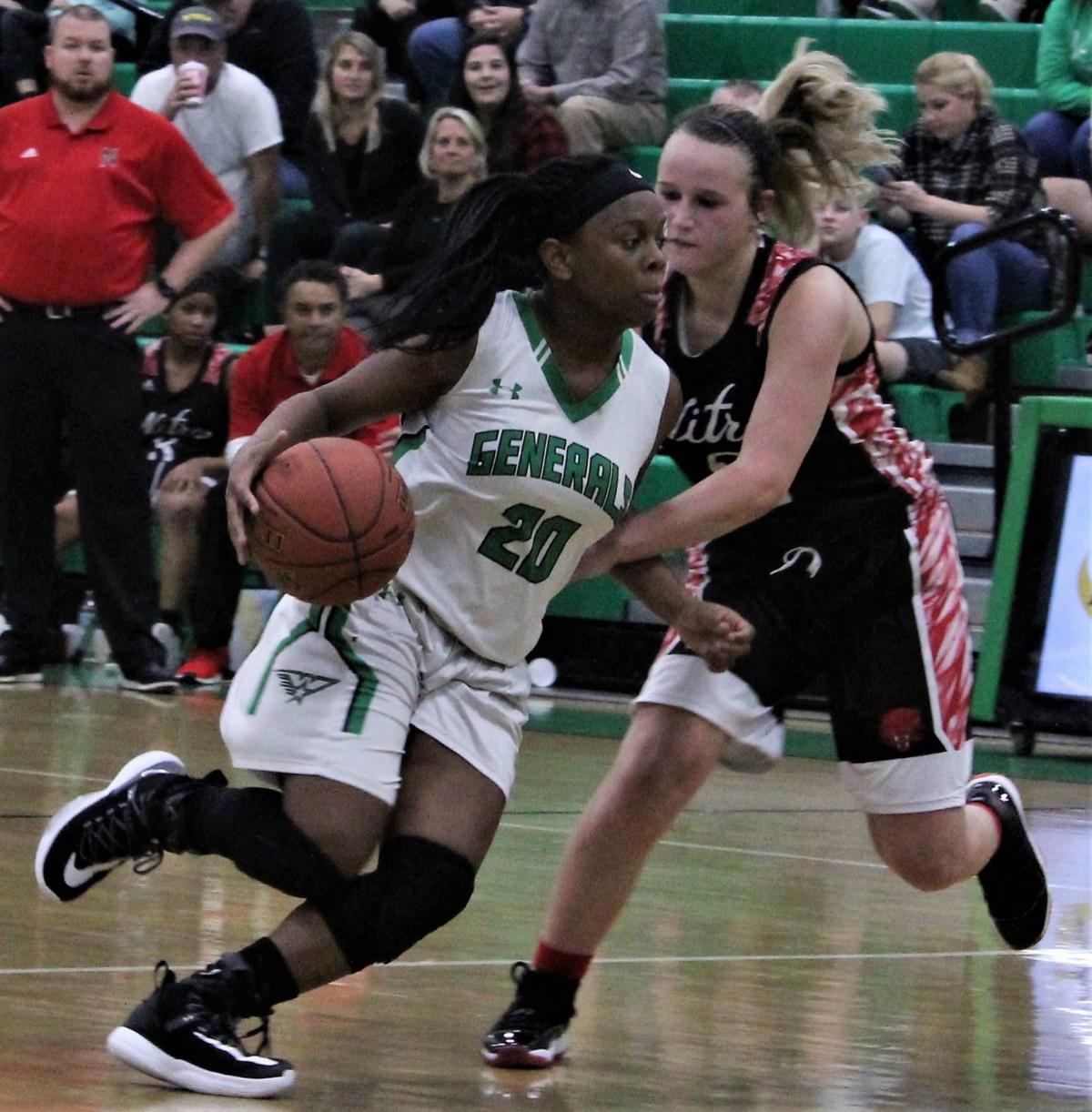 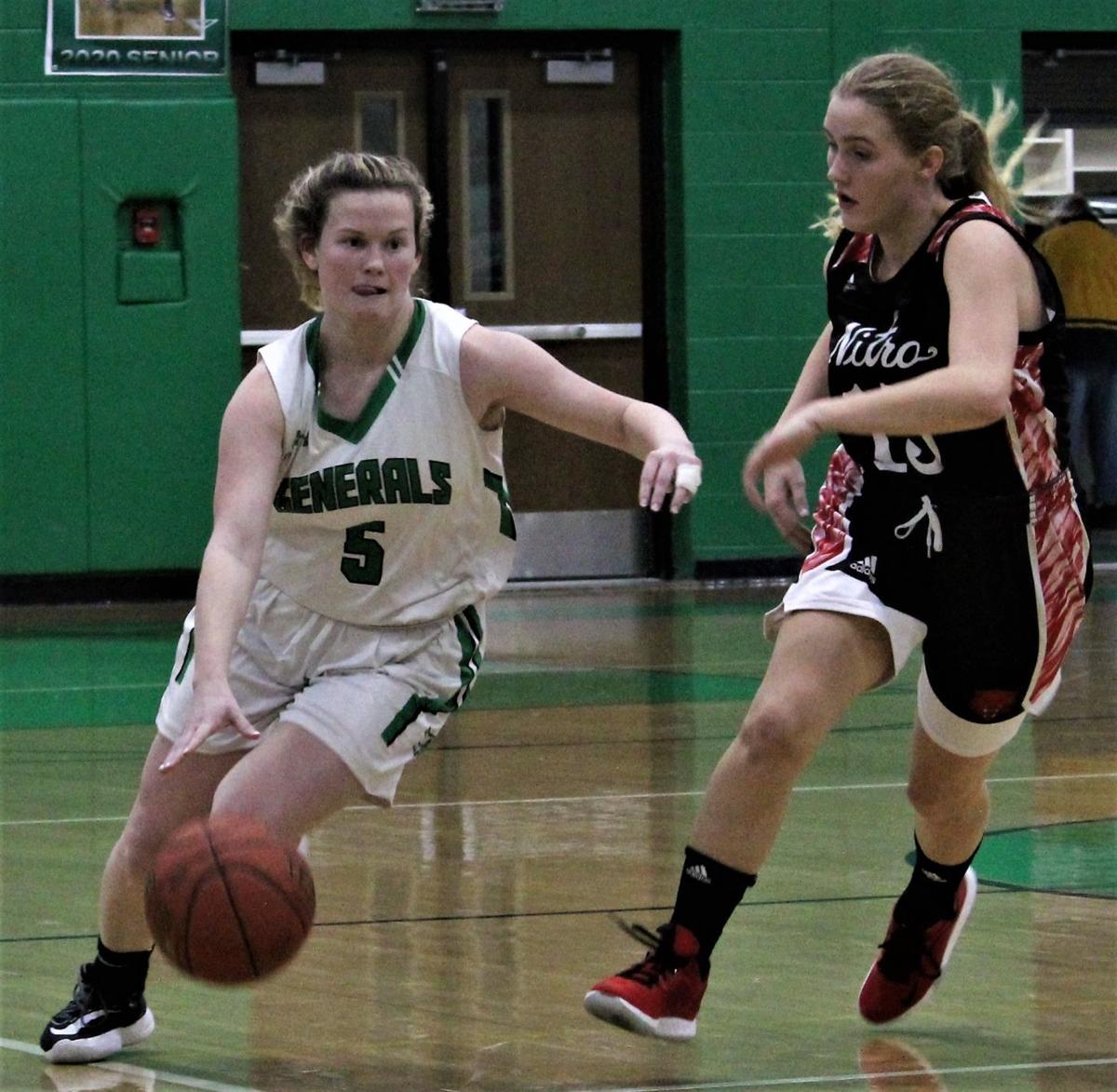 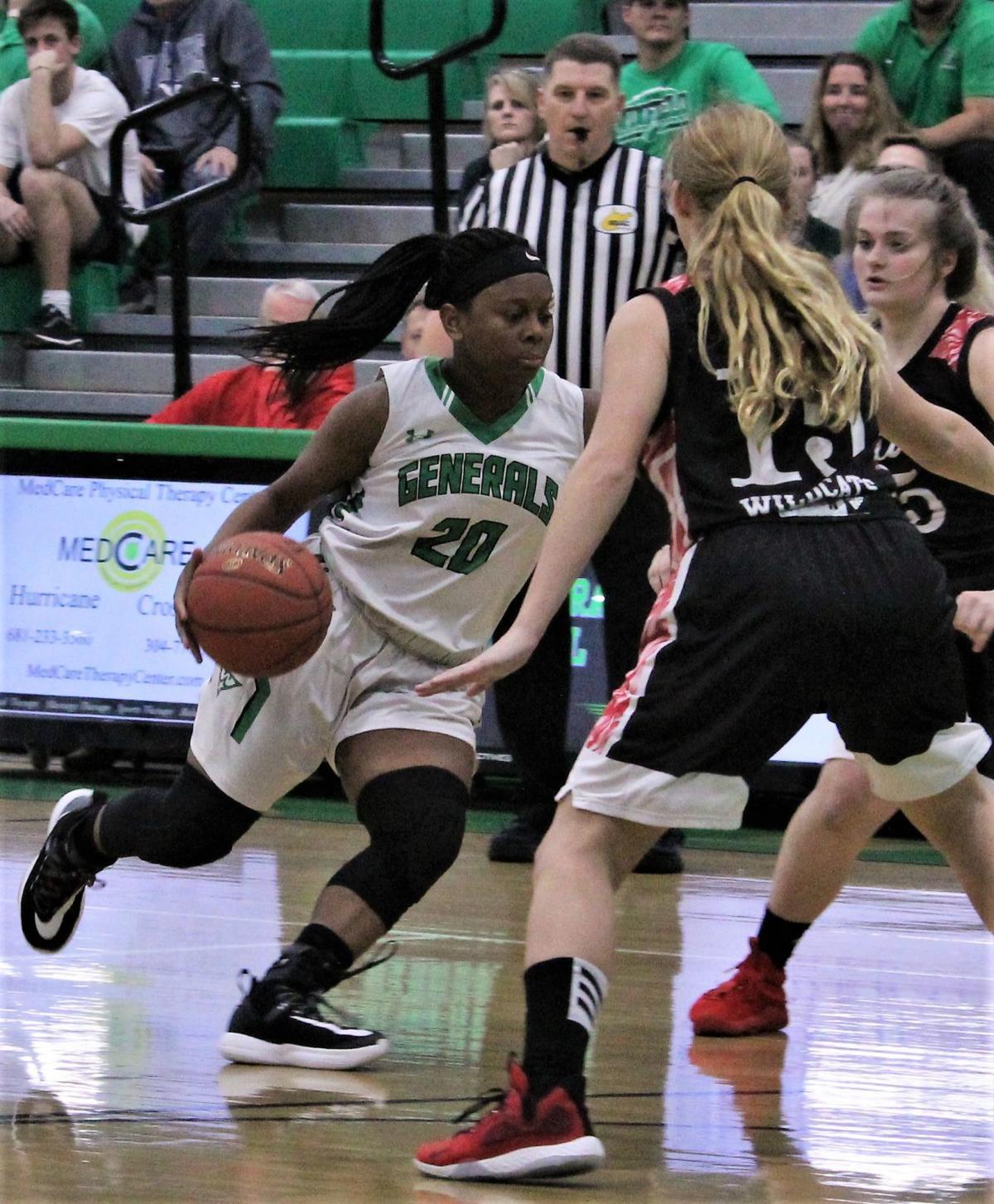 BOTH PHOTOS: The Lady Generals host the Lady Wildcats of Nitro on Thursday evening, Jan. 9 at Winfield High School.

WINFIELD — With blood falling to the floor, fouls piling up and tempo reaching dizzying heights, Thursday’s Class AA showdown between No. 7 Nitro and No. 2 Winfield felt very much like a heavyweight fight.

It’s one the host Generals had looked forward to for quite some time — and did Winfield ever save one heck of a knockout combination for the late rounds.

The Generals (8-1) finally matched their smothering defense with some efficient offense, turning a 42-40 lead late in the third quarter into a 72-44 rout with a closing 30-4 flurry that should serve notice to the rest of the Cardinal Conference as well as Region 4.

“We said to ourselves, ‘We’re in their head, keep it going, they’re getting frustrated,’ ” Winfield senior guard Mara McGrew said. “With the rankings, we saw that and we knew we had to come out and make a statement and I think we did that.”

In two games between the squads a year ago, Nitro guard Baylee Goins scored a combined 86 points in a pair of wins for the Wildcats.

Most of that damage came against a half-court man-to-man defense with Nitro coach Pat Jones spreading the floor and letting his first-team All-State weapon feast in one-on-one situations.

Things were different from the outset Thursday with the Generals, who utilized a full-court press and provided plenty of help on Goins. The result was 36 Nitro turnovers and a season-low 17 points for Goins on 7-for-22 shooting.

“They were so amped for this game,” Winfield coach Kelsey Spang said. “Nitro is a tough team. Anyone that goes against them has to prepare for them. But our girls knew their personnel and we had a change-up on how we approached them this year. I think the girls thrived and once they saw how successful they were it put it into fifth gear for them.”

Nitro surged ahead early, leading 19-12 at the end of the first quarter. The tide slowly started to turn in the second as Winfield reversed that score and the teams entered the locker room knotted at 31.

But within that tie were some indicating factors. First, Winfield shot just 12 for 43 in the first half, missing several easy looks inside. Secondly, while both teams went to the break in significant foul trouble, it was worse for the Wildcats (7-3). Goins and sophomore center Emily Lancaster, who scored 12 of her 14 points in the first half, each had three fouls entering the second half and Lancaster picked up her fourth just 13 seconds into the third quarter and was on the bench for most of the rest of the game.

“I think that hurt us,” Nitro coach Pat Jones said. “She was playing really well.”

Without Lancaster finishing off possessions inside, it was up to Goins and senior point guard Haley Carroll to try and negotiate the endless wave of fresh Winfield defenders, and as the frenetic pace wore on, the Wildcats began to break.

The Generals entered the game with four players averaging double-figure scoring, an indicator of a balanced attack that paid off on Thursday. Leading scorer Z.Z. Russell finished without a field goal and with just six points as she nursed a cut on her eye sustained in the first quarter.

But McGrew buried five 3-pointers on her way to a game-high 22 points, twin post players Emily Hudson (13 points, 13 rebounds) and Lauren Hudson (15 points, 10 rebounds) each had double-doubles and the supporting cast came up big too. Kierstyn Doss had six of her eight points in the fourth quarter and reserve Kennedy Dean’s layup while being fouled in the waning minutes of the third quarter kick-started a backbreaking 21-0 run.

Goins went down late in the fourth quarter with a cramp and could only look on as a ragged Nitro squad limped to the finish. Carroll finished with nine points, but it wasn’t nearly enough.

“One of the things I told them before the game started is that we had to play composed and play under control and we didn’t do that very well,” Jones said. “I think free throws were the difference in the second half. I don’t know how many they shot, but I know how many we shot.”

To his point, the Generals were 9 for 16 from the charity stripe in the second half while the Wildcats didn’t attempt a free throw after halftime.

But with a date between the two looming at Nitro on Feb. 15, score round one decisively for the Generals.

Lauren Hudson added six steals and Doss had five as the Generals registered 23 for the game. Olivia Collier grabbed 11 rebounds but did not score for Nitro.