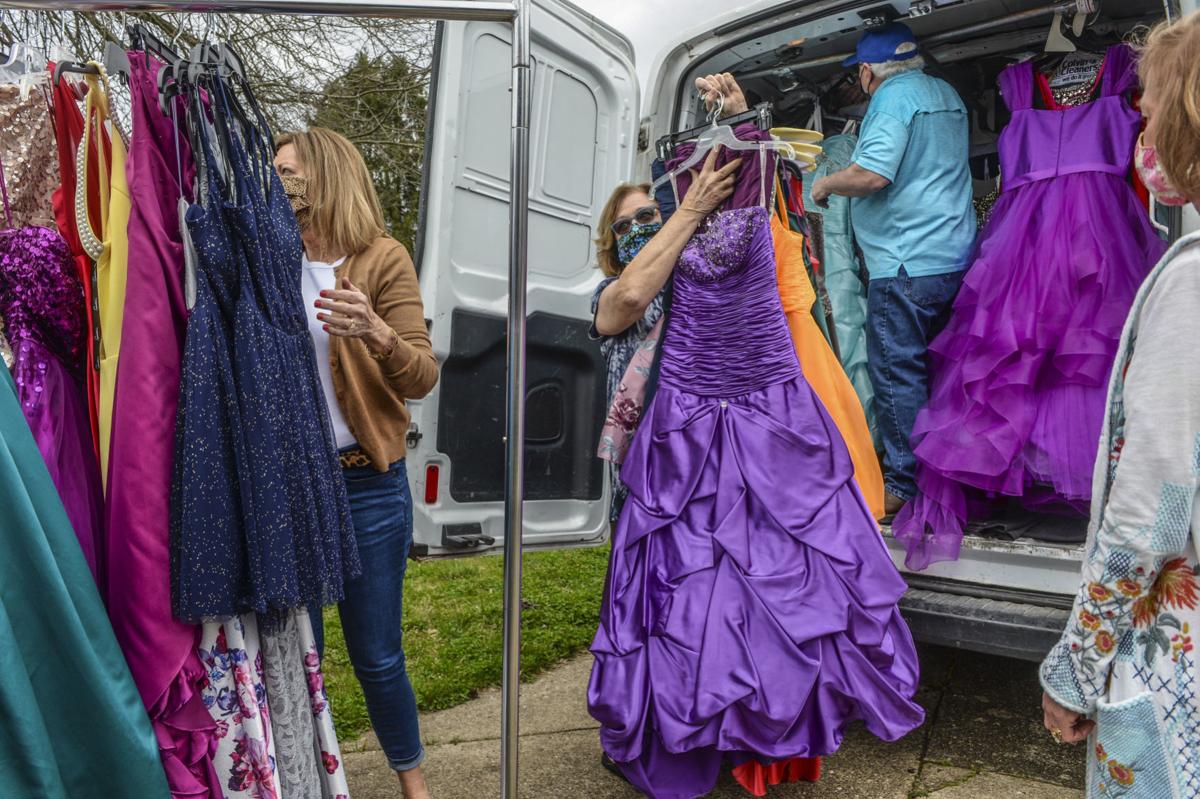 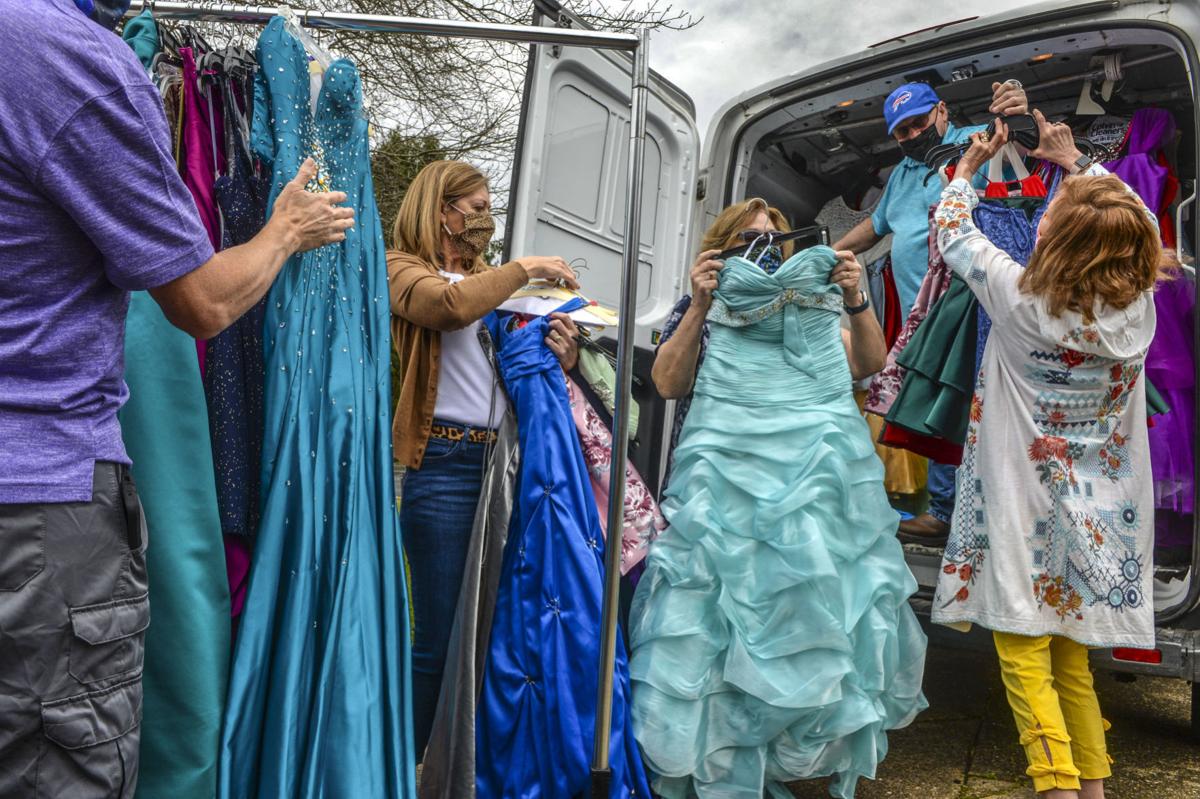 Volunteers transfer hundreds of newly donated dresses from a van to rolling racks to be displayed at Ronda’s Closet. 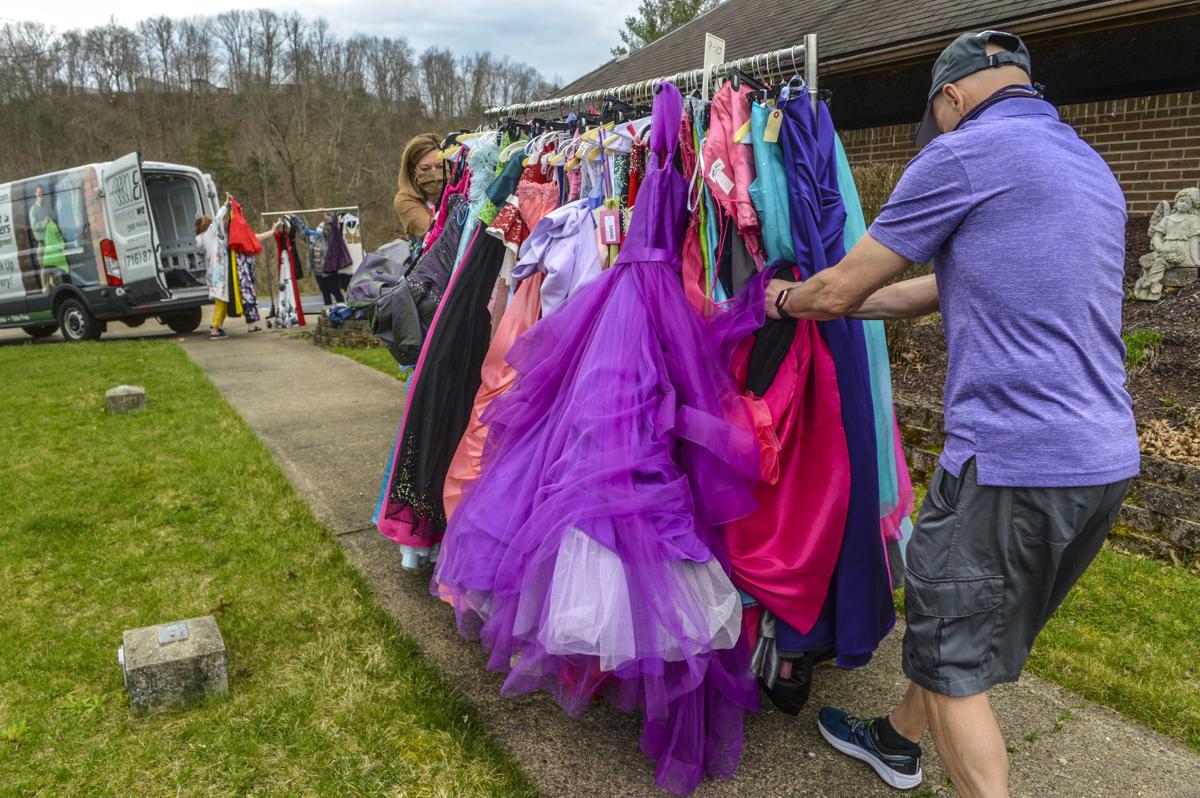 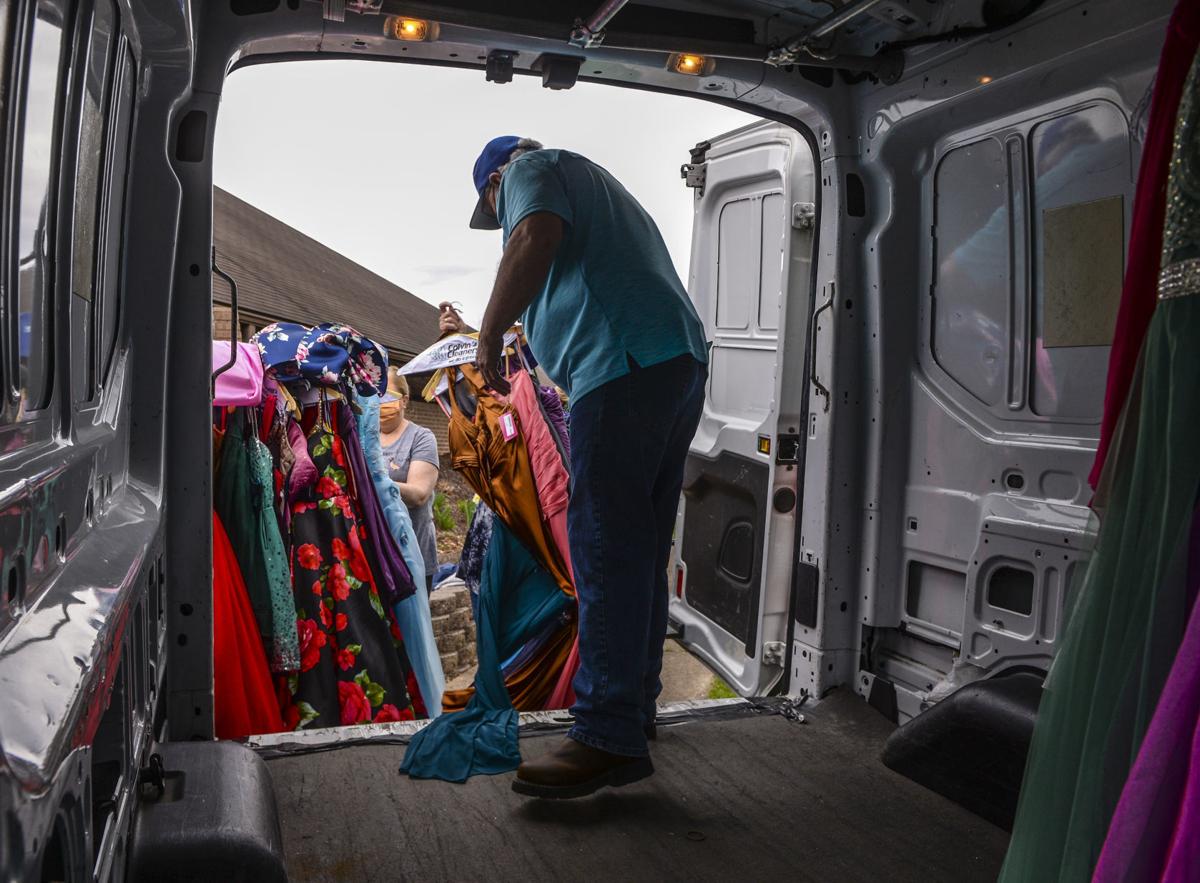 Driver Dan Kryszak hands dresses from his van to a volunteer for Ronda’s Closet. 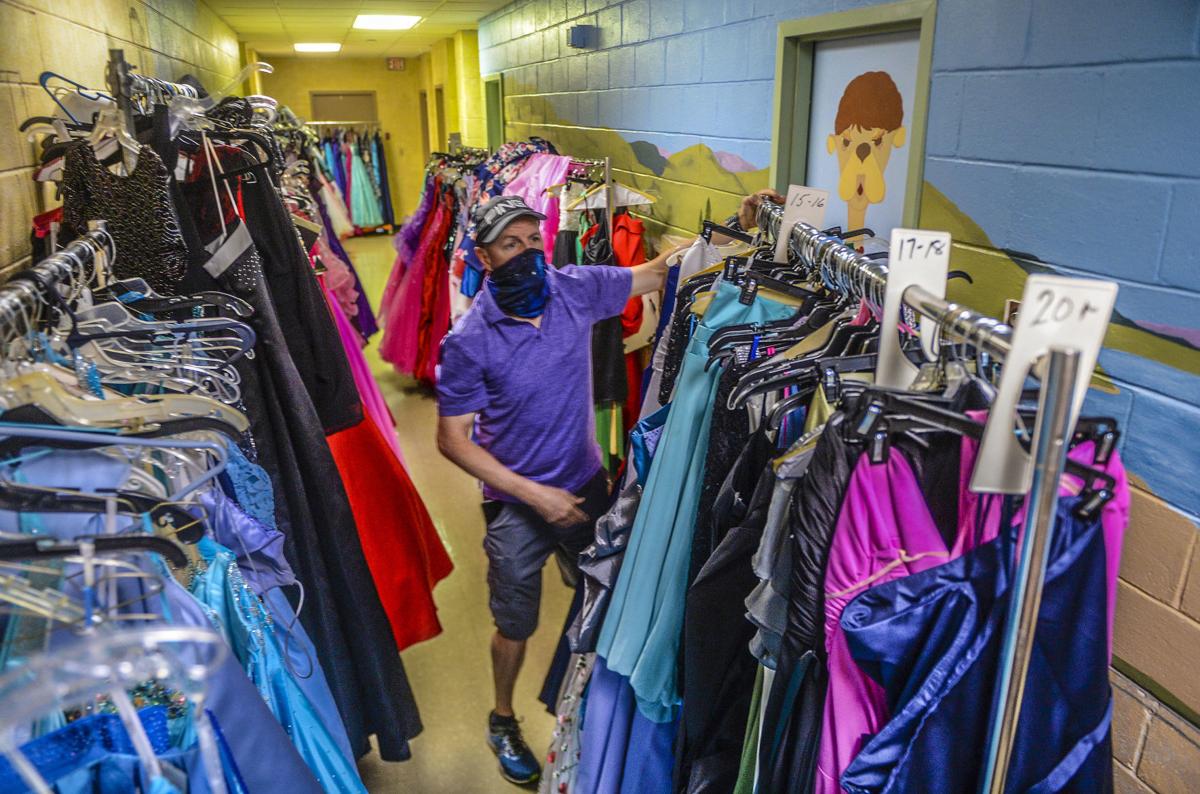 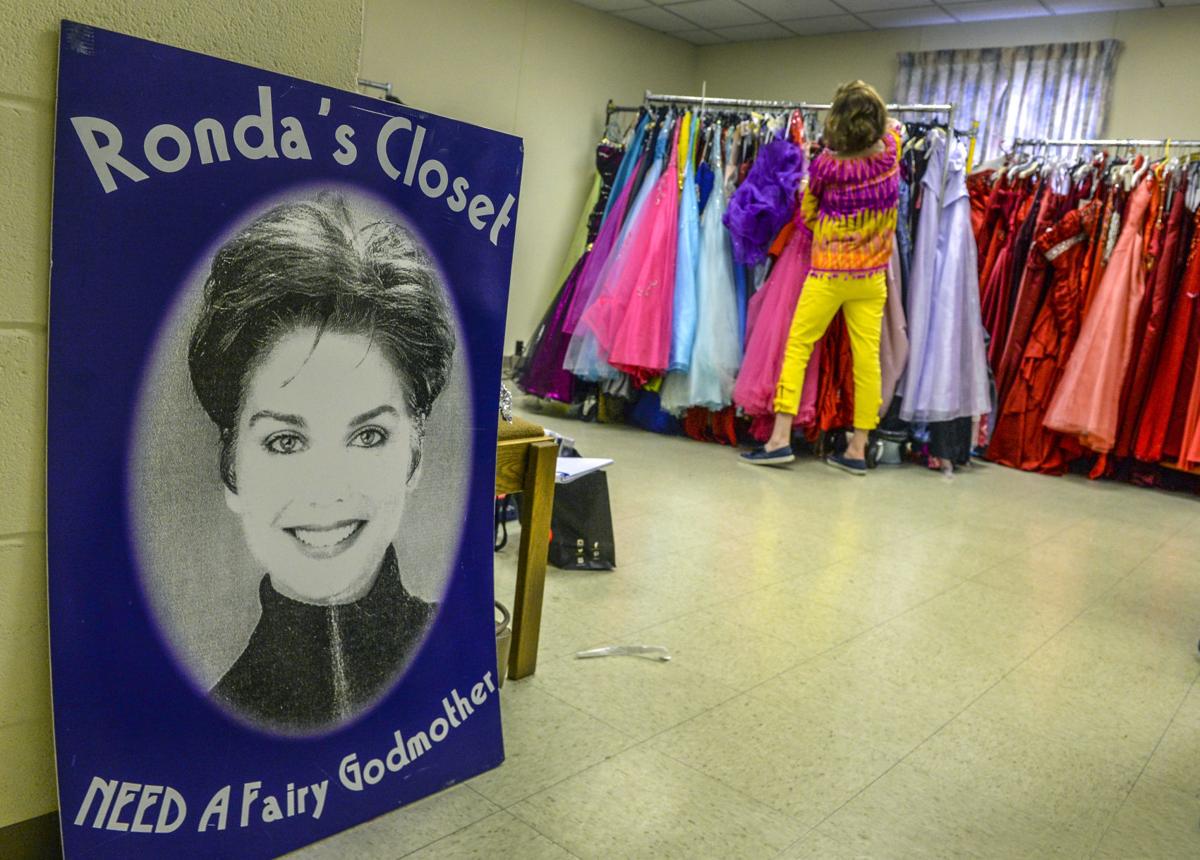 Julia Black hangs some of the new gowns donated to Ronda’s Closet for the upcoming prom season. 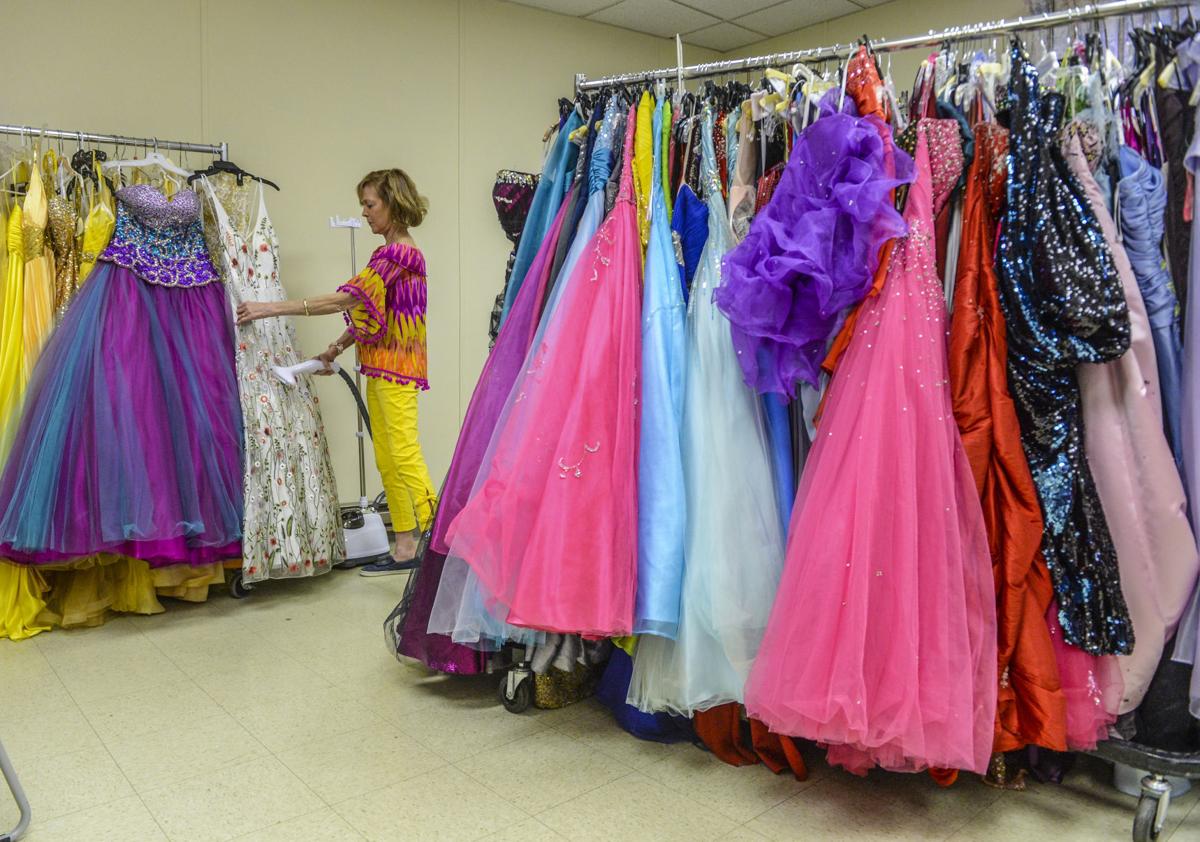 Julia Black steams one of her favorite new dresses on the racks at Ronda’s Closet, where high school students will be able to choose gowns they never thought they could afford.

Julia Black hangs some of the new gowns donated to Ronda’s Closet for the upcoming prom season.

Julia Black steams one of her favorite new dresses on the racks at Ronda’s Closet, where high school students will be able to choose gowns they never thought they could afford.

If your vocabulary for colors is limited to the primaries — to simply red, yellow or blue — you’ll have a hard time describing the hundreds of elegant gowns that were trucked in from New York to Sissonville on a dreary, overcast day last week.

“Oh, that one’s pretty,” called a volunteer, on hand to help transfer the sequins and sparkles, the satin, chiffon, organza and crepe to Ronda’s Closet at Aldersgate United Methodist Church. The program provides free prom dresses to girls who need them — and even has a selection of shoes to complete the look.

“Someone could get married in this,” says another volunteer, admiring a lacy, cream number dangling from a hanger.

There’s an entire alphabet of shades, from amber to zinc here. And you’ll still need a sophisticated wealth of words to capture the hues and the shades, the glitter and glow, the shimmer and shine of so much anticipation under a single roof.

Prom is quite simply “the most important day of a girl’s high school years,” said Denise Blair, one of the volunteers. “You’re with your friends. You get all dressed up. You’re like a princess for a day, you just really are.”

And therein lies the real magic of these gowns. If they can light up the skies on a cloudy day, imagine what they can do for a young woman on the cusp of adulthood, stepping gingerly toward her future in less-than-ideal circumstances.

“Prom’s a rite of passage. You’re transitioning between high school and being really grown up,” said Julia Black, who started Ronda’s Closet with her daughter, Kristin, 16 years ago, to help girls who couldn’t afford the cost of all that glamour for a single night.

“If you couldn’t go because you couldn’t afford a prom dress, that would just be a really sad thing,” she said.

Kanawha County schools canceled proms in 2020 due to COVID-19. This year, the district tentatively plans outdoor proms for all eight high schools — an announcement earlier this month that sent Black into something close to panic mode.

Fortunately, she had a friend who had a friend who knew someone near Buffalo, New York — and in the blink of an eye, she was talking to Paul Billoni, whose family has owned Colvin Cleaners since 1931. Their “Gowns for Prom” program has been on hold for the past two years — but gowns have kept coming in.

“I was talking to Julia and she was just like, ‘You know what? We just found out there’s gonna be a prom, and we really don’t have a big selection of dresses like we would like to have,’ ” said Billoni.

It’s a mission he feels strongly about.

“There’s not a day that I’m involved with ‘Gowns for Prom’ that at some point I don’t have tears in my eyes, you know?”

“I was just in shock and elated. That is so awesome,” she said.

Prom, for all its glory, is out of reach for many people. And that, said Black and her small army of volunteers, is what they hope to avoid.

“Every girl dreams about going to prom, especially when you’re a senior,” said Black.

“Maybe they wouldn’t get to go have their wonderful prom night if they couldn’t afford a prom dress.”

This year may be harder than ever, she added.

“There are so many people having financial issues because of COVID.”

To pastor Danny Kinder, the dresses are all part of a bigger picture.

“To have somebody in New York say, ‘We’re not having proms. We wanna donate brand new dresses.’ It’s amazing. It’s God at work,” he said.

Ronda’s Closet is housed at Aldersgate United Methodist Church, located at 6823 Sissonville Drive in Charleston. It’s open, with social distancing and masks required, from 12:30 to 3 p.m. on Sundays.

“If we have a lot show up at once, they might have to wait outside while some other girls finish,” said Black.

But that, she added, is one challenge she’s happy to have.

“When the girls get their dress that they love and they are just beaming, it’s a blast. It really is a lot of fun,” she said.