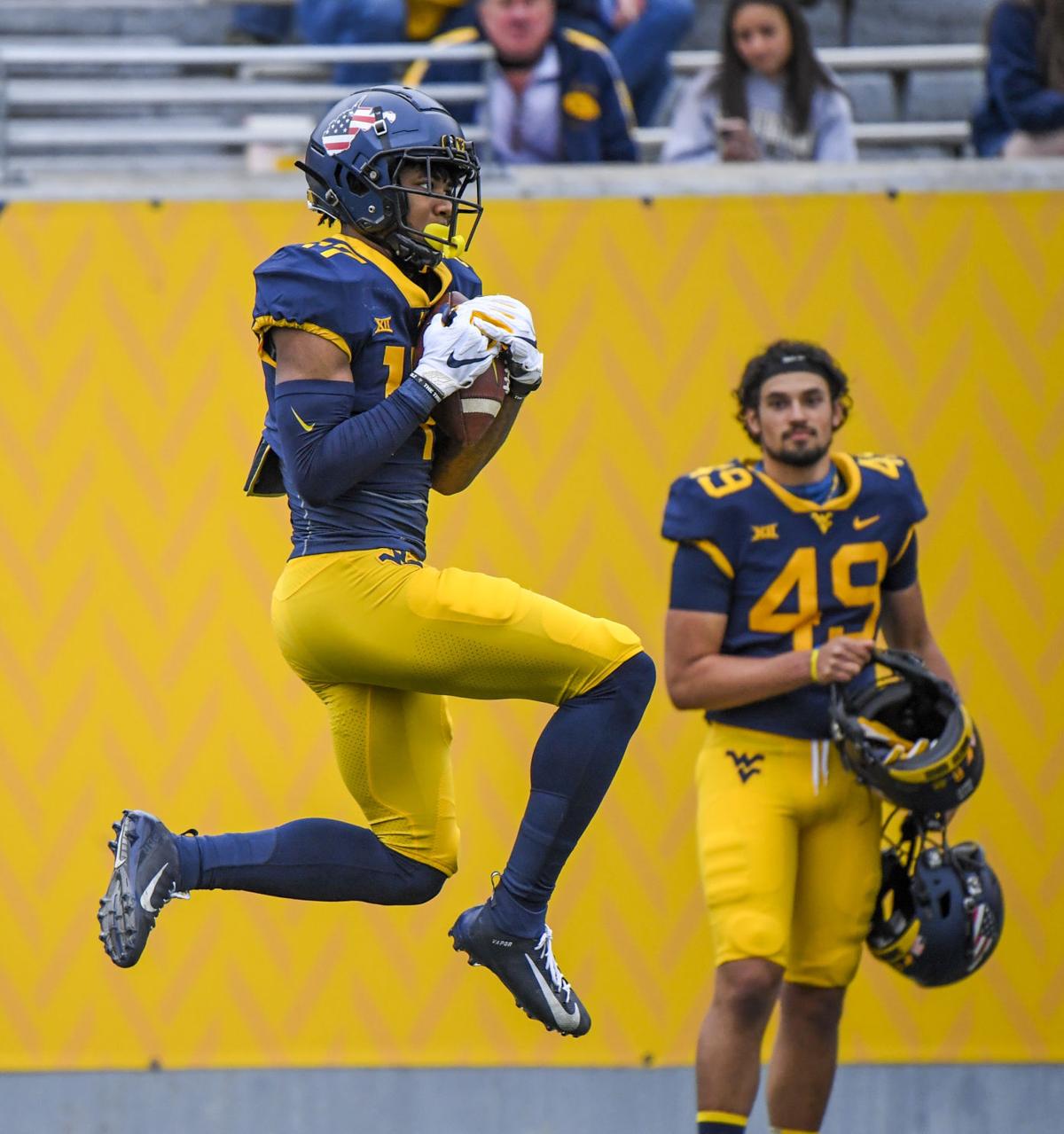 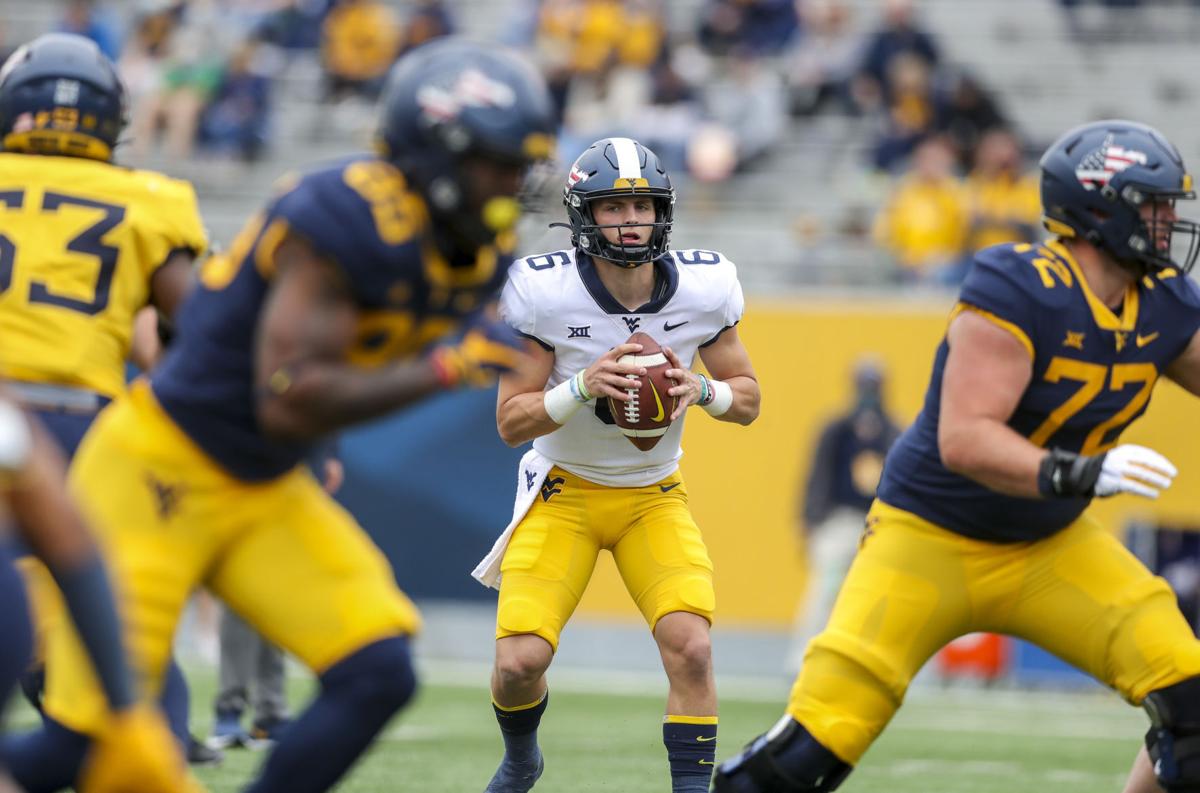 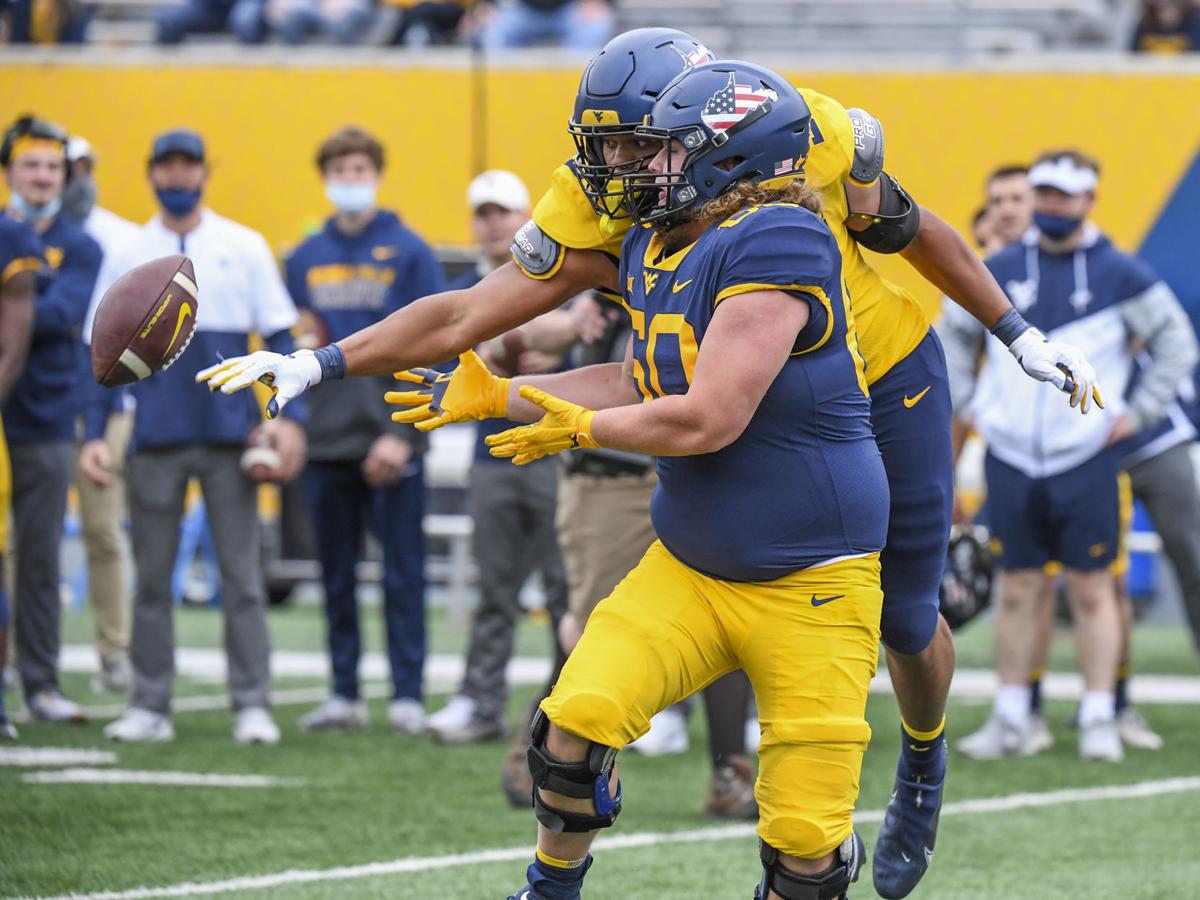 WVU defensive lineman Brayden Dudley, rear, breaks up a pass intended for offensive lineman Noah Drummond (60) in the “big-man challenge” during Saturday’s Gold-Blue game at Milan Puskar Stadium in Morgantown. The play turned out to be the deciding point in the Gold’s 39-38 win in the annual spring game.

WVU defensive lineman Brayden Dudley, rear, breaks up a pass intended for offensive lineman Noah Drummond (60) in the “big-man challenge” during Saturday’s Gold-Blue game at Milan Puskar Stadium in Morgantown. The play turned out to be the deciding point in the Gold’s 39-38 win in the annual spring game.

Instead, it was stretches of scrimmaging broken up by individual drills and awards presentations complete with one notable guest appearance, Mountaineer basketball point guard Miles “Deuce” McBride.

But while it wasn’t necessarily a game, all of it was steeped in competition, and that was the theme of the day and the spring.

Everything, including the drills, were scored and tracked, and by the end the Gold team, composed mostly of the first-team offense and second-team defense, edged the Blue team (vice versa) 39-38. The event aired on Big 12 Now and ESPN+, with a crowd of 8,312 in attendance.

With things tied up at 38 at the end of the scrimmage portion of the practice, the team’s big-man challenge decided the winning team. Backup quarterback Garrett Greene lined up with redshirt junior offensive lineman Noah Drummond playing wideout and freshman defensive lineman Brayden Dudley playing defensive back. Dudley broke up Greene’s attempted pass, giving the Gold team its deciding point.

That fully encapsulated the mood of the day — some fun, some focus and competition in everything.

“We wanted to have fun, wanted our players to really enjoy the opportunity to compete in front of fans whether they were here in the stadium, listening on the radio or watching on ESPN+,” Brown said. “We wanted everybody watching to enjoy it as well. We wanted to continue to compete and the final thing is we wanted to play clean football.

“I hope a defining characteristic of our program is we don’t beat ourselves. What does that mean? Well, it means not having selfish penalties, reducing your procedural penalties, not having missed assignments, making sure you communicate well and most importantly you take care of the ball offensively. And so, we wanted to play relatively clean football, and I thought we accomplished that.”

The scrimmage portion of the practice resulted in a 16-16 tie, with the rest of the points coming from drill winners.

The two biggest plays from the scrimmage came at the end. Reserve safety Avery Wilcox intercepted a tipped throw from Will Crowder and sprinted 46 yards to the end zone for a Gold touchdown, and on the ensuing play for the Blue, Crowder hit sophomore Sam Brown on a 65-yard touchdown strike. Those two plays concluded the scrimmage scoring.

In terms of drills, special teams factored in heavily, with plenty of kicking contests — pooch kicking, kickoff contests decided by a mix of hang time, distance and placement and field goal kicking. There were one-on-one pass rush/pass blocking drills and a one-on-one “avoid drill,” in which players mimic a special-teams scenario by trying to block a rushing defender while retreating.

But perhaps the highlight of the day — and certainly the drills — was a quarterback competition among Doege, Greene and McBride, who was introduced to the fans in attendance.

McBride, a decorated high school quarterback from Moeller High School in Cincinnati, participated as the three quarterbacks each got three attempts at three different drills — a set of quick screen-pass throws, a series of throws on the run and a fade pattern contest in which the three quarterbacks attempted to throw the ball into a net in the back corner of the end zone from the 19-yard line.

In the end, Doege was the winner, hitting a screen-pass target and putting two into the net on the fade throw. Greene hit a screen pass and nothing else while McBride drew loud cheers by hitting his last fade-pattern attempt.

“What we want to do is make the game as entertaining as possible; we did some things like this at Troy,” Brown said. “I’m a basketball fan and had an event with (WVU basketball coach Bob Huggins) last week and mentioned it to him and he said as long as there’s no gear involved, he’s good. Deuce said, ‘I’ve just got to have a jersey with my name on it,’ so I said, ‘Well, we can work that out.’

“Because every basketball game I’ve watched it’s always mentioned he played quarterback at Moeller. I figured the fans would enjoy it and they did, and he was a great sport about it.”