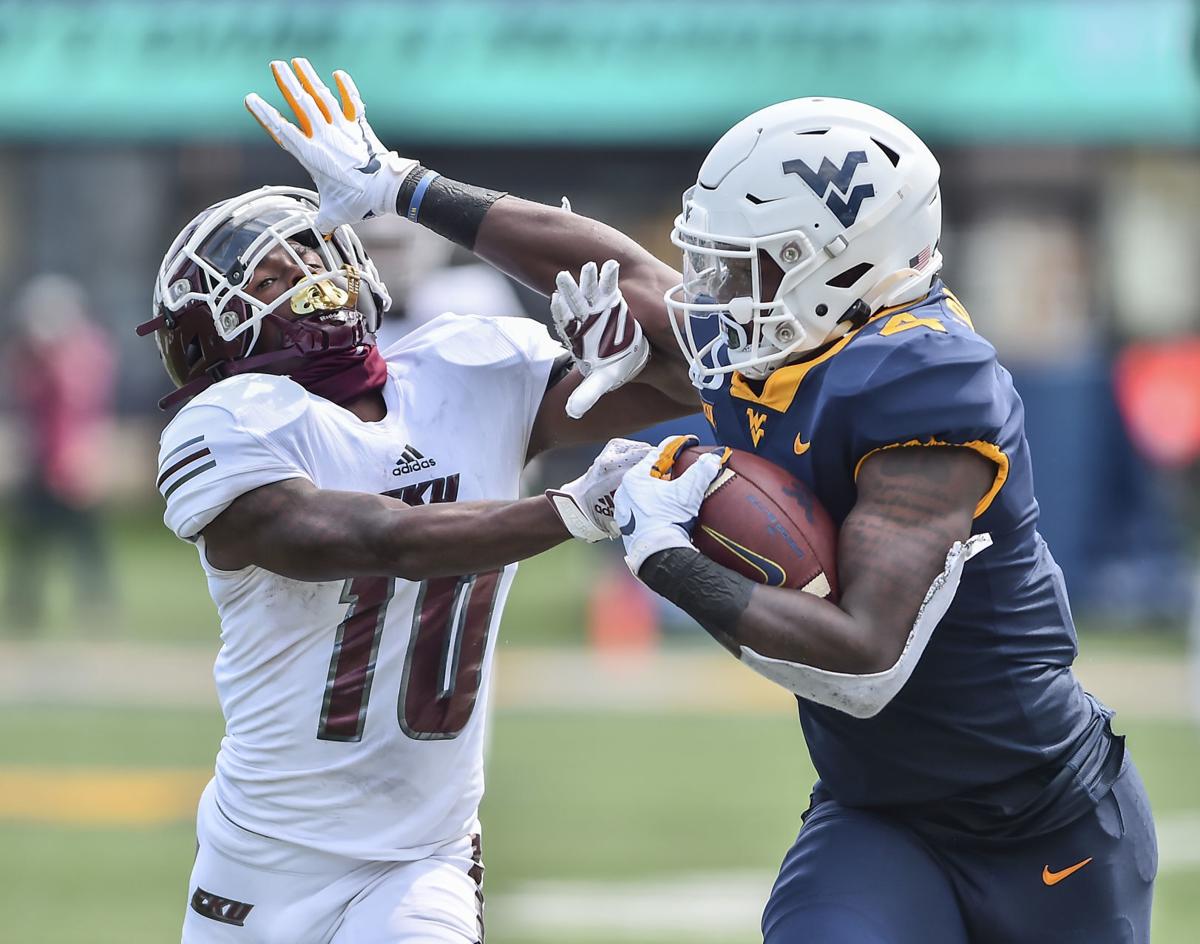 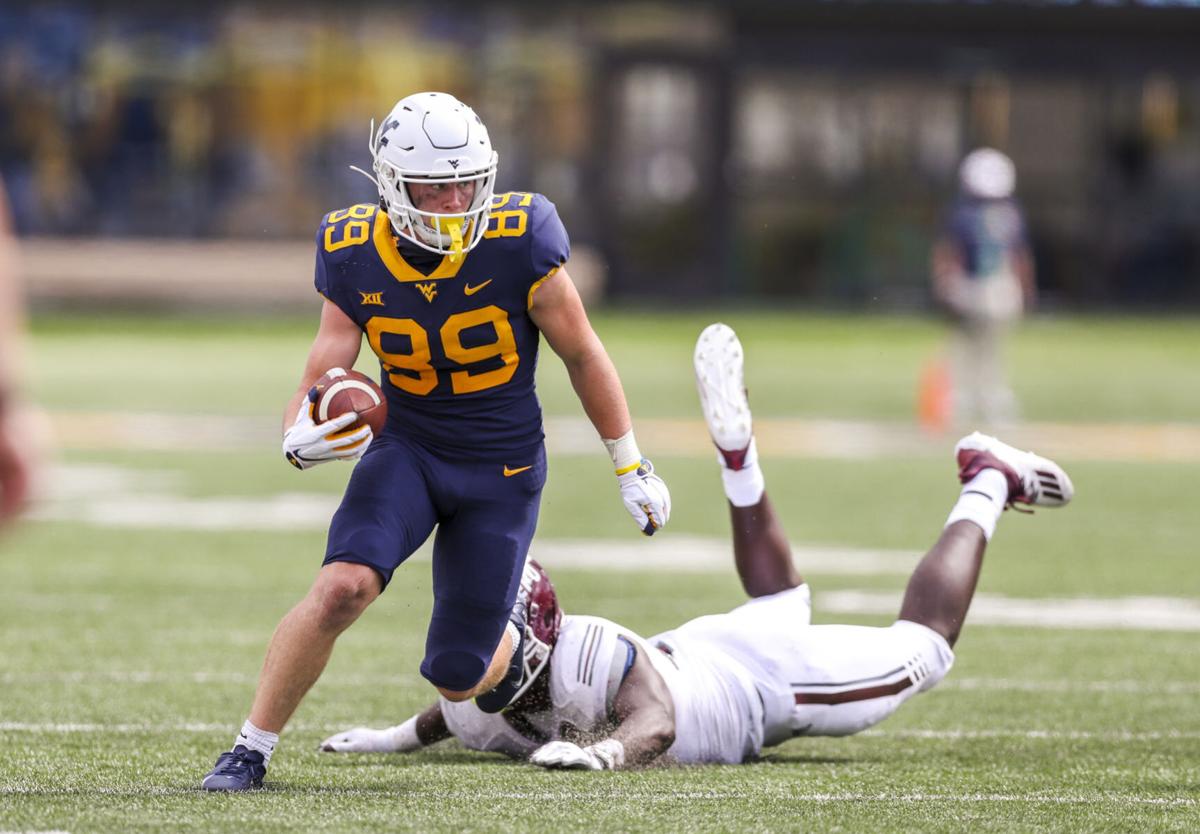 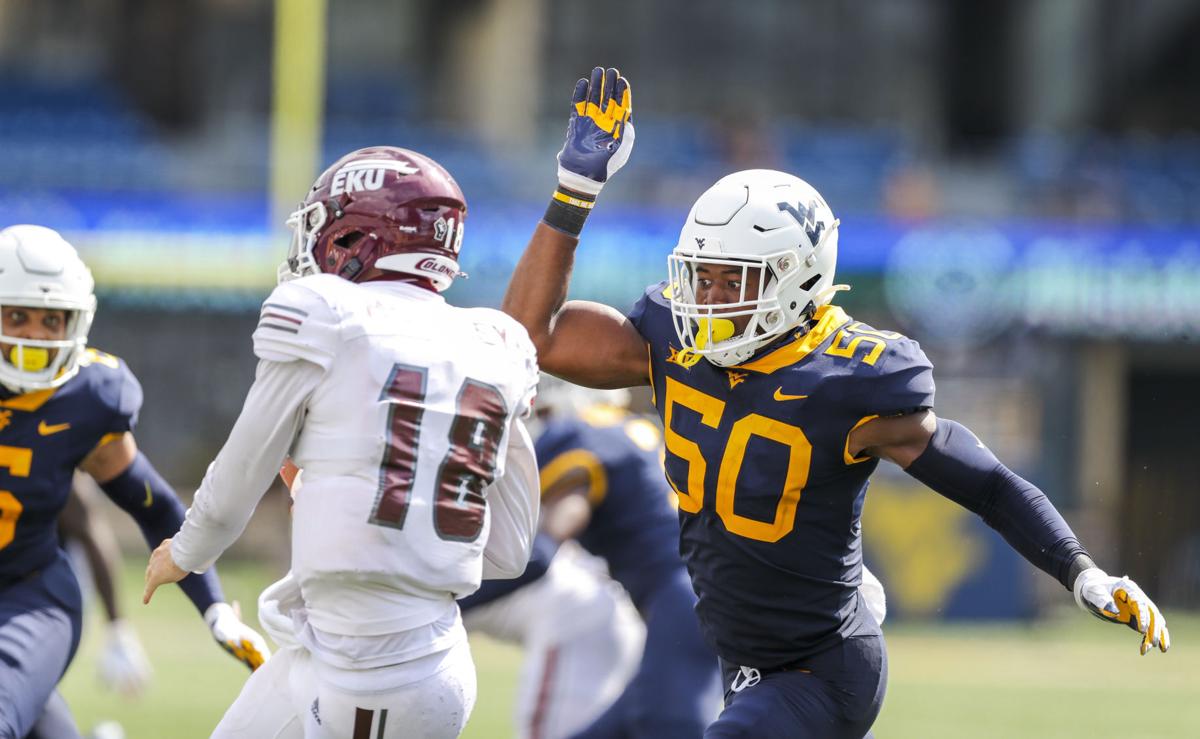 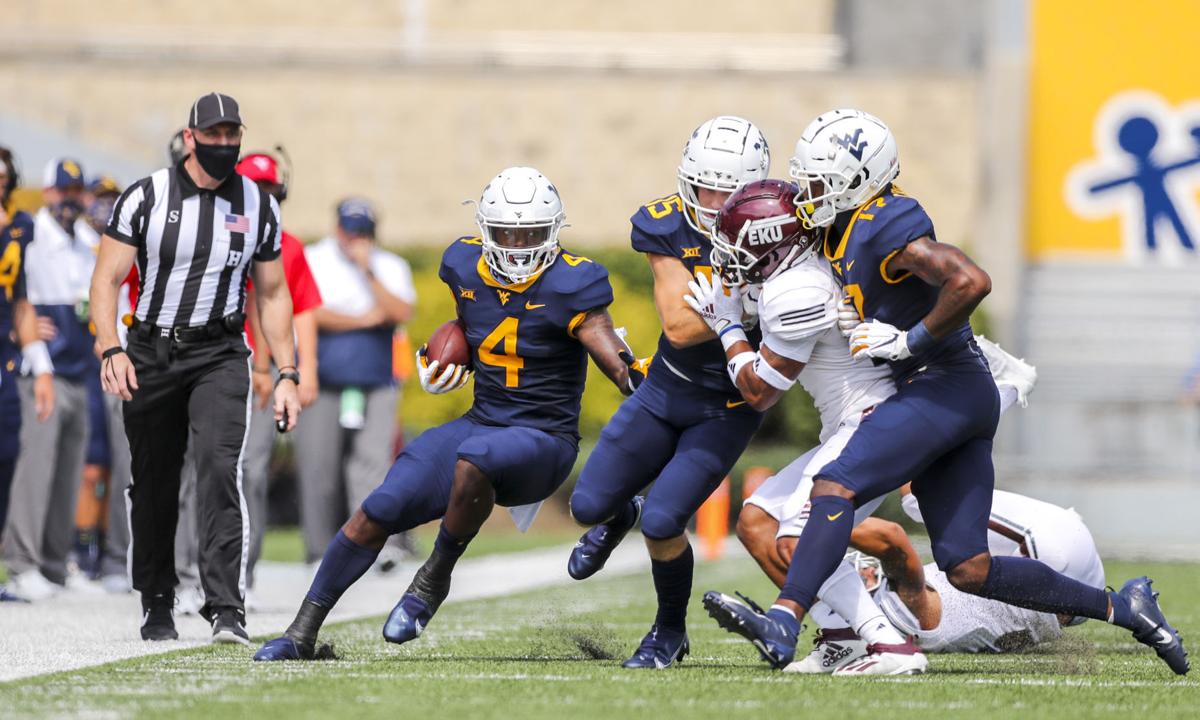 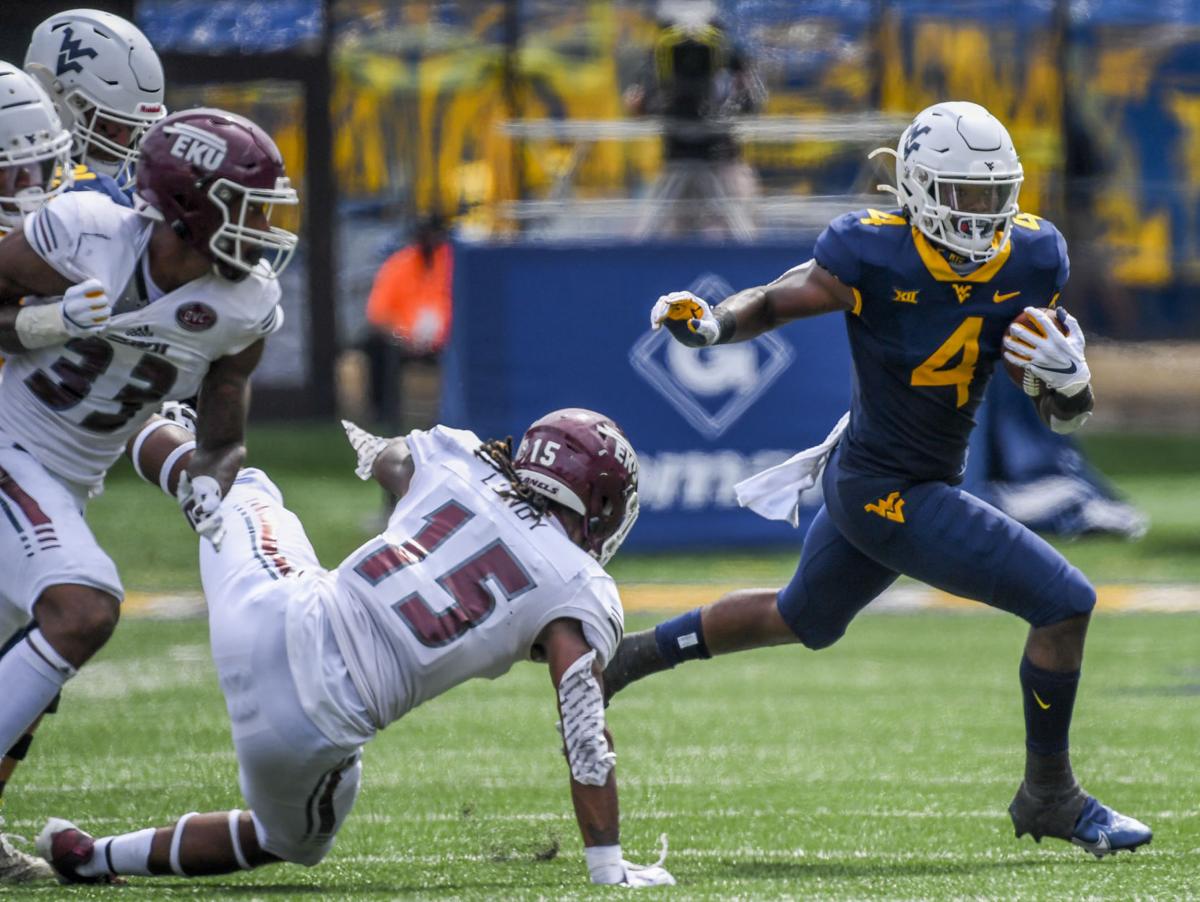 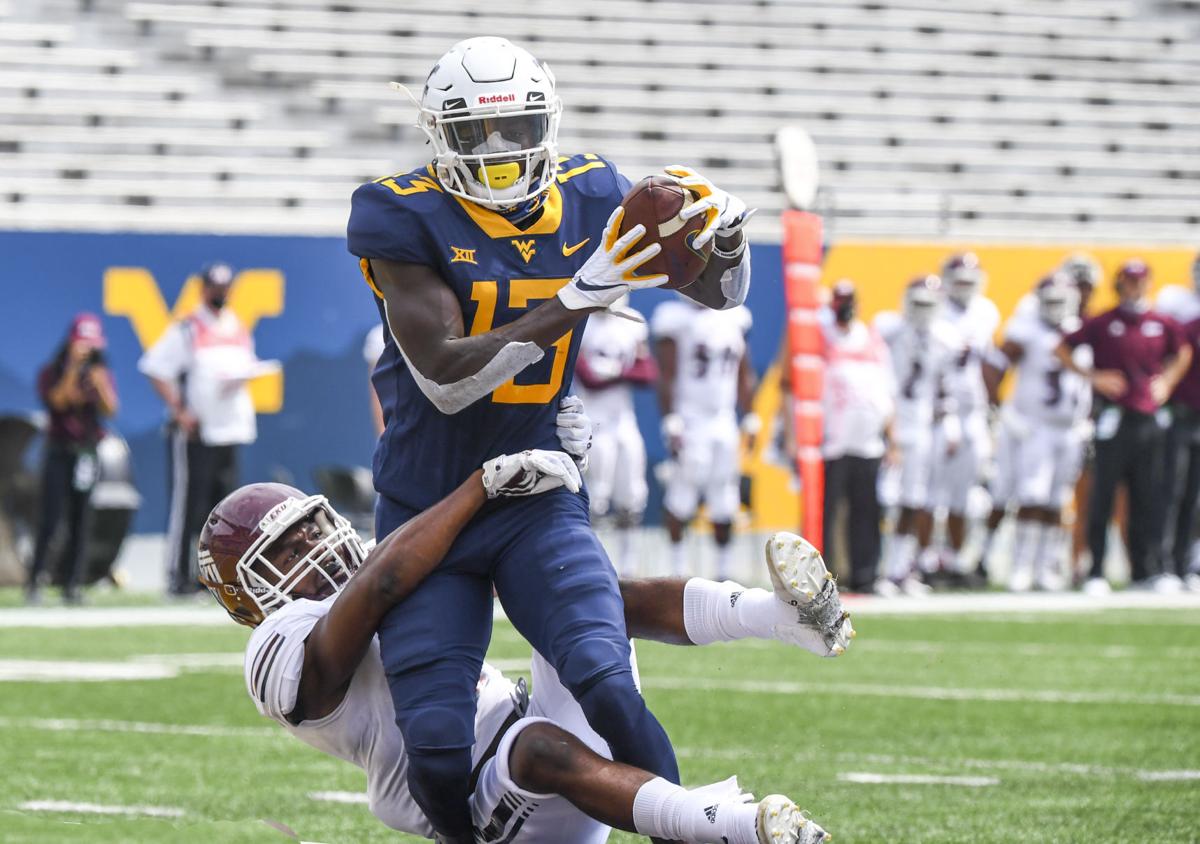 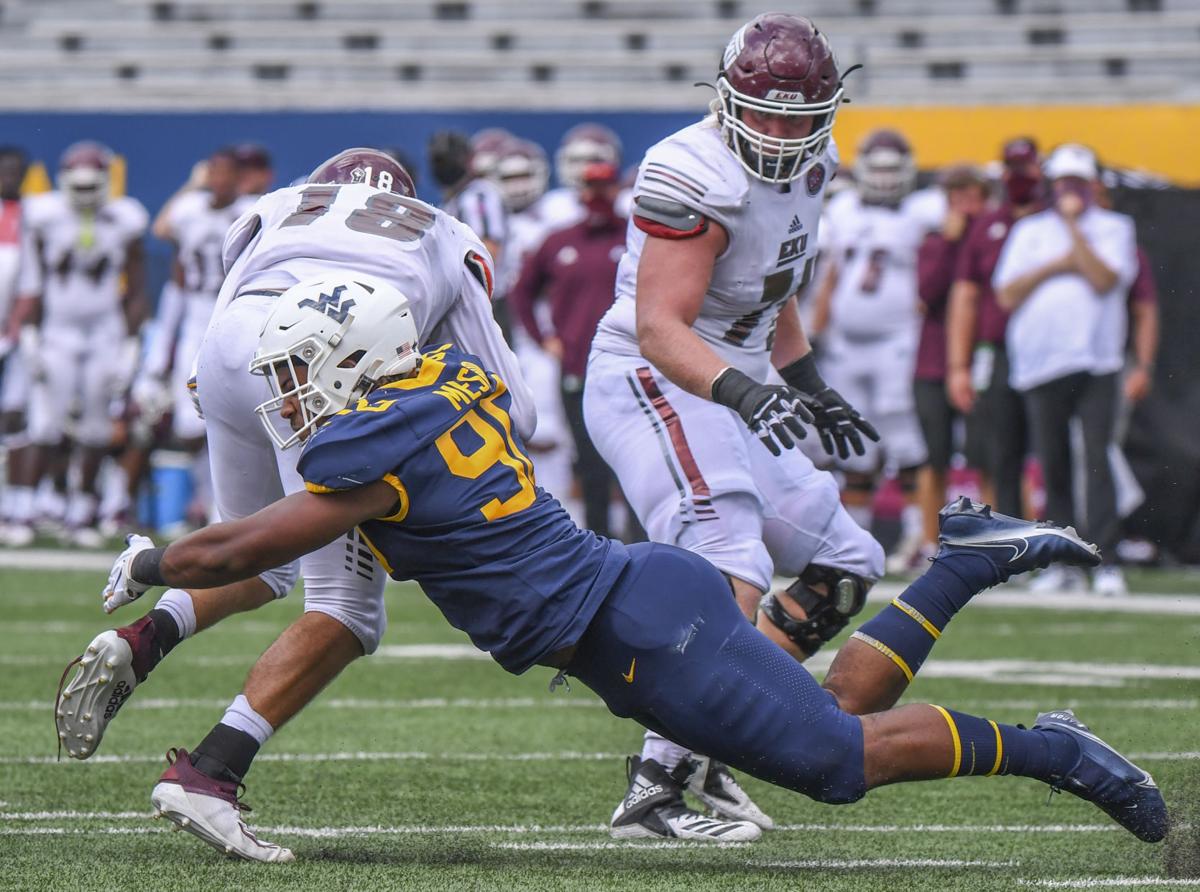 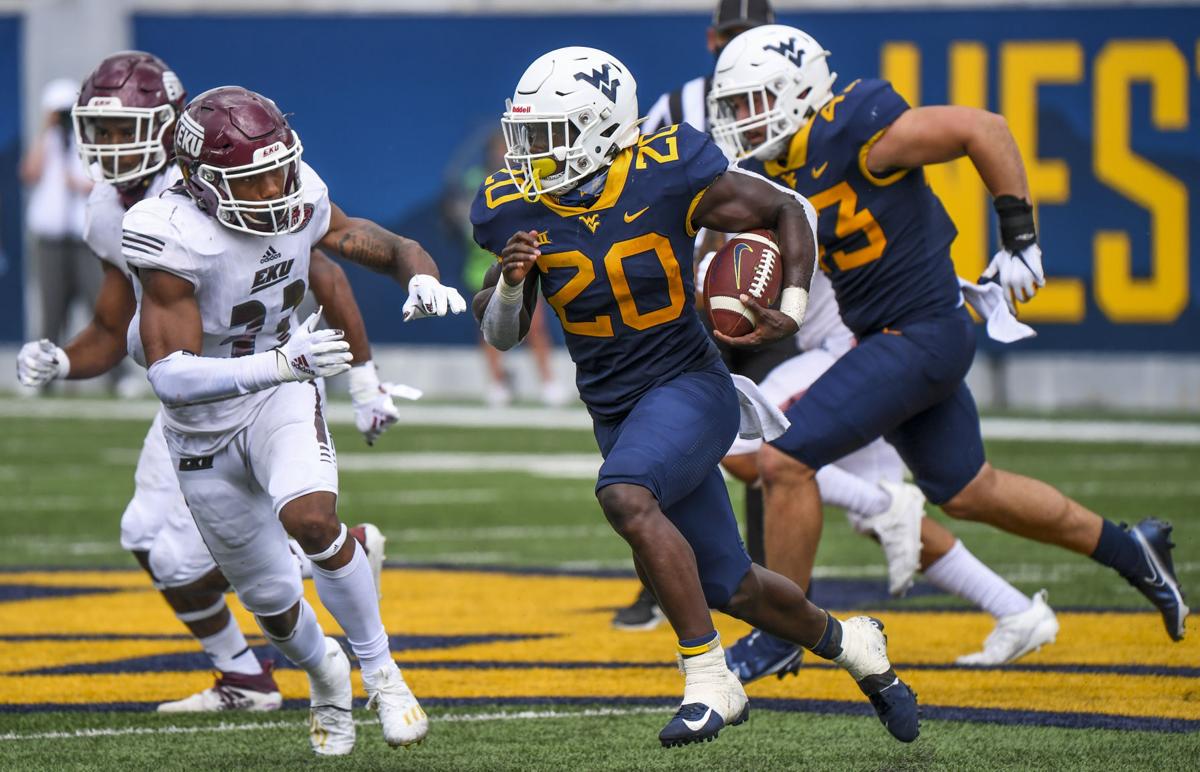 MORGANTOWN — At least for one game — albeit against an undermanned and overmatched opponent — the Mountaineers’ No. 1 point of emphasis in the offseason was a strength instead of a concern.

The running game that WVU has so desperately needed was on full display Saturday as the Mountaineers piled up 329 rushing yards in blistering Eastern Kentucky 56-10 at a mostly empty Milan Puskar Stadium. An official crowd, made up of the families of players, of 976 was announced.

Running backs Leddie Brown and Alec Sinkfield each piled up 123 yards on the ground and combined for five touchdowns to spearhead a running game that helped set the tempo early and salt things away late.

“We were very balanced today,” WVU coach Neal Brown said. “We ran the ball better, and I think that’s a credit to the offensive line and a couple of tight ends that haven’t played a lot — Jackson Knipper and Charles Finley did a nice job. Then to have two 100-yard rushers, I felt like Leddie and Sinkfield had nice camps, so to see them get rewarded today was good.”

The Mountaineers posted those totals without two starters on the offensive line, with left tackle Junior Uzebu and center Chase Behrndt — as well as both tight ends on the original two-deep depth chart (T.J. Banks and Mike O’Laughlin) — among 11 players serving a one-game suspension for a violation of team rules. That announcement came around an hour prior to a 12:05 p.m. kickoff.

“They’ll be back with us (Sunday),” Neal Brown said of the suspended players, adding that the reasoning was not COVID-19 related. “I’m not going to get into it, but I love those guys and really believe a lot of them are going to be a huge part of the success we have this year and the success we have moving forward.”

WVU finished 128th out of 130 FBS teams in rushing yards per game a year ago, averaging just 73 per contest. Last season, the Mountaineers recorded two runs that went for longer than 30 yards. On Saturday, Leddie Brown had two of those by himself.

Saturday also marked the first time WVU had eclipsed 300 rushing yards since Dec. 2, 2016, in a game against Baylor, and it was also the first time two WVU ball carriers ran for over 100 yards since Justin Crawford and Kennedy McKow did it at Kansas on Sept. 23, 2017.

With Leddie Brown’s straight-ahead power runs and Sinkfield’s elusive quickness, the Mountaineers showed a potent one-two punch in the backfield. It’s one that Neal Brown hopes to produce moving forward.

“We put a plan together and it really started in the month of November, about how we had to get better because you’re not going to be a championship program and win at an elite level in the Big 12 unless you can run the ball and start the run,” Neal Brown said. “This is just the start. Just because we did it today doesn’t mean all of the sudden we’ve arrived running the football. But it was a start.”

Meanwhile, junior quarterback Jarret Doege was solid in just a half of playing time, connecting on 19 of 25 passes for 228 yards and three touchdowns. His 8-yard connection to Bryce Ford-Wheaton with just 31 seconds remaining in the second half put WVU up 42-7 at the break and accounted for his last play of the game.

“It was just go out there, prepare and play,” Doege said. “I felt good. We’ve had a ton of practices counting OTAs, camp, walk-throughs, so I think our timing was pretty good.”

Leddie Brown accounted for all of the scoring in the first quarter, capping WVU’s first drive with a 10-yard scoring run and then hauling in a 15-yard touchdown reception from Doege to put the Mountaineers up 14-0.

After James was on the receiving end of a 32-yard touchdown toss from Doege with 12:59 left in the second quarter, EKU scored for the first time in five-plus periods with quarterback Parker McKinney hitting a wide-open Keyion Dixon from 28 yards out to make the score 21-7.

But from there it was all WVU as Sinkfield and Leddie Brown tacked on 8-yard scoring runs leading up to Doege’s toss to Ford-Wheaton just before the break.

Alonzo Booth led Eastern Kentucky with 45 yards on seven carries, with Parker McKinney throwing for 131 yards on 9-of-17 passing.