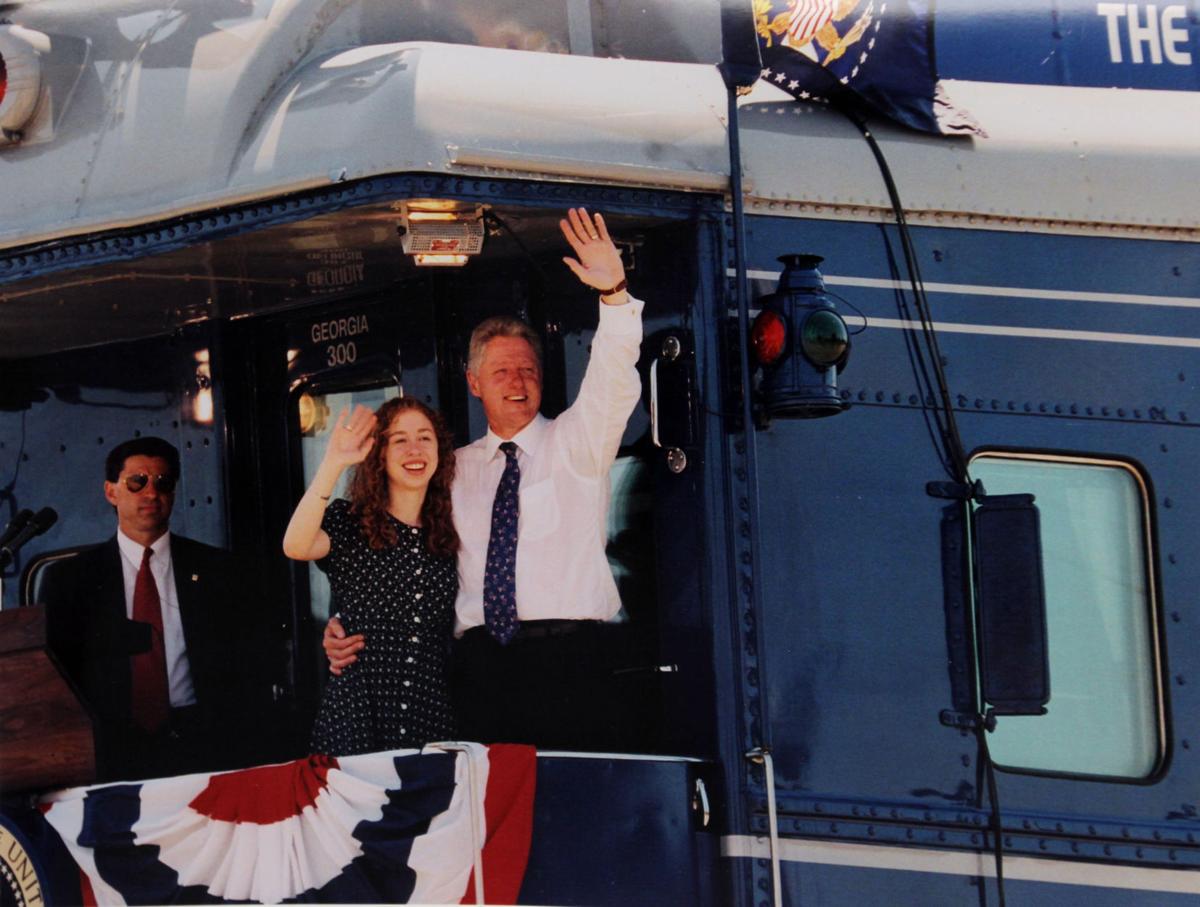 Courtesy of Bob Withers President Bill Clinton and his daughter Chelsea wave goodbye to the crowd in Huntington aboard his Twenty-First Century Express on Sunday, Aug. 25, 1996, as Secret Service agent Scott Alswang keeps a watchful eye. 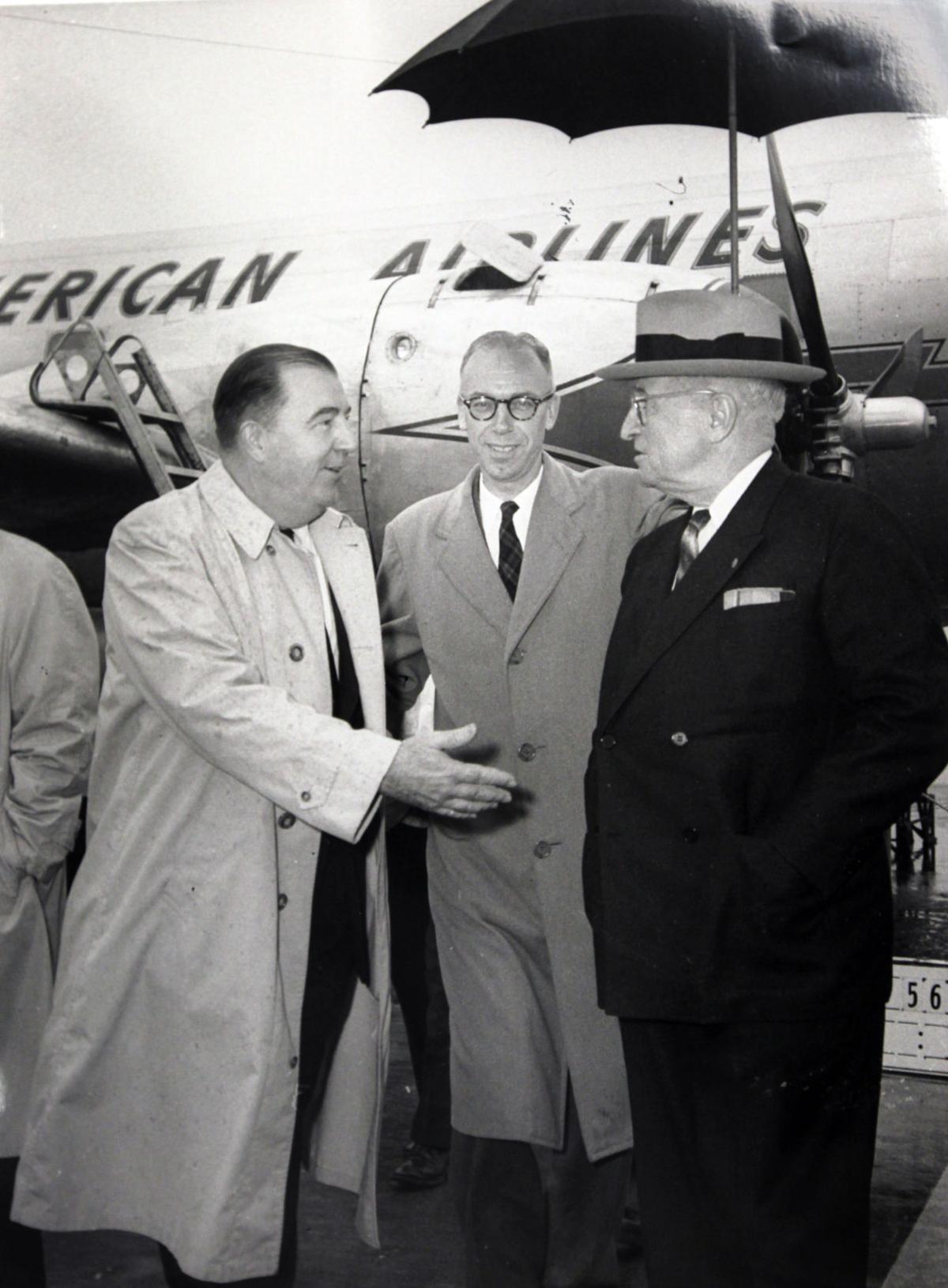 Courtesy of Bob Withers Former President Harry S. Truman, right, visits with Jennings Randolph, left, and Ken Hechler after landing at Charleston?s airport on Sept. 20, 1958, Hechler?s 44th birthday. Hechler served as one of Truman?s speechwriters for a while. Randolph, a former congressman, was running for the Senate to replace the late Matthew Neely. 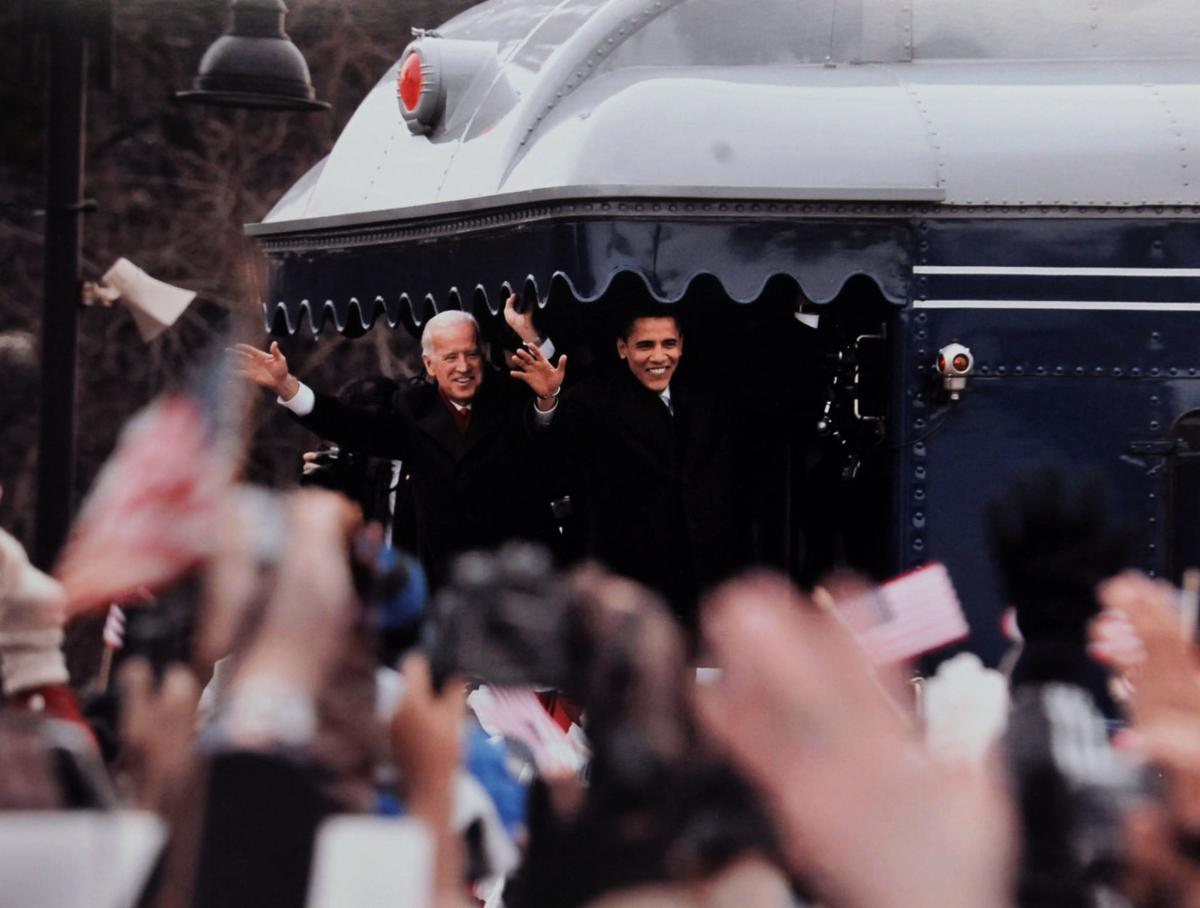 Courtesy of Bob Withers President Bill Clinton and his daughter Chelsea wave goodbye to the crowd in Huntington aboard his Twenty-First Century Express on Sunday, Aug. 25, 1996, as Secret Service agent Scott Alswang keeps a watchful eye.

Courtesy of Bob Withers Former President Harry S. Truman, right, visits with Jennings Randolph, left, and Ken Hechler after landing at Charleston?s airport on Sept. 20, 1958, Hechler?s 44th birthday. Hechler served as one of Truman?s speechwriters for a while. Randolph, a former congressman, was running for the Senate to replace the late Matthew Neely.

HUNTINGTON - Huntington and many railroad towns were once major stops on the presidential campaign trail.

Today, candidates travel primarily by air and bus, but for more than 100 years, candidates used the nation's railroads to press the flesh with the American people. Nine former presidents and a number of other presidential candidates visited the Tri-State by rail.

It has been 20 years since Bill Clinton made the last presidential campaign whistle stop in Huntington. This year, there are no announced plans for either Donald Trump or Hillary Clinton to come to Huntington at all - much less by rail.

But from the late 1800s until the mid-1950s, few candidates bypassed the Tri-State.

Arthur's trip began on the morning of Monday, July 30, 1883. The ailing Arthur and several of his cabinet officers departed Washington en route to a month-long vacation at the 11-year-old Yellowstone National Park in Wyoming Territory. No one knew it at the time, but Arthur had contracted Bright's disease, a kidney disorder that would eventually take his life.

Their Chesapeake & Ohio Railway special, consisting of a baggage car and two palace coaches, one of which was outfitted as a diner, stopped at The Greenbrier resort in White Sulphur Springs for an overnight stay, then continued through Huntington to Louisville, where he opened the Southern Exposition.

Democrat William Jennings Bryan was the first presidential candidate to campaign by rail in a big way. He ran for office in 1896, 1900 and 1908, and was unsuccessful all three times. But he stopped at least once in Huntington during the 1896 campaign.

Former Republican President Theodore Roosevelt campaigned on his progressive "Bull Moose" ticket in 1912, traveling through West Virginia on the rear of C&O Train 3, the westbound Fast Flying Virginian. When he returned to Huntington from Cincinnati on April 4, he got into a "machine" (automobile) and spoke at the Cabell County Courthouse while his private car was transferred to the Baltimore & Ohio station (currently the Cabell-Huntington Convention and Visitors Bureau) on 2nd Avenue. Point Pleasant was among his stops on the rear of B&O Train 710.

Sen. Warren Harding, R-Ohio, planned a four-day, five-state swing between Marion, Ohio, and Baltimore, Maryland, for Sept. 26-29, 1920. Harding and his wife, Florence, escaped injury when an equalizer spring broke on their private car Ideal at Millwood, West Virginia, as their B&O whistle-stop special headed for Huntington on the 29th. The couple found themselves staggering about as the dancing car bumped along on the ties at 30 to 40 mph for 900 feet and across a trestle before stopping. Only timber guardrails along the edges of the ties kept the car from falling off the trestle into Little Mill Creek or the Ohio River.

Harding - with he and Florence riding another car on their train - had the presence of mind to incorporate the mishap into his stump speech a few minutes later in Mason City. He likened his candidacy to the bridge's guardrails and offered to protect Americans against the Democrats' "derailments."

After the stop in Huntington, the Hardings took the C&O to Ashland and back to Kenova, then the Norfolk & Western Railway to Columbus and the Pennsylvania Railroad back to Marion.

President Herbert Hoover spoke in Huntington on June 15, 1931, from the observation platform of Pullman private car Henry M. Stanley. He was heading for the Midwest on an eight-car C&O special.

Indiana Republican Wendell Willkie spoke in Ironton on Oct. 29, 1940, when his 16-car whistle-stop train arrived from Columbus on the N&W, and again in Huntington before C&O took the special to Cincinnati. His campaigning was not able to deny Democrat Franklin Roosevelt an unprecedented third term.

Roosevelt himself passed through Huntington on the morning of Sept. 9, 1940. He was on his way back to Washington after a three-day trip to Chattanooga and Knoxville, Tennessee, to dedicate the Tennessee Valley Authority's Chickamauga Dam on the Tennessee River and the Great Smoky Mountains National Park. He was on his way to inspect a naval ordnance plant in South Charleston, "motor" to a reception and news conference in Charleston, and return by rail to Washington.

His 10-car special train stopped at Huntington's C&O station for servicing and a crew change from 7:30 to 7:44 a.m., but Roosevelt did not emerge from his private car. Reporters were told he was resting preparatory to his stops in South Charleston and Charleston. But several local dignitaries boarded the train for the trip eastward.

Democrat President Harry S Truman (who inherited the job when Roosevelt died) spoke in Huntington on Oct. 1, 1948, near the end of a nationwide campaign tour. He spoke from the armor-plated Pullman private car Ferdinand Magellan, which was rebuilt for Roosevelt's secure use during World War II. Nearly everyone was surprised when Truman defeated New York Gov. Thomas E. Dewey in the Nov. 2 general election.

Incidentally, Ken Hechler, who would go on to be a 4th District congressman from West Virginia and West Virginia Secretary of State, worked as one of Truman's speechwriters for a while.

General Dwight D. Eisenhower spoke in Portsmouth (on N&W) and Kenova and Huntington (on B&O) when his 18-car Look Ahead Neighbor Special stopped at those points on Sept. 24, 1952. His talk in Huntington - from the rear platform of New York Central business car 17 - was the first to be covered locally by WSAZ Channel 5 (the station didn't move to channel 3 until the following year).

Eisenhower's body came through Huntington again on the morning of April 1, 1969, en route to burial in Abilene, Kansas. And on the way back from Kansas, when the train stopped to change crews in Huntington on April 4, Mamie Eisenhower came out on the rear platform of the AT&SF Railway private car Santa Fe to thank people for their concern and sympathy.

By this time, presidents and presidential candidates were spending more time in the air than on the rails. But George H.W. Bush ("Bush 41") broke with the new tradition and rode a 19-car campaign train from Columbus, Ohio, to Plymouth, Michigan, on Sept. 26, 1992, and Plymouth to Grand Blanc, Michigan, on Sept. 27. The train, which was assembled in Huntington, was pulled by two of CSX Transportation's month-old locomotives, 7812 and 7810. The lead unit was all decked out in a patriotic red, white, blue and yellow scheme that included American flags on its flanks and a phony number, 1992. Reserved for the president's use was CSX business car Baltimore, and protective trains preceded and followed the POTUS train (POTUS is an acronym for President of the United States).

Democrat President Bill Clinton rode Amtrak's 13-car Twenty-First Century Express from Huntington to Michigan City, Indiana, to convince Americans that the country was "on the right track to the 21st century" and to accept his party's nomination for a second term at the Democratic National Convention meeting in Chicago in 1996. His private car was the Georgia 300, owned by Fernandina Beach, Florida, mortician Jack Heard. Locally, Clinton spoke in Huntington and Ashland; Billy Ray Cyrus sang the national anthem at the latter stop. Interestingly, another route through Pittsburgh was considered that would have avoided Huntington, but Dick Morris, in his book "Rewriting History," says Hillary Clinton herself nixed it.

"She warned that the Secret Service 'will shut down the entire Eastern Seaboard just to embarrass us,'" Morris quoted Clinton's wife as saying. "'They're mostly Republicans. They hate us. They always take the most extreme option just to cause us embarrassment. We enter a city, and they close down all traffic. We can't go to Pittsburgh!'"

George W. Bush ("Bush 43") and running mate Dick Cheney campaigned in several states by rail in 2000, but when Bush campaigned in Huntington, he came by air and stayed overnight at the Radisson Hotel Huntington (now the Pullman Plaza Hotel).

The last POTUS movement by rail to date occurred on Jan. 17, 2009, when President-elect Obama; his wife, Michelle; their daughters, Malia and Sasha; and two nannies rode the Georgia 300 again on an Amtrak special from Philadelphia's 30th Street Station to Washington for his inauguration three days later.

The event was covered by television, and as the family was stepping across a gap between the high-level platform and the rear platform of the private car, Obama was heard warning his young daughters to be careful. "Don't fall through," he said. "That would really mess up our whole inauguration."

They stopped in Wilmington, Delaware, to pick up Vice President-elect Joe Biden (a frequent Amtrak passenger); his wife, Jill; and their daughter, Ashley.

Obama's inaugural committee invited 41 "everyday Americans" - in truth, handpicked folks who supported his policies and worked for his campaign - to go along. To avoid the perception of privilege, the Obamas and the Bidens ate box lunches just like everyone else.

Bob Withers is a retired Herald-Dispatch reporter and copy editor who pastors Seventh Avenue Baptist Church in Huntington. Much of the background information about local presidential visits comes from his first book, "The President Travels by Rail: Politics and Pullmans" (1996, Lynchburg, Virginia: TLC Publishing Inc.), which is now out of print.

An estimated 20,000 people packed the area in front of and around the CSX Transportation Business Unit in Huntington to see President Bill Cli…

Do you like the new community brand announced for the city of Huntington?