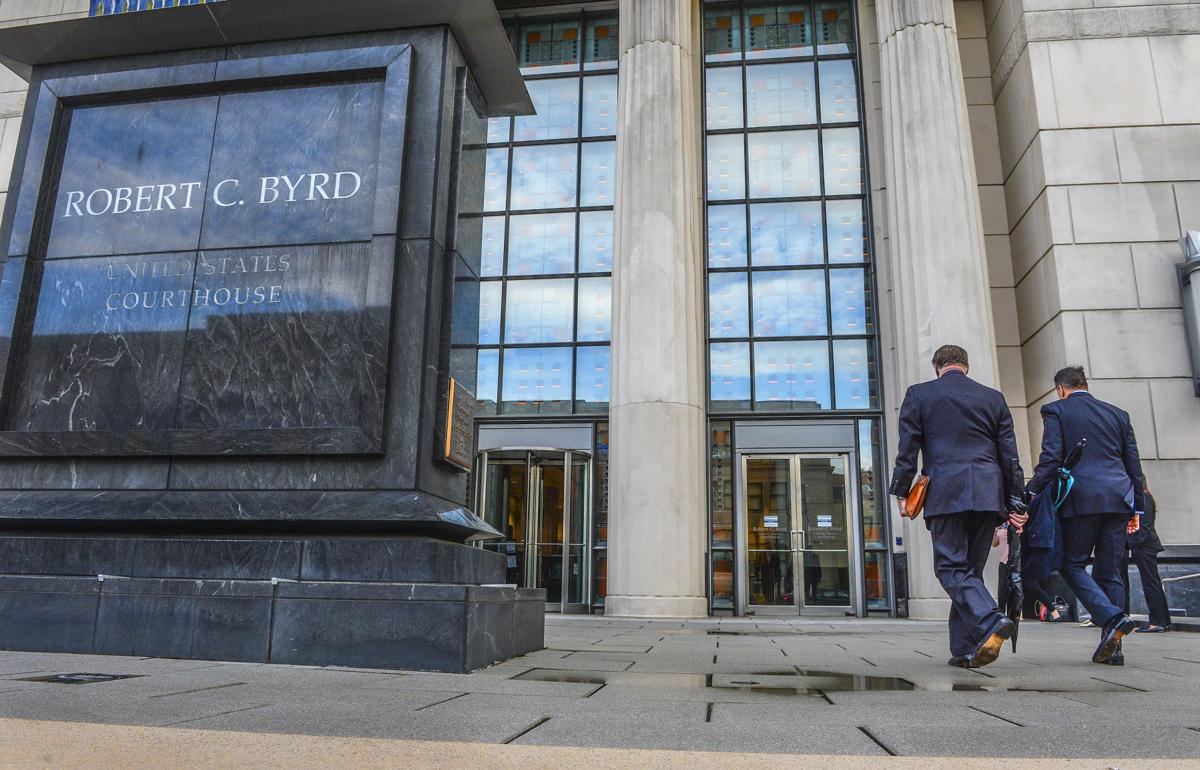 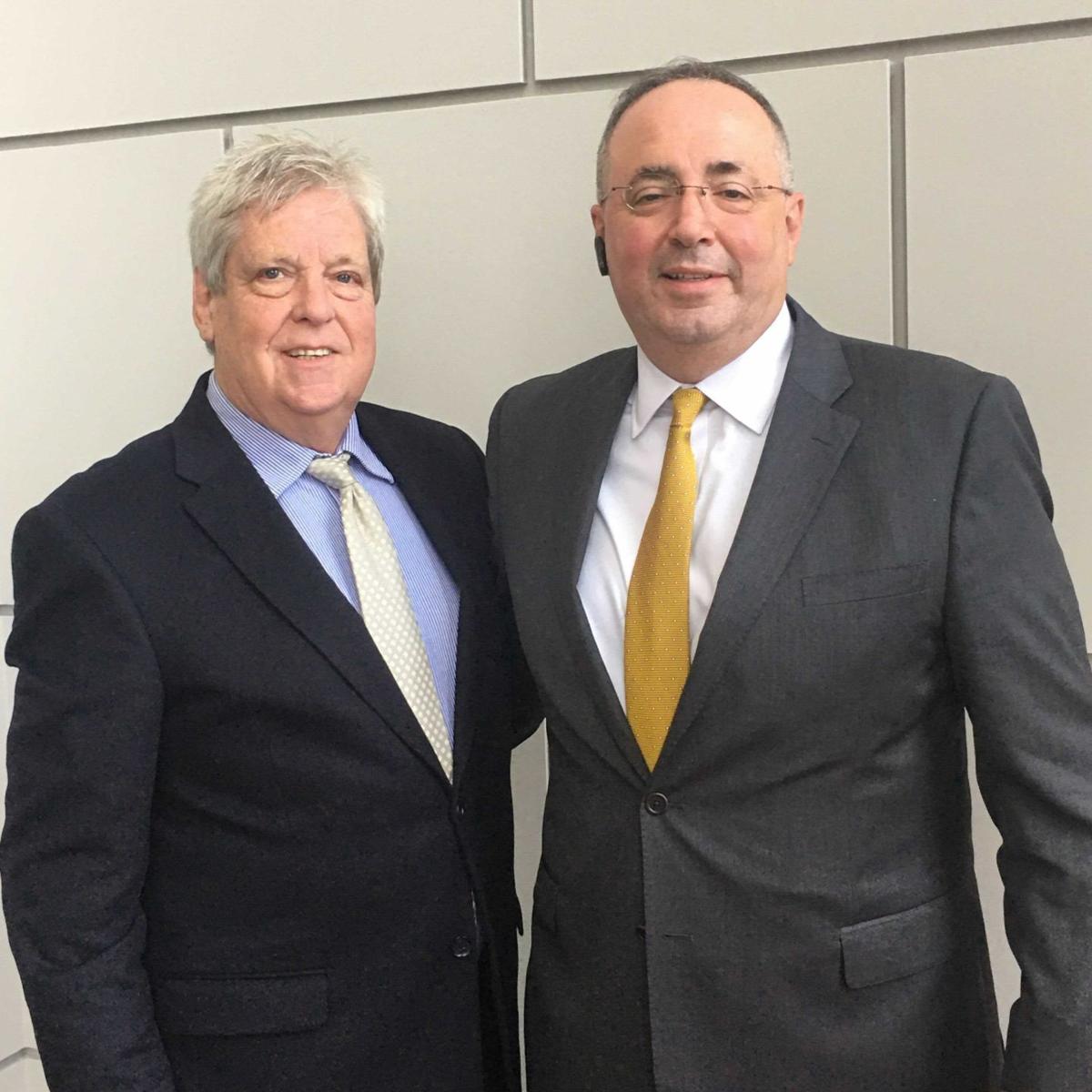 Mike Woelfel, a lawyer for Cabell County and state senator, is shown with Joe Rannazzisi, who served as head of the Office of Diversion Control for the Drug Enforcement Administration from 2006 to 2015, on Monday in Charleston.

Mike Woelfel, a lawyer for Cabell County and state senator, is shown with Joe Rannazzisi, who served as head of the Office of Diversion Control for the Drug Enforcement Administration from 2006 to 2015, on Monday in Charleston.

CHARLESTON — A retired high-ranking official for the Drug Enforcement Administration testified in Charleston on Monday that distributors accused of fueling the region’s opioid crisis were on alert they needed to rein in their distribution practices as early as 2005.

The distributors responded by bombarding the DEA with reports of their sales without indicating if they were suspicious or what the DEA should be investigating regarding the reports, said Joe Rannazzisi, head of the Office of Diversion Control for the DEA from 2006 to 2015.

Cabell County and the City of Huntington accuse the “Big Three” drug wholesalers — AmerisourceBergen, Cardinal Health and McKesson — sent excessive shipments of opioids into the area for eight years, before a reduction in the number of pills shipped made users turn to illicit drugs.

The defendants point to the DEA, doctors and West Virginians’ poor health as the culprits behind the crisis, but Rannazzisi attempted to ricochet those allegations on behalf of the DEA.

Rannazzisi, who got permission from the U.S. Department of Justice to testify to a limited window, said he felt compelled to speak out.

“I believe that facts should be presented in this case, as well as the other opioid cases ... because the public needs to be aware of what went on and this is my opportunity to do that,” he said.

Rannazzisi said prescription drugs cycle through a closed distribution system, starting with manufacturers and distributors, which ship pharmaceutical items to pharmacies, which then distribute pills to patients via prescriptions written by doctors. Each entity must register with the DEA.

The DEA does not work directly in that closed system, but instead provides guidance and investigates when needed. Guidance could range from sending a letter, making presentations or having one-on-one meetings and more.

With more than 1.6 million prescribers, pharmacies, distributors and manufacturers registered, the DEA does not have enough resources to watch them closely. The closed system was made so the DEA could track pills and provide tools to make sure the drugs were not being diverted into the illicit market, Rannazzisi said.

Each registrant in that system has a duty to maintain effective control against illegal diversion, he said — tools were in place to prevent illicit activity, but when they’re ignored, diversion occurs, which comes with issues such as the opioid crisis has brought.

At the questioning of Linda Singer, attorney for Huntington, Rannazzisi said prescription drug abuse has been noticeable since the 1980s and ’90s, at which time the DEA saw patterns of localized crimes, such as pharmacy robberies, prescription scripts forged by drug users and bad doctors. As time turned to the early 2000s, it was not out of the ordinary for a single pharmacy to distribute a few hundred thousand tablets a year, he said, which caused more nationwide problems.

“As we started seeing these drugs more and more, we understood the problem was getting progressively worse,” he said, later adding, “the volume increased dramatically and it switched to hydrocodone.”

By 2004 the DEA was seeing a large volume of opioids coming out of internet pharmacies. Rannazzisi said it allowed people to order drugs “in the darkness.” The pharmacies could be brick and mortar buildings, but could also be run out of someone’s garage, all of which was a red flag.

“It was one of those situations where we were seeing large breaches in the closed system,” he said. “We were watching large quantities of drugs leaving and entering the illicit marketplace. We had to stop it.”

The defense objected to the internet pharmacies being mentioned, stating it was not relevant to the case. The plaintiffs said it showed the DEA had seen bad distribution practices by the defendants before the opioid crisis even started.

The slides included a case from the 1940s in which a direct-sales company was caught advertising and selling large quantities of opiates to physicians in rural areas. They continued to sell them until the Supreme Court ruled they should have known the doctors did not need the large amount of pills for legitimate purposes and should have stopped the shipments.

Rannazzisi said it included that information to show even 60 years before the presentation the distributors had a duty to ensure customers were not diverting drugs into the illicit system.

After the meetings, the DEA received voluminous reports from the distributors about their sales to specific pharmacies. The DEA accepted the reports because it could be helpful, but typically they had no narrative of why the reports were suspicious of what the DEA should be investigating, he said.

If the DEA received “true” suspicious order reports, they would be followed up on, Rannazzisi said.

“All three distributors sent some type of report, but it wasn’t a suspicious order report,” he said.

The defense asked a lot of questions to make a few points: First, Huntington and Cabell County do not run treatment programs, so they cannot ask for money to run them; second, most of the services are paid via Medicaid and private insurances; and third, necessary treatment programs are already in place and places such as Proact, a recovery hub in Huntington, cannot stay at capacity, so additional programs are not needed.

O’Connell said each treatment program in the area was created out of need, without which they would not be operating.

Defense attorney Timothy Hester also argued recovery programs are receiving millions of dollars in grants each year. In discussing the grants Marshall Heath receives to run its programs, O’Connell estimated it had received an estimated $8 million. However, a report from the West Virginia Center on Budget and Policy estimated the addiction epidemic cost the state $11.3 billion in the same year.

Anne McGinness Kearse, attorney for Huntington, said the city and Cabell County were highly involved in bringing together the different businesses and programs to help create the “City of Solutions,” a guide put together to detail the pathway to recovery from the opioid crisis via a joint effort.

She said there are several programs that currently need or will need to receive funding from the city and county to operate, such as the city’s Compass program for first responders, county’s Quick Response Team and Cabell-Huntington Health Department’s harm reduction program.