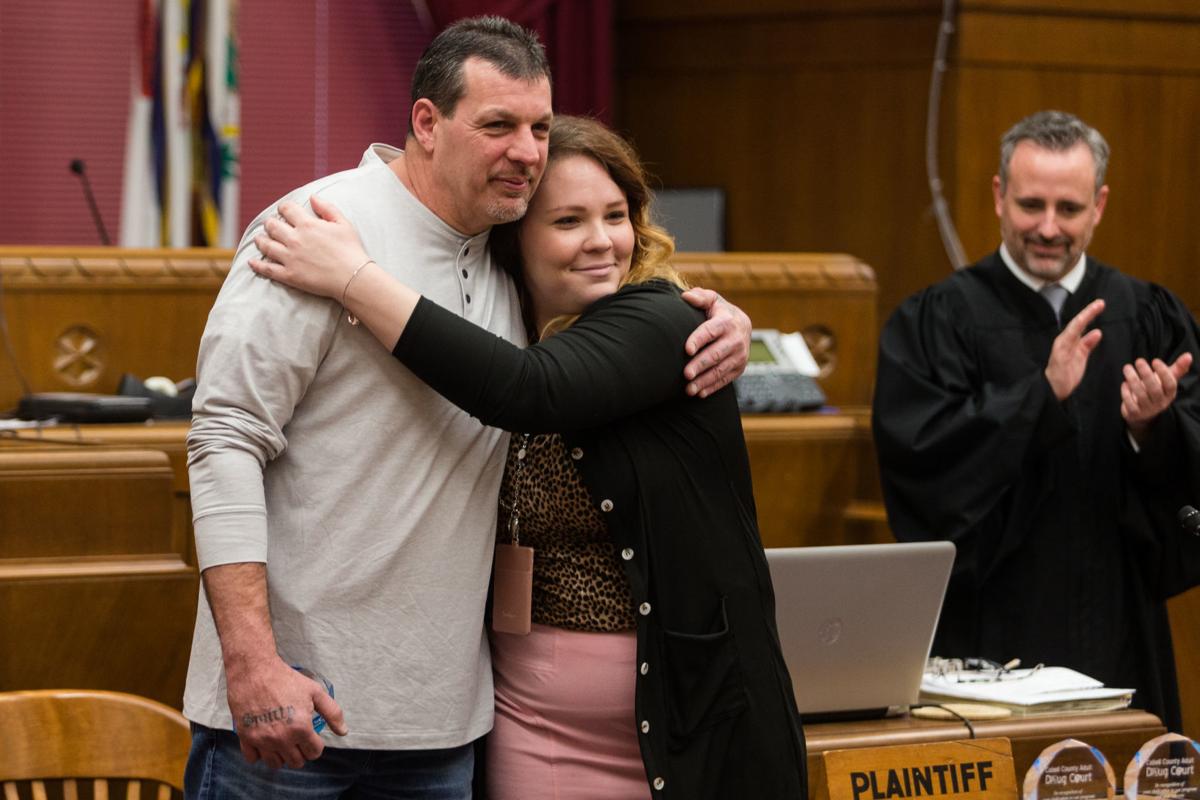 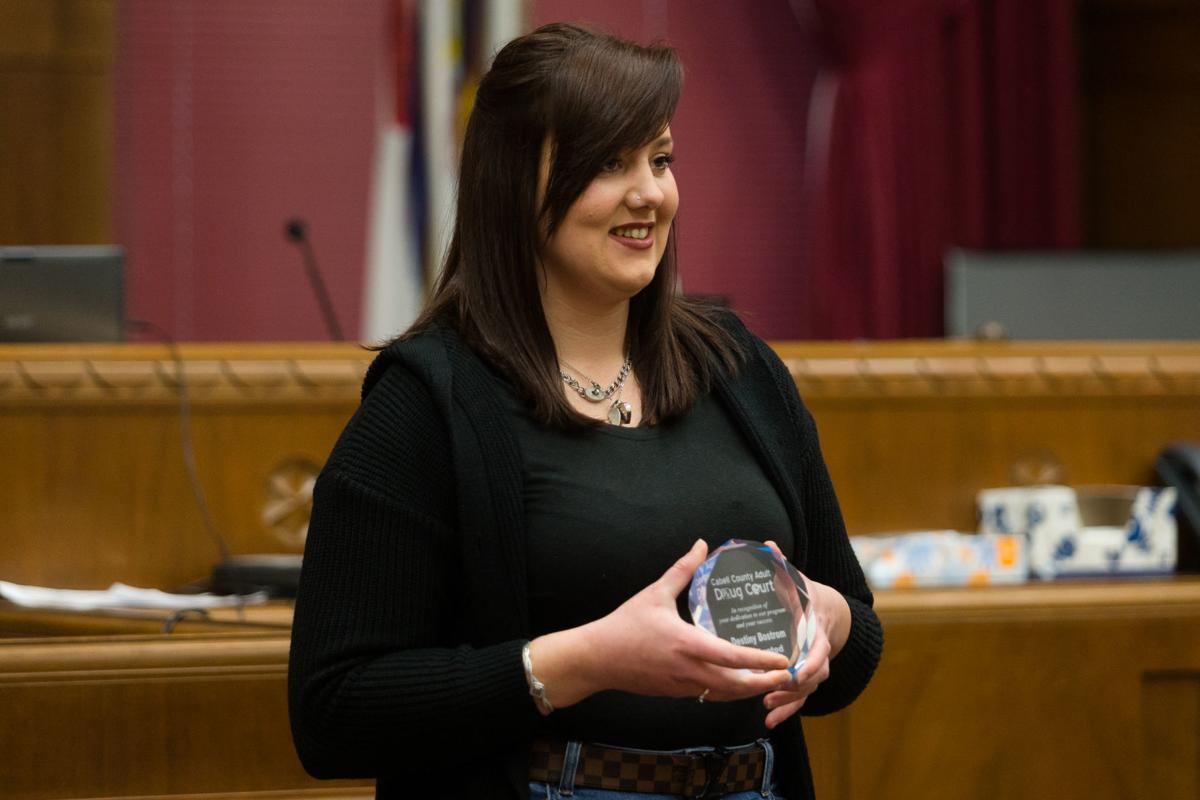 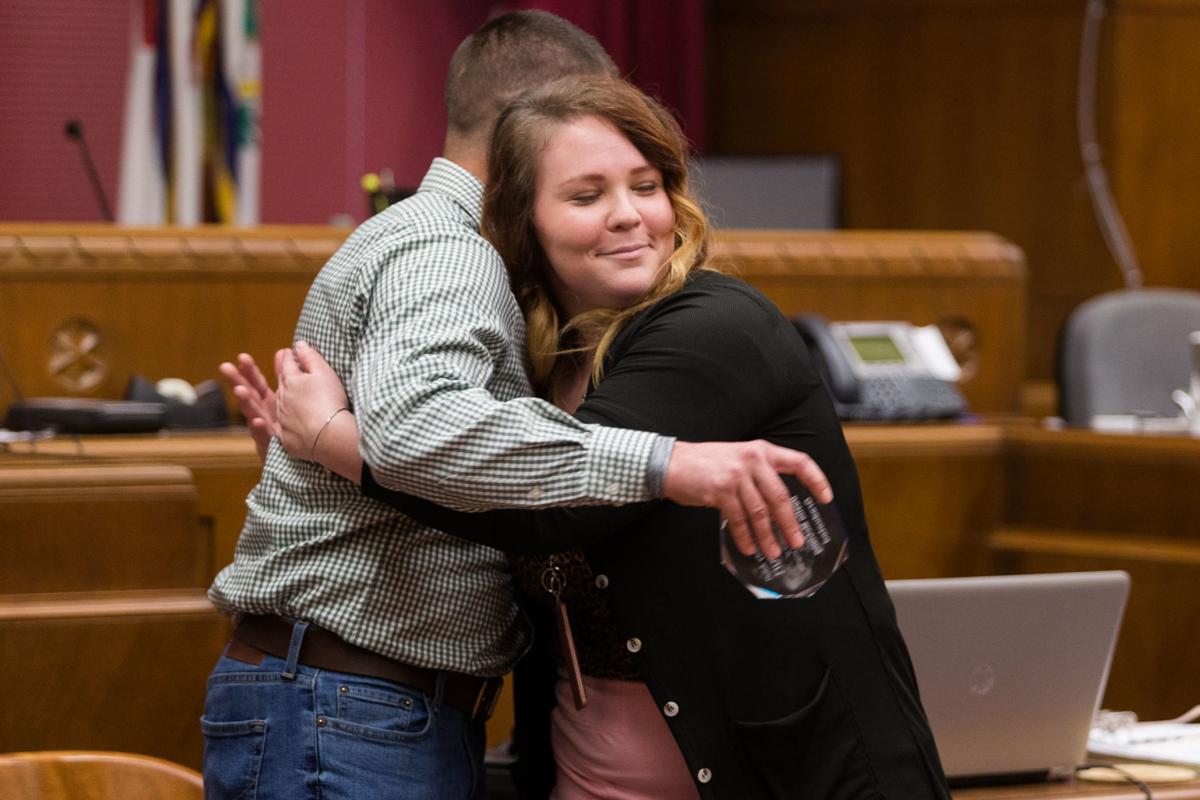 Drug court graduate Dustin McClung, from left, gets a hug from his probation officer Lauren Dodrill as the Cabell County Drug Court graduates six people on Monday, February 10, 2020, in Huntington.

Drug court graduate Dustin McClung, from left, gets a hug from his probation officer Lauren Dodrill as the Cabell County Drug Court graduates six people on Monday, February 10, 2020, in Huntington.

HUNTINGTON — It was an emotional day for 25-year-old Huntington resident Destiny Bostrom, who was recognized Monday afternoon for completing Cabell County Drug Court.

“This is absolutely amazing; this is honestly the only thing I have ever graduated in my life,” said Bostrom, who recently celebrated 13 months sober. “My life now makes me realize that I will never go back to what I was, and how proud people are of me, and the way people view me now versus when they did before is a complete 180.”

Bostrom is one of six members of drug court who were recognized at the Cabell County Courthouse for completing the program. The others also shared how the program has helped them change the course of their lives.

Cabell County Circuit Court Judge Greg Howard, who supervises the Cabell County Adult Drug Court, sees the results from his perspective. He noted that the graduation ceremony is encouraging to those who work with the participants.

“We get to see folks like this who came in kind of rough, struggling in addiction, had their own set of issues,” Howard said. “Then we get to see this polished product that is coming out the other end of drug court.”

Drug court is an intensive addiction treatment program used as an alternative to jail time for those who qualify and are willing to participate. It requires at least a year of random drug screenings, group and individual therapy sessions, weekly court hearings, regular employment and overall lifestyle changes.

All of the graduates had their own takes on what allowed them to succeed and the gratitude they felt for progressing through the program.

Gaduate Cassandra Wilson cited her daughter and the rest of her family for the support she received throughout the drug court process.

“This program really works, and I want to thank the whole drug court team. I don’t think I’d be here today if I didn’t go to jail,” Wilson said. “I’m just glad that I actually am here today.”

Multiple Huntington police officers attended the ceremony, and graduate J.J. Scarberry thanked them for treating him with respect when he was at his lowest point.

“I want to thank my arresting officers, because they put up with a lot with me and never once treated me like I was beneath or like I was a horrible person,” Scarberry said. “They actually helped, believe it or not. It opened my eyes that somebody that didn’t even know me believed in me when I didn’t believe in myself.

“This program is awesome, it changed my life for the better.”

Graduate Matthew Smith said drug court helped him reach his potential and get away from a life of substance use and prison time.

“I’m in a better place today than I’ve been in a long, long time, and for that I’m just thankful,” he said.

Some graduates offered a piece of advice for new drug court participants in attendance, as well.

“I didn’t want to be here, this was the last place I wanted to be, and I didn’t want to go through this, but sometimes it’s not always want you want, you get what you need,” Jeremiah Gaither said. “What I would say to the newcomers in this program is just wake up every day and challenge yourself and take a chance to change.”

For graduate Dustin McClung, drug court gave him a fresh start after more than 10 years of struggling with substance abuse.

“I came into this program and I was completely and totally hopeless,” McClung said. “Drug court actually changed that. I have a utility bill for the first time in my life in my own name, I pay my own rent and I’ve never done that, I always relied on my family and other people. This has all been such a humbling experience for me.”

Cabell County Drug Court is the largest in the state, Howard said, with anywhere between 55-60 people at any given time.

“It’s a pretty massive machine,” he said, “and it works really well.”

"It opened my eyes that somebody that didn’t even know me believed in me when I didn’t believe in myself." - J.J. Scarberry, drug court graduate