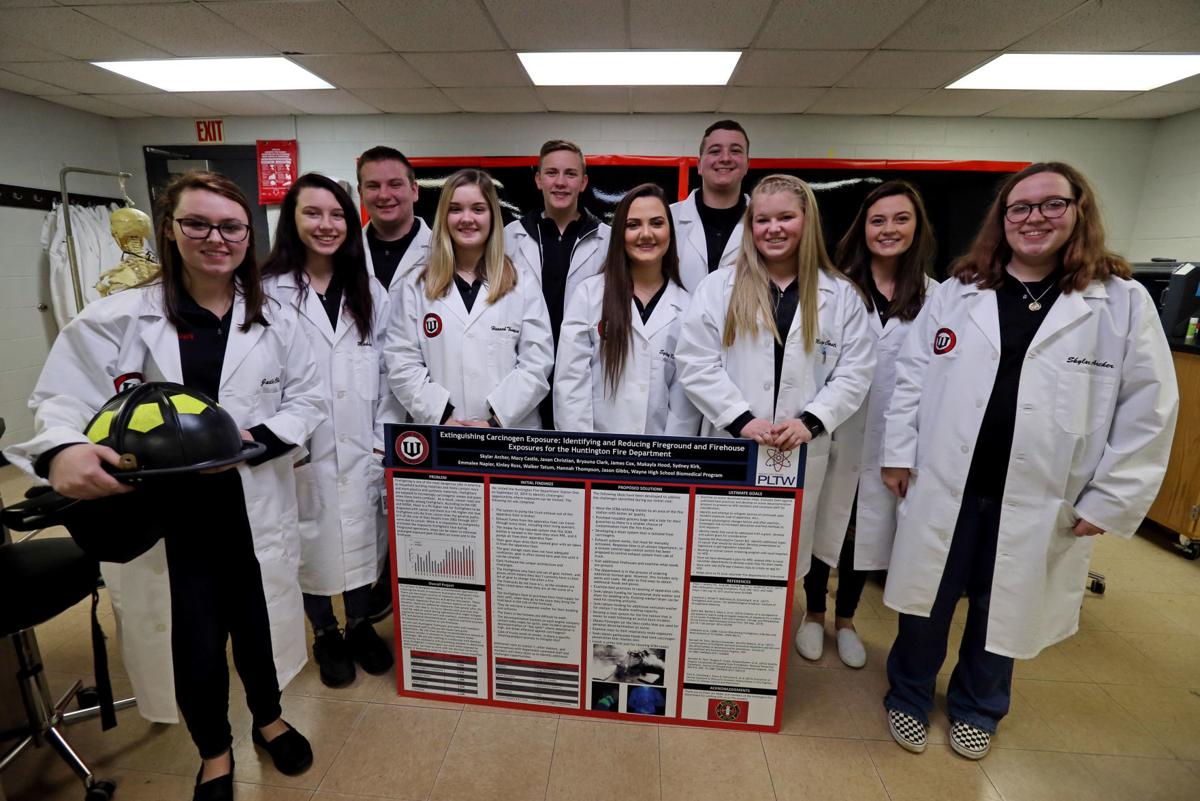 Wayne High School biomedical students were selected as one of 100 classes nationwide to advance in the Samsung Solve for Tomorrow competition, the only school in West Virginia to be awarded this title. 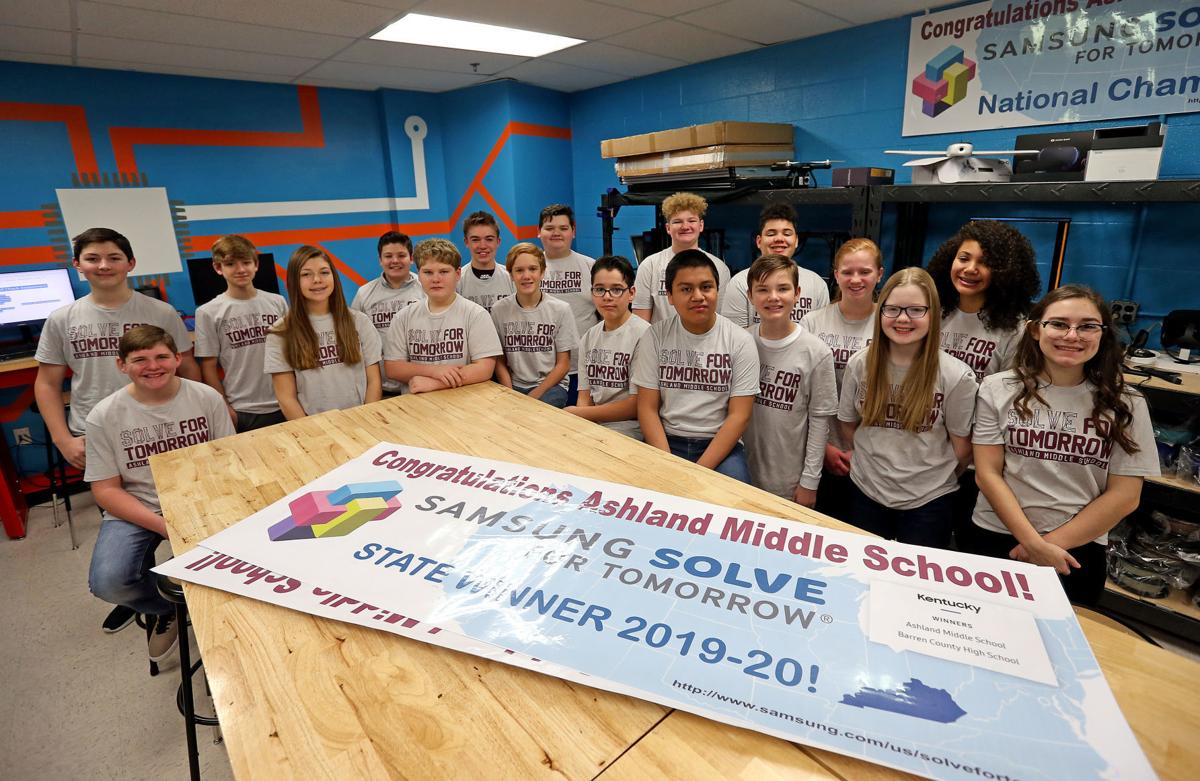 Because of their unique solution to inspire change, Ashland Middle School has been named a Kentucky state winner in the Samsung Solve for Tomorrow contest.

Wayne High School biomedical students were selected as one of 100 classes nationwide to advance in the Samsung Solve for Tomorrow competition, the only school in West Virginia to be awarded this title.

Because of their unique solution to inspire change, Ashland Middle School has been named a Kentucky state winner in the Samsung Solve for Tomorrow contest.

WAYNE — The first PLTW Biomedical Program in West Virginia at Wayne High School has made history again, becoming one of 100 classrooms nationwide to advance to the next round in Samsung’s Solve for Tomorrow contest for their efforts to limit Huntington firefighters’ carcinogen exposure.

The program, consisting of nine seniors and one junior, will represent the state in the contest, which encourages schools to use science, technology, engineering and math skills to tackle a problem in their community, taking home $15,000 in technology for their classroom and competing for additional prizes of up to $100,000.

However, it’s not about the awards or prize money for the Wayne High School students — it’s about saving lives and creating a tailored plan of action for the Huntington Fire Department.

“Our project leader, his dad was a firefighter — he’s retired now — and that’s how we got the inspiration for this project,” Hannah Thompson, a student in the biomedical program, said. “We wanted to lower the risk for people who are doing it now.”

Class instructor Jason Gibbs expressed his concerns about his father’s exposure to cancer-causing chemicals to members of the group last summer, and the students decided to launch an independent research study on the topic.

“We sat down and said, ‘What can we do?’ They started doing literature review and reading all these scientific papers, 50 or 60 altogether, to get the background, and now they have about five different ‘buckets’ of ideas,” Gibbs said. “One is the firehouses, which were built before they realized this was a big issue. They’re going to try to retrofit the old firehouses to have a red zone, green zone and yellow zone to mitigate where carcinogens spread.”

A contact at the Joan C. Edwards School of Medicine made the group aware of the Samsung-sponsored contest, and the students and Gibbs agreed the project would be a good fit for an entry.

While Gibbs is available to the class for guidance and to help facilitate needs, he said the students have done the work completely on their own.

“To be high school students and to make an impact on something that’s easily overlooked is something that we are very grateful to be able to be a part of,” student Walker Tatum said. “We just really hope that we can bring awareness to this and people can understand that it’s something that’s a lot more serious than people lead it on to be.”

The students have visited several Huntington Fire Department locations while conducting research, and said they want to bring more attention to the well-being of first responders.

“Their focus on the job is the fire. They’re not focused on doing certain things to reduce their risk of exposure because they’re thinking, ‘I need to be ready for the next fire,’” Thompson said. “So we would like to help them and develop some procedures that work for them better and help minimize their risk.”

The class will now begin preparing for the next step in the competition, creating a 3-minute video demonstrating the project and their research, and watching it come to life.

“I think the main reason this has worked is because it’s real,” Gibbs said. “This affects somebody’s life. If it helps one person avoid some form of cancer, then that’s huge. We’re just excited to see what comes next.”

The Wayne students aren’t the only local students competing for this national prize. At Ashland Middle School, students are also putting their STEM skills to the test, advancing in the same Solve for Tomorrow contest for the third time in three years.

The students in Ashland Middle’s Solve for Tomorrow class were chosen as one of two state winners in Kentucky, and one of 100 winners in the country; in 2018, the school took home the grand-prize national title.

They have been awarded $15,000 in technology through Samsung as state winners and will now take their pitches to the next level, competing to win up to $100,000 in advanced equipment and classroom materials.

The class has been working to solve a problem that affects students not just locally, but at schools everywhere — the exit protocol for mobility-impaired children in the event of an emergency at school.

“The previous solution wasn’t very efficient,” said student Riley Gussler. “You have to leave those students in a safe room, and in the amount of time a first responder would take to get here to get them out of that area of the building, smoke can get into your lungs, and that’s not really a solution.”

The students working on the project received guidance from instructors John Leistner, Mark Harmon and David Sparks, who introduced the issue to the class by taking them to the top of the stairwell on the second floor of the building and asking, “What now?”

“I think you kind of saw it from the eyes of the student,” said student Emily Aliff. “You’re standing there, thinking about if you were in a wheelchair, what would you do?”

The students immediately got to work researching, and after discovering that the average student can evacuate the building in 2 to 3 minutes in the event of an emergency and those who are mobility impaired may be trapped in the building for 10 minutes or more, they eventually developed a plan of action.

“We’re creating an app that will have a list of everyone who uses the elevators at the school and the time period they’ll be using it and their schedule, so that if there was an emergency situation we know exactly where they should be in the building,” Aliff said. “We’re also trying to create a prototype that will be able to get those students down the stairs in an emergency situation.”

Leistner said the group has dubbed the project “No Child Left Behind.”

“We played on the legislation a couple years ago. We said, ‘Wait a minute. We have children that get out of our building in less than 3 minutes, while others can sit here for 10 or longer,’” Leistner said. “We don’t want to leave any child behind.”

The project aims to help students, but also prevent firefighters from having to enter a burning building.